Nah or Aww? Human-Size Penguins Once Waddled Across New Zealand

A fossil discovery has added another entry to the list of comically large New Zealand birds: a 5-foot-tall penguin.

Just last week, we reported that researchers found fossil evidence of a child-size parrot in 16-million-year-old rock. Some of those same researchers have now announced the finding of a penguin that could have grown over 5 feet tall and weighed over 150 pounds, according to a press release from the Canterbury Museum. For comparison, today’s emperor penguins can grow to 4 feet. These ancient penguins might have grown to a larger size for different reasons than New Zealand’s other giant birds.

“A very large size... is likely to have been due to inter- and intra-specific competition for breeding sites and food resources on land and in the sea,” the authors write in the paper published this week in Alcheringa: An Australasian Journal of Palaeontology. 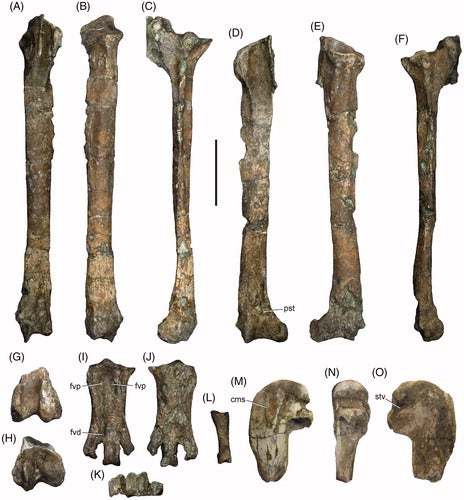 Amateur palaeontologist Leigh Love found the fossil specimens in a rock formation on the side of the Waipara River on New Zealand’s South Island in 2018, according to the press release. The find consisted of leg bones, as well as potential flipper bones, whose shape didn’t seem to fit with various other species of large penguin that researchers have found in the past. They tentatively named the bird Crossvallia waiparensis, assigning it to the Crossvalia genus of another large penguin and the name waiparensis from the Waipara river.

The shape of the leg bones differed from those of more recent penguin species, according to the paper, suggesting to the researchers that these birds might have been stronger swimmers or hadn’t yet adapted an upright stance.

C. waiparensis isn’t just big; it’s also old, among the oldest of penguins—and penguins are already among the oldest modern birds. This fossil confirms that penguins developed their giant size early during their evolution, according to the paper, and demonstrates that New Zealand was likely a hot spot for penguin species during the Paleocene period that followed the extinction of the non-avian dinosaurs.

Along with last week’s enormous parrot, this mighty penguin is yet another reminder that prehistoric New Zealand was a fantasy land with some delightfully strange creatures.