The Curiosity team is calling it “Strathdon”—a boulder-sized Martian rock comprised of dozens of sedimentary layers. Its discovery suggests the area being explored by the NASA rover is more geologically complex than is typically appreciated.

For the past several months, Curiosity has been exploring a region called the “clay-bearing unit” within Gale Crater. This area, located along the slope of Mount Sharp, once featured lakes and streams, the remnants of which now appear in the form of clay mineral deposits. By exploring this region, scientists are hoping to catch a glimpse of Mars’ ancient past, when the Red Planet was able to maintain liquid water on the surface—and possibly even life.

Recently, the NASA rover came across a large rock comprised of dozens of sedimentary layers. Dubbed “Strathdon” by the Curiosity team, the brittle rock looks like a gigantic chunk of baklava, with its tiered, wavy rows. These features, according to NASA, point to the presence of a dynamic environment, in which wind or flowing water—or possibly both—imbued this Martian region with its distinctive geological features.

“We’re seeing an evolution in the ancient lake environment recorded in these rocks,” said Caltech’s Valerie Fox, a co-lead investigator for Curiosity’s clay-unit campaign, in a NASA press release. “It wasn’t just a static lake. It’s helping us move from a simplistic view of Mars going from wet to dry. Instead of a linear process, the history of water was more complicated.”

The boulder-sized “Strathdon,” as imaged by Curiosity’s Mastcam. (Image: NASA/JPL-Caltech/MSSS)

On 9 July 2019, Curiosity took a photo of Strathdon using its Mastcam (above). NASA adjusted the image to show how the rock and sand would appear under normal daylight conditions on Earth.

A second photo (below) taken a day later with the rover’s Mars Hand Lens Imager (MAHLI)—a camera affixed to Curiosity’s robotic arm— showed the rock at a distance of 10 centimetres (4 inches). 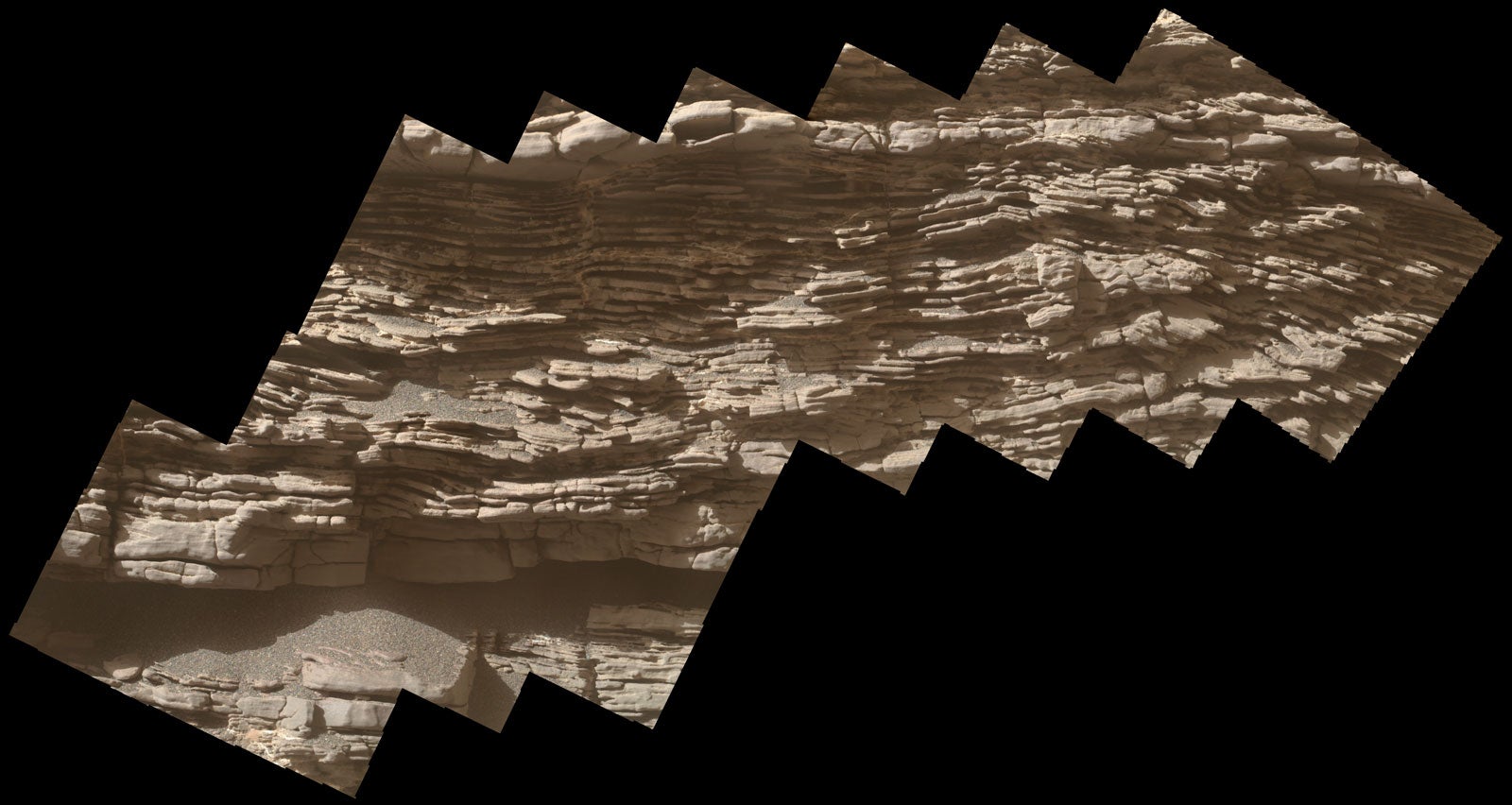 A few weeks earlier, while Curiosity was exploring a region within the clay-bearing unit, the rover stopped to take a 360-degree panorama as it stood next to a rocky outcrop named Teal Ridge. The image was taken on 18 June and was also colour corrected to show the scene under Earth-like lighting conditions.

Incredibly, after seven years on Mars, Curiosity is still uncovering new and unexpected things. Its nuclear power system should last a few more years, so we can happily anticipate many more discoveries in the future. Excitingly, we’ll soon have another rover working on the Martian surface, with the development of the still-to-be named Mars 2020 rover progressing nicely.