Sennheiser has spent years teasing its first-ever home audio product: the Ambeo soundbar. This hulking all-in-one home audio system is designed to deliver surround sound without the need for satellite speakers or extra wires. Well, we’ve spent the past few weeks testing out the £2,200 device, and it certainly is an exciting piece of hardware. But it’s also exasperating.

To understand what makes the Ambeo soundbar special, you need a little bit of the backstory of Ambeo 3D Audio from Sennheiser. The company started slowly rolling out Ambeo products back in 2017, starting with the wacky-looking Ambeo VR Mic which is designed to be a single microphone for capturing immersive spatial audio. Then came the Ambeo Smart Headset which is essentially earbuds with built-in omnidirectional microphones so that you can record the sound you’re hearing around you. The Apple Store sells them now. Sennheiser also made a version of these earbud microphone things for developers building augmented reality apps, and you can buy those bundled with Magic Leap headsets.

What is it?: A soundbar with surround sound
Cost: £2,200
Like: Incredible sound quality, huge sound stage
Don't like: Not quite as good as proper surround sound

This is all to say that Sennheiser’s ambitions for Ambeo so far seem vaguely futuristic and a little bit confusing. Best as I can tell, Sennheiser is using its deep expertise in making microphones to find new ways to record and deliver “3D audio,” a jargon-y phrase that means different things to different people. For reference, here’s Sennheiser’s definition from the Ambeo Soundbar press release: “The Ambeo Soundbar delivers 3D sound that blurs the line between playback and reality from a single all-in-one device.”

In other words, the technology is supposed to deliver a 5.1.4 surround sound experience, complete with a height dimension powered by Dolby Atmos, without the need for satellite speakers. In past demos I’ve experienced, Ambeo Soundbar prototypes did that, creating the impression that aeroplanes on a screen were flying right above me and raindrops were falling behind me. It blew my mind at the time.

The production model Ambeo Soundbar we’ve been testing, however, left me weirdly underwhelmed. Don’t get me wrong! It’s an amazing soundbar that is also enormous. The thing is stuffed with 13 drivers. There are six long-throw woofers, five one-inch tweeters, and two 3.5-inch mid-range drivers that fire upwards. All that comes in an enclosure that’s 50 inches long and, inconveniently, six inches tall. That means if you plan on putting the Ambeo Soundbar in front of your TV, your TV better be mounted because otherwise, the soundbar will obscure part of the screen. That said, I’d expect most people who want to buy a $2,500 soundbar would have the means to move their TV if need be.

Aside from many fancy drivers, the Ambeo Soundbar is also full of fancy features you don’t see in many other soundbars. It has Bluetooth and Chromecast built-in which makes the Ambeo Soundbar handy for music. There are also four HDMI ports, one of which is an eARC port which offers more bandwidth for high-quality audio like Dolby True HD and Dolby Atmos, both of which are supported by the Ambeo Soundbar. The new eARC standard, which is only supported by a few TV models, also makes lip-sync correction mandatory. The Ambeo has a well documented lip-syncing problem. I noticed the latency issue when sending audio to the Ambeo Soundbar directly from the TV I was using for testing, a brand new Vizio P-Series Quantum X. I also noticed that the virtualised surround sound wasn’t exactly surrounding me. The Vizio TV does not support HDMI eARC—very few TVs do—so I wasn’t getting the full Ambeo experience. I did manage to fix the lip-syncing problem by running audio directly from my Blu-ray player, an Oppo UDP-203, to the soundbar with an HDMI cable. That also seemed to improve the surround sound, but none of it really mattered because I almost never want to use my Blu-ray player over a streaming service these days.

This is where my enthusiasm for the Ambeo soundbar started to falter. Deep in the user manual, Sennheiser says that connecting the Ambeo Soundbar to a TV that lacks eARC output means the soundbar “can transmit surround formats only to a limited extent.” I’m left to wonder if the latency issue might also be related to the ARC vs. eARC problem, though I’ve also read that others have had lip-sync problems through optical audio connections. (It’s also possible that Sennheiser could fix this glitch with a firmware update.) The fact of the matter is that I wasn’t able to test the Ambeo Soundbar on a TV with an eARC output, so I can’t exactly know what I was missing. I couldn’t get the full experience without buying a new TV. By the time I figured all this out, I just wanted to cry, because I was so excited about getting my mind blown again, but it just wasn’t going to happen. Again, the Ambeo is a remarkable soundbar. Watching movies with it felt nothing short of theatrical with rumbling bass response that you typically only hear from a dedicated subwoofer. There’s also brilliant detail in the mid- and upper-ranges that is impressively specific in a spatial sense. The Ambeo Soundbar easily delivered the best sense of height I’ve ever experienced with Dolby Atmos content, when I was able to find it. The proper setup with the Blu-ray player sending audio directly to the Ambeo Soundbar also offered a huge sound stage. It’s easily one of the best soundbars I’ve ever heard. But still, there are some frustrating shortcomings in the 3D audio experience Sennheiser promises with the Ambeo Soundbar.

I’m just not convinced that the Ambeo Soundbar truly sounds as immersive as a 5.4.1 surround sound system, if only because Sennheier says you need a very particular setup to get the full experience. Delivering surround sound without surround sound speakers is an admirable, forward-thinking goal. However, it seems like the world isn’t quite ready for the Ambeo Soundbar. Not only is it still challenging to find the Dolby Atmos content that can offer the full 5.4.1 experience, but it’s also hard to find a TV that supports an eARC connection. Even if you do, I can’t say that the lip-syncing issue will go away, because I wasn’t able to test the Ambeo Soundbar in the ideal setup.

So with all of the surround sound content I used in my testing, including the Dolby demo disk included with the Ambeo Soundbar, it never really felt like I had a couple of satellite speakers behind me. The Sennheiser soundbar did an admirable job creating a massive soundstage with its undeniably massive soundbar. The dimension of height with the Ambeo Soundbar is definitely impressive, too, especially for the form factor. But I never felt like the sound was coming from behind me, and replicating those satellite speakers seems like it would be the toughest part of putting a 5.4.1 surround sound system in a single soundbar. I just don’t quite think the Ambeo Soundbar can pull it off with most people’s home cinema setups. 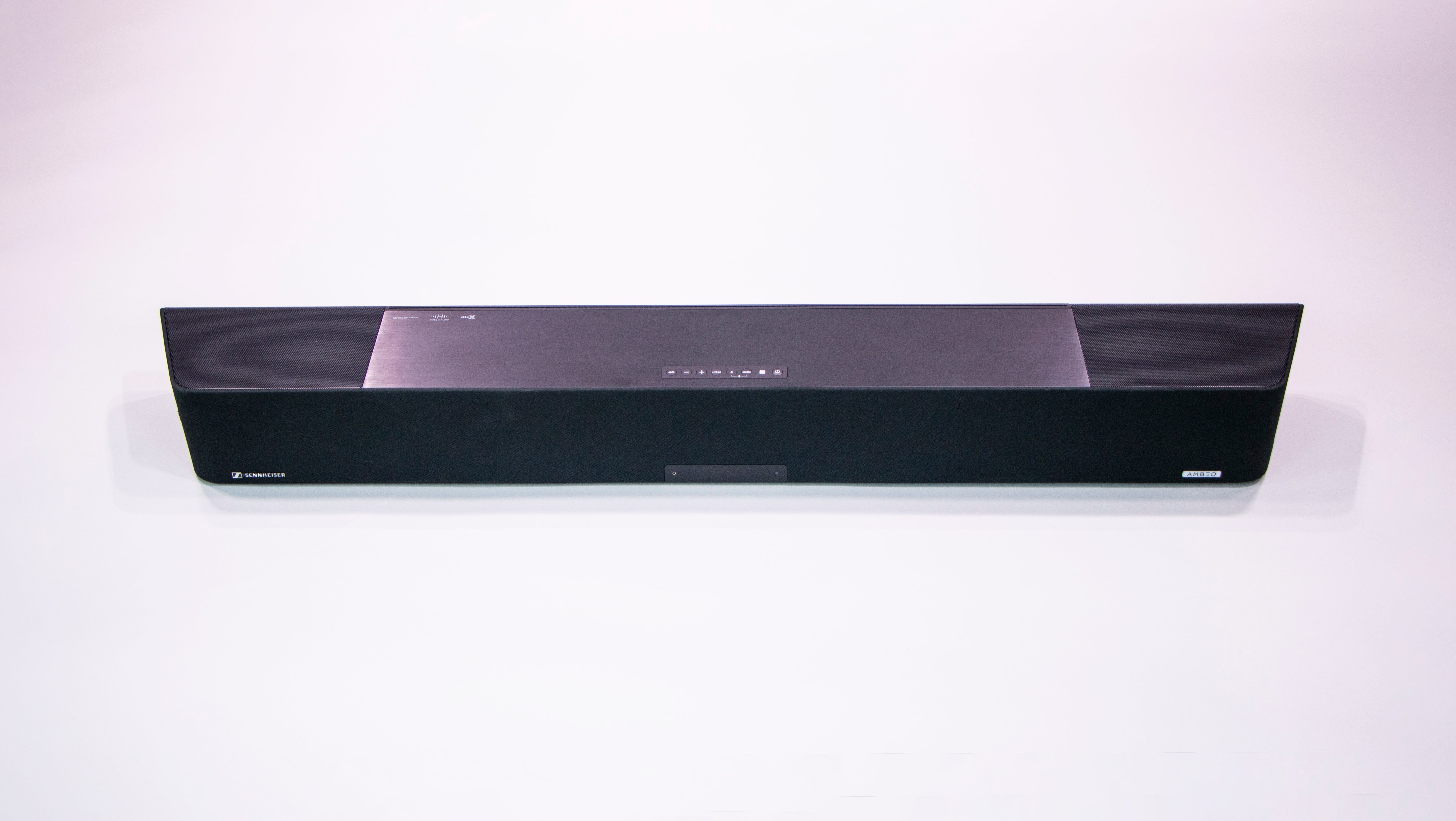 Maybe there’s a bright side, though. If you wait a year or two before buying a new TV with an eARC output, there’s a chance that the Ambeo Soundbar will have dropped in price! At its current £2,200 price point, it’s clearly geared towards sophisticated consumers, and hopefully, those are people who know the difference between HDMI ARC and HDMI eARC and who are have a massive Blu-ray collection so that they can get the very best performance out of the Ambeo Soundbar.

The Ambeo Soundbar is not a great choice for the average human who wants to experience surround sound with Dolby Atmos. Again, it’s a great soundbar, and it should be for that high price. But right now, you can get an amazing experience from a much more affordable surround sound system. Vizio sells a great Atmos-enabled system for £600. Consider buying one of those for every room of the house and avoiding the frustration of Ambeo’s so far unfulfilled promises.