Captain Phasma is essentially the Boba Fett of the Star Wars sequels. She exists to be a very cool character design that can sell a lot of toys and can never live up to the hype of that design, narratively speaking. She, also like Boba Fett, has gone on to have a much more explored backstory within tie-in fiction to fill the void the films left behind. She, unlike Boba Fett, has taken a much more interesting path in the process.

The approach Star Wars media took to Fett’s void was to make him an absurdity, a legend that could live up to Star Wars fandom’s reaction to his design—one that answered his mystery with a reality bordering on the comical. He was the most deadly Bounty Hunter in the galaxy, hired for the worst jobs, the best jobs, and everything in between. He was playing every side he could, a crack shot, a keen eye, a master strategist. He ultimately even became the arbiter for Mandalorians as a whole, despite not actually being one. The legend of Mandalore, of an entire planet and culture, was birthed by a man in a mask whose primary cinematic spotlight was careening cool-helmet-first into the side of a pleasure barge.

He was Batman with a shorter cape, a jetpack, and similarly dead parents. 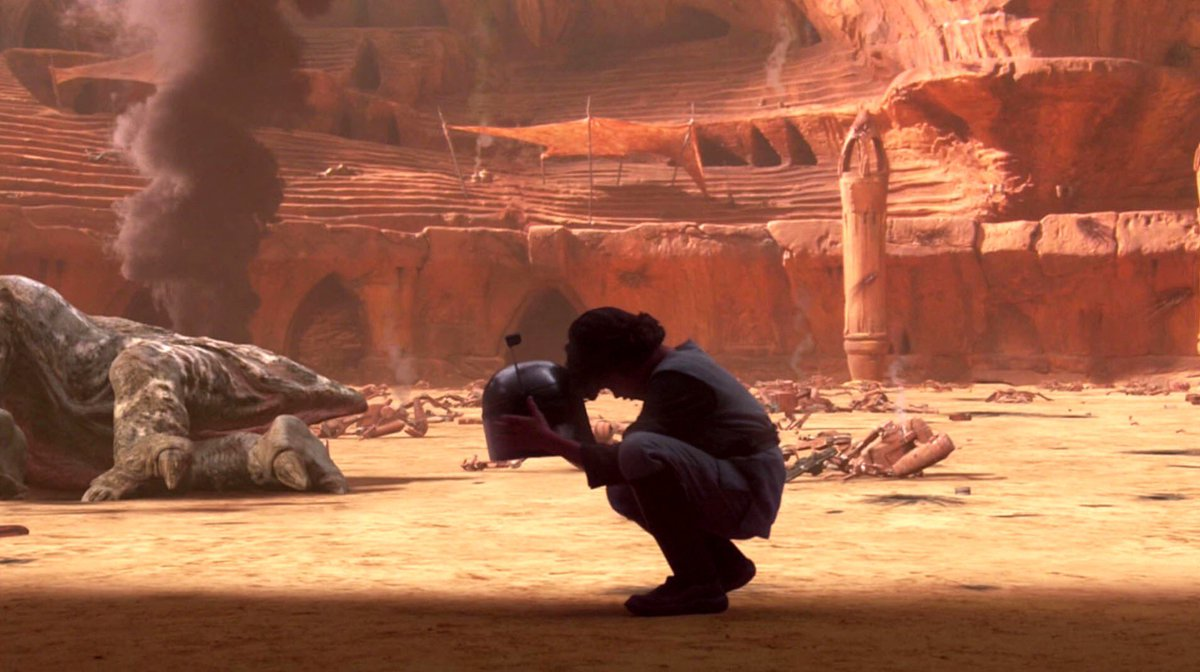 Compared to Fett and the old Star Wars expanded universe (where it could feel like every other story was about the unstoppable legend of Fett, or if it wasn’t, that he could show up and be involved at any time just because), Phasma has yet to really have much of Disney’s tie-in media dedicated to her. It’s mostly in the form of two separate Marvel Comics—a four-part miniseries by Kelly Thompson, Marco Checchetto, Andres Mossa, and Clayton Cowles exploring how Phasma survived her first seemingly unsurvivable death; and more recently a one-shot standalone from Tom Taylor, Leonard Kirk, Cory Hamscher, Guru-eFX, and Travis Lanham as part of Marvel’s ongoing Age of Resistance series—and a novel by Delilah S. Dawson.

In part, these stories began to paint a picture of Phasma that is not unlike Fett’s grandiose badassery. Sweeping comic book panels portray a fearless leader on the front lines, shouting rallying cries as she carves the Star Wars equivalent of a bloody path (thank god for those cauterising blaster bolts) across battlefields. They portray a woman with so much ruthless, calculated efficiency that she can escape from a trash compactor on an exploding planet in six minutes flat.

Her novel gave her an origin story that, on the surface, is worthy of that image: a Mad Max-ian warrior queen who fought tooth and nail to rise to her position, wrenching herself from a low-tech world to command legions of troops across the stars. If Phasma were truly Fett’s second verse, this would be where all that storytelling stops, in terms of depth. Or rather, it would be where it snowballed into mythos, and Phasma the Image would steadily scrub Phasma the Person away—she would become the symbol so many in the First Order see her as wholly. 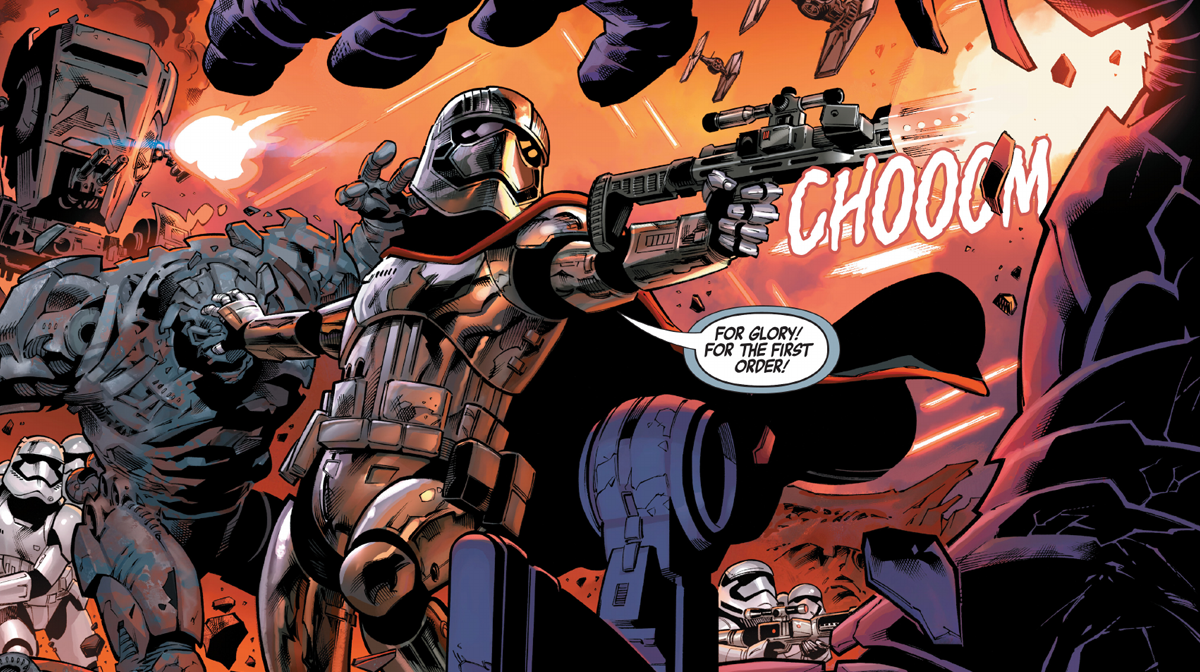 Just because Phasma projects a mythical image of herself doesn’t necessarily mean she’s incapable of actually inhabiting it every once in a while. (Image: Leonard Kirk, Cory Hamscher, Guru-eFX, and Travis Lanham/Marvel Comics)

In many ways, that is the benefit of Fett’s preposterous coolness from Star Wars’ sci-fantasy standpoint of fables and legends. Fett is less of his own character on a micro, individual level, and instead evocative of the totality of scum and villainy in the Star Wars galaxy, in the way that Phasma is meant to become the literal embodiment of a new evolution of the Empire, chrome-plated and glimmering with unsullied potential. You don’t want to be a Bounty Hunter, you want to be the Bounty Hunter. You want to be Boba Fett the Image. It makes sense then, that at least in the run-up to The Force Awakens, this is what became of Phasma, an image to plaster across stationery sets and action figures and roleplay helmets.

But these stories for Phasma have, little by little, also served to scrape away at that easily-marketed image to present a woman who is far more complex than a mere mythos. In fact, in many ways, she’s kind of a disaster, ever chasing to maintain the image her mask projects, to patch up any exploitable flaws in that shiny, blaster-deflecting armour. Flaws that are of her own making, because in actuality, Phasma is a scrappy, desperate—bordering on craven—opportunist; a woman whose all-consuming desire to live to fight another day is only matched by a willingness to kill anyone and anything, regardless of what side they’re on, to make sure she does. 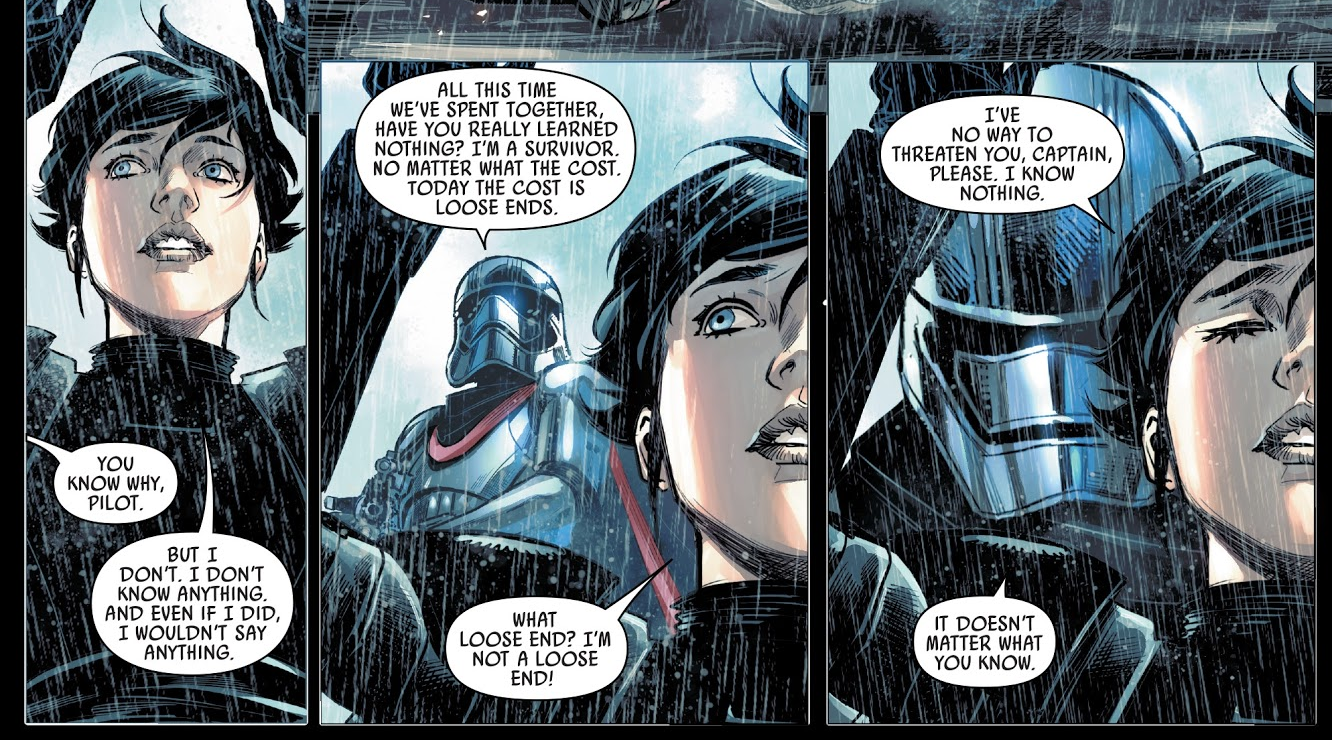 This isn’t necessarily the tale of a coward, like so many Star Wars tales of Imperial bureaucracy before it—stories of people who believe the hype of their own power, only to find themselves incapable of backing it up when their own backs are against the wall. Can she lead those daring frontline charges? Absolutely. But does she need to? Not when there is a charnel house full of willing zealots to be fed into the grinder for her, thanks to the image she has delicately curated for herself her entire life.

Phasma’s story is instead one of an extremely broken and extremely calculating individual. One that has built up this air of mystery around her, but crucially remains aware that it is a falsehood, a tool in her kit like the blaster holstered by her side. She openly admits it, usually before killing off the person she’s just admitted to—living to fight another day, to project the persona. Not for the First Order’s sake, but her own, and her sake alone is all that matters.

It is a fascinatingly dirty story to tell with Phasma as a character—and equally fascinating that it is not the one being told with Fett, a character who has become so representative of the seedy, tricky, manipulative underworld of the galaxy far, far away because of his own larger-than-life legend. 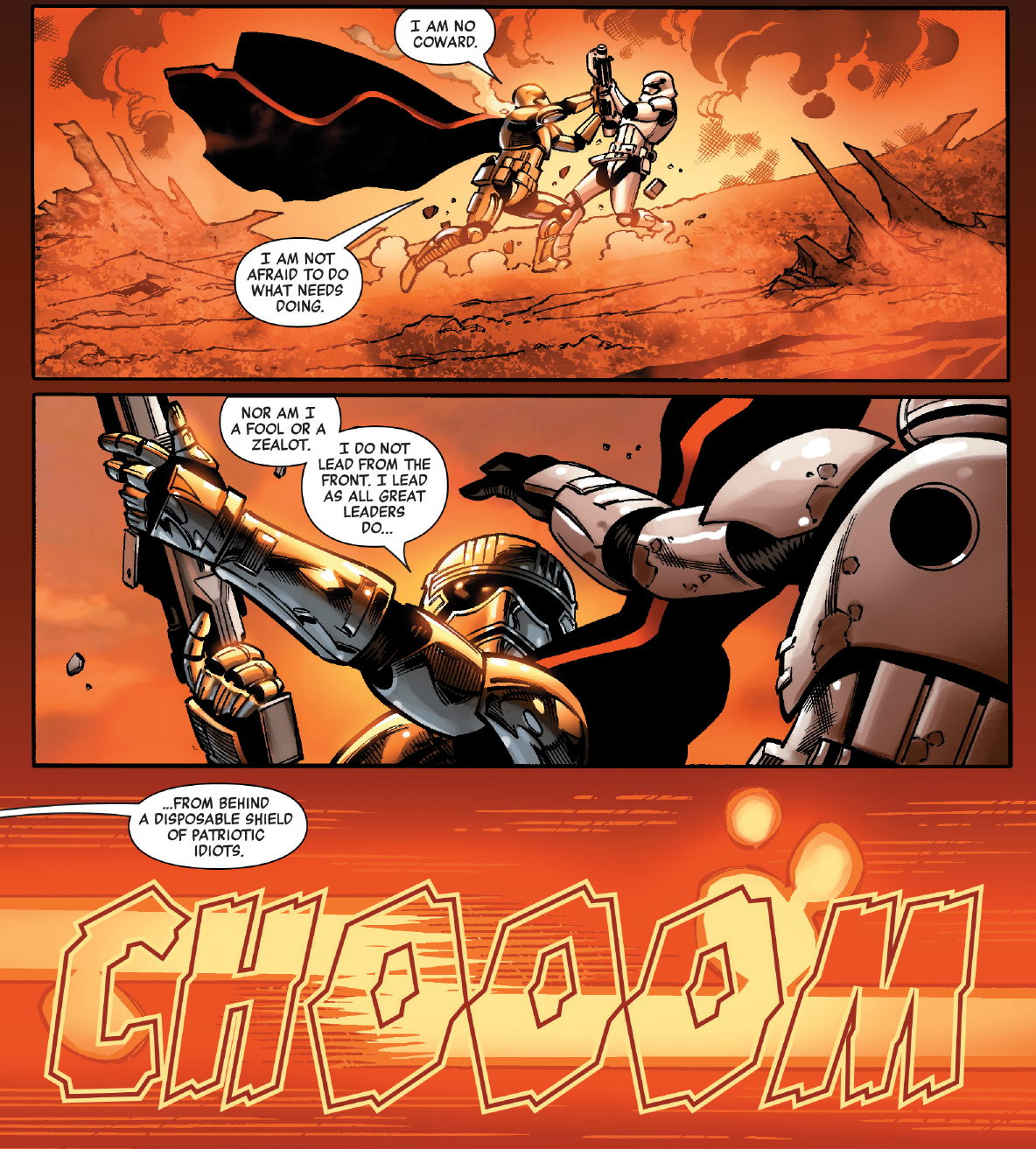 But in doing so, Star Wars offers an inversion on one of its most powerful storytelling tropes: that legends and fables provide hope where the reality around them provides only despair. From tales of ancient Jedi, to Jyn Erso’s rallying cry, to Luke Skywalker’s final trick on Crait, the existence of heroic myth to inspire in times of crisis is what Star Wars is really all about. Phasma’s story instead gives us a myth as a convincing lie, a tool to deceive with for the gain of an individual rather than the gain of a whole.

If Star Wars’ answer to the void behind Fett’s mask was to make a myth worthy of filling it, its answer to the void behind Phasma’s has been to perhaps offer a more bleakly realistic interpretation of it. In order to perpetuate a myth like that in the first place, the person underneath it all has to be much shrewder, much crueller, much more cynical, and much more calculating than you could have expected.