The Westworld Sequel Futureworld Is Low on Killer Robots, But High on Sci-Fi Cheese

Futureworld came out in August 1976. The sequel to Michael Crichton’s Westworld—which tweaks the original’s cautionary tale of technology run wild—hasn’t aged entirely well, especially when compared to the sleek HBO series. But if retro goofiness is what you seek, step right up.

Crichton wasn’t involved in Futureworld; it’s directed by Richard T. Heffron, and aside from stars Peter Fonda, Blythe Danner, and Arthur Hill, the biggest name in its credits is probably co-writer Mayo Simon, who also wrote Saul Bass’ 1974 cosmic ant-colony oddity Phase IV. Fonda and Danner play journalists (Chuck’s a newspaper guy, Tracy’s a TV host) who aren’t exactly rivals, since they work for the same outlet, but they have a past, and spend most of the movie bantering, as if someone thought Futureworld should emulate a 1940s screwball comedy.

That’s just one goofy aspect in a movie that’s overstuffed with them. Futureworld takes place in a world where humans have invented extraordinarily lifelike robots, but, beyond anything Delos-related, contains zero advancements beyond what people really had (typewriters, giant tape recorders, leisure suits, etc.) in 1976.

Suspension of disbelief is necessary if you want to maximise your enjoyment of Futureworld, though finding amusement in its chasm-like plot holes is also an important part of the viewing experience. How else to explain why Delos would be allowed to re-open its theme parks just two years after a robot rampage saw over 50 guests killed, and twice that number of Delos employees killed or injured? Chuck, who’s long been on the Delos beat, gets a tip that something’s not right behind the scenes, but his source is gunned down before he can ascertain exactly what the company is up to this time.

So, naturally, he keeps the murder he’s just witnessed to himself and joins Tracy on a research trip to Delos, accompanying an international array of guests who’re paying $1,200 (£988) a day (the equivalent of around $5,300/£4,367 in 2019) to immerse themselves in Roman World, Medieval World, the New Age-y “Spa World,” or Futureworld. Westworld, for obvious reasons, is no longer in active use. When Chuck and Tracy arrive, the unctuous Dr Duffy (Hill) assures the reporters they’ll enjoy unlimited access for their respective stories, all the better to help further restore public trust in his company. Tee-hee, time to pretend we’re in outer space, while also lurking around after hours to uncover the real dirt!

The audience, of course, is way ahead of Chuck and Tracy; even the Futureworld poster is ahead of them, with its tag line “Is this you...or are YOU you?” heavily foreshadowing a clones-replace-people plot. It’s made obvious in act one, when Delos’ surveillance team starts taking precise measurements of Chuck, Tracy, a Russian general, and a Japanese dignitary as they’re approaching the resort. With any charade of plot tension out of the way early on, the viewer is free to let Futureworld’s unfiltered cheese wash over them.

And, it must be stressed, this is a movie full of cornball elements. Take Harry (Stuart Margolin), a folksy maintenance guy who’s one of Delos’ few remaining human employees. Harry keeps a rigged-together pet robot named Clark (after Clark Kent) in his workshop and goes from “Nuh-uh, I ain’t talking to y’all” to spilling all the beans and ripping off android faces once Tracy tells him he’ll be the star of her TV special if he cooperates. There’s also a classic evil-scientist character, Dr Schneider (John Ryan), who brusquely assures Tracy he’s “not at all” worried about something going wrong at a robot resort that’s run almost entirely by robots, even though it certainly has before.

But the most amazing, jaw-dropping sequence in Futureworld is easily Tracy’s dream sequence, which everyone gets to see thanks to Delos’ dream-spying tech developed for...reasons, and which involves a surreal and (unintentionally?) hilarious tryst with Yul Brynner’s Gunslinger character from the first film. Futureworld screeches to a halt for this interlude, and it goes on forever.

One oft-cited criticism of the movie is that Chuck and Tracy spend a lot of time flailing around underground, in tunnels and so forth, and that’s not incorrect; a New York Times review published 14 August 1976 quoted Tracy’s line “about as exciting as a visit to the waterworks” as a way to describe the whole movie. Obviously, critics back then weren’t going to appreciate the film’s campier touches. But Futureworld does have one actual cutting-edge distinction: its pioneering use of CGI effects.

Technically speaking, its 3D animation is actually limited to clips repurposed from A Computer Animated Hand, a 1972 film co-directed by future co-founder Pixar president Ed Catmull. Still, it’s pretty incredible to see how far CGI has come, compared to this first example from over four decades ago.

By the time Futureworld gets to the inevitable sequence in which Chuck and Tracy must fight their clones, Mr Duffy (who is, SPOILER, secretly a robot) steps in to outline Delos’ nefarious plan to replace world leaders and influencers with duplicates—not robots, but biologically-engineered exact duplicates, complete with Delos-implanted mind control. “Be careful brother, we’re afraid of heights!” Chuck’s double tells him, in an extended brawl that also demonstrates that the Chuck clone somehow has the same woeful shooting skills as the real Chuck.

So the human doubles are just as flawed as the people they’re copying, which I guess makes it easier for them to pretend to be human? If you’re building an army of technologically advanced humanoid pod people anyway, why not just make them super-strong and fearless while you’re at it? 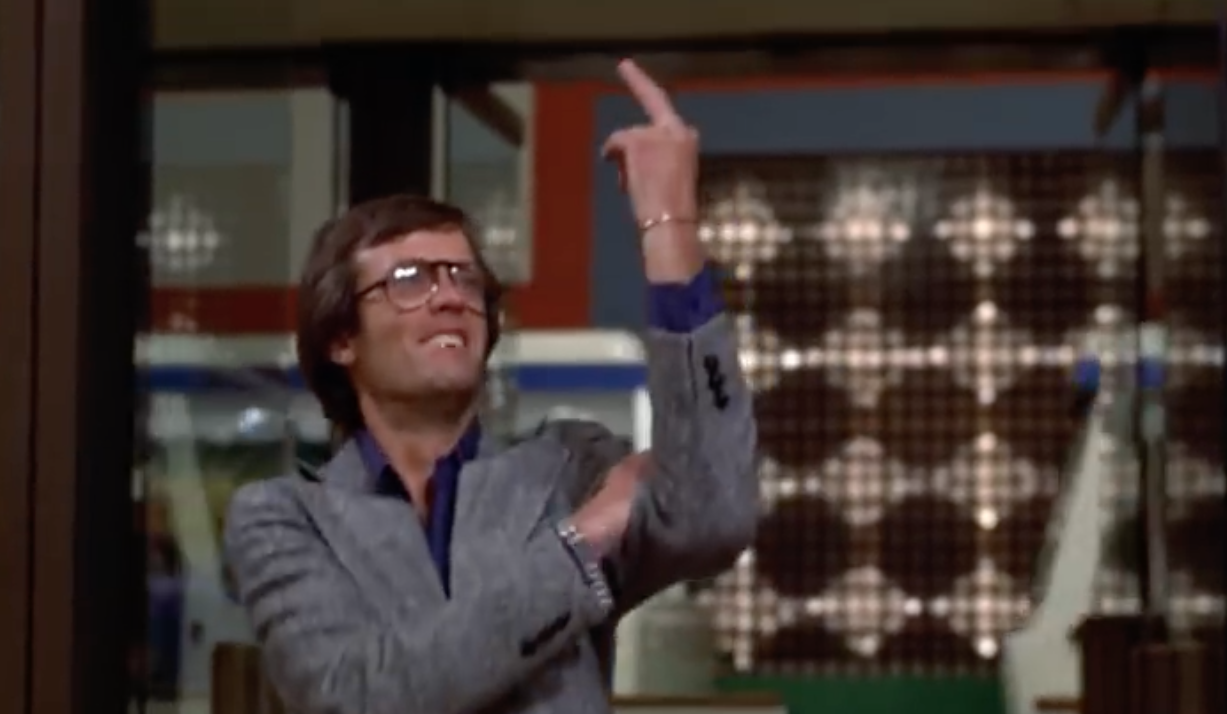 In truth, Futureworld really has no interest in delving into anything below a very superficial level—Chuck’s farewell to the resort, pictured above, might as well be aimed at viewers who are hoping to find answers to any of the questions (both ethical and plot-related) the movie raises, then leaves cheerfully unanswered.

Save your complex theories for the violent delights of HBO’s Westworld, a far more sophisticated exploration of the themes raised here. Futureworld, which does away with its predecessor’s notion of androids gaining self-awareness, instead gets its kicks marvelling at what passed for “futuristic” in 1976: lots of blinking lights, computer screens, hologram chess, meeting the needs of rich people who are obsessed with pretending they’re in the past (or in space, if they prefer), and robot sex. So much robot sex.