Announced when Apple added wireless charging to the iPhone, the AirPower charging pad was never to see the light of day. The company was vague about why the product never panned out, simply claiming it did not achieve Apple’s high standards. Everyone assumed that if a company that spends billions on R&D couldn’t crack the tech, no one could, but it looks like a small outfit has at least come close.

Today a company called Zens, based in the Netherlands, revealed its Liberty wireless power pad featuring 16 overlapping charging coils that allows devices to be placed anywhere on the pad to start the charging process, instead of requiring users to plop their gadgets down on a very specific spot. So did Zens solve a technical hurdle that Apple wasn’t able to? From the looks of it, the answer is: yes and no.

As with the promised AirPower charger, the Liberty uses a series of overlapping and layered coils to provide wireless charging coverage across its entire surface. But unlike AirPower, it’s limited to charging just two devices at a time instead of three. Given a lot of users now carry three devices that can be charged without wires—a phone, wireless earbuds, and a smartwatch—the Liberty doesn’t quite deliver on all of the AirPower’s lofty promises. 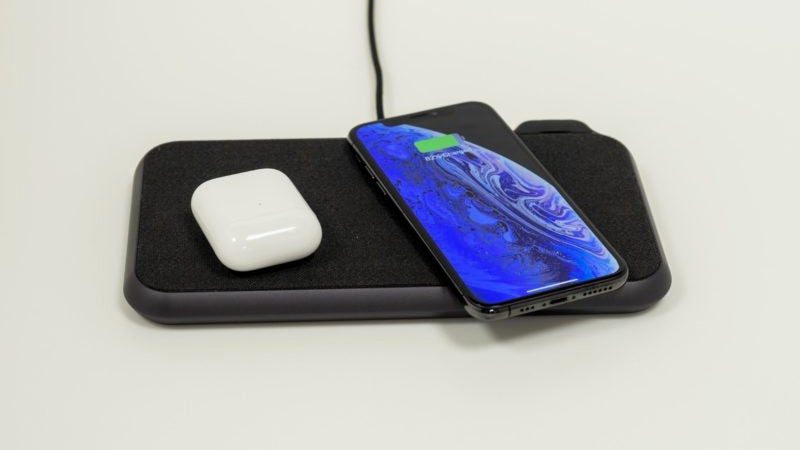 Two versions of the Liberty wireless charger will be available sometime in November, with both supporting an output of 30W (15W per device) wirelessly, plus an older 2.4A USB port for charging one other tethered gadget. What sets the two versions apart are their finishes. The €140 (£114; UK pricing TBA) version comes with a fabric top courtesy of a Danish textile company called Kvadrat, while the €180 (£147; UK pricing TBA) version features a transparent glass top revealing the layered pattern of charging coils beneath.

Of the many rumours circulating about why AirPower was cancelled, poor heat management and interference between coils sound like some of the more alarming problems Apple’s engineers were never able to resolve. Presumably, with support for just two devices at once, the Liberty will work more reliably. If wirelessly charging three devices at once is a must-have feature for your next upgrade, other solutions like the SliceCharge do exist. But you’ll be sacrificing the flexibility and reassurance of knowing that wherever your gadgets land they’ll still end up recharging.