During a recent thunderstorm, a woman in the US state of Florida was relaxing at home when a deafening boom roared through her house. Few could have guessed the source of the noise. According to WBBH, lightning struck near her septic tank, igniting methane gas and blowing her toilet to pieces.

“It was the loudest noise I’ve ever heard,” Mary Lou Ward told the news station. “We got out of bed and came over here and the toilet was laying on the floor.”

While exploding commodes might sound like something from a cartoon, Mary Lou’s toilet isn’t the first to blow up without warning. In fact, such incidents happen fairly frequently—and the consequences can be serious.

Any informed discussion of exploding toilets must start with Flushmate, a line of pressure-assisted flushing systems manufactured by Sloan. Placed in top tanks, these devices are meant to reduce water usage without sacrificing flushing power, and have been a popular choice for making toilets more efficient. A bunch of them have also blown up. 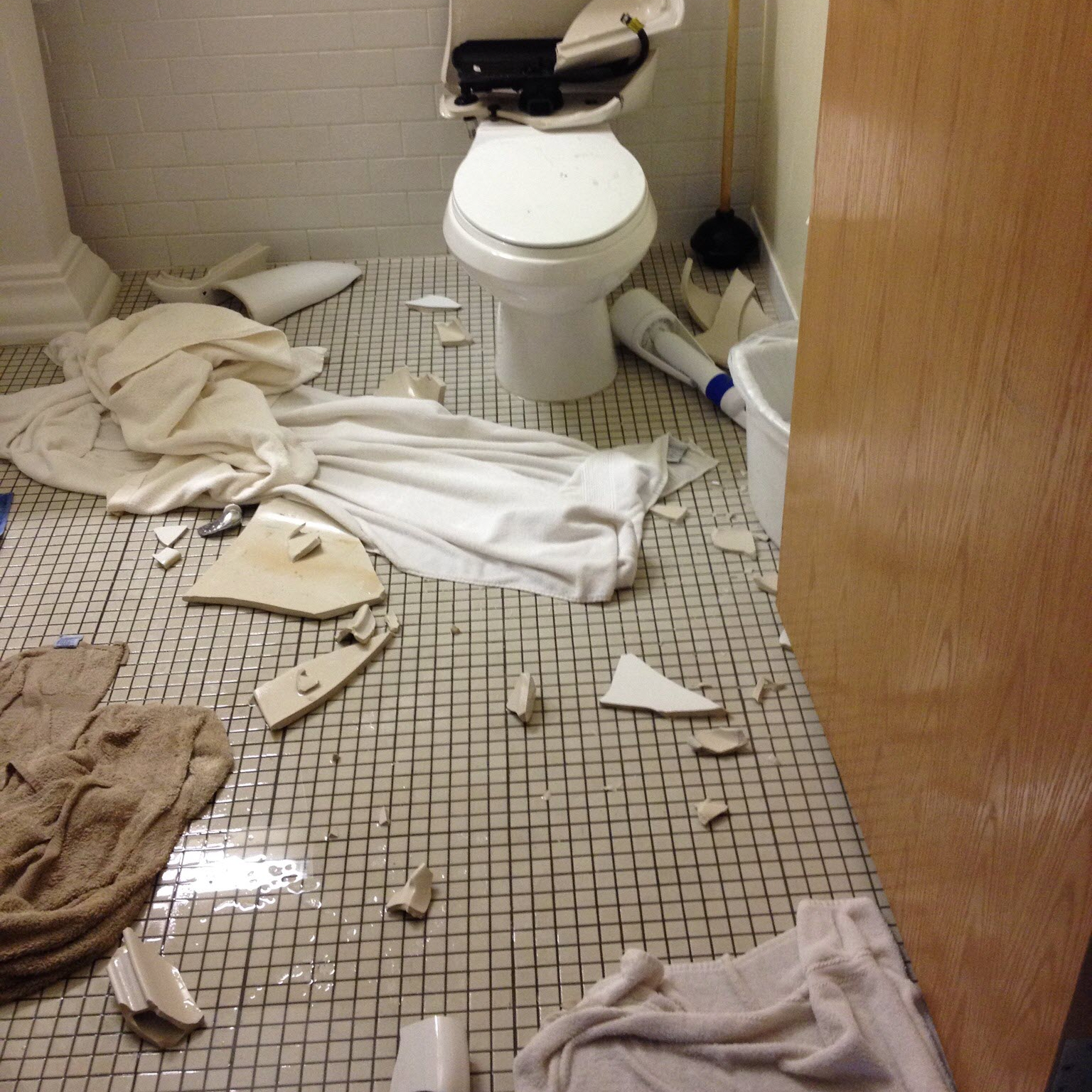 The aftermath of one Flushmate explosion. (Photo: CPSC)

In response to more than 1,700 reports of bursting Flushmate II and III units, Sloan has recalled millions of the devices in recent years. The pressure involved is strong enough to shatter toilet tanks, turning them into flying shards of porcelain. According to recall fact sheets, 38 Flushmate-related injuries have been reported, one of which required surgery.

“The consumer says that his fiance was sitting on the toilet when it exploded,” reads an account of one such explosion. “He walked in the room and said the lid came down and hit her in the back. She went to the [doctor] who said [there] was bruising on her lower back. The doctor suggested she take a couple days off.”

“The consumer says [there] is nothing left of his toilet,” the report concludes.

In 2011, for instance, two US federal workers were injured (one seriously) after toilets in the General Services Administration building blew up due to “high air pressure” in the water system. And in 2013, a Brooklyn man said he was hit with toilet shrapnel when he flushed during scheduled plumbing work on his building. His attorney claimed three other toilets in the building also exploded.

Even when these incidents don’t shatter ceramic, the results can be disturbing. In the state of California, city workers clearing a clogged sewer line in 2007 allegedly sent raw sewage spewing from a man’s toilet “over 3 feet into the air.” A similar case in Baltimore might be the most disgusting example of all. A woman there claimed that high-pressure sewer work sent a filthy geyser from her toilet while she was sitting on it, blowing her off the seat and leaving her soaked in human waste.

“I was literally covered in faeces,” she told WBFF in 2014. “Are you kidding me? Who wants that?”

A Japanese company offered free repairs on electric bidets that were bursting into flames in 2007, and an apparent sewer explosion blew up another toilet in the Netherlands in 1996, but there’s one more kind of exploding toilet that predates all these incidents—and remains firmly the stuff of legend.

Since at least the 1940s (and likely decades before that) people have told the story of a wife who puts a flammable substance into a toilet, only for her husband to sit down and accidentally ignite it by smoking. In the earliest extant versions of the tall tale, the commode is an outhouse and the man drops a match after lighting his pipe. In more recent tellings, aerosol spray and a cigarette are involved.

While sometimes recounted as a true event, no version of it has ever been verified—though, in a 1986 article in The Journal of Emergency Medicine, one Colonel Robert D. Slay claims to have tried to recreate it.

“In unpublished experiments undertaken in my own bathroom, I could not produce an explosion of any significant force,” writes Slay, presumably joking, “though I did succeed in superficially singeing a large watermelon.”