Google depends deeply on its contractors, but a series of damning reports indicate that while these workers make up around half of the company and are tasked with essential work, they are largely treated as second-class citizens. In response, a group of US senators wrote a letter to the tech giant in late July calling it out for this shitty labour practice. The letter follows hundreds of Google employees demanding fair treatment of contractors at the company.

The letter, sent to Google CEO Sundar Pichai on 25 July, was signed by 10 US senators, including presidential candidates Bernie Sanders, Kamala Harris, and Elizabeth Warren. The letter calls out the company for its unequal treatment of its independent contractors and temporary workers and includes a bulleted list of actionable demands.

“Temporary workers and independent contractors are by definition intended for short-term and non-core work, and we urge Google to end any abuse of these worker classifications and treat all Google workers equally,” the letter reads.

Among the policies the senators urge Google to adopt includes transitioning contractors into full-time employees after six months, more transparency at the start of a contracting period around when a worker can become a full-time employee, wage and benefit parity among all workers, and a limit on Google’s use of contractors for work beyond non-essential tasks relegated to full-time employees. The senators also call for an end to mandatory nondisclosure agreements and non-compete clauses in employment contracts.

“Making these changes to your company’s employment practices will ensure equal treatment of all Google workers and put an end to the two-tier employment structure you have perpetuated,” the letter states. 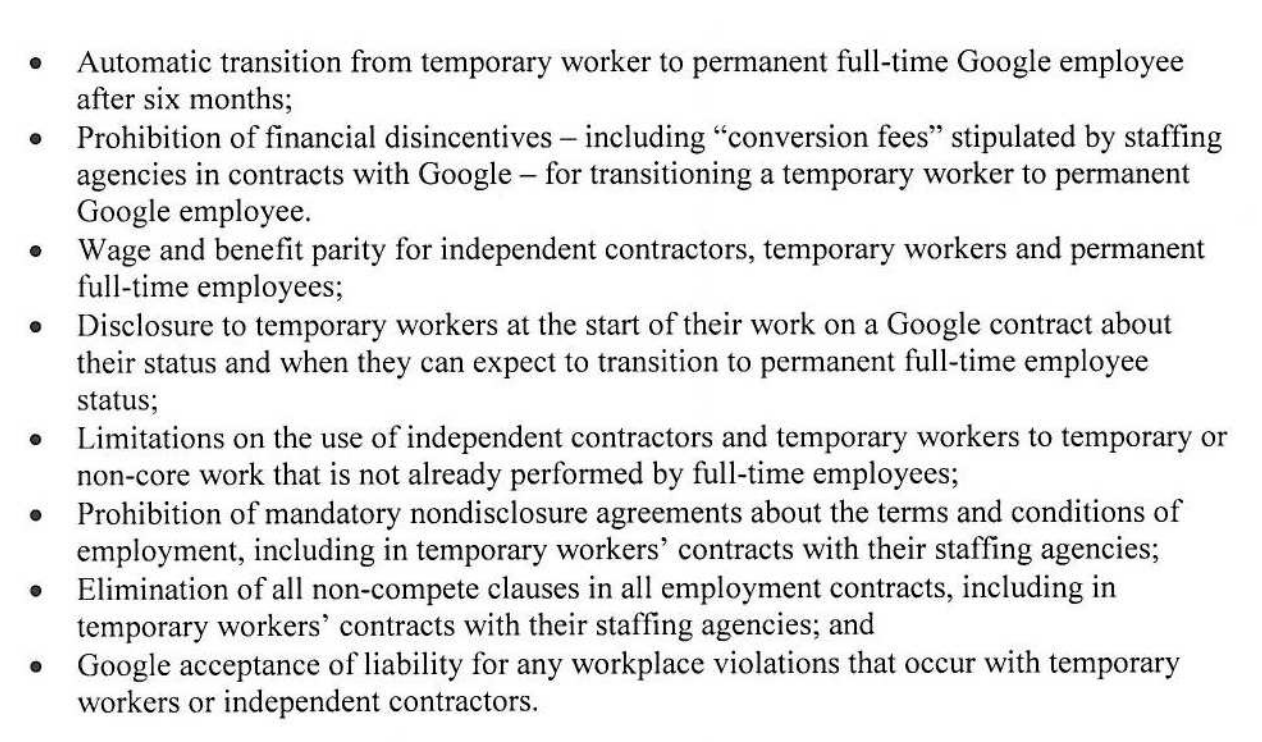 List of demands a group of US senators made of Google regarding its contract and temporary workforce. (Screenshot: US Senate)

Google’s ill-treatment of its contract workforce is well documented, came to a head earlier this year when over 900 employees signed a letter calling for the company to respect the contracts, the humanity, and the work of its temporary workforce—“temps, vendors, and contractors,” or TVCs, who are employed by outside staffing firms. As the Guardian described it:

That desire for respect defines the letter’s three demands. The TVCs asked Google to “respect our contracts” by paying out the remaining length of contracts for those whose terms were shortened; “respect our humanity” by allowing FTEs to “openly empathise” with fired TVCs; and “respect our work” by converting TVCs to full-time status.

After the employee backlash in April, Google did announce a few changes for its TVCs. The company said that it would require staffing companies to provide these workers with paid sick days, paid parental leave, health care, and tuition reimbursement, Vox reported, as well as raise the hourly wage to $15 (£12). These are certainly important changes that lean toward more fair and liveable working conditions; however, they leave unaddressed other issues, including those outlined in the senator’s letter from July.

The careful delineation of full-time employees from contractors has historically made crucial processes like reporting sexual misconduct and discrimination a more confusing and separate process for independent workers. Google contractors told Gizmodo last November that it was a confusing system for them, and that stated commitments to protecting people from sexual harassment and retaliation didn’t feel as genuine when it came to workers that weren’t full-time employees.

“There’s just some inconsistencies about what Google says and what Google does, especially around TVC issues,” a contractor told Gizmodo in November.

“Respectfully, we strongly disagree with any suggestion that Google misuses independent contractors or temporary workers,” Eileen Naughton, Google’s VP of People Operations, wrote in response to the senators, according to a copy of the letter. She added: “Being a temporary worker is not intended to be a path to employment at Google,” and said that this fact is clearly stated in Google’s written policies and in its training documents, and that they are able to apply for full-time positions through the same hiring process as everyone else.

“We care about everyone working at Google or on Google-related projects - employees, vendors, temporary staff and contractors alike - and we’re happy to meet with your staff to discuss these issues further,” Naughton wrote.

The senators requested that Google respond to the letter by this Friday, 9 August, to detail how they will address their policy changes. Google did not specifically comment on whether it would meet any of these demands.