We Tested Intel's Ice Lake i7 CPU, and It Packs a Pleasant Surprise

Intel’s Ice Lake processors aren’t on the market just yet, but after five years of teasing and delays, Intel put the upcoming 10nm CPUs in the hands of journalists last week. The company claims this generation of processors will help redefine “what’s possible in a thin and light laptop”—specifically, we’re supposed to see significant improvements in battery life, thermal performance, and speed. We couldn’t test out those first two claims, but we got the opportunity to test the latter one, and while the speed bumps we recorded for processor-intensive tasks weren’t by any means shocking, the GPU improvements seem pretty extraordinary.

A stone’s throw from Intel headquarters, inside a Marriott conference room in the US state of California, we tested the new i7-1065G7 U-Series processor with 4 cores and integrated Iris Plus graphics (more on those graphics in a second). This higher-end processor is the kind you might soon find in one of Intel’s new Project Athena devices—think that Dell XPS 13 2-in-1 shown off in May. Intel’s Ice Lake brand name covers the typical U-Series CPUs found in most of your mainstream laptops like the aforementioned XPS 13, HP’s Spectre and Envy lines, Lenovo’s ThinkPads and Yogas, and Apple’s latest MacBook Pros, and the Y-Series CPUs reserved for thinner devices and often more experimental ones, the former includes the MacBook Air and recently axed MacBook, and the latter includes products like the HP Spectre Folio. 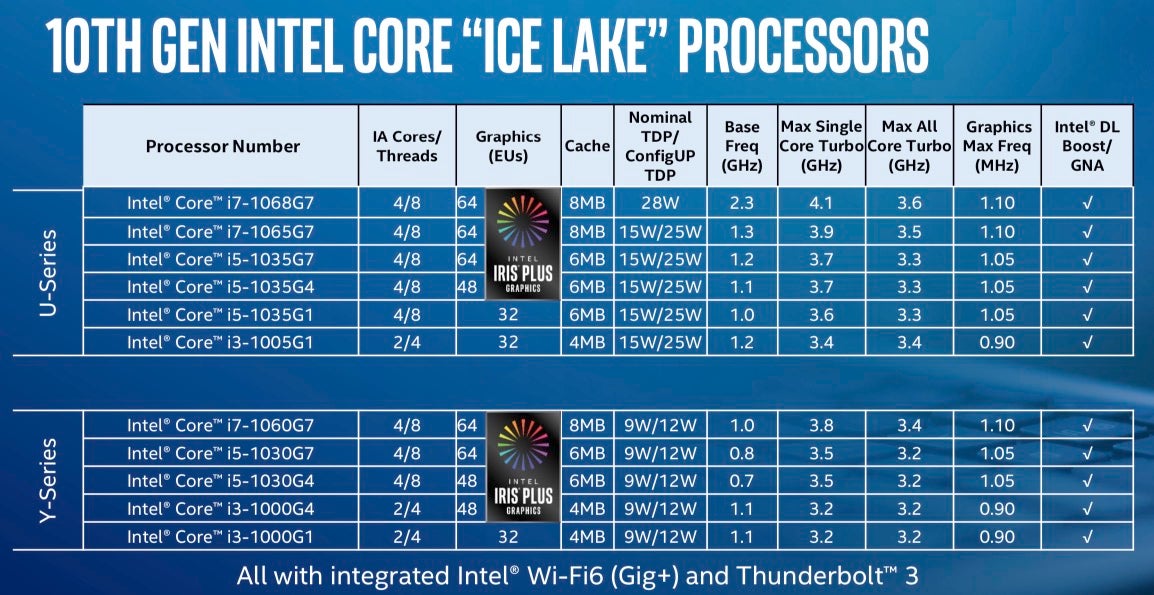 For our tests, Intel allowed us to use an internal software development machine running Windows 10 with the aforementioned 10th Gen i7-1065G7, 8GB of RAM, a 256GB SSD, and a 4K display. We chose to compare its performance to two similarly spec’d devices, the Huawei MateBook X Pro (2019) and the HP Envy 13. Both of these devices have Intel HD 620 integrated GPUs, but also come with the increasingly popular Nvidia MX250 GPU.

We put them through a series of standard benchmarks and in each one the Intel device handily beat its competitors despite both the Huawei and HP having twice the RAM. In a Blender (3D graphics software) benchmark that tests the speed of the CPU and the GPU when rendering a 3D image, Intel’s machine bested the other two. The same goes for a benchmark using Handbrake (a video converter app). In a Civilization VI graphics test, the Intel machine rendered frames faster than both machines on average. The Intel machine could even handle Overwatch, delivering an average of nearly 40 frames per second in a test we typically wouldn’t bother running on machines without a discrete GPU.

In Blender we process a 3D image and time how long, in seconds, it takes to complete the task. As noted this Blender test is designed to task the CPU. Shorter is better. (Graphic: Alex Cranz/Gizmodo)

In Blender we process a 3D image and time how long, in seconds, it takes to complete the task. As noted this Blender test is designed to task the GPU. Shorter is better. (Graphic: Alex Cranz/Gizmodo)

In Civilization VI we run the Graphic benchmark with the resolution set to 1080p and the graphics quality to High. The number represents the average time, in milliseconds, it takes to render each frame. Shorter is better. (Graphic: Alex Cranz/Gizmodo)

Geekbench 4 is a synthetic benchmark designed to test every component of the device. The Compute score focuses on graphics quality. Higher is better. (Graphic: Alex Cranz/Gizmodo)

Geekbench 4 is a synthetic benchmark designed to test every component of the device. The Multi-core score focuses on the quality of multiple cores in the CPU working in tandem. Higher is better. (Graphic: Alex Cranz/Gizmodo)

Geekbench 4 is a synthetic benchmark designed to test every component of the device. The Single Core score focuses on the quality of a single core of the CPU. Higher is better. (Graphic: Alex Cranz/Gizmodo)

The Handbrake benchmark involves us converting a 4K video to 1080p. The time is measured in seconds. Shorter is better. (Graphic: Alex Cranz/Gizmodo)

Overwatch is a popular game that is widely played but only moderately demanding. We test each system with the resolution set to 1080p and the graphics to High. The number is the average frames per second. Higher is better. (Graphic: Alex Cranz/Gizmodo)

WebXPRT 2015 is a browser based benchmark designed to set tasks commonly performed in the browser. Performance can be affected by the internet. Higher is better. (Graphic: Alex Cranz/Gizmodo)

In fact, the only place the Intel device didn’t surpass the devices with previous-generation hardware was in the WebXPRT 2015 test. That, however, is likely due to the speed of the internet tested on. Testing in a hotel environment with many connected devices is different than testing in the more consistent environment set up at Gizmodo.

When it came to CPU intensive tasks the Intel device was a little bit better—the standard speed bump we’ve come to expect from Intel’s yearly refresh. What was really exceptional were the results from GPU intensive benchmarks. Gaming, in particular, saw a marked improvement. The 10th generation CPU’s graphics performance was on average twice as fast as that found in the 8th generation, and only a little slower than Nvidia’s discrete MX250. That MX 250 can’t be found in 13-inch or smaller devices—not without exceptional compromises to the overall size. Which means gaming, in a less excruciating fashion, is finally going to be possible on 13-inch and smaller devices.

That’s huge! It’s also a refreshing change of pace. Intel has seemed to have barely any measurable improvement in GPU performance in the last several years. Which means people needed to invest in either a gaming laptop or a workstation. Now they may only need to invest in a device with at least a 10th generation Ice Lake CPU.

But performance could vary. If you’ll scroll back up to the list of Ice Lake CPUs shipping you’ll notice there’s now a G and then either a 1, 4, or 7 following the processor number. That G stands for graphics, and the 1, 4, and 7 represent the potential quality of those graphics. A 1 is associated with a CPU possessing 32 execution units, 4 is associated with 48 EUs, and 7 with 64EUs. Execution units are, in this case, referring to elements of the CPU devoted to graphic-intensive tasks. More is, naturally, better.

How well the cheaper and less powerful processors perform in graphics-intensive tasks remains to be seen. The Intel machine isn’t reflective of what we’ll see in stores. It was a device built to get a rough idea of improvements in performance. Intel’s biggest boasts are related to thermals and battery life, and we simply won’t have an understanding of how much those have improved—if they have improved—until devices start shipping in the next few months. For now it’s best to hold off on buying a new device. If you care about gaming, or just want a system that will perform better longer you’ll want to wait until the 10th generation of CPUs shipping. Cross your fingers that Ice Lake’s future doesn’t involve yet another delay.