Very little is known about the Denisovans – a mysterious group of hominins that lived alongside early humans and Neanderthals during the last Ice Age. New research has revealed a Denisovan finger bone that’s unexpectedly human-like in shape – an odd observation, given the close relation of Denisovans to Neanderthals, whose fingers differed quite a bit from ours.

To date, only five skeletal fossils are known from Denisovans: three molars, a mandible, and the tip of a pinky finger. That’s not much to go by, but the 50,000-year-old finger bone – discovered 11 years ago in Siberia’s Denisova Cave – yielded critically important genetic information. Still, these five fossils, even when combined with the genetic data, have done little to tell us what the Denisovans actually looked like.

A new study published last week in Science Advances is the first to provide a comprehensive physical analysis of the Denisovan pinky bone fragment. The research, led by E. Andrew Bennett from Paris Diderot University, revealed a finger that’s closer in shape to those of anatomically modern humans (Homo sapiens) than to those of Neanderthals – a surprise, given how closely related Denisovans are to Neanderthals. Fascinatingly, this finding doesn’t mean modern humans looked like Denisovans. Rather, it suggests Neanderthals, with their unusually broad fingers, had ventured down a unique evolutionary path, developing their own distinctive set of physical characteristics.

Sadly, this lone pinky finger bone is not without its own complications. After its discovery, the bone was split in half and sent to two different labs for analysis. Regrettably, photographs of the finger bone, which were taken by a Russian scientific team prior to the cutting, were lost. Hard to believe, but scientists don’t have photographic evidence of the bone prior to it being split in two.

That’s awful enough, but the story gets even worse.

“We do not know where it is currently,” Bence Viola, a co-author of the new study and an assistant professor at the Department of Anthropology at the University of Toronto, told Gizmodo.

Yes, you read that correctly: One of the most important fossils discovered in recent memory is missing. Thankfully, genetic information taken from both pieces still exists, as do photographs of the missing tip, allowing for a virtual reconstruction. 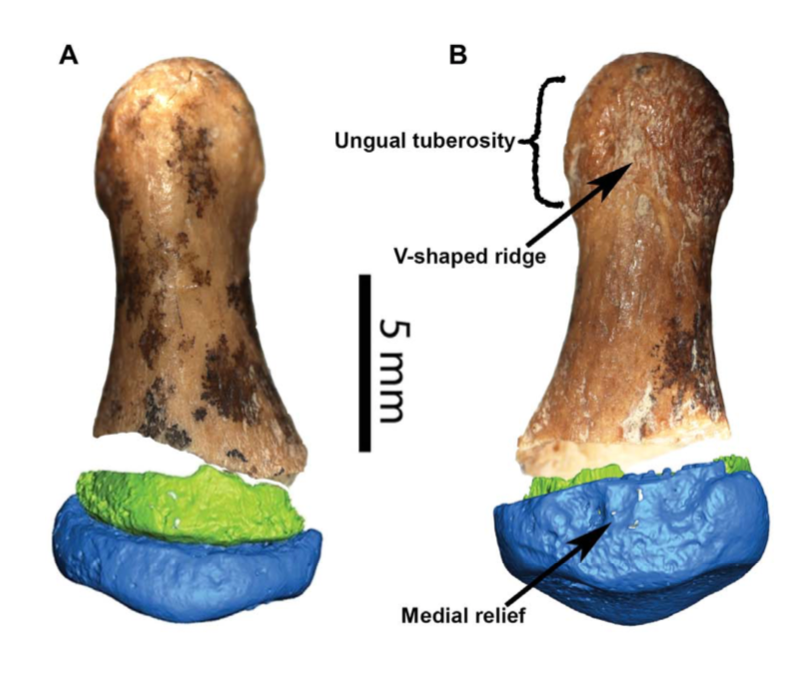 “We used ancient DNA analysis to look at [the] mitochondrial genome [of the distal portion],” explained Viola in an email to Gizmodo. This was done to confirm a genetic match between the two pieces and to perform more genetic tests. “We reconstructed the finger from photographs of the distal (tip) part and micro computed tomography scans of the proximal (joint) part. We then used the measurements taken on the original parts and the reconstruction to compare it to other finger bones,” such as those from Neanderthals and humans, both Pleistocene-era and modern, across various stages of physical development.

The analysis, also conducted by Isabelle Crevecoeur of the University of Bordeaux and E. Andrew Bennett of Paris Diderot University, found that the pinky finger belonged to an adolescent Denisovan female who was around 13.5 years old when she died. And as the new study shows, her finger was strikingly similar to those of modern humans.

“I was quite surprised,” Viola said. “I always expected the other end of the finger to look rather Neanderthal-like. Neanderthals had relatively ‘chubby’ fingers compared to [ours], with the bone under the fingernails – the so-called apical tuft – relatively broad and round, while in [modern humans] this part is more elongated, narrow and oval.” 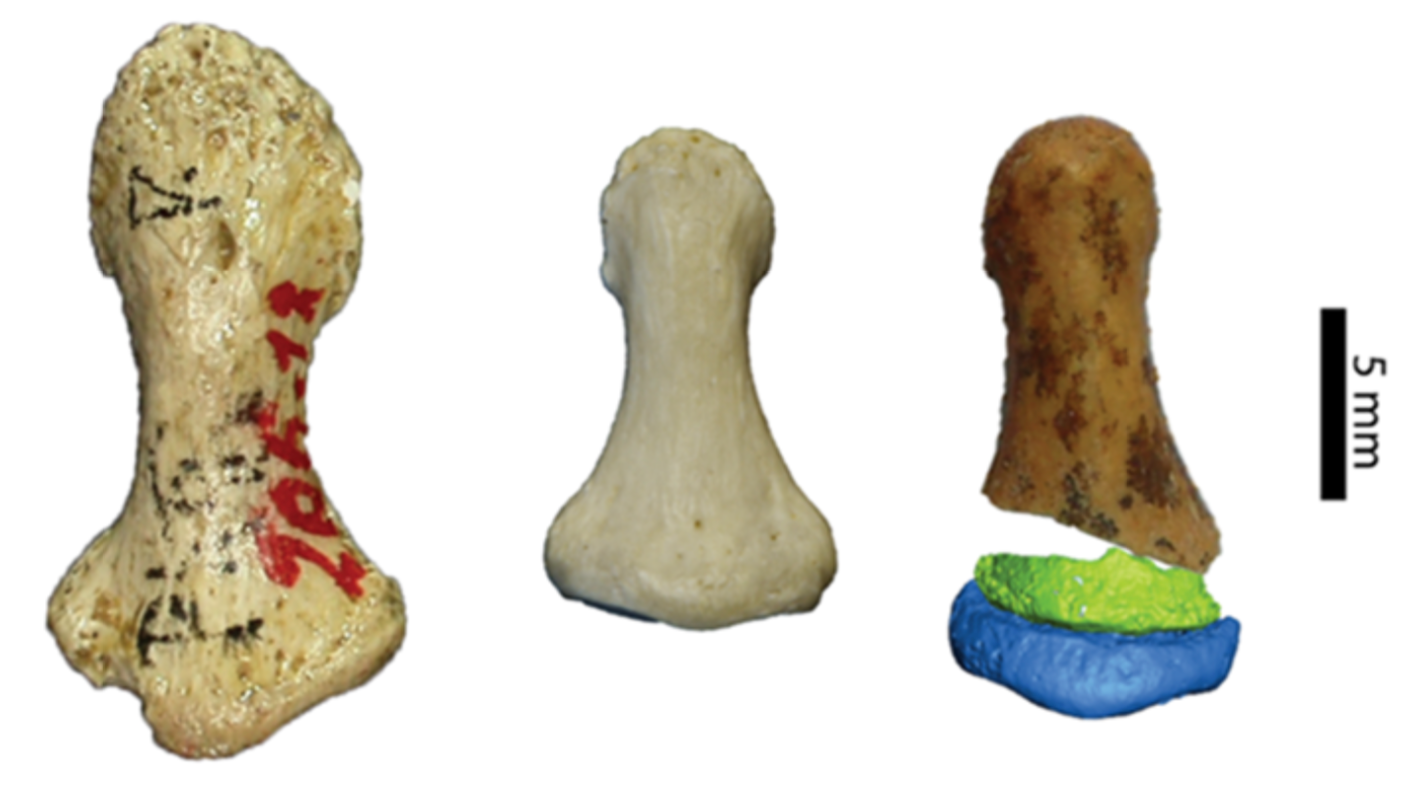 Bennett was also surprised by this observation.

“Given that the molars of Denisovans are characterised by more archaic features, it was not expected to find a Denisovan bone that looks like a modern human one,” Bennett told Gizmodo. “Combined with what we know about the teeth, this shows that skeletons of Denisovans had both archaic and more ‘modern’ features. However, it is important to note here, that given the relationships of these three populations, it appears that the Neanderthal fingertips are actually the derived morphologies.”

By derived, Bennett is saying that modern humans and Denisovans obtained and retained their fingers from a shared common ancestor. Neanderthals, on the other hand, obtained their fingers from the same common ancestor, but did not retain this shape over time; they went on to evolve their own distinctive fingers, a consequence of unique environmental and lifestyle pressures. Interestingly, the new research means we have a better sense as to when the distinctive Neanderthal fingers appeared – namely, after the split between Neanderthals and the Denisovans.

“In many aspects Neanderthals are weird.”

Importantly, this finding doesn’t mean Denisovans are more related to us than Neanderthals.

“It rather highlights the fact that not everything we observe in extant [living] humans is ‘modern’ or ‘evolved,’” Jean-Jacques Hublin, director of the Department of Human Evolution at the Max Planck Institute for Evolutionary Anthropology, told Gizmodo. “Independently, Neanderthals evolved their own very peculiar pattern of a widened and puffy end-phalanx. In many aspects Neanderthals are weird,” said Hublin, who wasn’t involved with the new research.

Sadly, the new work still doesn’t really tell us what Denisovans looked like. Viola said it would be “dangerous speculation” to reconstruct the entire Denisovan body from a few teeth, a lone jaw bone, and a pinky finger. That said, “we can see from the [Denisovan] teeth, these are much larger and robust than what we see in modern humans, but also Neanderthals,” he said.

Another major implication of this study is what it means to archaeologists who are trying to discern the fossilised remains of Neanderthals, Denisovans, and early modern humans. Just because a fossil appears to be from a modern human, for example, doesn’t mean that’s actually the case.

“It’s clear now that [archaeologists] can’t just watch out for archaic-looking bones, but also for bones looking more modern,” the researchers wrote in an email to Gizmodo. “Eventually, some bones may be discovered with Denisovan-specific features, but it’s likely that for many bones, like the phalanx, we will need to use genetics methods to identify them.”

Katerina Douka, an anthropologist from the Max Planck Institute for the Science of Human History, described the new paper as “an important study” that securely identifies the two bone fragments as belonging to the same individual. Douka, who wasn’t affiliated with the new research, thought it notable that the authors were able to specify the age at which the female individual died, “assuming the same developmental stages for both modern humans and Denisovans,” she said. But the biggest surprise is the fact that the finger bone “appears gracile [thin and slender] and falls closer to the range of variation of modern human distal phalanxes as opposed to those of Neanderthals.”

Douka said the study presents some interesting possibilities in regards to the anatomical variations of the Denisovan body. Whether this is “related to the fact that the individual is a female teenager, hence more gracile, or whether there are functional reasons for this difference is something we cannot answer with such a small sample size,” she said.

Indeed, archaeologists are working with painfully little archaeological data. But each study brings us closer to the truth – even if it’s just a bit of pinky finger at a time.