ASOS Is Selling Useless Earbuds, But, Hey, They Kind of Look like AirPods

Love them or hate them, AirPods have quickly become an iconic flex among the millennial and Gen Z crowds. Apple’s wireless earbuds are a not-so-subtle way to broadcast you’ve got money to burn on their high sticker price and any subsequent replacements after you inevitably lose one of the ridiculously tiny buggers.

But if you want the benefits of this new-age status symbol with none of their functionality, you’re in luck. Fast-fashion brand ASOS is selling faux wireless headphones for a fraction of the price: £6.00. Per earbud, mind you, so altogether about £12 if you happen to have two ears. That’s still much cheaper than a pair of the newest model AirPods, which currently go for £160. Pick up a wireless charging case too, and you’re easily out £200. 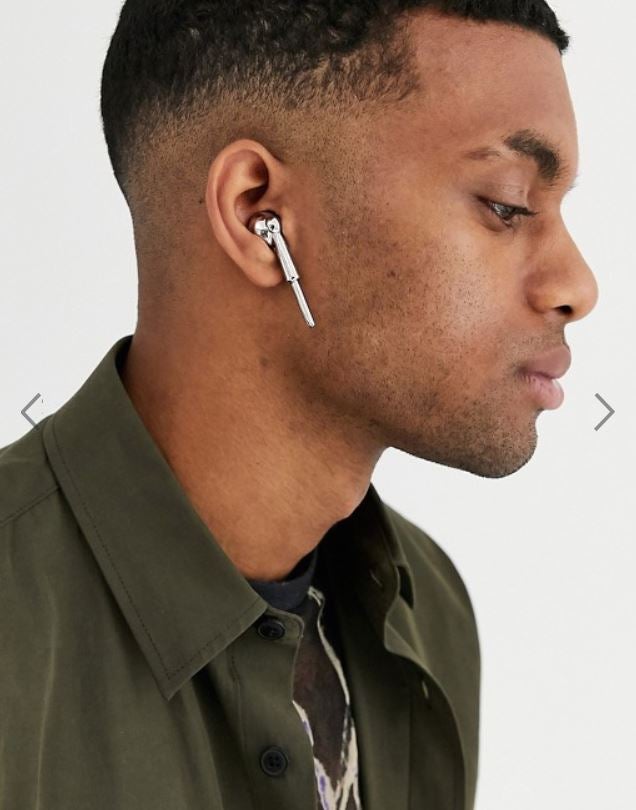 Do these ones play music? No. Do they do anything? Nada. But, and this is the “but” ASOS hopes will get you to shell out £6 for a hunk of plastic: Do they make people think you’re cool? That’s debatable.

The whole thing rings like some kind of cultural Pavlov’s dog experiment to me. Only instead of learning to drool when a bell rings, we’re being conditioned to see anything that vaguely looks like an AirPod as a signal that someone’s loaded. Even if their original purpose, actually playing your music, gets lost somewhere in translation.

And if you think these nonfunctioning earbuds are some kind of elaborate joke, you clearly aren’t familiar with the ASOS brand. In the last year, this online retailer has gone viral for some bizarre fashion offerings. The Huffington Post recently pointed out a few gems like this dress resembling a bag of onions and a chainmail facemask that you will never convince me isn’t kink-related. Though it’s among good company considering ASOS just released this full-leg harness this season.

When it comes to these kinds of headphones, Apple’s AirPods have been consistently dominating the market since they launched in 2016. So not surprisingly, the world’s best-selling wireless earbuds have clearly made an impact on our collective cultural consciousness. Maybe for some people, that’s enough to explain why anyone would pay £12 to wear useless pieces of plastic shoved in their ears. As for me, I’m still just as confounded by these youths.