Some of the most serendipitous discoveries about nature can be prompted by just about anything, like finding the first known venomous frog by accidentally grabbing the business end of one, or revealing a new owl species by eavesdropping on its unplaceable hooting. Or, perhaps, you might stumble upon a really weird turd.

Two summers ago, Brandon Barton, a community ecologist at Mississippi State University in the US, and his colleagues were backpacking through the craggy Hells Canyon Wilderness along the border between the states of Oregon and Idaho. There, they were studying elk ecology while en route to a scientific conference in Portland, Oregon. But while hiking down a trail, something strange caught Barton’s eye. It was a lump of wolf poo – and it didn’t look quite right.

“I remember immediately thinking, ‘Is that a grasshopper?’” recounted Barton.

Once the researchers picked it up, they could see the scat was absolutely loaded with buggy bits. Legs, heads, wings – the whole hopper. The path itself was covered with living grasshoppers, with the group having to fend off the bugs as they walked.

Fascinated, Barton and his colleagues set up motion-sensor cameras nearby to see if the mystery pooper would return. Barton also bagged up the distinctive dump for further analysis.

Barton checked the cameras the next day, and sure enough, they recorded a wolf slinking through the area in the middle of the night. The team then left the cameras behind and continued to the conference with the poo in tow – which turned out to be a feat of olfactory endurance.

Eventually, Barton quarantined the miasma in a third bag and stored it in a hotel fridge during the conference. The poop then accompanied the researchers on a flight back to Mississippi, where a colleague painstakingly dissected the stinky treasure.

All told, the wolf had horked down at least 181 grasshoppers, probably in a single meal. This discovery – the details of which are published this week in the journal Ecology – was held up when the team collected the camera footage weeks later and saw that what appeared to be a single wolf coming back, night after night, seemingly feeding on the swarms of grasshoppers that the researchers noticed along the trail. 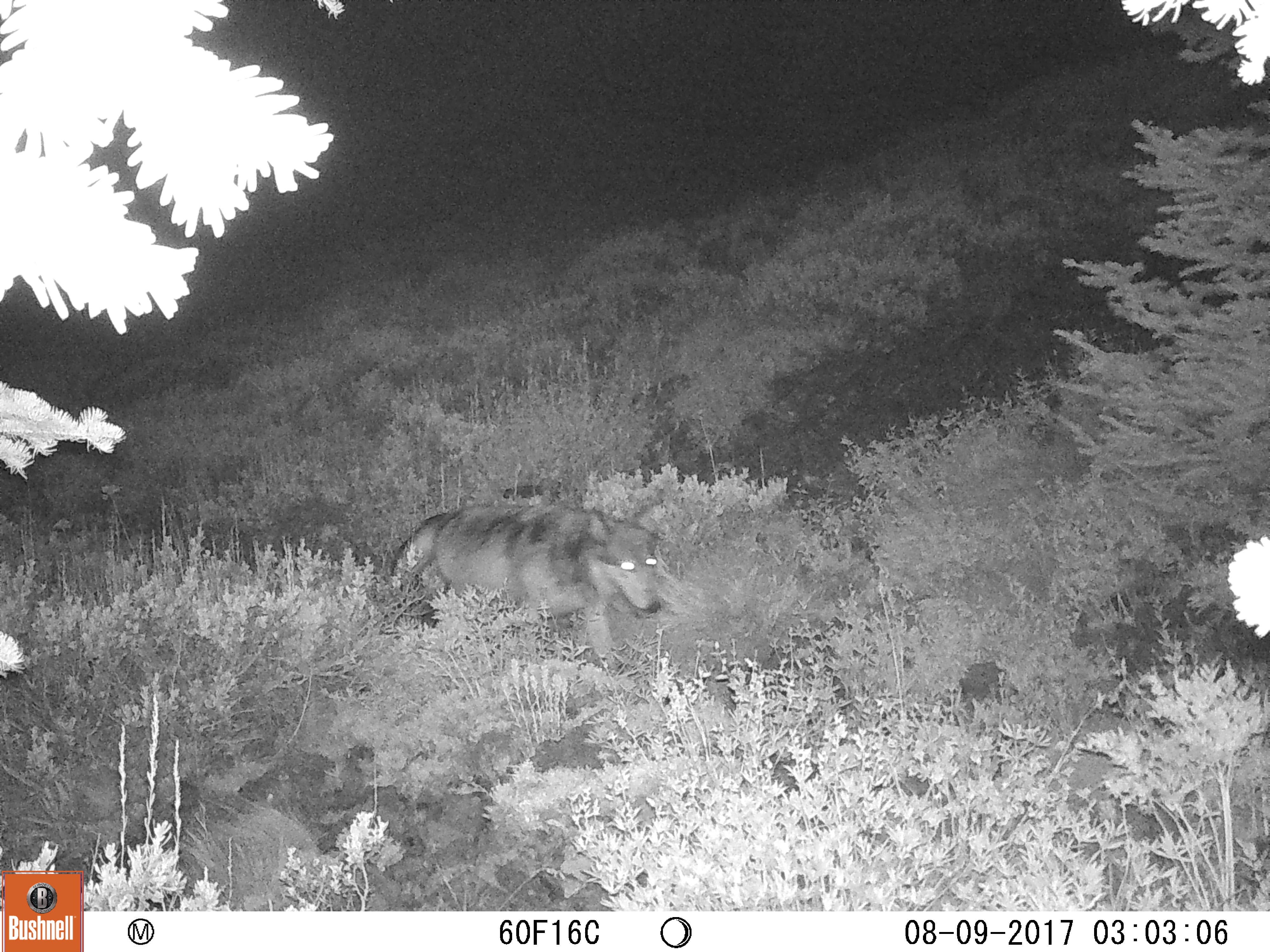 The grasshopper-loving wolf, returning to the scene of the crime. (Photo: Brandon Barton)

Since grasshoppers get sluggish in cool, nighttime conditions, Barton thinks the wolf was exploiting a low-effort midnight snack.

“That wolf just came along like ‘chomp, chomp, chomp’, because [the grasshoppers] don’t fly away, they don’t hop away,” said Barton.

The grasshoppers would be a useful food source for a lone wolf, Barton said, since larger animals would be difficult to kill without a pack.

“Why waste your time running down an elk calf or a cow elk that a lone wolf probably can’t take down anyways, when you can just eat all these grasshoppers?” Barton said.

The researchers estimate that the wolf’s springy treat could have provided as much as 10 per cent of its caloric needs.

Whatever the importance of grasshoppers to the diets of wolves, for Barton, a key lesson from the discovery is that two classic, well-studied food webs – the “aspen tree-elk-wolf” and the “plant-grasshopper-spider” chains – can actually intertwine.

“We’re holding in our hand evidence that those two things are not independent,” said Barton. “Wolves are actually feeding on the other food chain.” 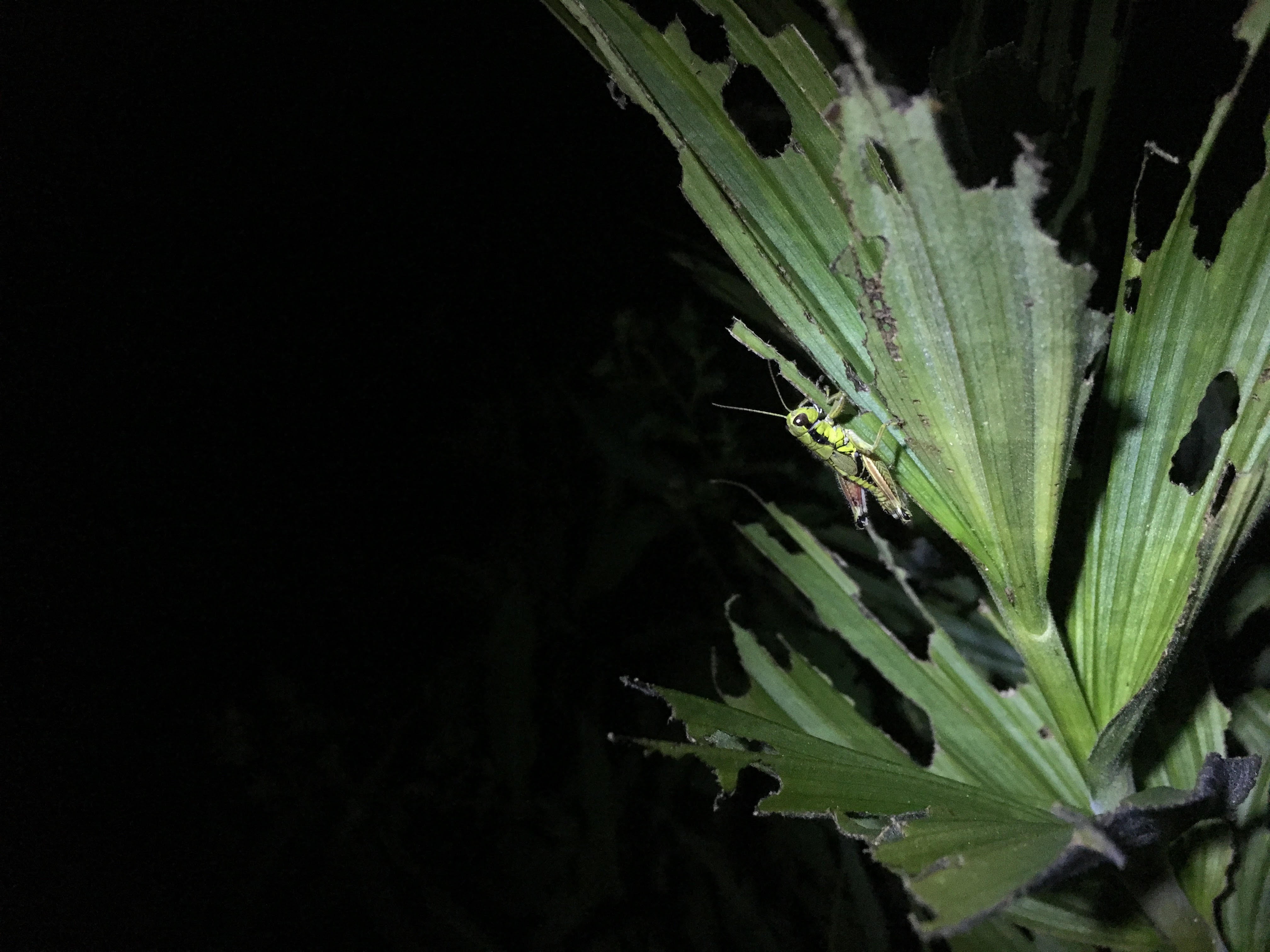 Carolyn Shores, a wildlife biologist at the Ministry of Forests, Lands, and Natural Resource Operation in British Columbia, Canada, who was not involved with this study, said the finding is a welcome addition to the growing body of knowledge on wolf diets, but she wonders if the scat is conclusively a wolf’s, since the poo of big coyotes can be mistaken for wolf faeces.

“My one suggestion to them would be to ID it positively through DNA,” Shores told Gizmodo.

Tom Gable, a wildlife biologist at the University of Minnesota also not involved with this study, said the finding is interesting, especially because documenting these habits often depends so much on chance observations. But he isn’t as convinced that the wolf-grasshopper relationship has much ecological influence.

“I think it’s a really cool natural history observation, but in my opinion it sort of ends there,” Gable told Gizmodo. “It reaffirms that wolves are adaptable, flexible predators.”

This gastronomic flexibility is something Gable and his colleagues are increasingly revealing. Wolves have long been typecast as deer and moose enthusiasts, but Gable and his team have recently shown that wolves regularly partake in what sounds like a very specialised sampler platter. Fish. Swans. Otters. Beavers. Even blueberries.

The Seven Devils Mountains, near where the wolf scat was found. (Photo: Wikimedia Commons)

Grasshopper-gulping fits right into an emerging picture of wolves as ingenious and scrappy survivalists, not just meat-seeking missiles.

Barton said these new insights about the lives of animals we supposedly know so well show why the conservation of all players in an ecosystem is important. “When you go around messing with food webs and we just cast one piece to the side, we don’t know what interactions we’ve lost when we lose that species.”