Dell XPS 15 Review: A Really Good Laptop for Almost Everything

There’s nothing like a trial by fire. So on my latest trip, I left my regular work laptop at home and grabbed the recently refreshed Dell XPS 15. With my destination more than 7,000 miles away from home and no backup machine to rely on, the XPS 15 was my command station for working on everything from writing stories to editing photos and videos, creating gifs, and even playing some games during my downtime. And over the course of a week, the XPS 15 was nearly flawless, performing even better than I expected while easily accommodating everything I threw at it.

From the outside, not a tonne has changed on the XPS 15 7590, though that’s not a bad thing. After more than three years of the same general design, the combination of brushed aluminium on top and bottom with soft-touch finish covering its carbon fibre deck still gives Dell’s flagship 15-inch thin-and-light a sleek and modern appearance. Along with Apple’s MacBook, it’s one of the rare laptops that sports a timeless look and resists ageing better than most other systems.

What is it?: A thin-and-light 15-inch laptop

At the back, the XPS 15 measures 0.66-inches thick, before it tapers down to 0.45-inches in front, with a selection of ports on either side including a two USB 3.1 ports, one USB-C port with Thunderbolt 3, a full-size HDMI port, and a headphone jack. The XPS 15 even features a full-size SD card reader, which is a huge bonus for someone like me who often has to transfer images from a camera to a laptop for editing, and also means there’s potentially one less dongle you’ll have to carry around. That said, for a 15-inch system, it would have been nice if Dell included one more USB port (of either type), as three USB ports is the same number ports you get on the XPS 15's smaller sibling, the XPS 13.

The one major change to the XPS 15's design is that Dell has finally followed the XPS 13's lead by moving its 720p webcam from below the display to its proper place on the XPS 15's top bezel – in other words, the nose cam is gone. On top of that, on the XPS 15 7590, you can now select between three different displays including a non-touch 1080P screen, a 4K UHD touchscreen, and the 4K non-touch OLED screen that came on our review unit.

While the OLED display costs £250 more than the default 1080p screen, for content creators looking for accurate colour reproduction, that premium is totally worth it. Not only does the OLED panel cover 100 per cent of the DCI P3 colour space, with a max brightness of 442 nits, our XPS 15 review unit actually exceeded Dell’s listed claims of 400 nits of brightness. And despite being a glossy panel, Dell has equipped all of the XPS 15's displays with an anti-reflective coating that does just enough to prevent glare or reflections from being distracting while still making sure colours appear rich and vibrant. 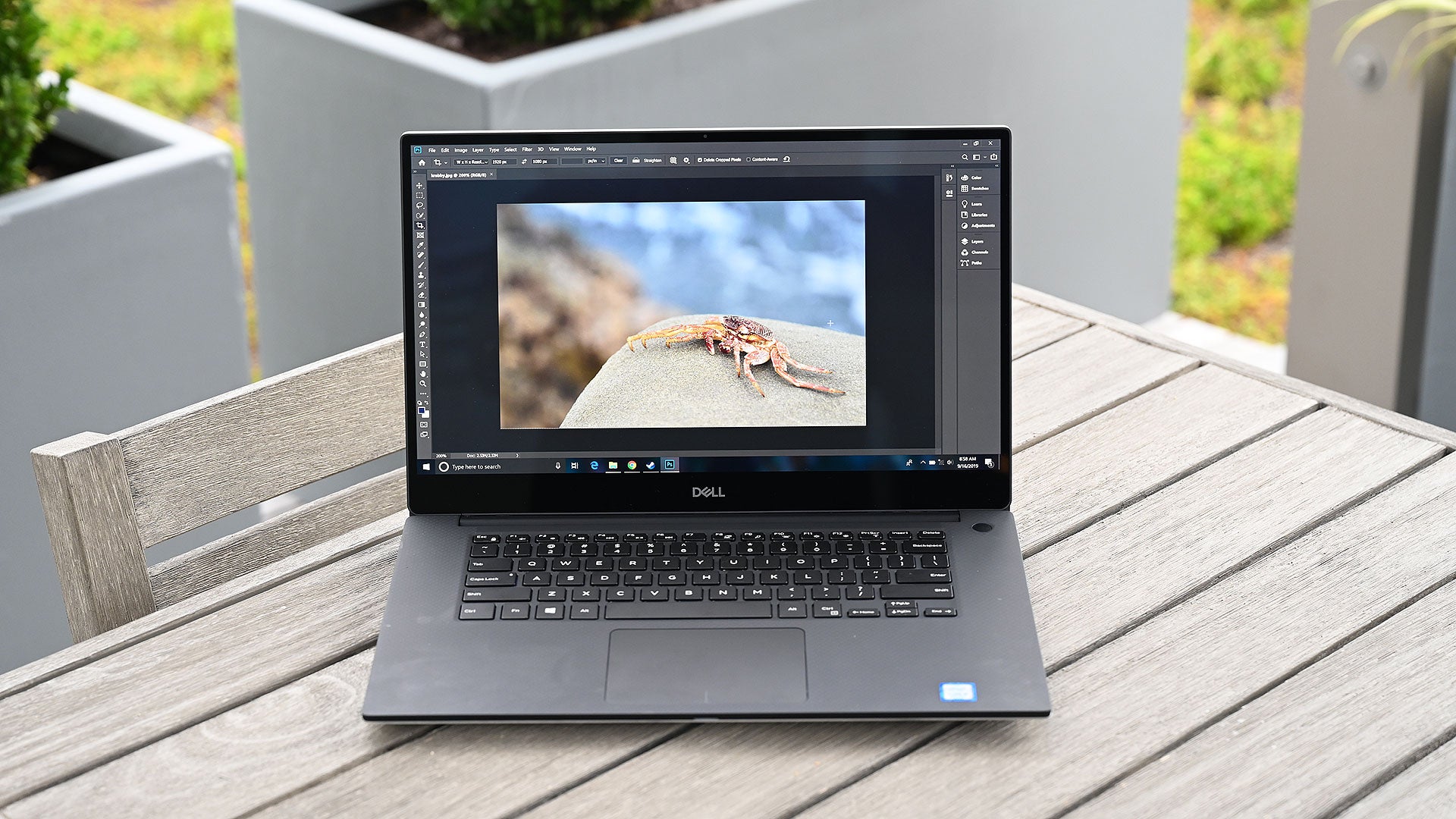 One of the few hiccups I ran into during my XPS 15 testing was a weird bug that caused the OLED screen to flicker faintly, typically when viewing images, docs, or websites with white backgrounds. Thankfully, this bug seems to be a weird side effect caused by a setting in Intel’s graphics drivers, and once I disabled the Panel Self-Refresh option, the issue went away completely.

This range of options means can you pretty much configure the XPS 15 for almost any use case, tweaking things like memory and GPU as you see fit. The optional GTX 1650 is an especially nice touch, as it cuts down on time spent rendering videos, and it also means you can easily play modern AAA games at 1920 x 1080. 4K is an option, too, particularly if you’re playing an older title or if you don’t mind tweaking the graphics settings down a bit. In prolonged use cases, the XPS 15's relatively slim chassis does put a slight limit on the system’s max performance due to thermal throttling, but you have to remember, this is a 4.5-pound mobile workstation that still fits in most laptop bags and not some 10-pound monstrosity like the Acer Predator Triton 900 I tested a while back.

Just one more USB port on this side would be a nice upgrade. (Photo: Sam Rutherford/Gizmodo)

And even with the XPS 15's more restricted chassis, it performed quite well on benchmarks such as Handbrake, where the XPS 15 took 8 minutes and 1 second to render a 6GB 4K video, which is only slightly longer what we got from the Triton 900 (7:40), despite the Triton having a much beefier GPU. Meanwhile, when using Blender to test CPU performance, things were also quite close with our Core i9-9980 XPS 15 finishing a demo render in just 4 minutes and 15 seconds, compared to 4:05 for the Triton 900, which also sported an Intel i9 CPU. So yes, there is a small penalty in pure performance due to the XPS 15's thermals, but considering its more portable dimensions, the difference is pretty negligible unless you are maxing out the system on a regular basis.

As for games, the XPS 15 pumped out some respectable framerates in Rise of the Tomb Raider, hitting 54.2 FPS on 1920 x 1080 and high settings. It was a similar situation in Far Cry, where the XPS 15 hit 49 fps at full HD and slightly more intense ultra settings. 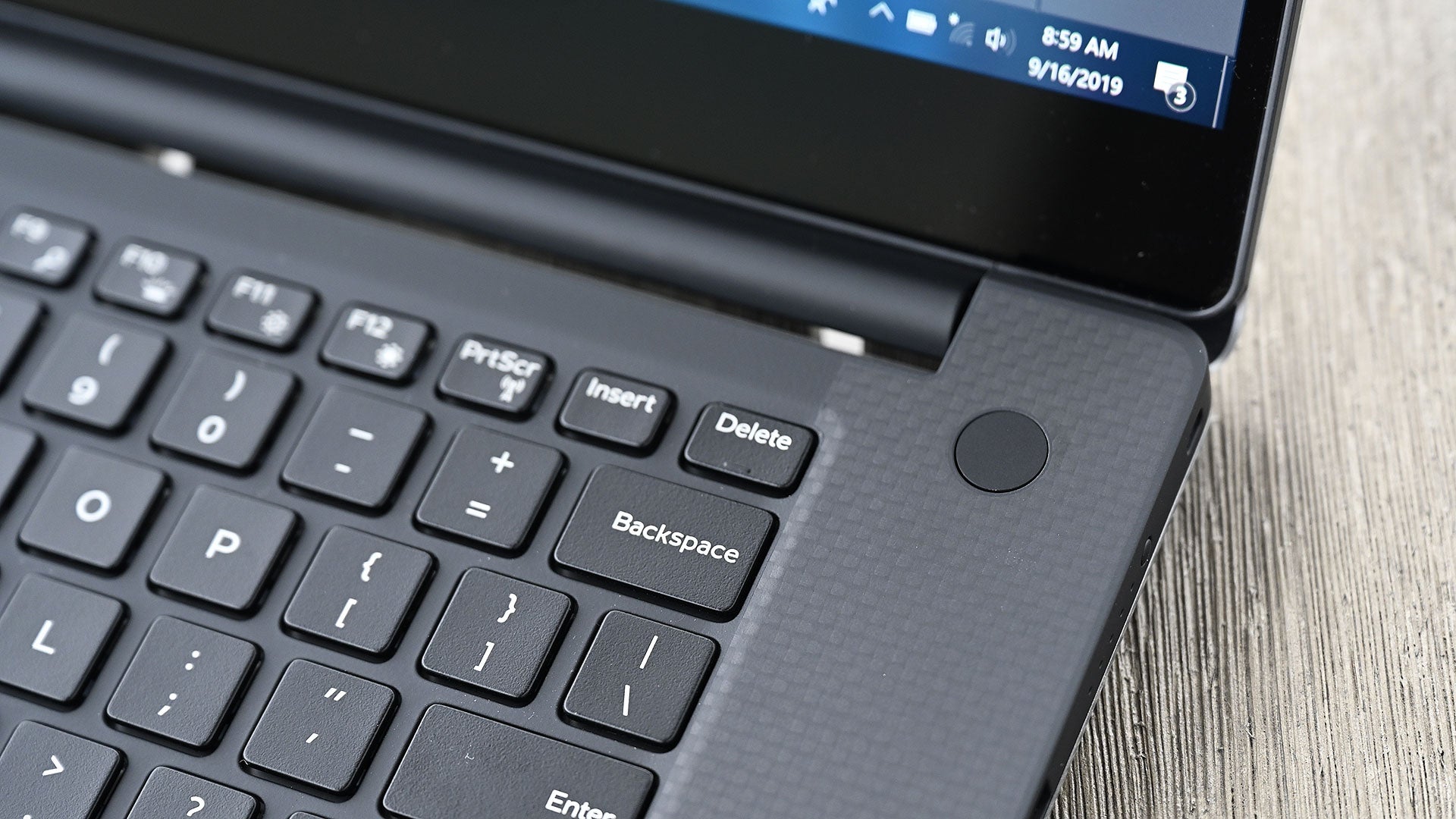 Critically, Dell hasn’t messed with the XPS 15's keyboard, which remains a delight to use thanks to relatively deep key travel (for a laptop) and a nice, springy feel. That said, I hope that for its next refresh, Dell gives the XPS 15 a slightly wider touchpad.

Due to its bottom-mounted speakers, sound gets directed into whatever it’s resting on before it hits your ears, which can impact overall audio quality. And with all that room on either side of its keyboard, it seems like there’s ample room for Dell to change up the XPS 15's speaker placement in future generations. 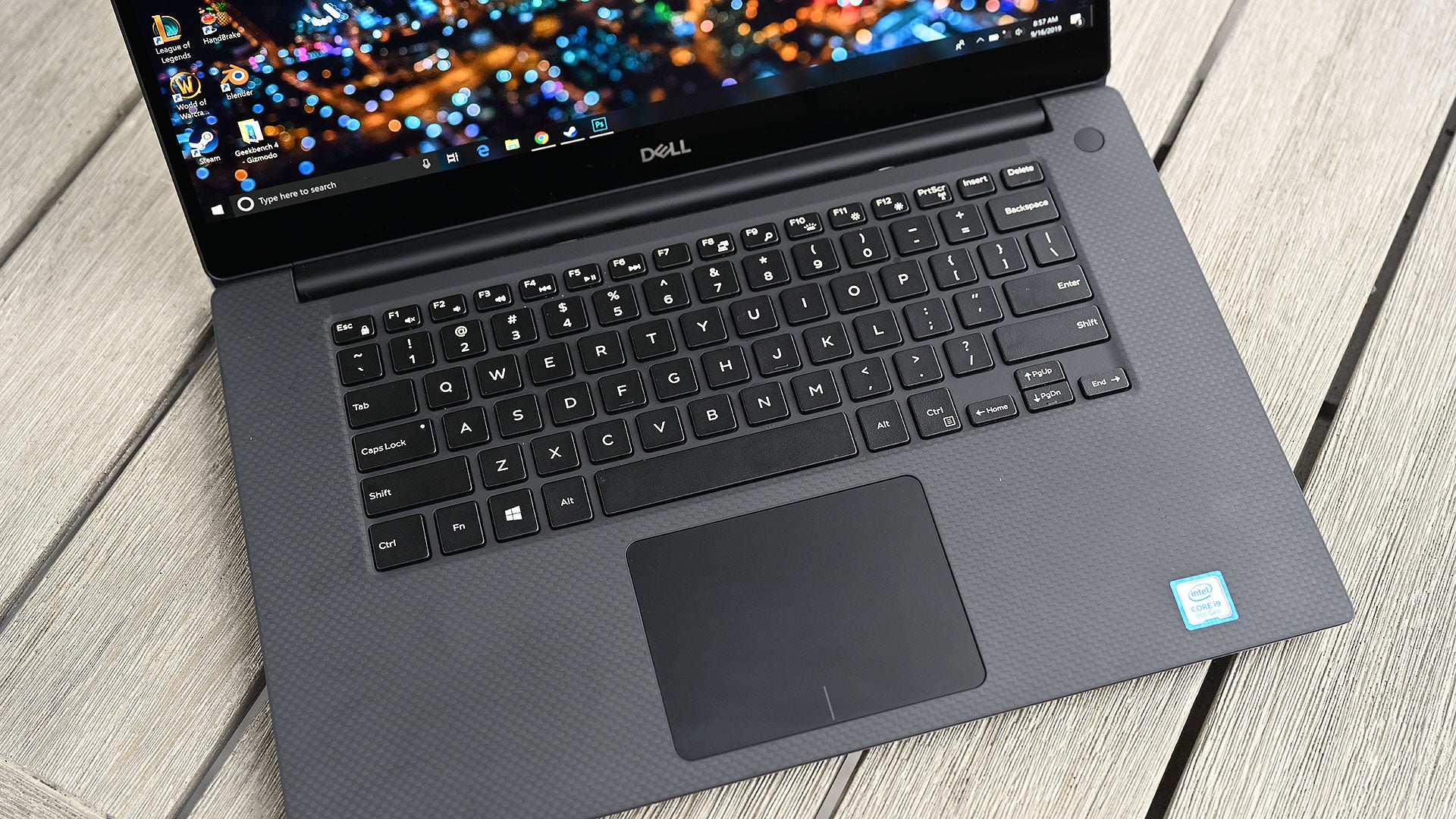 For the 7590, Dell also incorporated a fingerprint reader into the XPS 15's power button, which makes logging in and out of the system nearly instantaneous, and feels like a good alternative to not having support for Windows Hello facial recognition. (The XPS 15 doesn’t have it, and that’s a bummer.)

Finally, with a battery life that lasted 7 hours and 22 minutes on our video rundown test, the XPS 15 demonstrated solid longevity for a laptop its size. That said, if you are doing anything more graphically intense, battery life can evaporate much faster, as even when playing a relatively less demanding game like League of Legends at 4K, the XPS 15's runtime was closer to two and a half to three hours.

Still, after a week of meeting my every demand, there’s no doubt the XPS 15 7590 is a first-class laptop. With a wide range of configurations, the XPS 15 can accommodate all sorts of people from a university student to a pro video editor, while its slim design makes it easier to lug around that many of its more bulky competitors. Sadly, the one thing it can’t really do is fit on a standard aeroplane tray table, so if you’re the kind of person who likes getting work done in the air, you kind of have to shell out for a first-class ticket too. 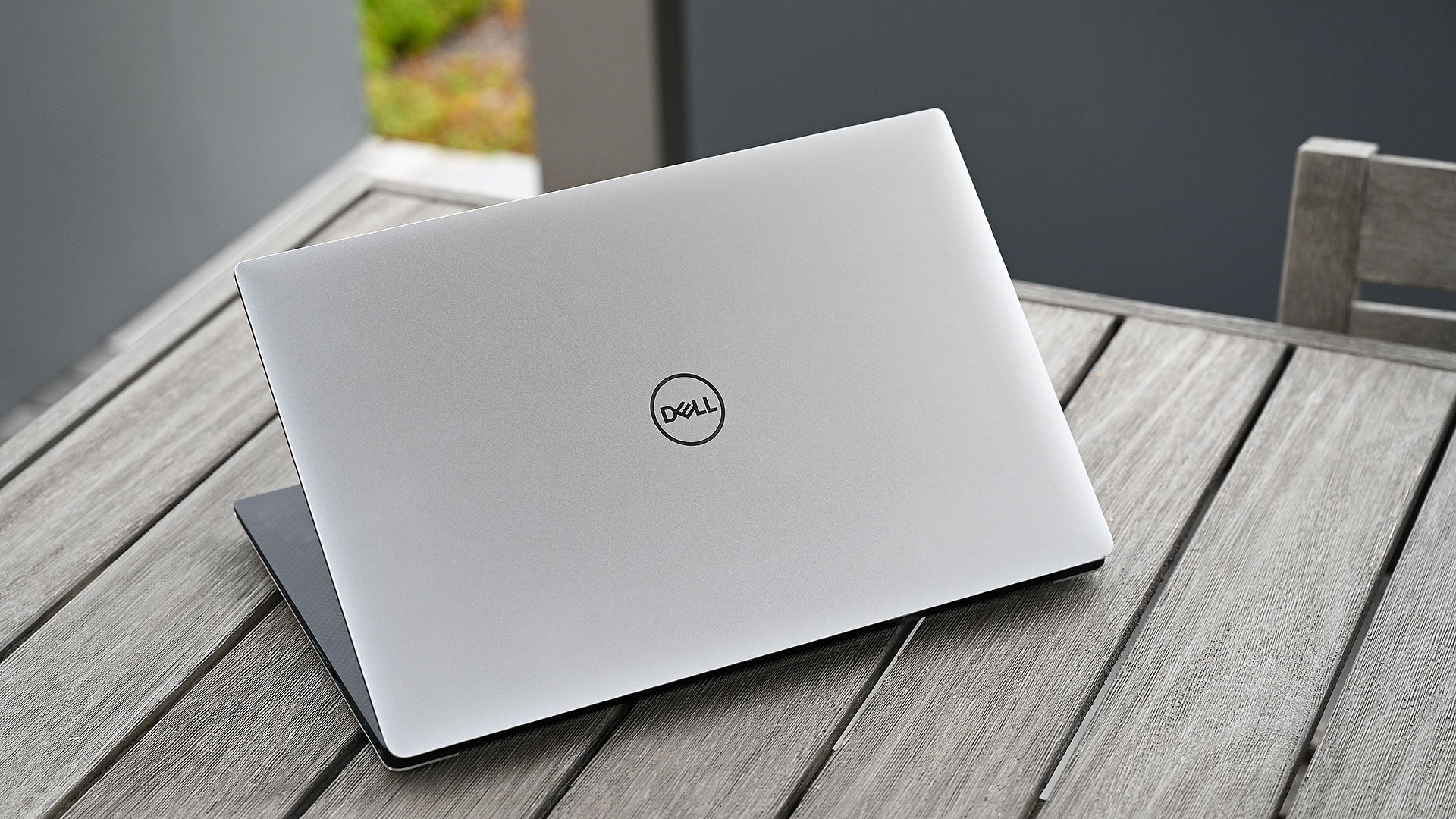