Smartphones have become an affordable tool for filmmakers on tight budgets, and accessory makers are following suit by giving aspiring directors access to Hollywood-calibre filmmaking tools that won’t blow a shoestring budget. The third generation of DJI’s Osmo smartphone gimbal pairs smooth stabilised camera movements with a much improved compact folding design – and it does it for £30 less than the previous version.

WHAT IS IT?: A smartphone stabiliser that's as easy to use as a camera app.

LIKE: Impressive stabilisation capabilities and a much improved folding design.

DISLIKE: It won't take long for you to feel its weight while shooting.

I’ve been using the previous generation of the product, the DJI Osmo Mobile 2, for a little over a year now with an iPhone and a Google Pixel 2 to make hands-on videos of products. Shooting with a smartphone is convenient because they’re small, light, and easy to handle, but that also works against you when you’re trying to hold them steady.

The DJI Osmo Mobile 2 improved the quality of the smartphone videos I shot by myself, eliminating all of those unintentional jiggles and camera shakes, and it did it at a price (£130) that made it easy to recommend to even friends who just wanted to improve home movies of their kids.

However, it was an unwieldy beast, and that coupled with its bulky carrying case made it a smartphone accessory I never used outside of work. But the new DJI Osmo Mobile 3 is a completely different story and it’s already earned a place in my backpack during family outings. It performs as well as its predecessor does at smoothing out messy camera work, and it does it with a much-improved design that almost makes it feel like an entirely new product.

The DJI Osmo 2 (left) doesn’t do much folding at all, while the DJI Osmo 3 collapses down to less than half the size of its predecessor. (Photo: Andrew Liszewski/Gizmodo)

The carrying case for the DJI Osmo 2 feels like a shoebox, while the DJI Osmo 3 collapses into a pack that’s extremely carry-friendly. (Photo: Andrew Liszewski/Gizmodo)

The biggest improvement, and the feature that I think completely justifies the upgrade, is the Osmo 3's smaller footprint and vastly improved folding design. The main support arm flips backwards and everything twists around so the gimbal ends up more compact when not in use, and the various moving parts are better secured so they don’t flop around as much. It does take a few attempts to figure out how to unfold and collapse the Osmo 3 as the instructions DJI includes are tiny and extremely limited. If you’ve used previous versions of the gimbal it shouldn’t take too long to master the transformation, but new users might want to seek out a bit of extra help with a YouTube video.

The Osmo 3 can now automatically switch between landscape and portrait orientations thanks to a dedicated motor powering the actual smartphone clamp. (Photo: Andrew Liszewski/Gizmodo)

Installing a smartphone is even easier, requiring you to simply centre it in the clamp. But there are also mounts to add counterweights if you’re having balance and performance issues. (Photo: Andrew Liszewski/Gizmodo)

The clamping mechanism that holds the smartphone in place has been streamlined so that installing your device is as easy as just making sure it’s centred in the clamp. The previous version required you to make adjustments with a sliding mechanism to ensure everything was balanced properly, but with the Osmo 3 it’s much easier. I tried three different smartphones of various sizes and they all worked perfectly (once removed from their protective cases) but if you do find you’re having balance and performance issues, the clamp includes screw mounts for adding counterweights as needed. The redesign also ensures your smartphone’s connector is never blocked, so you can use accessories like mics, or keep it charged during a shoot.

DJI has also upgraded the clamp with its own motor so at any point you can quickly switch between portrait and landscape orientations with a double-tap of a button, instead of having to stop and manually readjust the mount by unscrewing a knob.

Everything about the DJI Osmo Mobile 3 feels refined, including the joystick and shortcut buttons which I actually find easier to access using the same hand that’s holding it. There’s also an additional trigger button on the back again, and each of the buttons can perform multiple tasks depending on the number of times they’re tapped. Functionally it’s almost identical to the Osmo 2, but it’s clear that DJI listened to user feedback for all these small improvements that somehow feel more impactful when you actually use them.

Getting the best performance from the Osmo Mobile 3 requires you to pair it with the free DJI Mimo camera app which connects to the gimbal over Bluetooth giving you control over most of its functionality from the shortcut buttons. More importantly, the app also does its own image stabilising which results in impressively smooth results when paired with the gimbal that’s cancelling out larger unwanted motions. As you can see in the above GIF, the footage on the left and middle was shot by simply holding the phone and walking, but where as the stock Android camera app produced bumpy results (left) shooting with the DJI Mimo app (middle) did serve to smooth out the motions somewhat.

But neither can compare to the footage on the right which was captured using the DJI Mimo app and the Osmo 3 working together; the results are impressively smooth for a stabiliser that costs just £99. You can still see the subtle movements of each step I take – the Osmo Mobile 3 isn’t a complete replacement for a Steadicam vest and camera rig that can cost you upwards of £1,500 – but you’re not going to find a cheaper way to improve smartphone videos this dramatically.

The object tracking in the DJI Mimo app isn’t flawless, but it can make keeping a subject in frame much easier. (GIF: Andrew Liszewski/Gizmodo)

The DJI Mimo app has also been updated with a bunch of new modes, including the ability to control the app and the gimbal using hand gestures, which can be useful when the Osmo 3 is mounted to a tripod and you’re filming yourself. But the best update is the inclusion of DJI’s Active Track 3.0 which allows you to draw a box on your smartphone’s screen to define a target, which is then automatically tracked to ensure it always stay in frame. It’s not perfect, we’re not talking the same calibre of technology that allows fighter pilots to automatically track targets, but it works great for a £99 consumer-focused product. The next time you’re jostling for position while filming grandma blowing out her birthday candles, you can quickly define her face as a track pattern and not have to worry about how perfectly you’re maintaining framing – the Osmo 3 will take care of that. 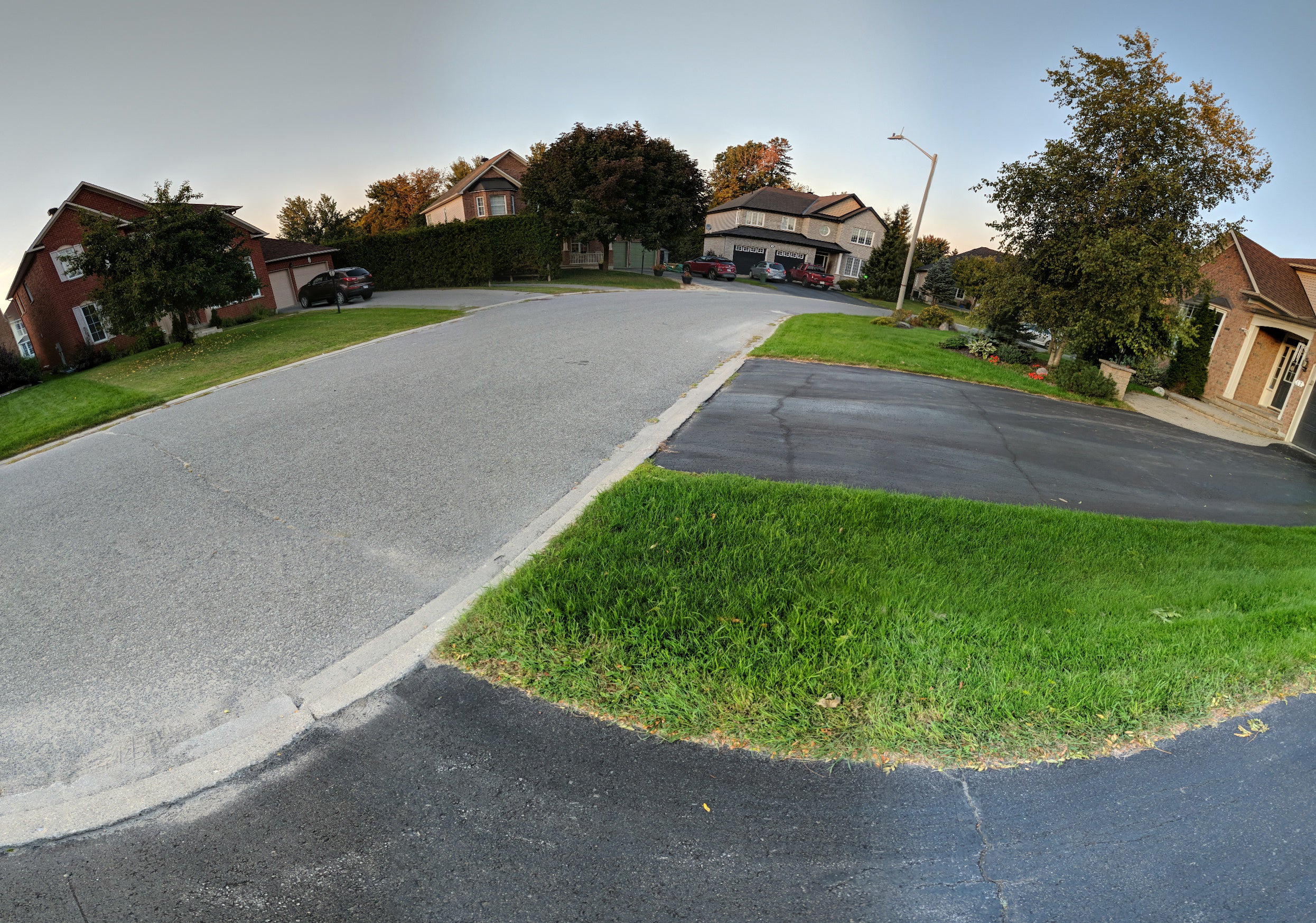 The DJI Mimo app can use the Osmo 3 to automatically capture multiple images and stitch them into a panorama, but the results aren’t exactly great. (Photo: Andrew Liszewski/Gizmodo)

There are, admittedly, a few features I will never use, such as using the Osmo 3 to make automated panoramas as it swings the smartphone around to snap all the images it needs for stitching. The results are not great, and end up with an extreme fisheye effect given the gimbal’s limited range of motion. But everything else DJI has included with the new Osmo Mobile 3 is worth the upgrade. If you shoot a lot of video with your phone it’s an accessory I can’t recommend enough, even if you’re not a professional vlogger and are just capturing vacation memories. And if you’ve already got the Osmo Mobile 2, donate it to an aspiring filmmaker and go buy yourself the new version.