A satirical women’s site that lambasts clickbait content is being suppressed on Facebook because the social media platform determined Reductress was sharing clickbait.

Upon first glance, Reductress stories look like the kind of, well, reductive posts that content mills churn out with the aim of infesting Facebook. Classic Reductress examples include “What Surprised Me Most About Becoming a Parent Was That I Was Forced To by The Government,” “How to Make Your Vagina Look More Like His Man Cave,” and “Dying Woman Finally Achieves Body Acceptance.” It seems Facebook – or its algorithms at least – mistook headlines like that for real clickbait drivel.

As the Verge first reported, Thursday Reductress editor and co-founder Sarah Pappalardo tweeted a screenshot of a notice the site’s account received, showing that Facebook had “reduced distribution because of repeated sharing of clickbait.”

Thank you @Facebook for being on the cutting edge of regulating public discourse. pic.twitter.com/mtcSqGqLnk

In an email exchange with Gizmodo, Pappalardo suggested AI was to blame for the action, but still questioned why Reductress was affected and other satirical sites didn’t seem to be.

“Bad algorithms have resulted in Reductress and actual people to be throttled or even suspended with almost no outlet to challenge the decision,” Pappalardo told Gizmodo. “Given the nature of what we do, especially in relation to sites like Clickhole and the Onion, it’s hard to believe that there isn’t something inherently problematic in deciding that our content is ‘clickbait’ but theirs somehow isn’t.”

(Clickhole and the Onion are satirical sites owned by G/O Media, Gizmodo US’ parent company.) 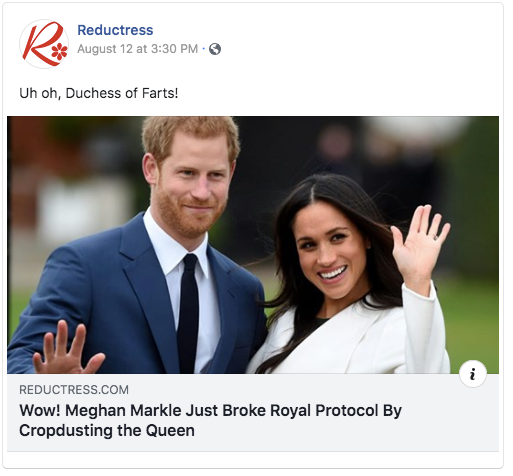 According to Pappalardo, Facebook sent Reductress two examples of articles that the platform deemed clickbait. “Wow! This Ethical Brand Only Sells One T-Shirt But They Worked Really Hard On It” and “Wow! Meghan Markle Just Broke Royal Protocol By Cropdusting the Queen,” which was posted on Facebook with the share text “Uh oh, Duchess of Farts!”

Pappalardo said that Facebook only gave the option to check a box to “challenge this decision,” and wasn’t sure what else they could do to fight the decision.

While the fine writers at Reductress await the results of the appeal, let’s hope no one at the social network sees the article, “We All Need to Stop Having Sex With Mark Zuckerberg Until the Government Breaks Up Facebook.”