Volcanic eruptions are typically associated with death and destruction, but the recent eruptions on Hawaii’s Big Island resulted in an unexpected biological boom – a gigantic plume of algae extending for hundreds of miles into the Pacific Ocean.

From May to August 2018, an ongoing eruption at Hawaii’s Kilauea Volcano resulted in the pouring of millions of cubic meters of molten lava into the North Pacific Ocean. The eruption wreaked havoc for local residents, who worried about toxic gas plumes saturated with hydrochloric acid and glass particles. But the slow and tedious effusive eruptions at Kilauea resulted in something rather unexpected: a large bloom of surface-dwelling, photosynthetic microbes known as phytoplankton.

New research published last  week in the journal Science describes this bloom and how the copious amounts of molten lava, at temperatures reaching 1,170 degrees Celsius, triggered its unexpected appearance.

The study, co-led by Sam Wilson from the University of Hawaii (UH) at Manoa and Nick Hawco from the University of Southern California (USC), improves our understanding of phytoplankton blooms and the conditions under which they form (very important given the sudden surge in algae blooms!), while showcasing a previously unknown mechanism responsible for fuelling phytoplankton growth.

A mere three days after the Kilauea eruptions started, scientists spotted the phytoplankton bloom in satellite photos in the form of a large green blob of chlorophyll – a light-harvesting pigment used by phytoplankton to carry out photosynthesis. Researchers from the UH Manoa Center for Microbial Oceanography: Research and Education (C-MORE) sprang to action, chartering the research vessel Ka‘imikai-O-Kanaloa and sailing out to the site to analyse the bloom and study its effects in real time. It was an unprecedented opportunity to study a nutrient-poor marine ecosystem and evaluate its response to a sudden and massive inflow of molten lava. 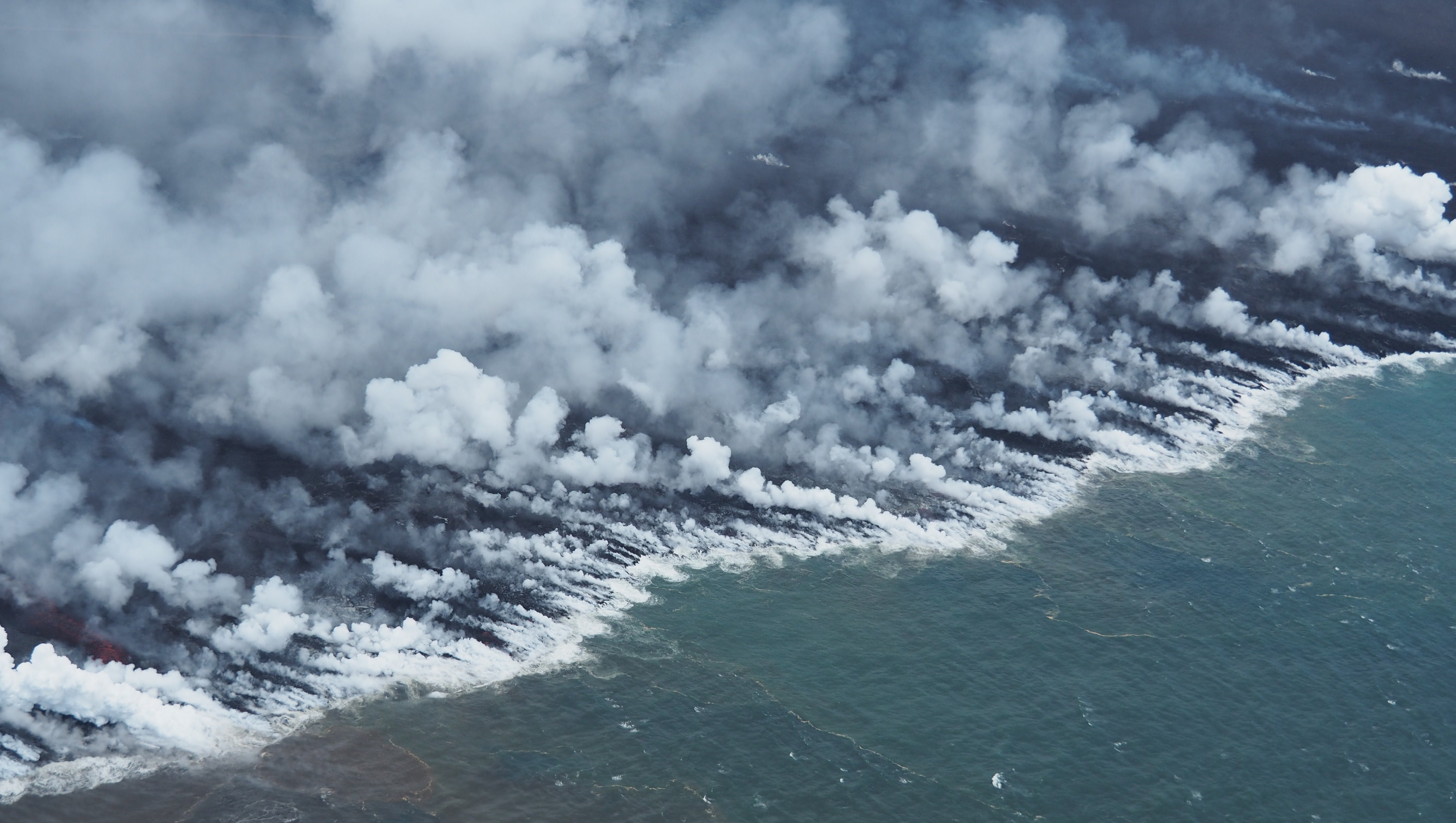 From 13 to 17 July 2018, while Kilauea was still in the throes of its prolonged temper tantrum, the researchers measured water chemistry and biological activity in the areas near where the lava was pouring into the ocean. Back at the lab, the team, with help from USC scientists, learned that the process was considerably more nuanced than just the introduction of warm water and molten lava.

As their lab experiments showed, a key component of the process involved high concentrations of nitrate. Trouble is, basaltic lava is basically devoid of nitrogen – a natural fertiliser of both terrestrial and aquatic plant life.

“There was no reason for us to expect that an algae bloom like this would happen,” Seth John, a co-author of the study and a geologist at USC Dornsife, said in a USC press release. “Lava doesn’t contain any nitrate.”

Instead, the hot lava churned the environment near the seafloor, forcing nutrient-rich waters to the surface. The phytoplankton living at the top, sunlit ocean layer were suddenly gifted a veritable Jacobean Banquet of nutrients, resulting in a feeding frenzy that led to the algae’s dramatic growth.

“We hypothesise that the high nitrate was caused by buoyant plumes of nutrient-rich deep waters created by the substantial input of lava into the ocean,” the study authors wrote.

Indeed, the expansive green plume was suddenly packed with the necessary ingredients for algae growth, namely high levels of nitrate, silicic acid, iron, and phosphate. Interestingly, this same kind of upwelling of nutrients from deep waters happens naturally along the California coast as a consequence of strong ocean currents, rather than the effects of scorching hot molten lava. 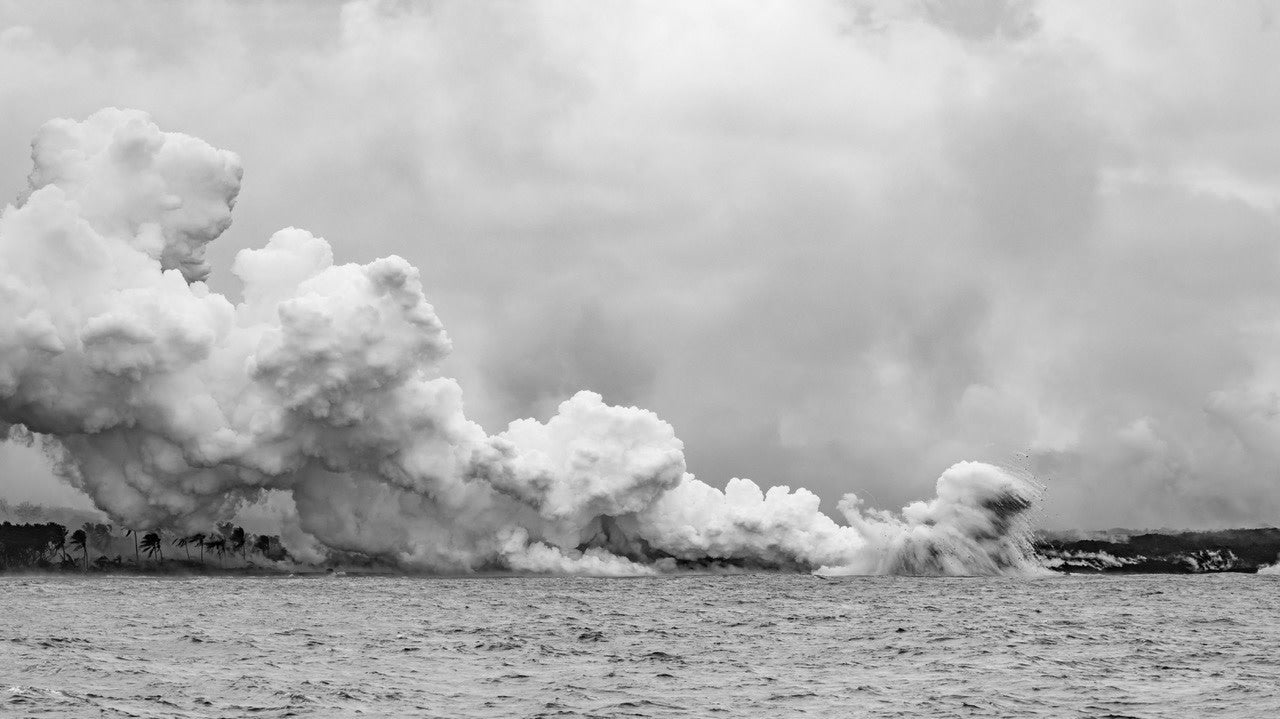 The finding “improves our understanding of lava-seawater interactions within the much broader context of land-ocean connections,” said Wilson in a UH press release.

Three weeks after the eruptions started, the blooms, quite incredibly, extended outward for nearly a hundred miles off the Hawaiian coast. In the months that followed, the plume grew further still. The plume continued to linger as the eruptions continued, but it quickly disappeared once the lava stopped flowing into the ocean. For the phytoplankton, the party was suddenly over.

An ocean fertilisation event of this nature has never been documented before, but it’s possible this process has occurred elsewhere, both in Hawaii and other volcanically active areas. Speaking to the New York Times, Harriet Alexander from the Woods Hole Oceanographic Institution, who’s not affiliated with the new study, said volcanoes “could be a pretty important driver of phytoplankton ecology in the broader ocean.”

Looking ahead, the researchers would like to analyse the pools of water that now appear along the bottom of the volcano’s crater floor. There’s still lots to learn about volcanoes’ surprising ability to foster life.