Listen up, ya dinks! The Good Place is about to begin its final season. It’s a bittersweet situation: The best comedy on TV will be no more, but it also means the show will be ending exactly as its creators intended. Ahead of this week’s season four premiere, here’s your catch-up crash course in all things Good.

Just in case you haven’t made it all the way through seasons one, two, and three yet, here’s one of these: 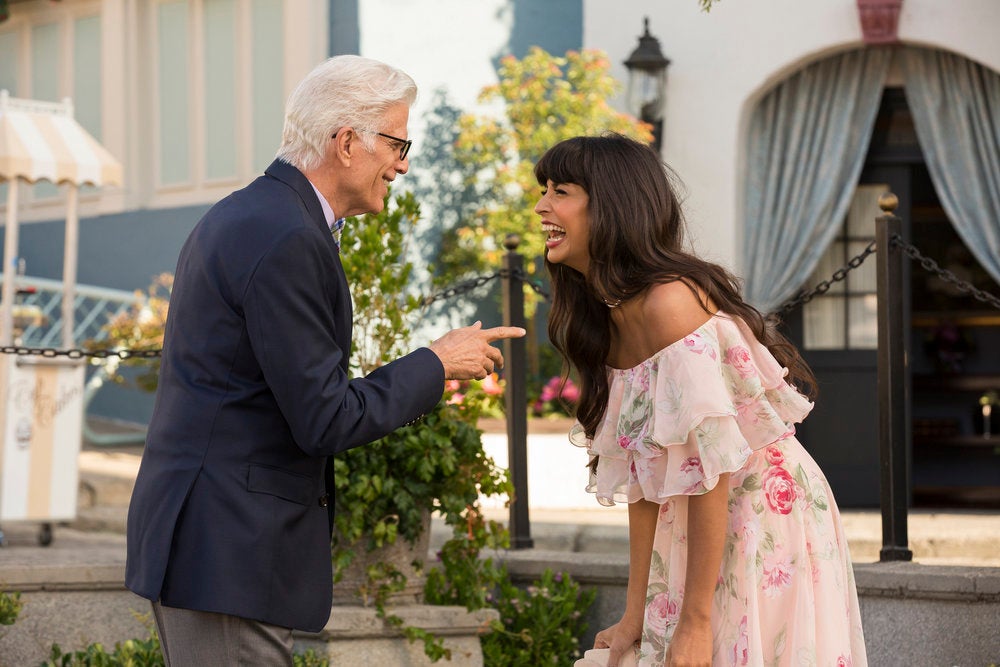 What’s happened so far: season one

Broadly, The Good Place is about what really happens after you die  – but it’s really about the wild, unpredictable essence of what it means to be human. Most of it takes place in an afterlife governed by strict rules that nonetheless have a certain amount of wiggle room, as the characters come to realise. However, as of the end of season three, there are three main Places: The Good Place (which we haven’t actually seen, aside from the mailroom), the Bad Place, and the Medium Place.

As the series begins, a shrimp-loving telemarketer named Eleanor (Kristen Bell) dies and finds herself welcomed into the gloriously perfect Good Place by immortal being and Good Place architect Michael (Ted Danson), along with all-knowing AI assistant Janet (D’Arcy Carden). Since Eleanor knows she was a cruel, selfish person back on Earth, she realises instantly there’s been a mistake. Most of season one sees Eleanor trying to figure out how to keep up her deception with the help of her designated “soul mate,” neurotic professor Chidi (William Jackson Harper), who agrees to tutor her in moral philosophy to help her become a better person, and the “soul mates” next door: endearingly snobby heiress Tahani (Jameela Jamil) and Buddhist monk Jianyu – real name: Jason (Manny Jacinto), who’s actually an endearingly stupid wannabe DJ – who soon become drawn into her plight.

At the end of season one, we learn that Michael is really a demon who designed what is actually a fake version of the real Good Place for the sole purpose of torturing these four specific humans. He’s trying to expand the definition of torture, you see, and he succeeds brilliantly...until he doesn’t.

When Eleanor figures it out, Michael has no choice but to “reboot” his scheme – erasing the humans’ memories and trying again—since he desperately wants his sinister experiment to succeed.

Season two sees Michael attempting multiple reboots, but every time he does it, Eleanor eventually realises they’re actually in the Bad Place. (Even the dunderheaded Jason figures it out once, to Michael’s epic chagrin.) With Michael catching heat from his demonic co-workers – who threaten to tattle on him about his string of failures to their even more demonic supervisor, Shawn (Marc Evan Jackson) – he’s forced to team up with the humans, and even starts to sympathise with them when he joins Chidi’s “how to be a better person” philosophy study group.

At the end of season two—with the Bad Place itching to declare victory over that turncoat Michael and his four pet humans—the fugitives (plus Janet) manage to land a meeting with the all-powerful cosmic Judge (Maya Rudolph). She agrees to send the four humans back to Earth moments before their respective deaths. Michael swoops in to save them, giving each a second chance, and a new experiment begins.

This time, Michael will see if the humans – who really did improve as people in the fake Good Place, thanks to the power of friendship and all those philosophy lessons – can also become better while they’re alive. The goal, he reasons, is for them to rack up enough divine “points” to reverse their Bad Place destinies when they eventually die again. 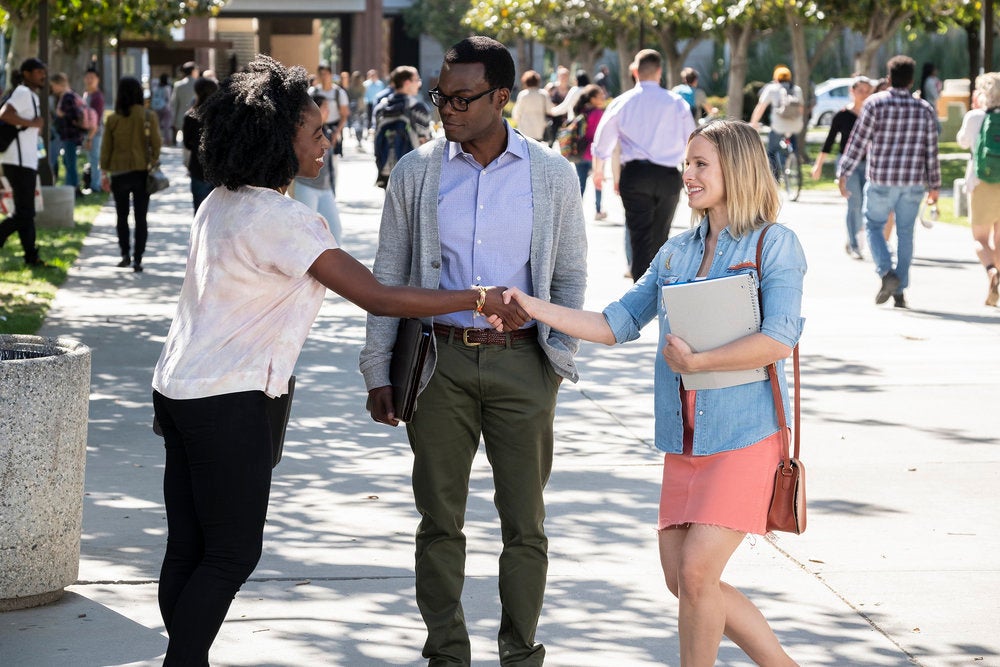 Of course, nothing is ever that easy – and season three presents more complications than anyone could have ever imagined. Michael’s manipulations from afar nudge Eleanor, Chidi, Tahani, and Jason – now total strangers, blissfully unaware of the truth about the afterlife – back together as part of Chidi’s thesis study on people who’ve just had near-death experiences. Chidi’s new girlfriend, neuroscientist Simone (Kirby Howell-Baptiste), agrees to help him run the study, and things seem back on track...for a minute.

Bad Place sabotage briefly arrives in the form of irritating demon Trevor (Adam Scott), but Michael begins to suspect there’s a larger conspiracy against humanity at play, as the action jumps around the globe. In a fun series of episodes, the humans, who’ve upgraded their group name from “Team Cockroach” to “Soul Squad,” try to help their troubled loved ones become better people, which broadens our understanding of all the characters. But before long, they’re again on the run from demons, first into Janet’s “void space,” and finally back into the afterlife. So, everyone’s dead again. But where are they going to go now? 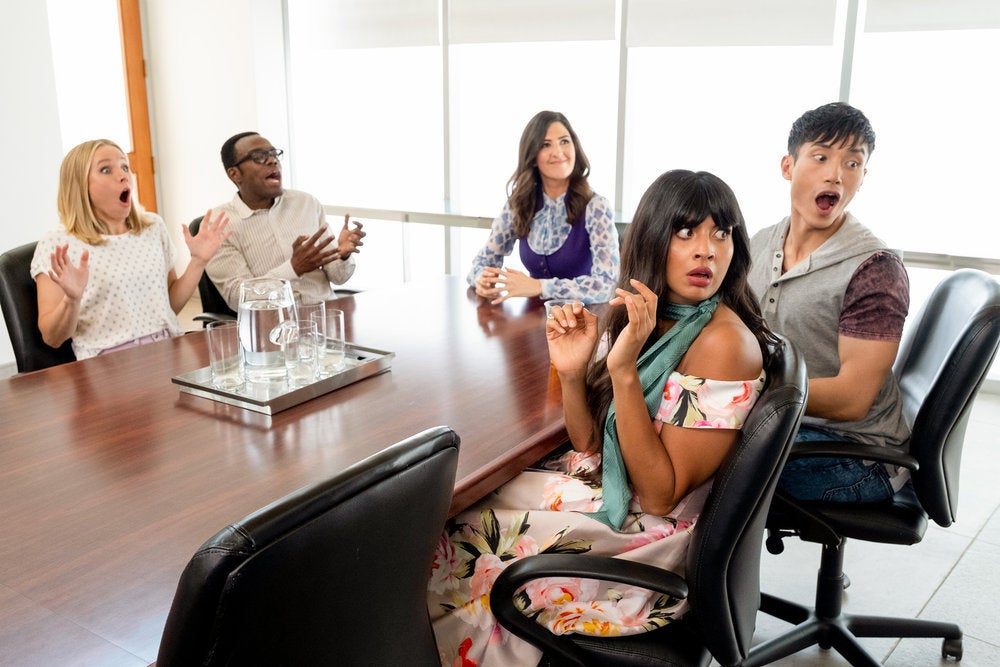 As season three progresses, Michael begins to believe that the Bad Place is tampering with the point system – which seems like a valid concern until he realises that the point system itself is the problem. Modern life has become so complicated that even the most saintly intentions are cancelled out by other elements that wannabe do-gooders have no way of controlling. On a press tour last month, The Good Place showrunner and creator Mike Schur spoke about how the show’s moral message has changed as its main characters have evolved:

I thought at the beginning that the show could, if given the chance, describe what it meant to be a good person. That was my hope. And that didn’t mean “Do this and not that.” It meant “Here’s what a good person looked like in the world. Here’s how a person can feel like he or she led a good life.” At the end of the day, that objective kind of shifted...

After taking her own trip to Earth, the Judge sees Michael’s point, so she loops in Shawn from the Bad Place to arrange one final experiment that’ll test humankind’s ability to try to be better. 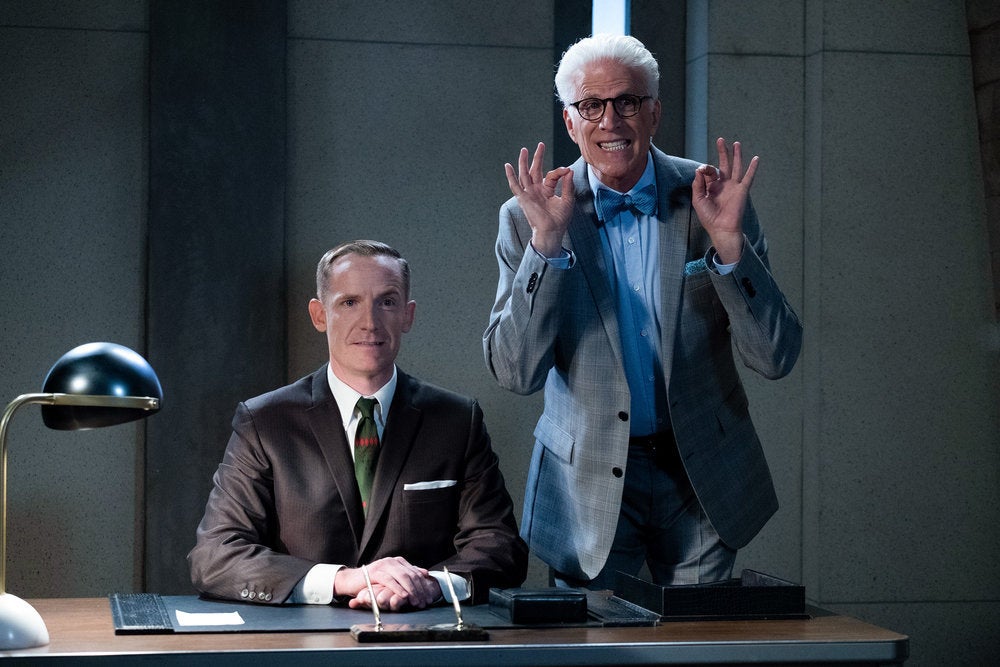 With the fate of the human race at stake – more specifically, the chance to save billions of genuinely decent people from an eternity of torture in the Bad Place – the humans saddle up for Michael’s last stand. He and Janet design a brand-new neighbourhood in the neutral Medium Place and populate it with people created by Janet and Derek (Janet’s dopey rebound boyfriend, who she created after it didn’t work out with Jason in one of the season two reboots; he’s played by Jason Mantzoukas).

Four humans – carefully chosen by Shawn and his Bad Place team – will arrive and, much like the original four, hear Michael’s Good Place welcome speech. Eleanor, Chidi, Jason, and Tahani will be on hand to help the unaware new subjects become the best versions of themselves. But, of course...there are complications. First, Michael has a nervous breakdown when Shawn reveals that if he fails, the four original humans’ Bad Place torment will be at the hands of an evil Michael lookalike. 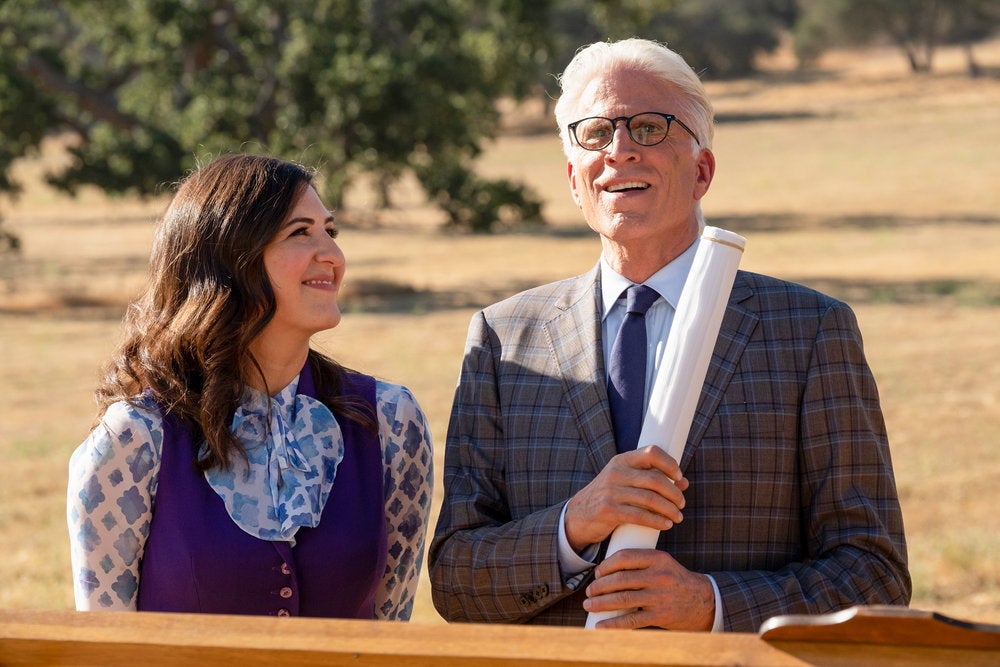 So Eleanor, who remembers in the nick of time that she was always good at lying, steps in to play the Good Place architect. The first Bad Place-selected new resident turns out to be a gossip columnist whose favourite smear target in life was Tahani. That’s unpleasant, but the second human is someone even dicier: Chidi’s lovely ex, Simone.

One of the running subplots on The Good Place is that in at least one version of the timeline, Eleanor and Chidi fell deeply in love – and by the end of season three, it had finally happened again. But with Simone entering the mix, Chidi knows his overwhelming anxiety will be a roadblock to the experiment’s success. So he insists that Michael, who has already wiped Simone’s memory of ever meeting Chidi, Eleanor, Jason, and Tahani, wipe his memory too. After a tear-filled farewell-slash-breakup, Chidi wakes up with no memory of Eleanor, who’s, of course, still in love with him.

We don’t yet know the identities of the other two humans – a reveal the show’s saving for the season premiere, no doubt – but they’ll probably be people picked specifically to push Eleanor and Jason’s buttons. What will happen in the end? If there’s one thing we know for certain, it’s that The Good Place will do something we never anticipated – and it’ll end up being the smartest, funniest, and most poignant choice for the show and its characters.

Why you should watch

As you can tell from that wall of text that’s nearly as long as Chidi’s ever-changing dissertation, the plot of The Good Place is already more creative than most any other TV comedy that’s ever come before. But its committed attention to detail – in both its dialogue and its worldbuilding – really elevate its genius. This goes for its in-depth explorations of philosophy and the complexities of relationships, to its running in-jokes (will Jason’s obsession with NFL quarterback Blake Bortles finally yield a cameo, now that Bortles plays for the LA Rams instead of the Jacksonville Jaguars??), to its funny observations about 21st century culture, to its own charmingly specific absurdities (as with the various punny names of the Good Place neighbourhood restaurants, which change from version to version but always serve the same genre of food: Custard’s Last Flan, Panna Cotta da Vida, I Tought I Saw a Puddin’ Vat, A Few Pudd Men, Puddington Bear). 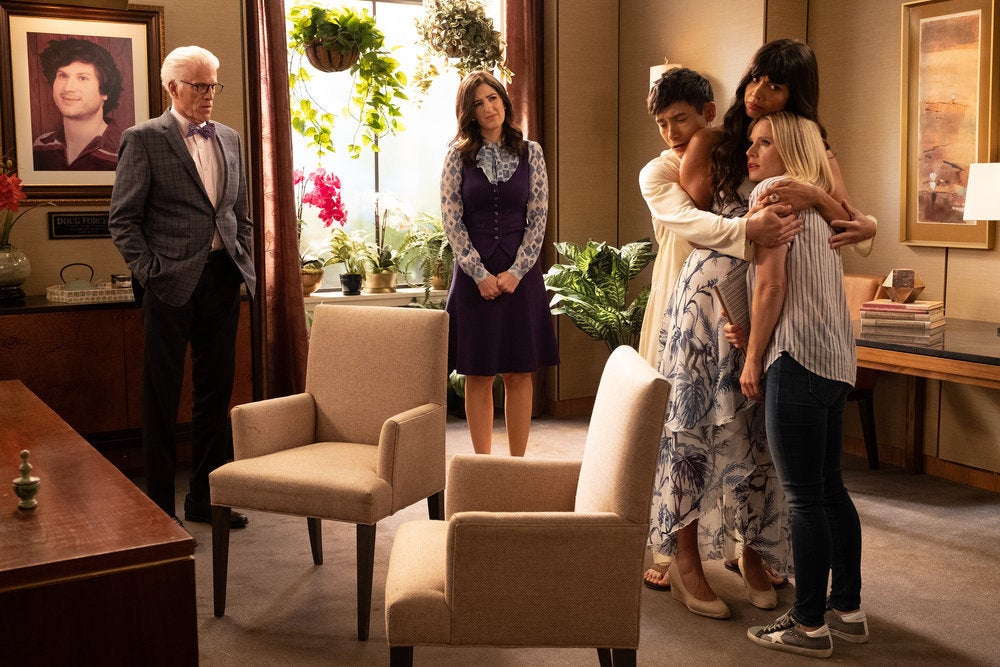 All of these people are me, thinking about how season four is the last season of The Good Place. (Image: Colleen Hayes/NBC)

Most importantly, in addition to being a wonderfully entertaining series with a brilliant cast – more than any show on TV, The Good Place literally has the potential to make you a better person. It definitely makes the world at large a better place just by existing.