Last week, Star Wars: Galaxy’s Edge opened in Walt Disney World, bringing an unprecedented theme park experience to the citizens of Orlando, Florida. Eat the food and drink of a galaxy far, far away! Hop aboard an iconic Star Wars ship! Live in a fantastical world, populated by people in character, an immersive experience! It’s unlike anything we’ve seen before.

Except when Star Trek did it 20 years ago.

Yes, Batuu may be the “it” planet right now, but two decades before we frothed over Bespin Fizzes, and gawked at being able to board the Millennium Falcon, Star Trek: The Experience basically did what Disney has now poured millions of dollars into doing across its theme parks with Star Wars. In the endless absurd debate between Wars and Trek – why are we fighting, they’re both pretty good! – it’s perhaps a most peculiar example of the latter beating the former to the punch by a significant margin. 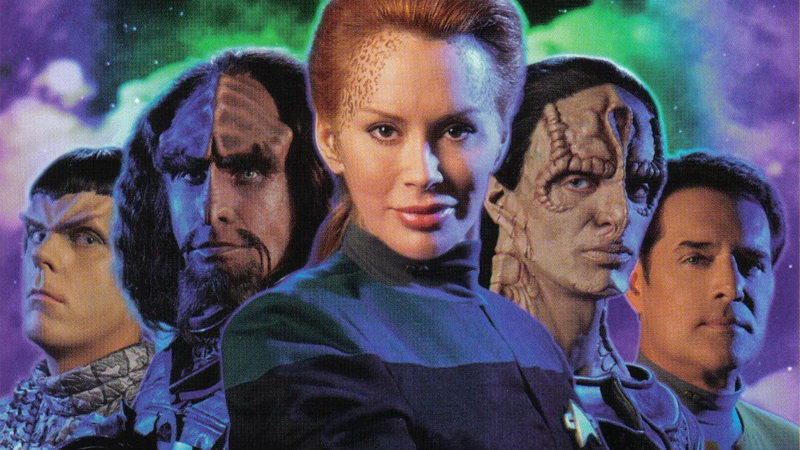 First opening at the Las Vegas Hilton in the US state of Nevada in January of 1998, Star Trek: The Experience was in many ways a sort of early amalgam of all of Disney’s current Star Wars theme park experiences. There was a museum section, akin to Launch Bay, full of timeline displays and props from the shows and movies, and not one but two rides mirrored Star Tours and the modern-day Smuggler’s Run, whisking an audience away from the confines of then-present Nevada to the far future of the 24th Century.

The Klingon Experience and The Borg Invasion 4-D both mixed and matched sequences of themed immersion with live performers (and in the latter’s case, new footage filmed by Voyager stars Robert Picardo and Kate Mulgrew) with simulator vehicle rides and 3D movies, respectively. Hell, there was even a recreation of Deep Space Nine’s promenade for you to wander around and shop in, or, just like Oga’s Cantina in Galaxy’s Edge, partake in a themed tipple or two in Quark’s bar.

The Klingon Experience was perhaps the closest Star Trek: The Experience really came to doing what Galaxy’s Edge champions as its unique selling point. The ride saw clever set changes and simulators recreate a group of passengers being beamed over to a replica of the Enterprise-D set from The Next Generation, Visitors would then go on a timye-wimey adventure in which one member of the group was actually revealed as an ancestor of Jean-Luc Picard, and their survival to maintain the timeline drove an adventure that saw the Klingons attempt to erase you and Picard from history. In the same way something like Rise of the Resistance hopes to transport Disneyland visitors into an adventure right out of the Star Wars movies, The Klingon Experience was like being dumped into an episode of Star Trek for a bit.

It’s kind of amazing Star Trek: The Experience existed at all, let alone at the time it did. In the late ‘90s, Star Trek was perhaps hitting the tail end of its peak. The Next Generation was long over, although the movies were still coming out. Deep Space Nine would conclude in 1999, and Voyager a few years after. And although Voyager’s end was shortly followed by the launch of Enterprise, The Experience was never updated to match the then-current series. It was like a living testament to that heady heyday of three different Star Trek franchises boldly going their own way...some more well-received than others.

And so it would remain that testament, even as the Trek franchise itself weathered a wayward storm. Nemesis killed off the movies as it and its bald baby Tom Hardy lumbered onto screens in 2002. When Enterprise came to an abrupt end in 2004, with no future show to follow up on the horizon, it felt like the TV side of things had followed it into the ether – and it had until now, when it feels like there’s almost too much on the way!

Yet through it all, Star Trek: The Experience held fast, carving its own little corner of Las Vegas out for itself, amid the glitz and glamour of the typical casinos and neon-lit shows you would associate with the city – not exactly a renowned geeky mecca. You might not have been able to watch new adventures on the big screen or on TV, but you could still pop down to Quark’s for a Warp Core Breach or two, or a nibble at Garak’s secret mac and cheese. What secret would Garak possibly hide in macaroni? I don’t know, but probably a delightful one, I reckon. Some truly sordid gossip about a Cardassian Gul or two. But the fact you could attempt to find out for yourself, even in a world where it felt like Trek was over, is just as delightful a thought.

Soon enough, The Experience would follow the movies and shows into that good night. Although the rebooted J.J. Abrams film was almost on the way, Star Trek: The Experience shut its turbolift doors for the last time in September 2008, and even its sendoff was in character, done in the style of a Starfleet decommissioning ceremony.

I never went to Star Trek: The Experience when it was running – an ocean away as a teen Trekkie, all I had was the ability to stare at its bizarre existence from an extreme distance, thanks to Star Trek: Voyager DVD boxsets containing featurettes about the attraction back in the early aughts.

But in a world where Galaxy’s Edge proves there’s a place for an immersive experience like that – as long as you had, say, the backing of an all-powerful megacorporation that gobbles brands and studios like most people would a tube of Pringles, albeit with less guilt – maybe there’s a place for Star Trek to return to the idea now co-opted by its longtime “archnemesis.” You could argue it’s done so in fits and starts already, putting the feelers out with a Discovery location-based VR experience on the way and the Picard museum pop-up at San Diego Comic-Con this year. With more Trek than ever being made, why not?

Whether or not a second Experience ever happens, it’s funny to think as people flock to the chance to swig on blue milk and pick up a kyber crystal or six, Star Wars’ nerdiest competitor beat it to the punch so long ago.