Hurricane Dorian’s devastation has killed at least 30 in the Bahamas. All this death has a distinct smell, Sam Teicher said. The founder of Coral Vita, a coral-growing operation based Grand Bahama, had that awful, hair-raising stench in his nose all day on Thursday as he drove around trying to help those in need. Only one other odour was able to distract Teicher from the lingering odour of death: oil.

Hurricane Dorian left the Equinor South Riding Point oil facility in High Rock, which sits on the island’s southern coast, in shambles. The hurricane struck the Bahamas as a Category 5 storm with winds of 185 mph. That wind – as well as the rain and storm surge – caused major infrastructure damage across the island, and the oil facility wasn’t spared. The hurricane damaged the terminal’s onshore tanks leading to an oil spill, according to a Thursday update from Norway-based Equinor. The company hasn’t confirmed whether any oil has made it out to sea, but the oil is seemingly everywhere on the land closest to the facility.

Teicher saw the damage firsthand Thursday. He drove past the facility on his way to cut-off communities on the island’s east end. The tanks’ white domes and sides were stained black. Several of the domes that top the tanks were gone, Teicher said. Oil was soaking into the soil, lying across the highway, and covering a now-flightless bird. He described the smell as what one would encounter at a petrol station.

“I didn’t smell the oil until we got closer to the slick on the highway, but once you were there, it was pretty apparent, which is saying something considering that earlier and later in the day, you could definitely smell death from the hurricane,” he said. “So to be distracted from the smell of death by the smell of oil was quite a transition.”

Teicher and his colleagues documented all this damage and posted a video to Twitter. Equinor is mobilising a cleanup team to the island “as soon as possible,” according to its release. Poor road conditions and continued flooding are complicating its efforts. We have reached out to the company for details and will update if we hear back.

Absolutely CATASTROPHIC #oilspill in #GrandBahama from #HurricaneDorian at the #Statoil / @Equinor facility. Teams need to be here TODAY to a) prevent a fire from starting (oil across the highway where people are trying to help) b) stop any/all spillage to ocean and c) clean up pic.twitter.com/8u3e2BDYdY

The main concern whenever an oil spill happens is environmental contamination. Petroleum is toxic, and water is limited on Grand Bahama. The population is almost entirely dependent on its aquifers to supply drinking water, and the water table on these islands is usually near the land surface. If oil reaches the groundwater, it’ll spell trouble for the many communities that depend on it.

A satellite image shows the extent of the spill here. You can also see where domes are missing. (Image: ©2019 Maxar Technologie)

There’s also the effect this spill could have on marine life – which people depend on for both food and their economy. Teicher has grave concerns over these potential impacts given how close to the ocean the facility is. Corals lie in the waters near that coast, he said. They help support the greater ecosystem, which provides the fish that many Bahamians rely on for their meals and livelihoods. Plus, corals are key to protecting islands from the power of hurricanes. They serve as natural sea walls to reduce the force of waves when they hit the shore. The hurricane has almost certainly caused some damage to these reefs and any oil contamination could cause further degradation.

“Protecting, nourishing, rebuilding coral reefs – and also mangroves and other coastal ecosystems – is critical because it saves people’s lives,” Teicher said. “They feed people. They provide jobs. This is not just an ecological tragedy, but, especially in the context of coral reefs dying all around the world, it’s a socioeconomic tragedy, as well.” 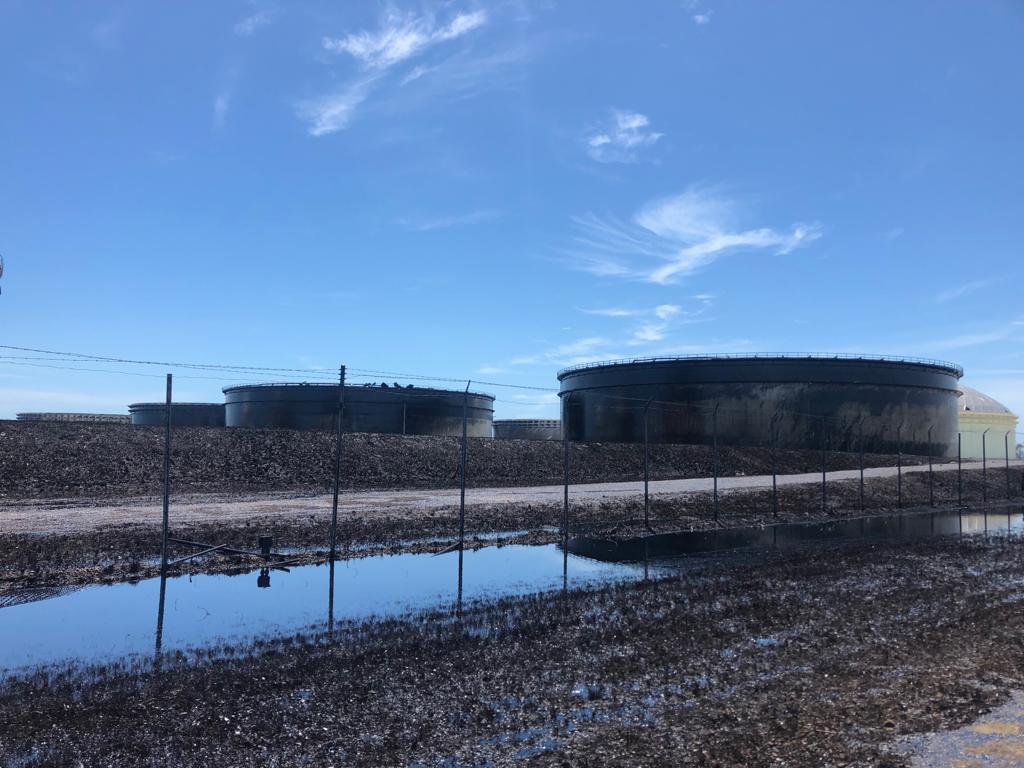 The oil is just everywhere. And these tanks are missing the domes, which typically cover the oil. (Photo: Sam Teicher/Coral Vita)

Even without the threat of an oil spill, water quality usually diminishes after a major storm in the Bahamas, said Kathleen Sullivan Sealey, an associate professor of biology in the University of Miami. Organic matter and contaminants, inevitably, reach the harbour and shore waters. They can lead to algae blooms and resulting dead zones. The last thing delicate ecosystems need to be dealing with is another contaminant.

We don’t yet know how much oil has spilled from Equinor’s facility, but we don’t need a number to know clean up won’t be easy.