After launching its ridiculous Predator Thronos “gaming chair” last year, a common refrain Acer heard from hopeful buyers was they regretted they couldn’t plop down the £25,000 for the damn thing as it wouldn’t fit in their homes. This year, Acer says its successor, the $14,000 (£11,354) Predator Thronos Air (UK pricing and availability TBA), is way more “accessible” thanks to a 25 per cent reduction in weight, smaller footprint, and added massage feature.

I got to check out the Predator Thronos Air in person, and having done so, it’s apparent Acer and I do not agree on the definition of accessible.

The original Thronos felt like your typical trade show stunt. A perfect example of something Acer built because they could and it would generate buzz that could trickle down to its other products. The existence of the Thronos Air makes me question whether Acer is aware that’s what it was. It very earnestly feels like the company thinks this is something more than a handful of weird millionaires want to buy.

On the floor, I chatted with an Acer representative about why the company felt the need to even come out with a successor to an obvious niche product. That representative told me it really was about listening to user feedback and making a chair that wasn’t just a concept. “The Thronos Air,” the rep told me with a straight face, “this is the chair that people can actually buy and put in their homes.” He went on to tell me that Acer had actually had several potential buyers willing to fork over £25,000, if not for the fact their homes couldn’t physically support the chair.

If you scroll to the bottom of the original Thronos’ US product page, you’ll find some fine print. The chair requires an area that measures 8 feet by 8 feet by 8 feet, a floor that can support at least 715 pounds, and it must be installed on the ground floor of a household or “similar environment.” So no flat dwellers, no penthouse suites, and I guess your mansion needs its own RGB gaming cave on the ground or basement floor. Honestly, the mental image of the Thronos crashing through multiple floors of a house is equal parts funny and horrifying. 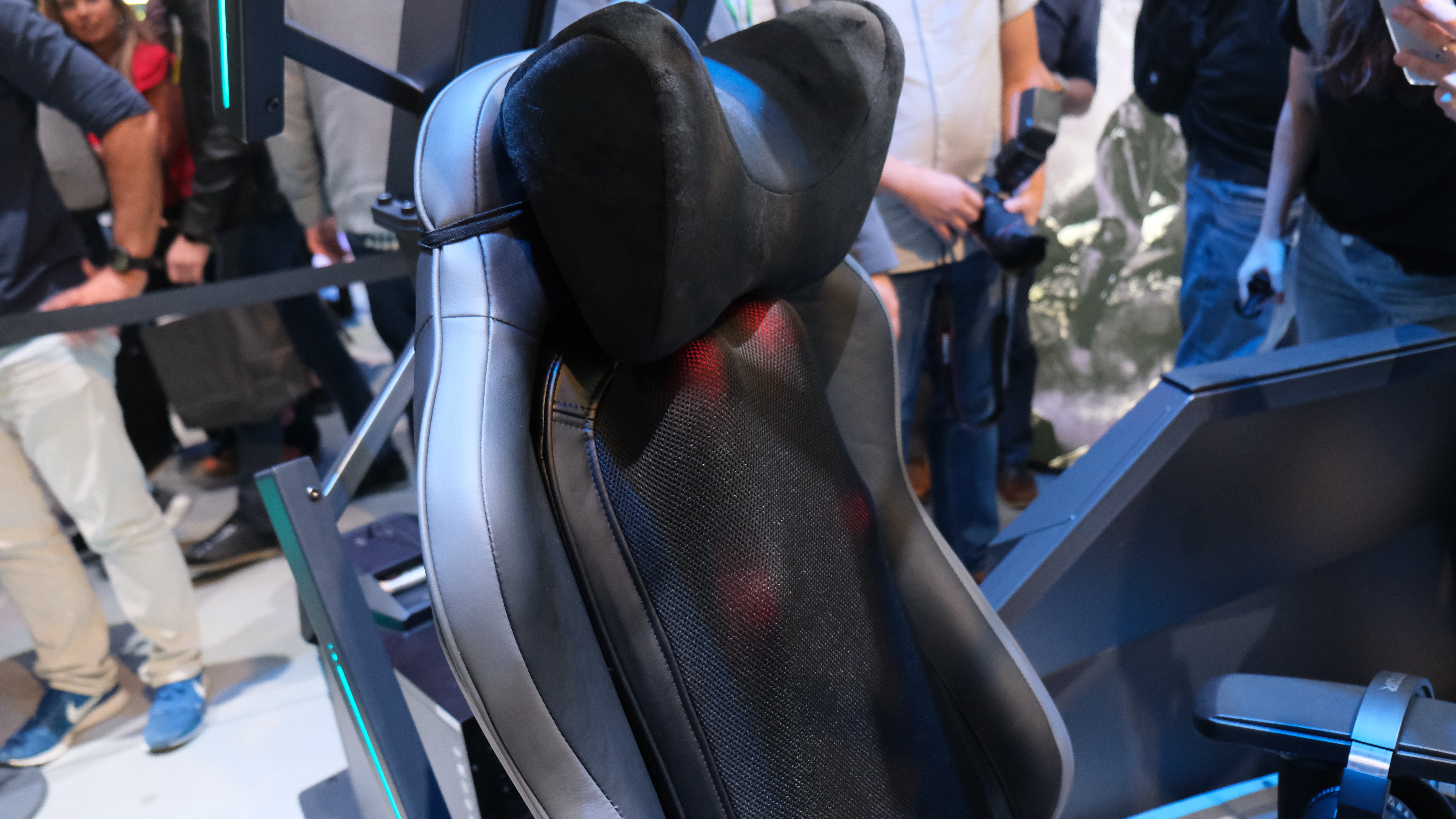 This chair will give you tender, loving ministrations for the low, low price of $14,000 (Photo: Victoria Song/Gizmodo)

The Thronos Air was meant to alleviate some of that while keeping the decadent indulgence of the original. The Acer rep told me it’s made of lighter materials, hence why it weighs 25 per cent less. (Though, if maths serves, that means you need a floor that can support 536 pounds. That’s hardly Air-like.) And as an added bonus, they added a massage cushion, because if you’re going to spend a year’s worth of my rent on a chair, why the fuck not.

As you might imagine, as soon as the press conference ended, the new Thronos Air was swarmed by sweaty tech journalists elbowing each other for the novelty of gaming for a few minutes while having their backs massaged by this monstrous contraption. I, thinking myself clever, snapped some shots, asked my questions, and scheduled a private booth tour to check out the Thronos Air later. Better photos, no crowds, a chance to shoot video, and really formulate my thoughts and impressions. 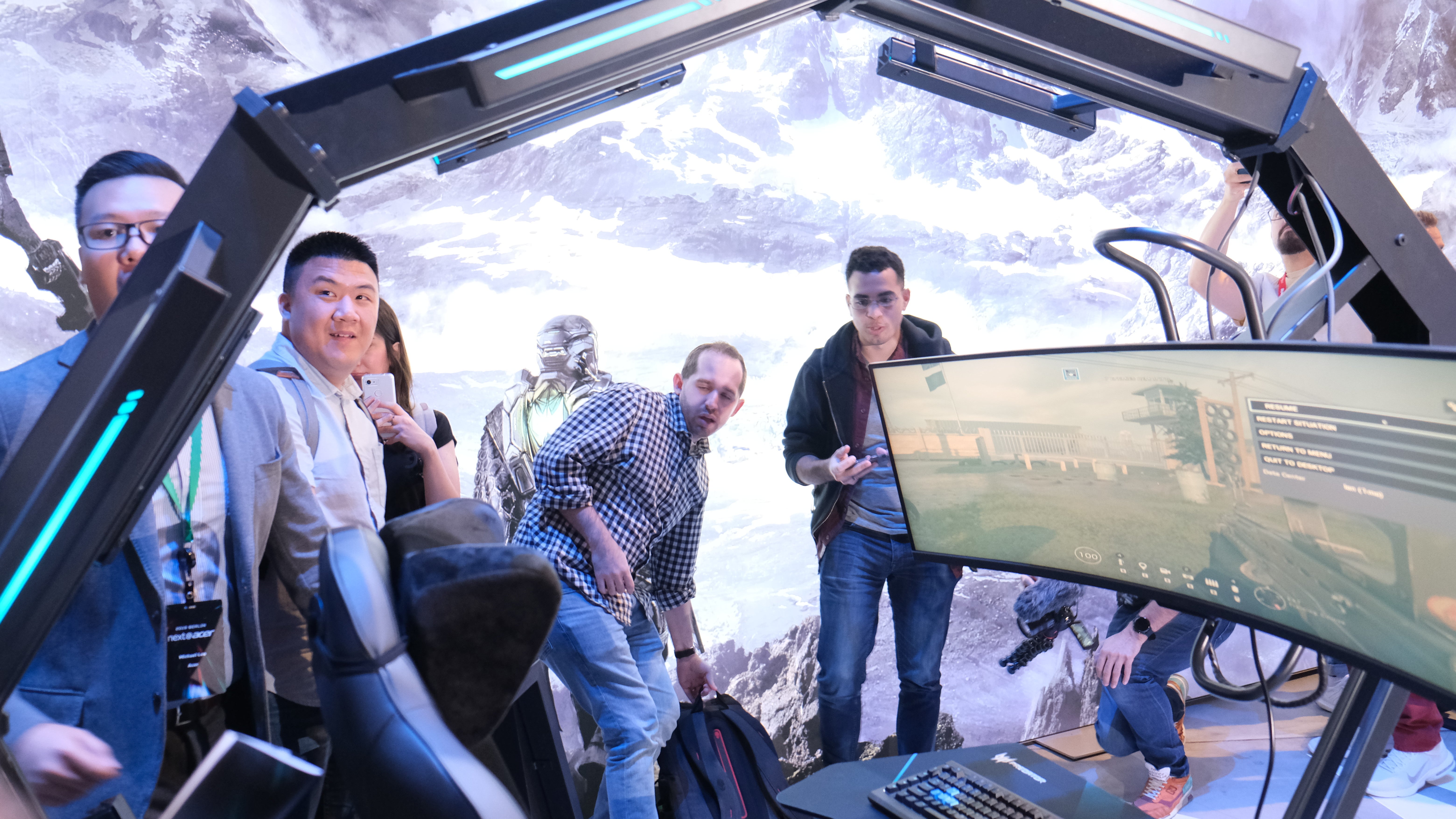 I thought I’d have more time with the Predator Thronos Air. Alas, it was too thicc to move to the showroom floor. (Photo: Victoria Song/Gizmodo)

Here’s the funny thing. When I showed up for the booth tour at Messe Berlin, I got some sad news. The Predator Thronos Air would not be available on the showroom floor. After the press conference, it was dismantled and shipped elsewhere. The process had apparently taken 3-4 hours, and given the weight, it just wasn’t worth the effort to transport it from a few halls down and up some stairs. It’s not that it couldn’t be done. There’s an original Thronos in the booth (though to be fair, Acer probably has more than one of those). Someone somewhere decided the more “accessible” version just wasn’t worth it, and you know what, I don’t really blame them.

A few months ago, Gizmodo bought a DIY custom 8-monitor rig off Craigslist for $640 (£519). It’s admittedly lacking in RGB lighting and cupholders, and there’s definitely no massage component. The original owner only spent $2,300 (£1,865) and a couple hundred hours to build something that functionally, is similar to the Acer’s Thronos chairs. Mayhaps the lesson here is if you can’t resist the thrall of multiple monitors, at least check Craigslist before shelling out $14,000.