The discovery of a nearly intact skull in Ethiopia is the first to show the facial characteristics of a critically important species linked to early hominin evolution. At the same time, the 3.8-million-year-old fossil is further complicating our understanding of Australopithecus—the genus that likely gave rise to humans.

Before the rise of Homo there was Australopithecus, a genus that lived in Africa from between roughly 4 million and 2 million years ago. The first fossils of Australopithecus were discovered in South Africa 95 years ago, and the genus is now known to encompass at least five species: anamensis, afarensis (known by the famous Lucy fossil), africanus, sediba, and garhi. It’s highly likely that one of these species – we still don’t know which one – spawned the Homo genus to which we belong. Frustratingly, the fossil record of these early hominins is exceptionally sparse, leading to tonnes of ambiguity on the matter.

Two new papers published last week in Nature describe the discovery of nearly complete A. anamensis skull, signifying a critically important addition to the fossil record and the study of human origins. Previously, this species was only known from odd bits of teeth and jaw fragments, so this new cranium, uncovered at the Woranso-Mille site in the Afar region of Ethiopia, represents a major leap in our understanding of this early australopithecine. 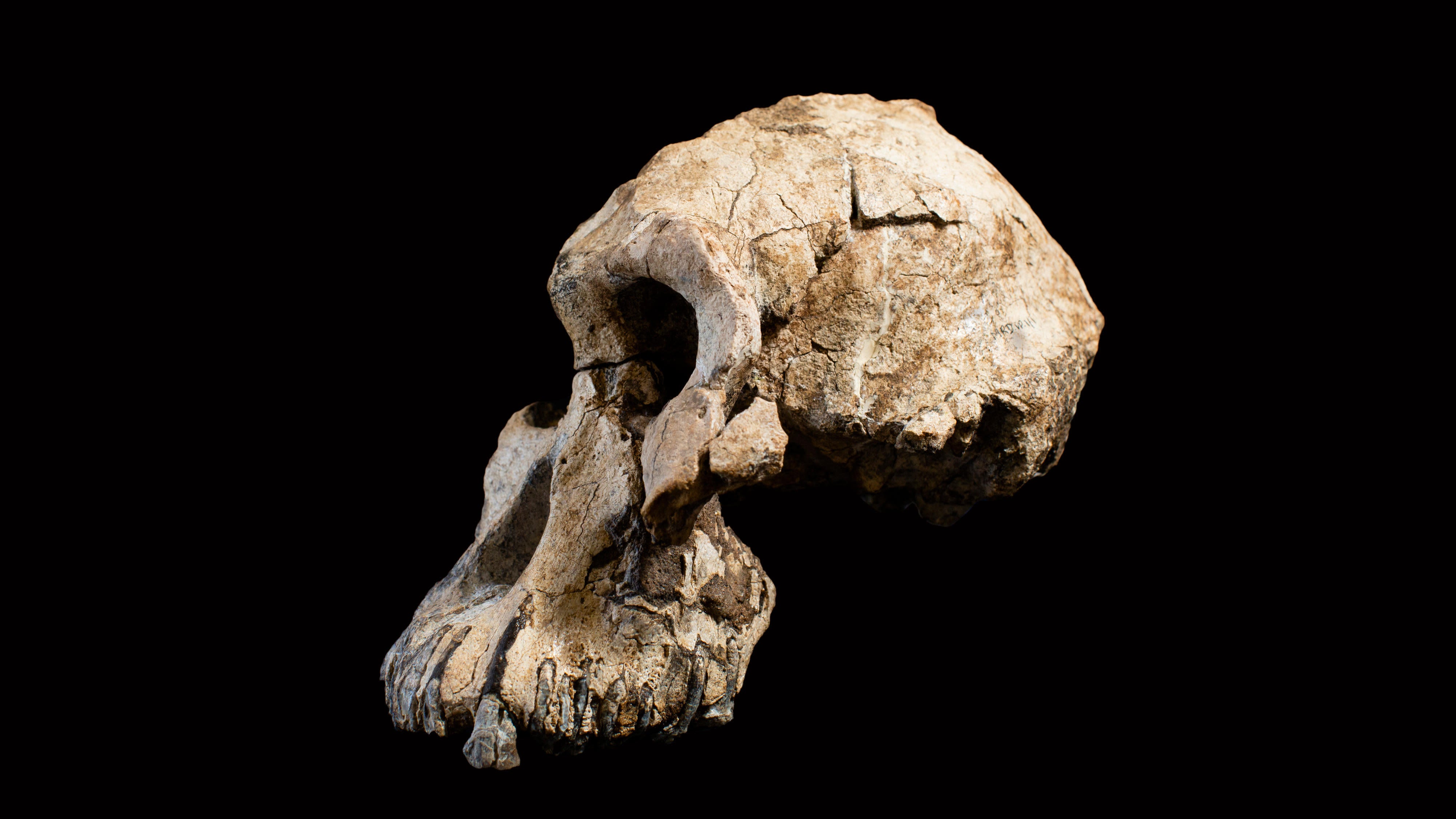 The new A. anamensis fossil. (Image: Photograph by Dale Omori, courtesy of the Cleveland Museum of Natural History)

“The new find fills [an] important gap and puts a face on this pivotal species,” Zeresenay Alemseged, a palaeontologist at the University of Chicago, told Gizmodo. “The preservation is impressive and [is thus a] major contribution to palaeoanthropology,” said Alemseged, who was not affiliated with the new research.

The cranium, in addition to revealing facial characteristics, is shedding new light on the origin of Australopithecus and the species that followed. Importantly, at an estimated age of 3.8 million years old, A. anamensis likely lived alongside A. afarensis for around 100,000 years, according to the new research. This unexpected overlap means some species within the Australopithecus genus didn’t evolve linearly, with one species tidily following another in an orderly fashion, a process known as anagenesis. Rather, this new discovery points to a different scenario, in which multiple species co-existed at the same time in a process known as cladogenesis. Evolution, as we’ve long known, is often messy and complicated.

In the first of the two Nature papers, palaeoanthropologist Yohannes Haile-Selassie from the Cleveland Museum of Natural History and his colleagues presented their analysis of the fossil. Dubbed MRD, the skull was discovered three years ago in Ethiopia around 55 kilometres (34 miles) north of Hadar, where the famous Lucy fossil was uncovered in 1974. Analysis of the fossil’s teeth and jaw allowed the researchers to assign the species as A. anamensis. The specimen was likely an adult male who reached an advanced age, as evidenced by his well-worn teeth. Analysis of the cranium revealed some surprising characteristics.

“MRD has a mix of primitive and derived [ancient] facial and cranial features that I didn’t expect to see on a single individual,” said Haile-Selassie in a press release. 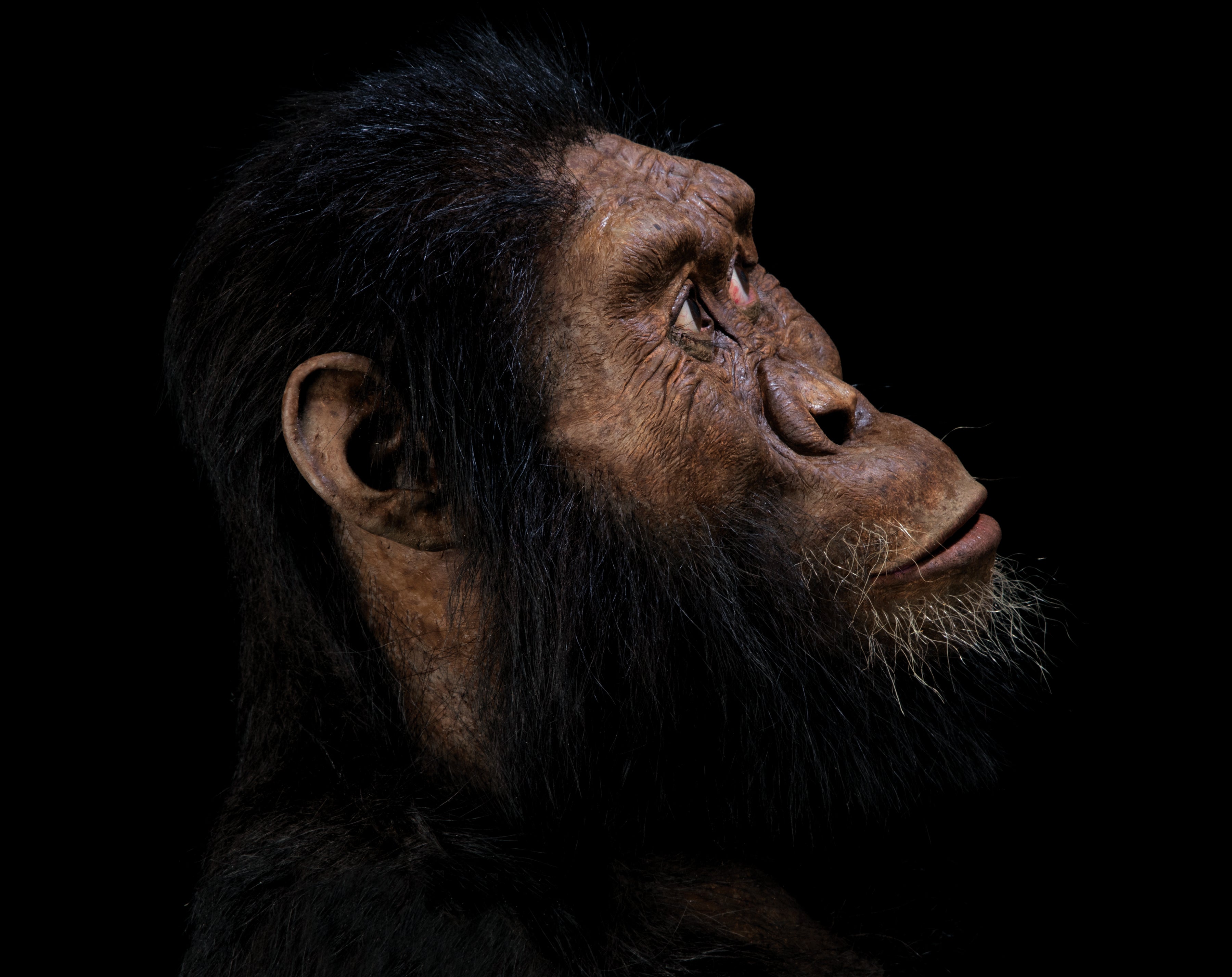 Artist’s reconstruction of A. anamensis. (Image: Photograph by Matt Crow, courtesy of the Cleveland Museum of Natural History. Facial reconstruction by John Gurche made possible through generous contribution by Susan and George Klein.)

This included a robust, long, and protruding face. Speaking at a press conference on Tuesday, study co-author Stephanie Melillo from the Max Planck Institute for Evolutionary Anthropology said these features were the “beginning of a trend” for Australopithecus, a genus that featured “massive faces” well-suited for tough, hard-to-chew diets. Consequently, this fossil could shed some new light on the origin of Australopithecus and its immediate ancestors, including Ardipithecus and Sahelanthropus. At the same time, A. anamensis also had some modern features, such as a reduction in canine size and a large cranium compared to A. afarensis—the species that supposedly came after A. anamensis.

The second Nature paper, led by Beverly Saylor, a professor of stratigraphy and sedimentology from Case Western Reserve University, dated the fossil and studied the environment in which MRD lived and died. Argon isotope dating was used to analyze minerals in the volcanic layers in and around the strata in which the fossil was found. During Tuesday’s press conference, Melillo described the dating of the fossil as “pretty secure,” with Saylor adding that it fell within a “very tight constraint.” Indeed, the age of the fossil was estimated to between 3.804 million and 3.777 million years old – a span of just 27,000 years.

Saylor and her colleagues also analysed other biological remnants found nearby, including pollen grains and the chemical traces of plants and algae. This allowed the researchers to reconstruct the ancient African landscape within which this hominin lived. The MRD fossil was found near a former lake and river delta; the lake was salty at times, and the watershed was often dry. Some forested areas existed by the shore of the delta and the river that fed the lake, but it was basically a dry region. The researchers aren’t sure what foods sustained A. anamensis at this location, saying an isotopic analysis of MRD’s teeth could provide some clues. 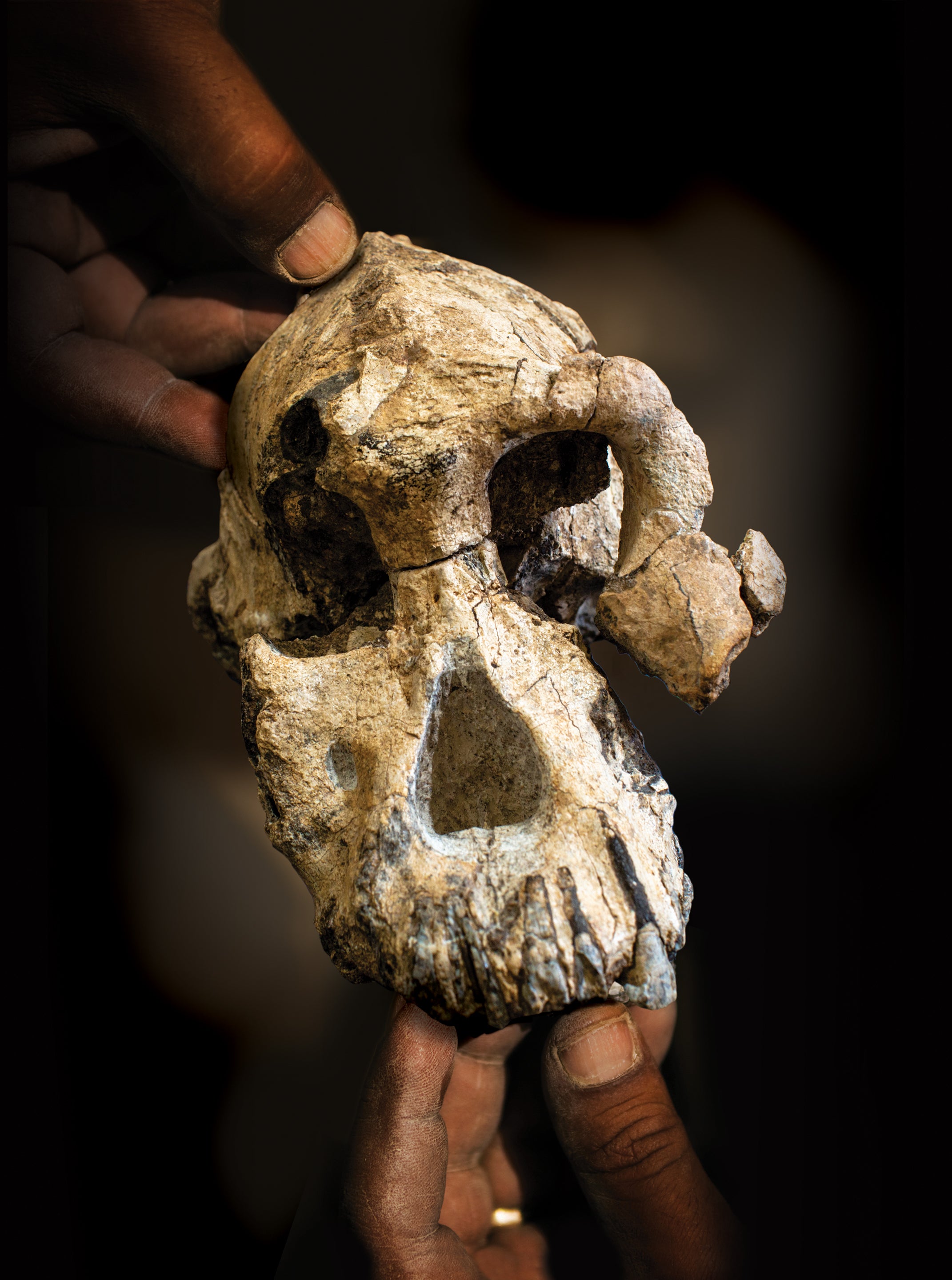 Before this discovery, fossils of A. anamensis suggested this species lived in Africa between 4.2 million and 3.9 million years ago. Scientists can now add an additional 100,000 years to this estimate – a revision with some important evolutionary implications.

According to the Haile-Selassie paper, the discovery of MRD has helped to confirm the identity of another fossil – the Belohdelie frontal fragment discovered in 1981 in Ethiopia’s Middle Awash region. Comparative analysis of these two fossils “further confirms that the 3.9 [million year old Belohdelie] frontal fragment...probably belongs to A. afarensis,” the authors wrote in the new study, adding that “the secure dating” of these two fossils indicate that “A. afarensis and A. anamensis overlapped in the Afar Triangle for at least 100,000 years.”

As noted, this overlap challenges the linear model of australopithecine evolution.

“We traditionally think about evolution as happening in a linear manner,” said Haile-Selassie at the press conference. “But could two related species live at the same time?” Haile-Selassie said closely related animals are often observed to live at the same time, and that the same thing likely happened to early hominins. The researchers don’t know if A. afarensis and A. anamensis interacted or interbred, but it remains a distinct possibility. More importantly, said Haile-Selassie, is the acknowledgement that groups of hominins split off from one another, resulting in different evolutionary experiments, and by consequence, the emergence of new species. Such a processes, known as cladogenesis, doesn’t require the absence of related species. 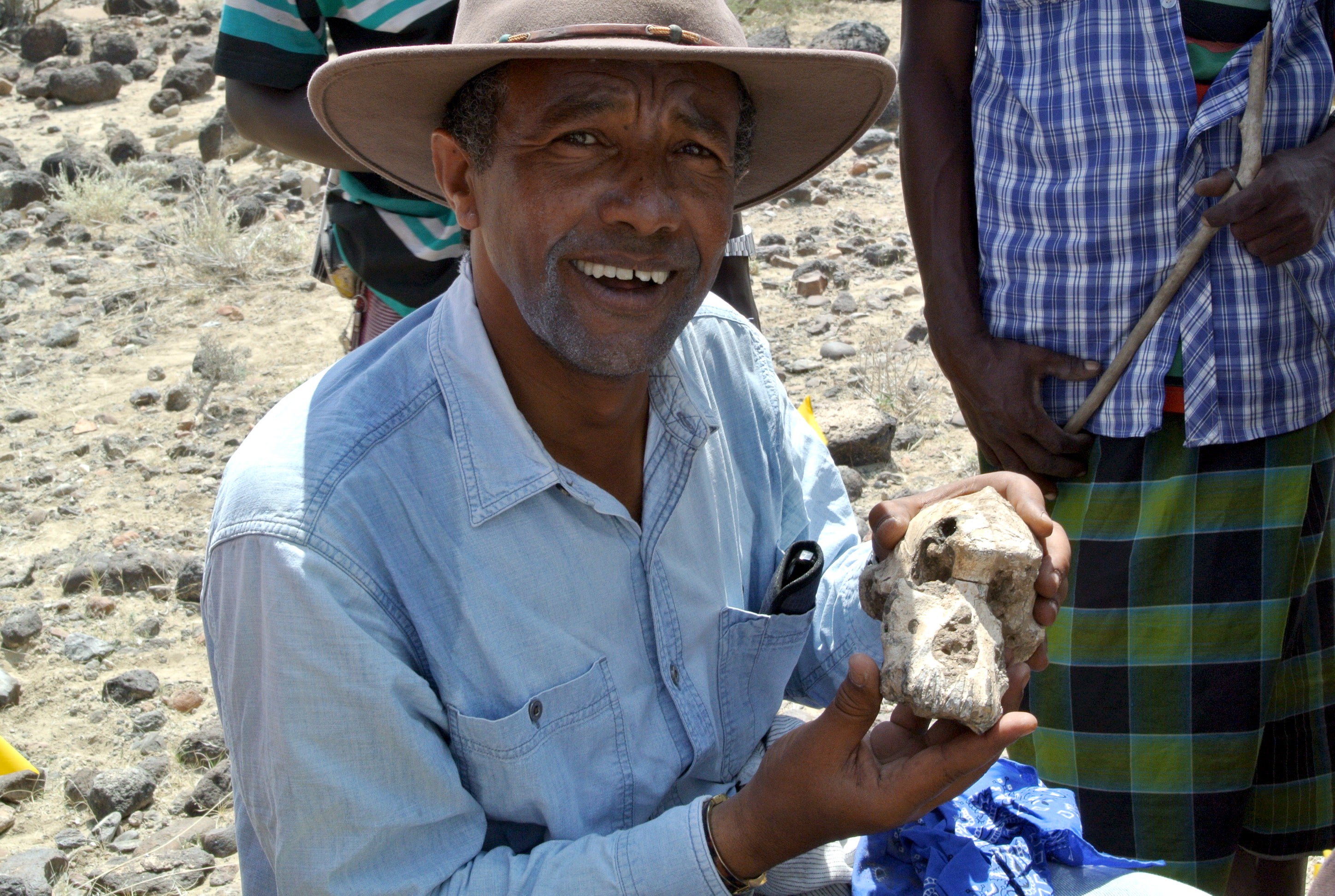 But as Alemseged explained to Gizmodo, this is just one possible interpretation.

“I find myself on the fence in regards to the claim made by the authors that the model of a single evolving lineage from A. anamensis to A. afarensis is being challenged by the new cranium,” said Alemseged. “Their argument depends on a fragmentary frontal bone discovered in the 1980s at the Middle Awash site and how it differs from the new cranium and [how it’s] more A. afarensis-like. Given the fragmentary nature of the specimen from the Middle Awash, I would restrain from sweeping conclusions on mode of evolution. This however does not minimise the great significance of the MRD cranium,” he added.

Sadly, the MRD fossil doesn’t tell us which version of Australopithecus eventually gave rise to Homo. If anything, it further complicates our understanding of early hominin evolution. As Haile-Selassie pointed out during the press conference, we can no longer say A. afarensis is the more proximate species to Homo in terms of our evolutionary lineage, as multiple possibilities are emerging.

But complications are good. It means we can discard overly simplistic interpretations and move closer to the truth.

Featured image: Photograph by Matt Crow, courtesy of the Cleveland Museum of Natural History. Facial reconstruction by John Gurche made possible through generous contribution by Susan and George Klein.