Meet the ‘Cold Dragon of the North Winds,' a Gigantic Canadian Pterosaur

An updated analysis of a 77-million-year-old fossil found in Alberta, Canada has resulted in the creation of a new genus and species of pterosaur. The newly named flying reptile, dubbed Cryodrakon boreas, featured an impressive 32-foot wingspan (but probably not the Canadian flag colours depicted above).

When this species was first discovered in 1992, palaeontologists knew very little about azhdarchids and their anatomy, owing to the poor fossil record. Azhdarchids were a group of large, long-necked, stork-billed flying reptiles that lived during the Cretaceous Period, 145 million to 66 million years ago. Working with a jumbled assortment of wing, neck, leg, and rib bones, palaeontologists tentatively assigned the specimen to the Quetzalcoatlus genus, a similarly large aerial reptile.

An updated analysis, in which new, previously unstudied fossils belonging to the same species were included, along with recent insights into azhdarchid anatomy, has shown that the specimen is not a Quetzalcoatlus, but an entirely new genus and species of azhdarchid. The new research, led by palaeontologist David Hone from Queen Mary University in London, was published this week in the Journal of Vertebrate Paleontology.

Bone from the middle of the neck of Cryodrakon. (Image: David Hone)

The authors of the new study chose the name Cryodrakon boreas, which means “cold dragon of the north winds.” A dragon indeed; this creature boasted a wingspan measuring over 10 metres (32 feet) in length, and it weighed around 250 kilograms (550 pounds). That a creature of such size and weight could fly is hard to believe, but evidence does exist to suggest these enormous beasts were capable of flight.

“It’s an ongoing challenge for palaeontologists to piece together how the ridiculously huge azhdarchid pterosaurs launched themselves into the sky and flew,” palaeontologist Armita Manafzadeh, a PhD student in the Department of Ecology and Evolutionary Biology at Brown University, told Gizmodo in an email. “As we continue to learn more about the diversity of these critters and their body plans, we’re slowly gathering the information that we need to better understand how they moved over 70 million years ago,” said said Manafzadeh, who wasn’t involved with the new research.

Physical analysis of the fossils pointed to a number of distinguishing features that set it apart from Quetzalcoatlus. In particular, Hone and his colleagues identified neck bones in Cryodrakon that were proportionally shorter and wider, an extra pneumatopore (a hole that penetrates the bone) in its neck bones, and a thinner humerus (the long bone in the upper arm) compared to Quetzalcoatlus, among other unique characteristics.

“Unfortunately, although some of the Cryodrakon bones described in this paper are beautifully preserved, we don’t have both halves of any of the animal’s major limb joints – frustratingly common for pterosaur remains – which makes biomechanical analyses difficult,” said Manafzadeh. “Still, every little bit helps us get a clearer picture of these strange creatures and their lifestyles.” 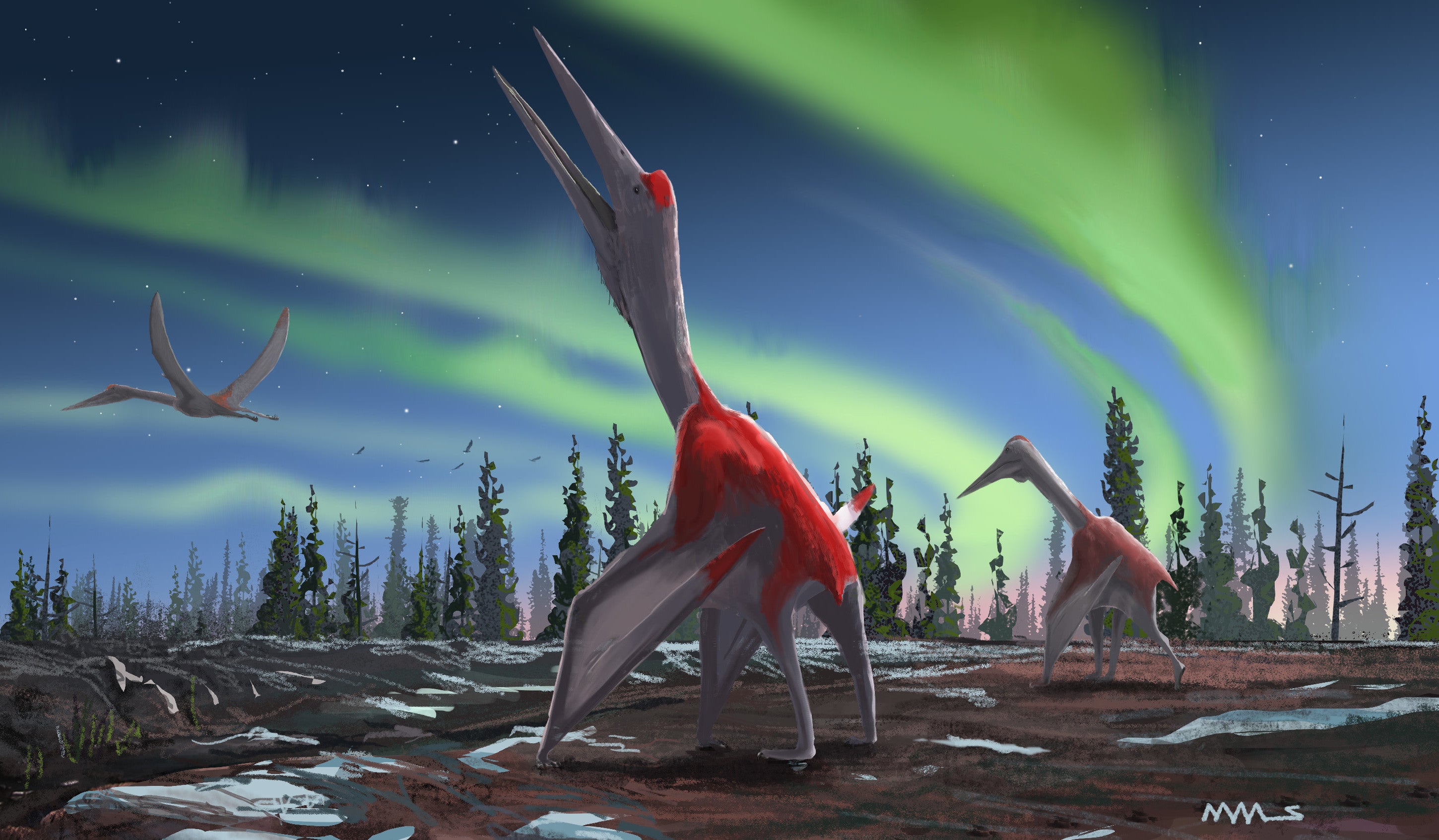 The specimen uncovered in 1992 belonged to a young Cryodrakon, and it featured a 5-metre-wide (16-foot) wingspan. The neckbones of the new fossils pointed to a much larger animal at full maturity – one comparable in size to Quetzalcoatlus, which featured a 10.5-metre-long (34.4 feet) wingspan. The new study suggest azhdarchids were more diverse than is typically appreciated.

The significance of the new paper is that the authors identified an entirely new animal, a species that shouldn’t be “lumped in” with Quetzalcoatlus, said Hone in an email to Gizmodo. It’s “a separate entity with its own biology,” he said, and the “differences in the respective proportions of the bones point to animals that were built a little differently to each other and were distinct.” Cryodrakon, for example, featured a long neck, but one more robust compared to other azhdarchids, “so maybe there’s a lot more variety here than we realise,” said Hone.

Michael Benton, a professor of vertebrate palaeontology at the University of Bristol who wasn’t involved with the new research, said the new species was similarly sized to Quetzalcoatlus, “but was perhaps more sturdily built,” he wrote to Gizmodo in an email. The fossilised remains are limited, “but the authors have made direct comparisons, and so their size estimates seem reasonable.”

In terms of habitat and lifestyle, Cryodrakon would have lived in a tropical environment, feasting on small dinosaurs, lizards, and mammals. Big tyrannosaurs and even crocodiles might have hunted Cryodrakon, but we can’t know for sure, as there’s no direct evidence for this, such as bite marks, explained Hone. That said, the bones of the 1992 specimen exhibited bite marks, and even an embedded tooth belonging to a small carnivorous dinosaur, likely a scavenger that feasted on its carcass.

We also asked Hone to comment on the artwork provided with the study’s press materials, which feature a Cryodrakon with distinctly Canadian colours on its back and wings.

“Don’t take the colours in the artwork as correct,” said Hone. “They are supposed to be fun and a tribute to Canada.” At the same time, however, the colours are also “plausible if a bit fanciful,” explained Hone, pointing to the plumage of certain pheasants and other big birds such as cassowaries. Unfortunately, we don’t know much about the colours of pterosaurs, he said, adding that more fossils could help.