Introducing Kamuysaurus japonicus – an entirely new genus and species of hadrosaur from Japan. The location of its fossilised remains suggests these majestic herbivores browsed ancient shorelines, expanding our knowledge of this wildly successful group of dinosaurs.

“This is a beautiful new dinosaur skeleton and probably one of the most important dinosaurs ever found in Japan.”

The bones of Kamuysaurus japonicus were found alongside the fossilised remains of sea turtles and mosasaurs (an extinct aquatic reptile that looked much like a modern whale), further reinforcing that this dinosaur live by the sea.

“This is a beautiful new dinosaur skeleton and probably one of the most important dinosaurs ever found in Japan,” Steve Brusatte, a University of Edinburgh palaeontologist not involved with the study, told Gizmodo in an email.

Hadrosaurs were a super successful group of dinosaurs that lived during the Late Cretaceous period (100 million to 66 million years ago), with their fossilised bones having been recovered in Eurasia, North and South America, and Antarctica. These herbivores could walk on either four or two legs, allowing them to graze along the ground or reach tall branches.

Back in 2013, the partial tail of this specimen was discovered at the Hakobuchi Formation, leading to more extensive excavations at the site. Scientists managed to uncover a nearly complete skeleton, the bones of which were carefully analysed by Hokkaido University Museum palaeontologist Yoshitsugu Kobayashi and his team. It’s the “largest dinosaur skeleton ever found in Japan,” according to a Hokkaido University press release.

Palaeontologist Liz Freedman Fowler, an assistant professor of biology from Dickinson State University, said dinosaur fossils from Japan are “rare and usually very fragmentary, so it is very exciting to have such a remarkably complete skeleton. Freedman Fowler, who’s not affiliated with the new research, described the new study as “multifaceted and very well done.”

Physical analysis of the specimen included some 350 individual bones. The creature was a mid-sized, fully grown hadrosaur that was around 9 years old when it died. The researchers speculate that its carcass floated out to sea, eventually falling onto the seafloor, allowing it to be preserved in sediment. When alive, this herbivore measured around 8 metres (26 feet) in length and weighed upward of 5.3 tonnes. 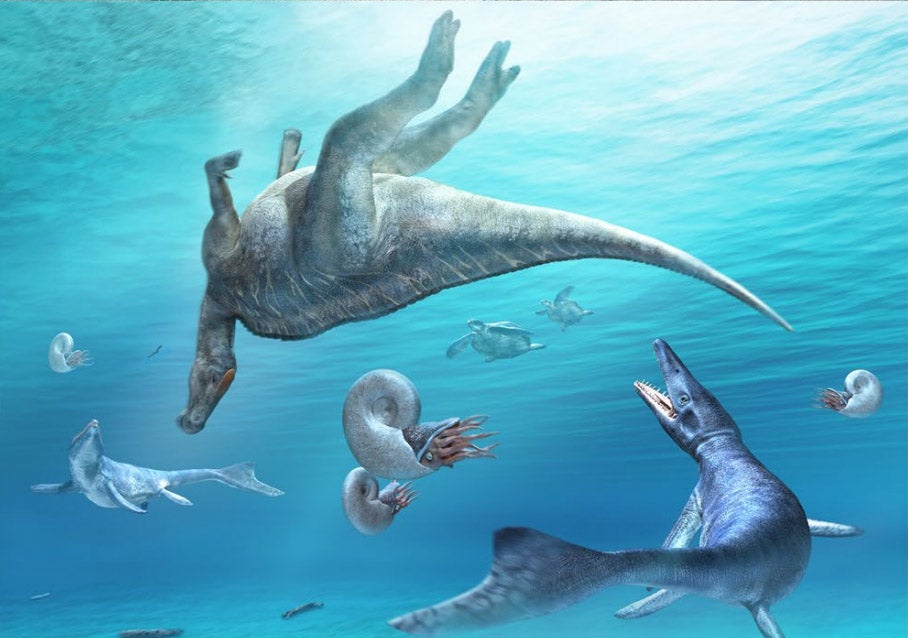 Artist’s depiction of the Kamuysaurus japonicus carcass floating in the sea prior to being deposited on the seafloor. An assortment of sea turtles, mosasaurs, and ammonoids can be seen around the dead dino. (Illustration: Y. Kobayashi et al., 2019/Scientific Reports)

In the new study, Kobayashi and his colleagues said Kamuysaurus japonicus was similar to China’s Laiyangosaurus and Russia’s Kerberosaurus, and that it belongs within the Edmontosaurini clade of dinosaurs. Accordingly, the research is providing new insights into the origin of this clade, and how these animals spread across the planet. Kamuysaurus japonicus and its close relatives likely travelled through Alaska, which connected Asia to North America during the Late Cretaceous.

“It is a member of a group that seems to have immigrated from North America and then diversified in Asia during the very end of the age of dinosaurs,” explained Brusatte. “It is another reminder that dinosaurs were actively moving around and diversifying right up until the end of their reign.”

This species of hadrosaur featured three unique physical characteristics that distinguish it from other members of the Edmontosaurini clade, thus warranting the creation of an entirely new genus and species of dinosaur. These features included a small crest on its skull, a short row of forward-leaning spines on its back, and a shorter-than-usual bone plate in its jaw bone.

Because hadrosaur crests “grow and change shape as the animal grows up,” they can be used to determine whether the specimen was an adult, said Freedman Fowler.

“This skeleton was close to full-size for this species, and the skull bones show that there was a good-sized bony crest on the skull, which was unexpected for a relative of Edmontosaurus, which only had a soft-tissue crest on its otherwise dull skull,” explained Fowler in an email to Gizmodo. “The nasal crest bone itself is missing, so the next mystery will be discovering exactly what shape that crest would have been.”

As a final note, we asked Freedman Fowler if it’s still correct to refer to hadrosaurs as “duck-billed dinosaurs.”

“Good question,” she said. “We know it’s a poor term and not accurate, but we don’t have anything better, so yes for the general public—we still say ‘duck-billed dinosaurs.’”