The Best Apps for Spending Less Time on Your Phone

Are you, maybe, perhaps, spending too much time staring at your phone? Those minutes spent scrolling through social media feeds and beating your latest high scores can really add up, and before you know it, you’re losing hours a week you could be spending more productively. These apps will help you strike a balance. 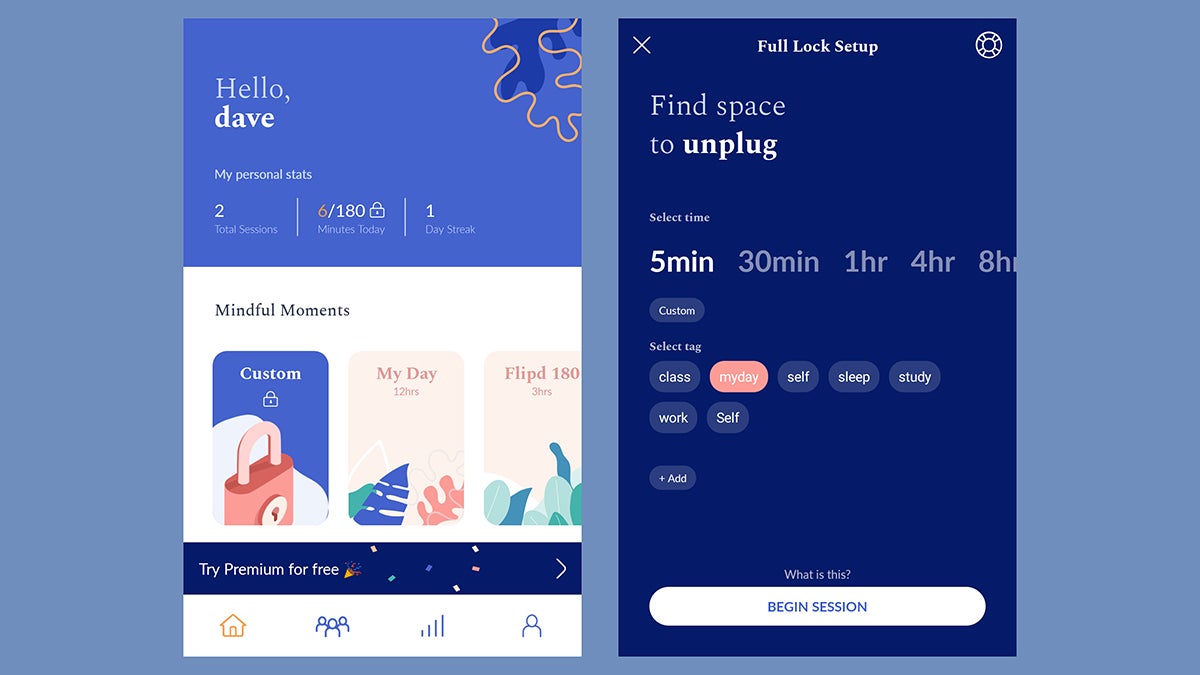 Flipd for Android and iOS is both a distraction blocker and a wellness enhancer, with a variety of different components: You can lock away apps you don’t want to use for a while, track your productivity and focus, and connect with friends and family to see who’s the best at avoiding distractions. You can use the app for free initially, with in-app purchases enabling premium features (like the ability to block out apps for more than 30 minutes).

You can categorise your phone breaks – setting them up as for work, or for study, or for mindfulness, for example. Over time, you’ll see some neat statistics that’ll show you how many minutes you’ve saved, and how many days you’ve been able to keep up your good habits for. If you want, you can have Flipd give you nudges throughout the day (just like your fitness tracker). 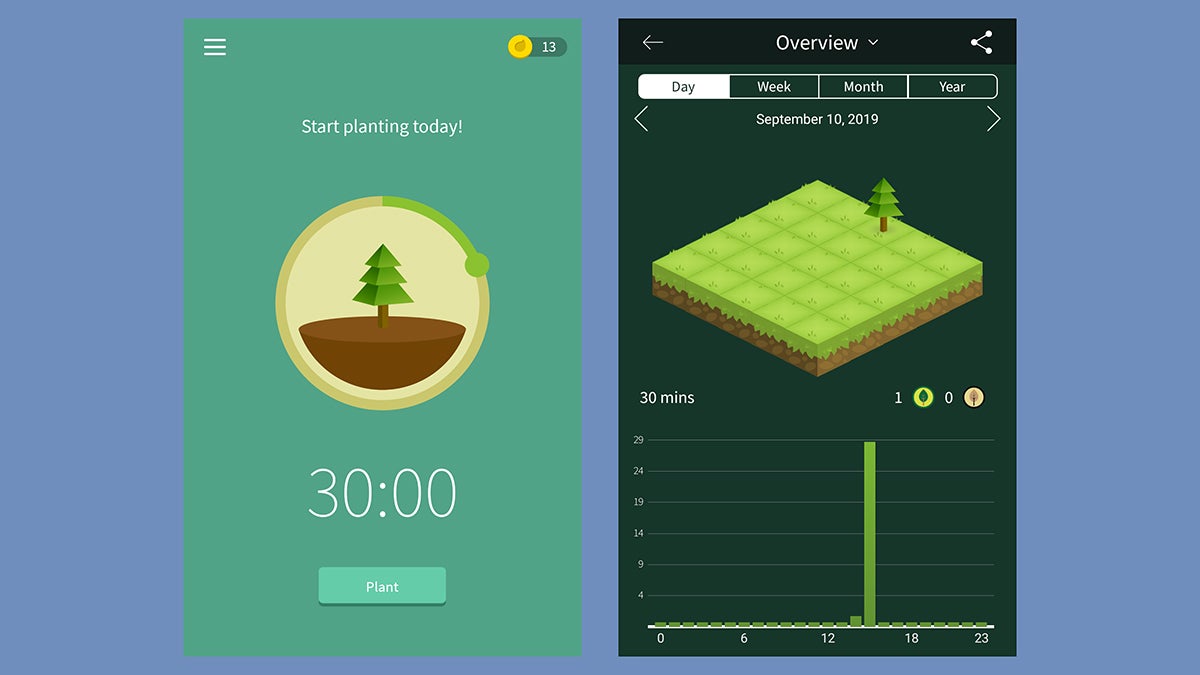 If you need some extra motivation to go with your willpower when it comes to leaving your phone alone for a short time, would growing a digital forest of trees help? That’s what you get with Forest for Android and iOS: When you put your phone down, a tree begins to grow, and if you can resist the temptation to pick up your device again before you’re supposed to, you’ll soon end up with a flourishing forest that honours your dedication to the cause.

You set the length of time that you want to stay focused and away from your phone, and Forest takes care of the rest. If you manage to hit your target, then an extra tree appears in your forest, and you can track your progress over time (how well you’re doing each day, week, and so on). The app is £2 on iOS and ad-supported on Android, with in-app purchases for cross-device syncing, achievements, app whitelisting, and more. 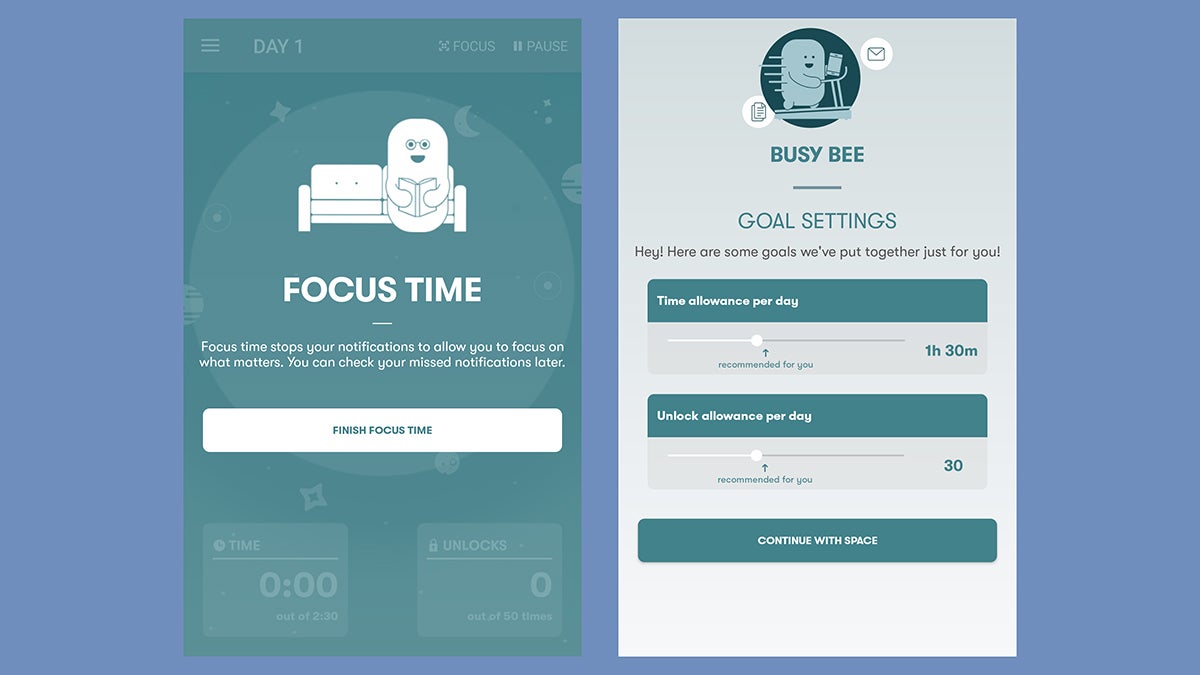 Space for Android and iOS goes beyond the basics of shutting out apps to bring you a more personalised experience. It can give you tips on changing your smartphone habits (based on actual research), and will attempt to work out why you spend too long on your phone: Is it boredom? Is it being too busy? Or is it something else? Alongside these features are the usual tools for locking your phone for set periods and tracking your overall progress.

Part of the app enables a Focus Time mode, which actually blocks out notifications from other apps. You can end it whenever you like, but it’s good for short bursts of productivity. More broadly, you can set goals in terms of how much time you spend on your phone each day, and how frequently you unlock it, and then get Space to help you hit those targets. More features can be unlocked with a premium subscription. 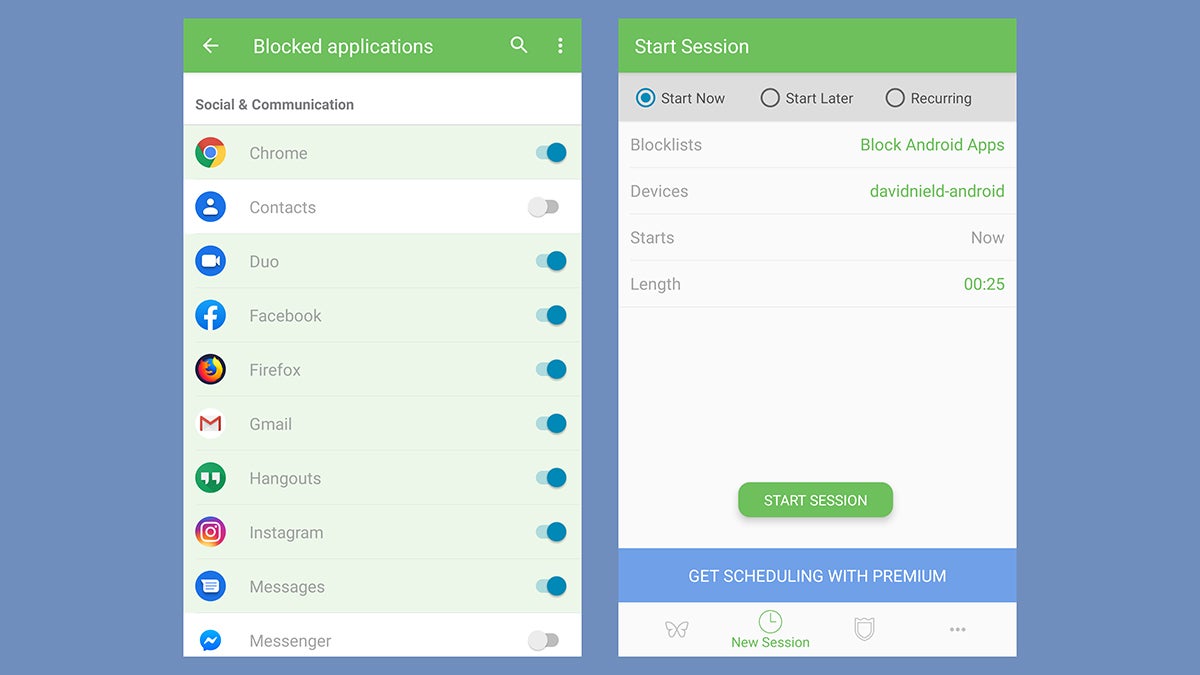 For a more comprehensive distraction-blocking service that works across your devices, consider Freedom. The downside is that it will set you back £6.49 a month or £27 a year after the free trial has expired. You might consider that a worthy investment considering just how many devices it supports, and the detailed control it gives you over your distraction-free schedules.

As far as the apps for Android and iOS are concerned, Freedom lets you put restrictions on particular apps and even particular websites that you don’t want to spend much time (or any time) on. You have the option of setting certain scheduled times when you need a productivity boost, or starting sessions whenever you need to manually. If you don’t want to pick and choose individual apps, use one of the preset lists available in Freedom. 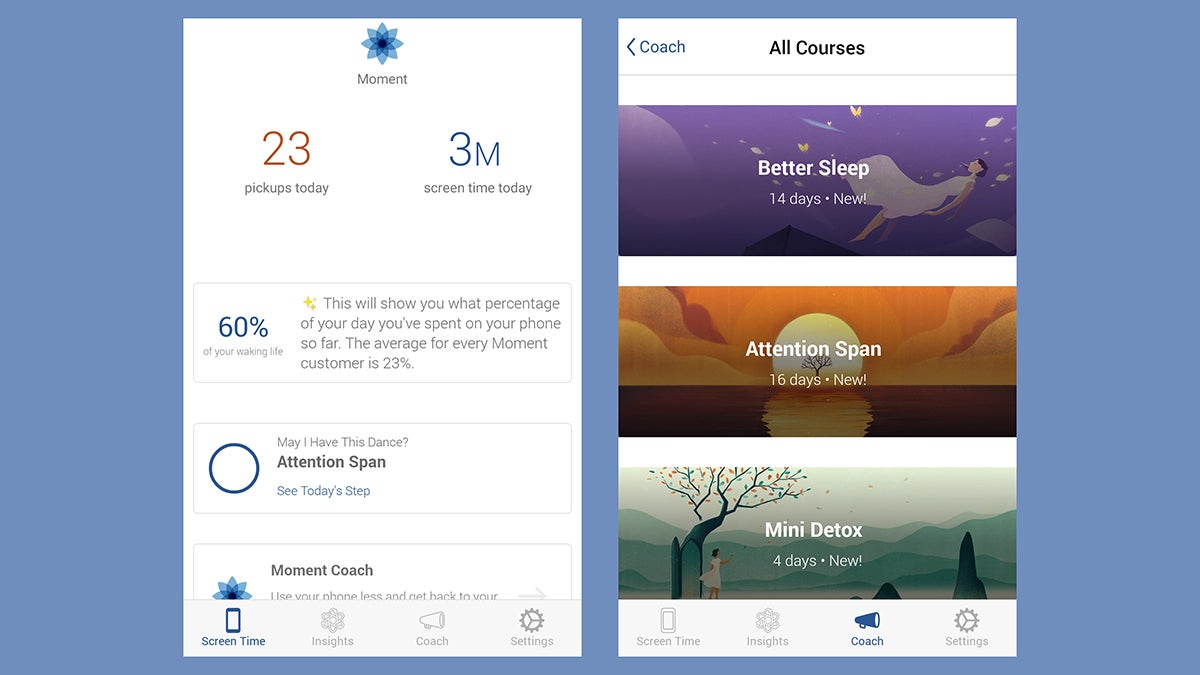 We like the clean look and simple approach of Moment for Android and iOS, which aims to encourage you towards its “less phone, more life” mantra. It’s not quite as overbearing as some other digital detox apps, and instead gently nudges you towards better habits. The process starts by making you aware of just how much time you’re spending on your smartphone and the mobile apps that are sucking up most of your attention.

The app includes some useful guided courses too, though some cost extra as in-app purchases. In the case of the Attention Span course, for instance, the app encourages you to listen to one song all the way through, to create a distraction-free space in your home, to spend an hour reading a book, and so on. If you’re looking for a mix between a distraction blocker and a life coach, the Moment app may well have what you need. 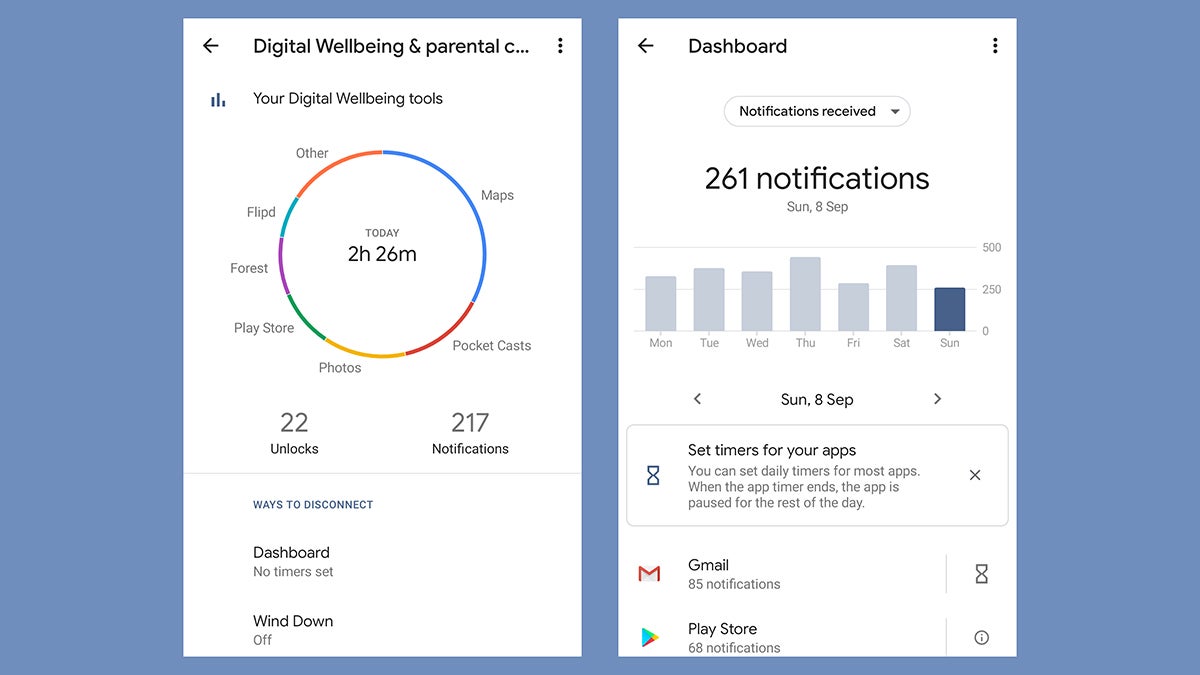 We should also mention the native options now built into Android and iOS. On Android, we have Digital Wellbeing, available here if it doesn’t come with your phone: the portal covers everything from restricting how many minutes you can open up Snapchat and Instagram per day, to breaking down just how many notifications you’re getting from each of your apps. It’s both a sobering summary of your smartphone use and a tool to help you tackle it.

You’re able to set daily time limits for individual apps, if you want to, and there’s also a recently introduced focus mode that just blocks notifications from selected apps when you’ve got something more important to do. The feature called Wind Down, meanwhile, is designed to get you ready for bed. At a set time, it turns your phone’s display grey, turns on the night light feature, and puts your handset in Do Not Disturb mode all at once. 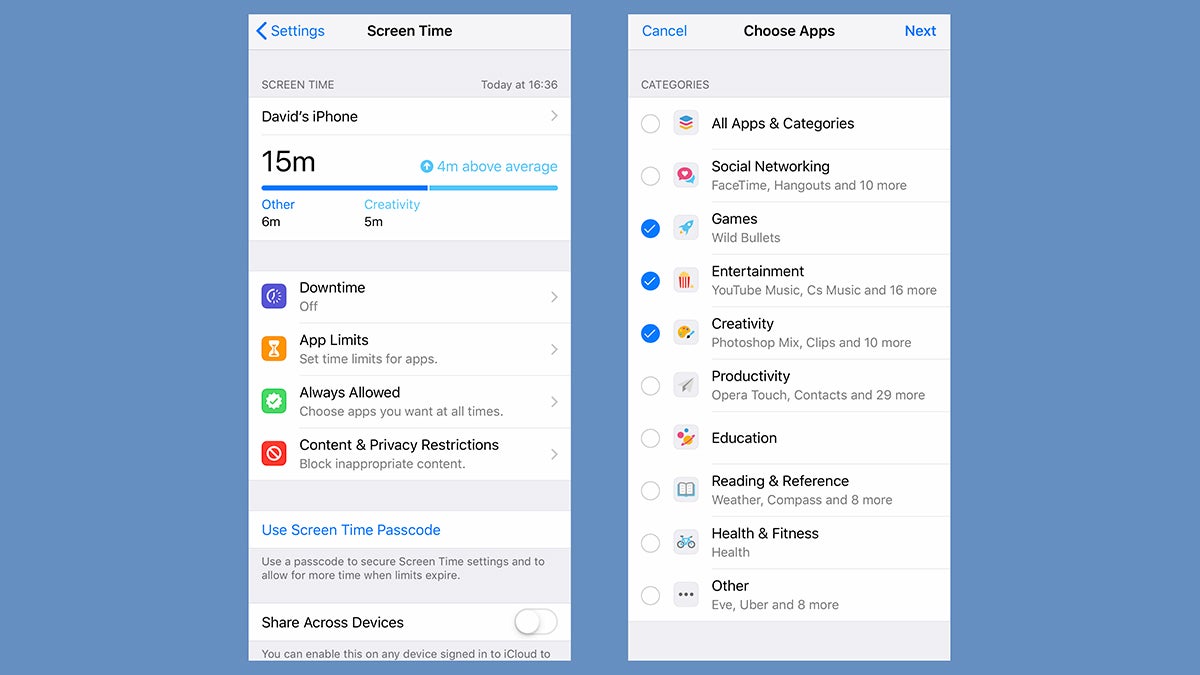 Apple added Screen Time to iOS as well, which matches up with Digital Wellbeing pretty much feature for feature. Open up the tool from the Settings app, and you can start with an analysis of your smartphone habits: How much time you’re spending on your iPhone, how many times you’re picking it up in a day, and which apps are piping through the most notifications. It’s all broken down over the last day or the previous week for you.

You can then go further and impose time limits on the apps you want to cut back on, either by picking individual apps or by using groups of apps (like entertainment, games, social networking, and so on). As with Android, there’s a tool for getting you ready for bed, too: It’s called Downtime, and it acts as a customised version of Do Not Disturb. You can use it to disable specific apps that you know you shouldn’t be using late at night.