The Apple Watch is hands-down the best smartwatch out there. There, I said it. It’s a boring conclusion that is nevertheless the cold, hard truth. You can prefer a round face, or a different operating system. You can scream about better battery life and third-party watch faces until you die, purple-faced from asphyxiation. The Series 5 still reigns king. That’s true even if this time around, most of the updates are small tweaks rather than game-changers.

What is it?: Apple's latest smartwatch with an always-on display

Price: £400 for GPS-only; £500 for cellular. Bags of money for premium materials like titanium and ceramic.

Dislike: You still need to charge every night

Now that’s out of the way, if you have an Apple Watch already, there’s not a huge reason to upgrade unless yours is on the verge of dying. (Or if you feel like burning your money in a bonfire.) I say this because you can get most of what makes the Series 5 great by downloading WatchOS 6. That includes new features like women’s health tracking, noise monitoring, the tip calculator, the new on-wrist App Store, compass, and some updates to Siri – who despite everything, is still the worst of the three major voice assistants.

The most compelling reason to shell out £400 or more for a Series 5 would be if you want an always-on display. It’s not a new feature in the smartwatch world, nor is it unique to Apple. Plenty of Android watches introduced always-on display modes ages ago, and Fitbit just did it with the Versa 2. That said, the Series 5's always-on display does it better.

Part of that is the low-temperature polycrystalline oxide (LTPO) screen. In simple terms, the screen can refresh at a rate that varies from 1Hz to 60Hz. To ensure that the always-on display doesn’t eat into battery life, Apple’s also tweaked its sensors to be more power-efficient, and watch faces have a “dimmer” mode when you’re not looking directly at the watch. For example, the new Meridian face switches from white to black when you’re not looking at it and eliminates the animation for the second hand. I should note, however, the always-on display watch faces aren’t a monochrome bore like it is with the Versa 2. You still get to view complications, and there’s still a flash of colour depending on the watch face.

The other part is Apple’s keenly aware that everybody’s a busybody. True story, seeing an errant message pop up on an Apple Watch was how a friend of mine caught a cheating significant other. While you can still get notifications and view complications, Apple also includes a “Hide Sensitive Complications” option in the watch’s settings. When your wrist is down, it’ll hide notifications you don’t want other people possibly seeing out the corner of their eye – things like emails, messages, heart rate and calendar events. It’s a small touch for sure, but one that might matter depending on your job or situation. 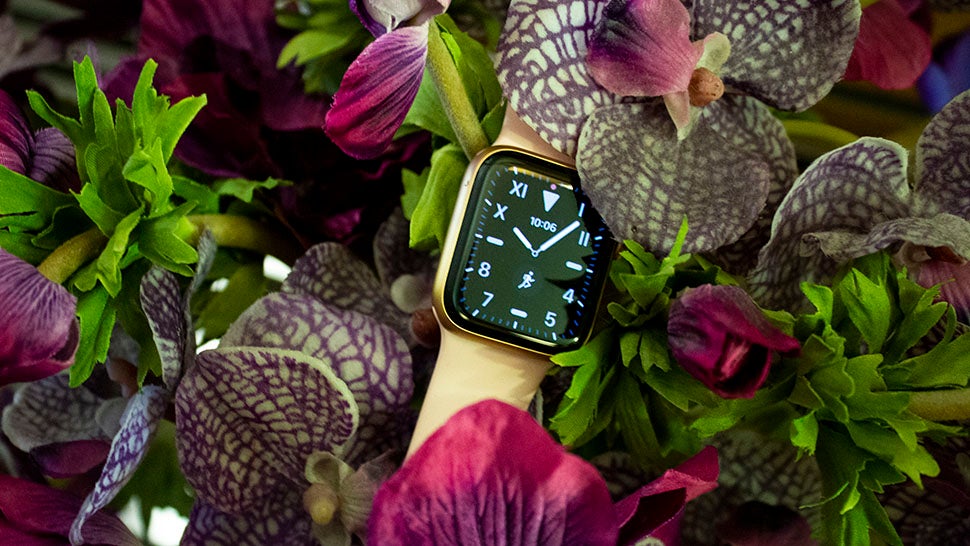 Each watch face has an “alternate” version for the always-on display. This is the low-power version of the California watch face. (Photo: Victoria Song/Gizmodo)

If you’re worried the always-on display could muck up a night at the movies or your sleep, don’t. Apple told me another change with the Series 5 is the ambient light sensor. It too is always on now. Meaning, if you’re lying in bed trying to sleep, it can tell the lights are off and will dim accordingly. I tried it. It works, and there’s always theatre mode if you want to play it safe.

Personally, I found the always-on display to be neat but not necessary in my day-to-day. I chalk it up to years of reviewing smartwatches – the wrist flick is just second nature now. That said, I can see how this might be good for new smartwatch owners accustomed to their non-smart watches. The thing I found it most useful for was running. Not because it was great in direct sunlight – it’s not – or for glancing at my stats from my peripheral vision. (I don’t know how you run, but it’s awkward trying to look at your watch without raising your wrist.) It’s useful because the display is already on, meaning there’s no lag when you flick your wrist to wake the watch up. The stats just get brighter and easier to see. It always takes me out of the zone when I have to whip my arm up multiple times to check my pace, so this was a welcome change. 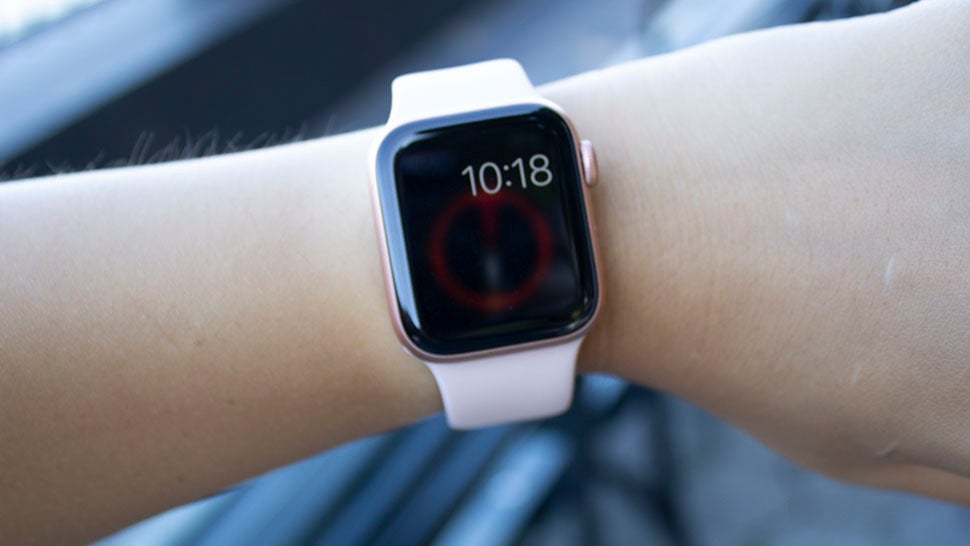 This is what the always-on display looks like when you’re using an app. Privacy, man. (Photo: Victoria Song/Gizmodo)

As for battery life, you still have to charge every day, but you don’t have to pack a charger in your bag. The always-on display does guzzle more battery compared to previous models, but not in a noticeable way. On a day where I picked the watch up off the charger at 8 am, spent hours walking around the city, and got home around midnight, the Apple Watch still had about 30 per cent battery left. Of course, how much you get off one charge will depend on how heavily you use LTE, Bluetooth, and GPS. For reference, a 30-minute GPS run with the always-on display zapped about 20 per cent of my battery, but by bedtime, I still had 36 per cent left. I didn’t get anywhere near the 36-ish hours I got with the Series 4, but as long as you’re okay charging every night you’ll be fine. 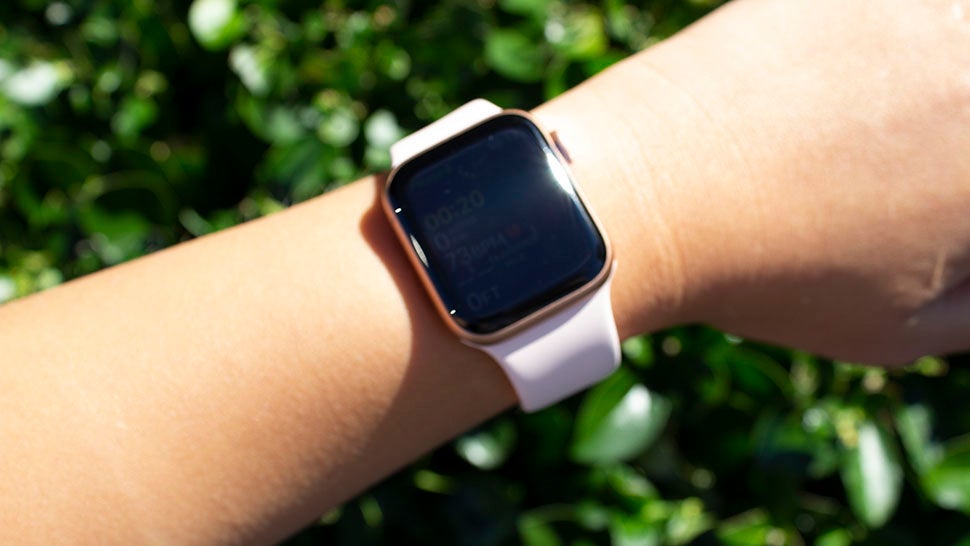 The always-on display doesn’t do well in direct sunlight. But because it’s always on, there’s no lag in waking up the watch while you’re mid-exercise. (Photo: Victoria Song/Gizmodo)

The other hardware upgrade allows the Apple Watch to make emergency calls in other countries. Data will still depend on what deals Apple has with international carriers, but the idea is if you have a bad fall, the watch can call emergency services for you. You will most likely never need this feature, but hey, it’s there.

That’s really it. Accuracy-wise, the Series 5 delivered the same results as the Series 4 during a 2.44-mile GPS run. That’s to say it slightly underreported distance (2.39 miles) compared to my phone’s GPS, while heart rate was well within 5 beats per minute of a Polar H10 chest strap. So again, unless you absolutely must have that LTPO screen or fancier titanium or ceramic materials, upgrading isn’t worth it. I downloaded WatchOS 6 to my Series 4, and it’s fine. You might experience some minor lag with an older model – like the Series 2 – but a millisecond or two of latency isn’t going to kill you. You also might notice worse battery life with certain apps from WatchOS 6, but before you run to the Apple Store, do yourself a favour and download the update and sit with it for a week. If the performance really is unbearable, the Series 5 isn’t going anywhere anytime soon. 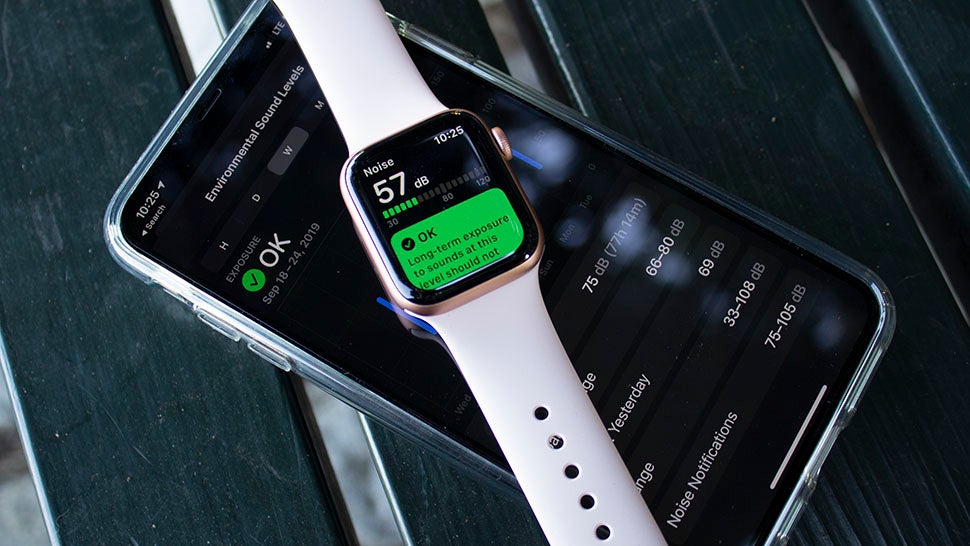 Noise monitoring is not exclusive to the Series 5; you can get it by downloading WatchOS 6. (Photo: Victoria Song/Gizmodo)

As for WatchOS 6 and iOS 13's health updates, they’re solid but more passively iterative than mind-blowing. The on-wrist App Store is long overdue, but like all wrist-based stores, limiting. Browsing for apps is hard on a small screen, even with a dedicated Featured apps section – but that’s not a problem unique to Apple. Downloads are easy, but some will require your phone nearby. The Compass app will probably appeal to hikers or the perpetually lost, but it’s not the most exciting feature to write home about.

Noise monitoring works, but its utility is more long-term. For instance, most people will know when they’re in a loud environment so a notification telling you “Hey, you’re in a loud place right now” is kind of pointless. While testing, I walked past a blaring ambulance that registered 105 decibels on my watch. I knew it was loud and bad for my ears, so the accompanying notification was redundant. More interesting is going into the Health app to look at your noise exposure level over the course of a week or month. A week in New York City, for example, netted me an average noise exposure level of about 75 decibels for a duration of 76 hours and 48 minutes. This is probably more useful for people whose jobs may result in hearing loss, like musicians. For me, it’s something I can tuck in my small talk arsenal for the next time someone asks me what I do for a living.

Cycles Tracking, however, is a welcome change. I’ve only spent about a week or so with it, but I’m tempted to use it as my main period tracking app. It’s got a clean design and logging from my wrist is easier than on other smartwatches. It’s also a nice touch that you can opt in or out of fertility or sexual activity logging, as well as choose how prominently that information is displayed in the Health app itself. Both are sensitive bits of information that despite Apple’s privacy promises, are things women might want to keep to themselves or at least away from nosy passengers on the train. Apple also gets points for including text discouraging users from relying on its fertility window predictions for contraception – a low bar, but one that some women’s health apps fail to clear. My one quibble is like so many period apps out there, there’s no option to log certain contraceptive options, such as the NuvaRing or birth control pills. 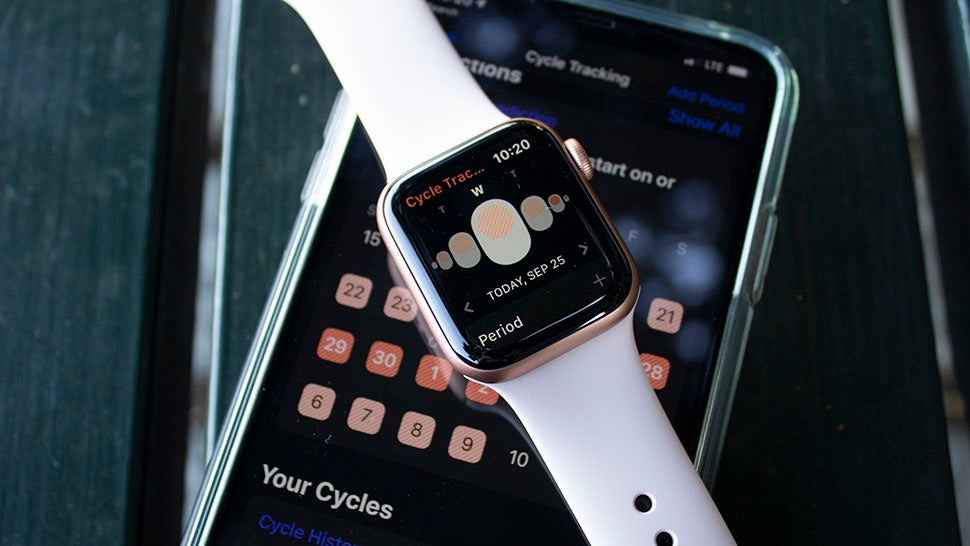 Cycles Tracking is one of the easiest apps for logging from your wrist. (Photo: Victoria Song/Gizmodo)

Likewise, the new Health app is a marked improvement. Navigating between menus takes some getting used to, but the new Highlights section is useful context. It is weirdly motivating to see that say, by 10:30am, I am 3,000 steps behind my daily average. Or that I’m averaging fewer exercise minutes this month than last month (23 minutes a day in September, versus 25 minutes a day in August). It’s definitely not as advanced as the companion apps for a Polar or Garmin smartwatch, but it’s better at tracking your trends over time than Fitbit.

Small improvements are still improvements. The Series 5 might not represent a major shift in the same way the Series 4 did, with its bigger screen and ECG capabilities, but it is the more comprehensive watch. And given the lack of serious competition, it’s not like Apple needs to rush with how many features it adds each year. It’s free to coast on incremental improvements for the foreseeable future because right now, every other smartwatch maker is still playing catch up in quality and breadth of features. Except for battery life. But if all I can harp on is battery life – a thing most Apple Watch users seem to be ambivalent about anyway – then what is there really to complain about?