How do you solve a problem like an invasion of feral cats?

No, it’s not a scenario from a sci-fi dystopia but a real conundrum for scientists, authorities, and conservationists in Australia. No one is exactly sure at what point the felines arrived down under with European settlers, but they sure have made themselves at home.

“I think people get confused...they think they’re stray cats or pet cats that have been dumped. But really, we’re talking about a wildlife species, they live without human contact...they are not reliant on humans.”

There could now be anywhere between two to six million wild or feral cats in the country depending on seasonal conditions. If that seems a lot, then their kill list is mind-boggling. The Australian Wildlife Conservancy estimates they wipe out about 316 million birds and 596 million reptiles each year.

Along with another introduced species, the fox, they are also suspected of being the key factor in the extinction of perhaps more than 30 species of mammals native to the continent. From lush tropical forests to Australia’s vast, largely uninhabited arid desert interior, the cats are able to survive – and indeed thrive – in every terrain and climate.

“They are found in every habitat type throughout the whole of Australia,” ecologist Katherine Moseby said. “You can’t really go anywhere without finding a feral cat there. I think people get confused a bit sometimes when you speak of feral cats, they think they’re stray cats or pet cats that have been dumped. But really, we’re talking about a wildlife species, they live without human contact, they don’t need to drink, they are not reliant on humans.”

Small marsupial and rodent species are bearing the brunt of the feral cat army’s appetite for hunting and killing. These include the greater bilbie – a funky looking bandicoot that superficially resembles a rabbit – and the burrowing bettong, a hopping bipedal marsupial also known as a rat kangaroo.

“We have had single cats wipe out an entire reintroduction programme. Just from one cat.”

Both species were once common across southern Australia and so-called arid Australia (areas that have an average yearly rainfall of less than 250 millimetres or about 10 inches). The bilbie’s cousin, the lesser bilbie, was believed to have gone extinct in the 1950s, and the greater has seen its range decrease by 70 per cent since European settlement to pockets mainly in the north west.

The bettong has fared even worse. It had the largest distribution of any mammal in Australia prior to the arrival of cats, but became extinct in the wild on the mainland by the 1950s as well and now only remains on small islands that have been cleared of predators. 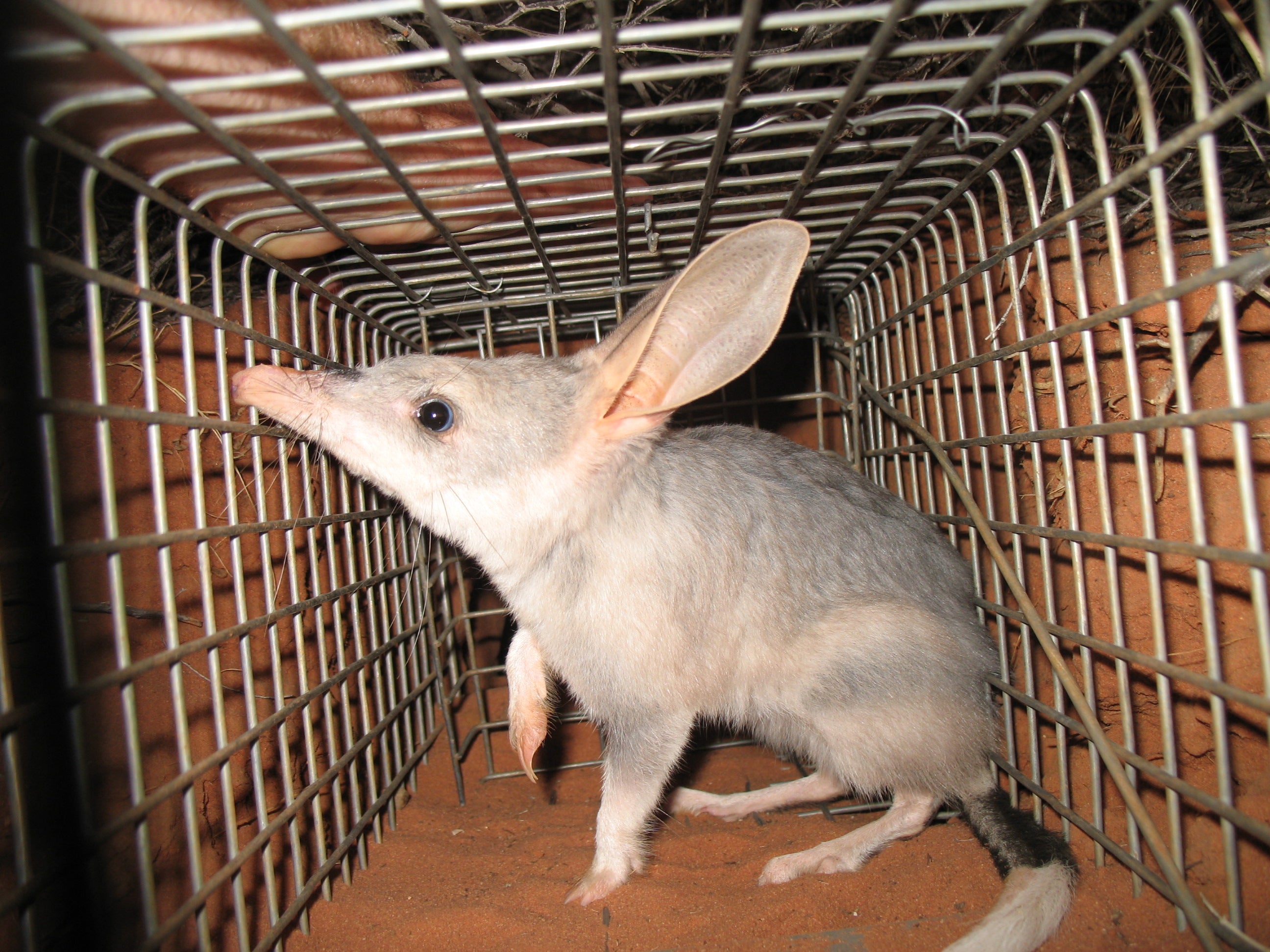 A greater bilbie, a type of bandicoot native to Australia. Its cousin the lesser bilbie became extinct by the 1950s. (Photo: Katherine Moseby/Arid Recovery)

Given the absence of a natural stalking predator prior to the arrival of cats, many of the smaller species between 35 grams and five kilograms (1 ounce up to 5 pounds) that live predominately in burrows simply could not handle the feline strategy of surprising prey.

Conservationists say the surviving animals aren’t only worth protecting because they’re endemic and cute. Their prodigious digging skills mean they play a valuable role as ecosystem engineers dispersing seeds and maintaining vegetation, crucial in a drought-prone country reliant on agriculture.

Moseby, from the University of New South Wales in Sydney, is a big fan of bilbies and bettongs, spending more than 25 years working to protect the two animals and others. She and her husband and fellow ecologist Dr John Read of the University of Adelaide set up Arid Recovery in 1997, a 132 square kilometre (51 square mile) wildlife reserve and living research centre in the remote outback of northern South Australia, a good six hour drive from Adelaide.

They live nearby with their children. The centre employs a number of specialist researchers and is home to a number of native and reintroduced species - including bettongs and bilbies, both of which have long been absent from the area in the wild. 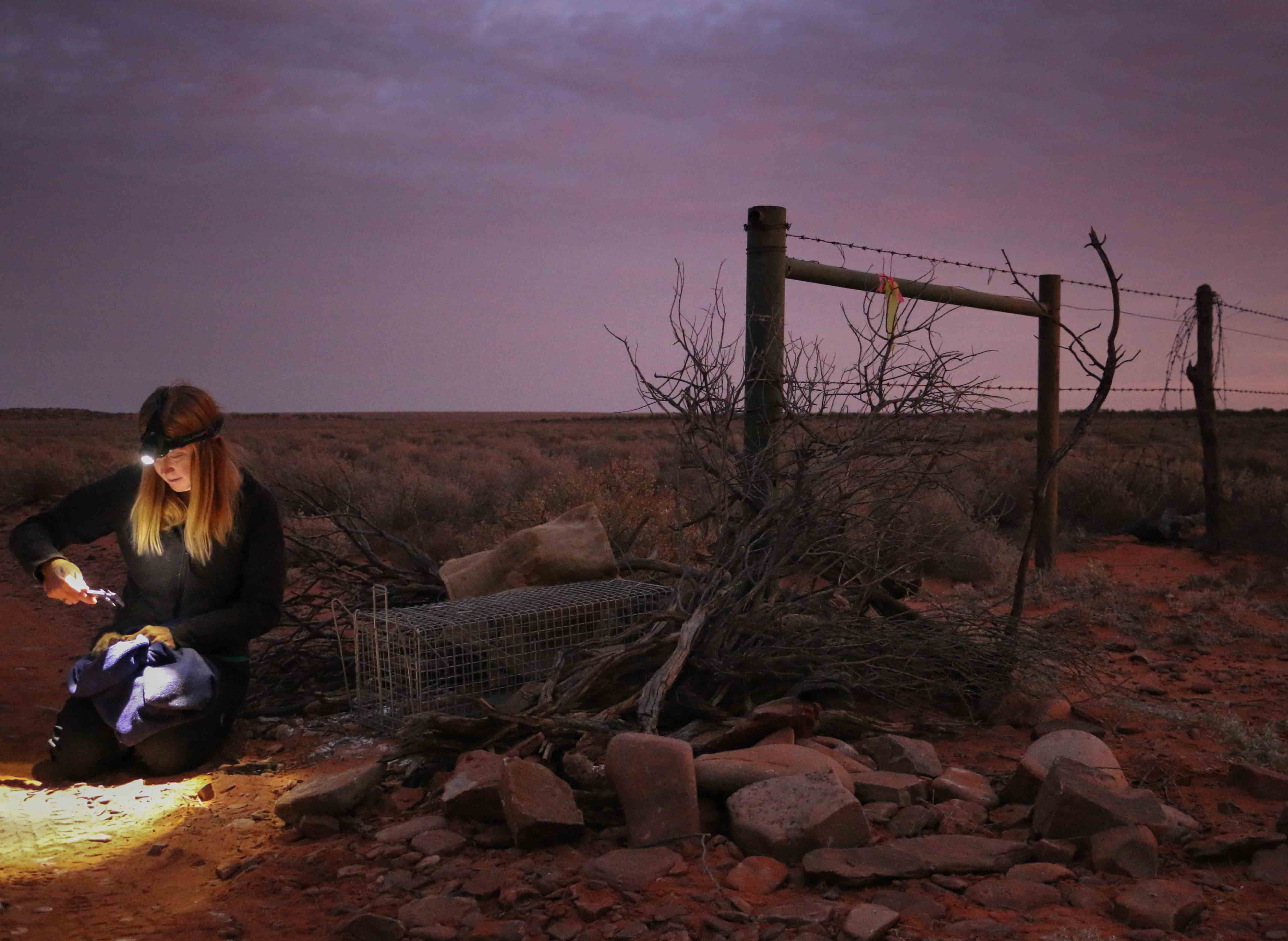 Moseby and her colleagues have been measuring the bettongs and bilbies over the years to see if they are changing in size due to pressure from cats. (Photo: Katherine Moseby/Arid Recovery)

Conservation efforts at a national level around native mammal species have tended to follow a dual strategy of cat eradication and fencing off protected areas. Just last year, the world’s longest cat proof fence was erected in the barren Northern Territory providing a 94 square kilometre (36 square mile) sanctuary for other endangered species such as the Rufous hare-wallaby or mala.

The team of scientists at Arid Recovery and other Australian conservationists have attempted to reintroduce numerous native species, including bettongs into the wild on the Australian mainland over the years. They have met with little success due to the ubiquity of their feral nightmare. 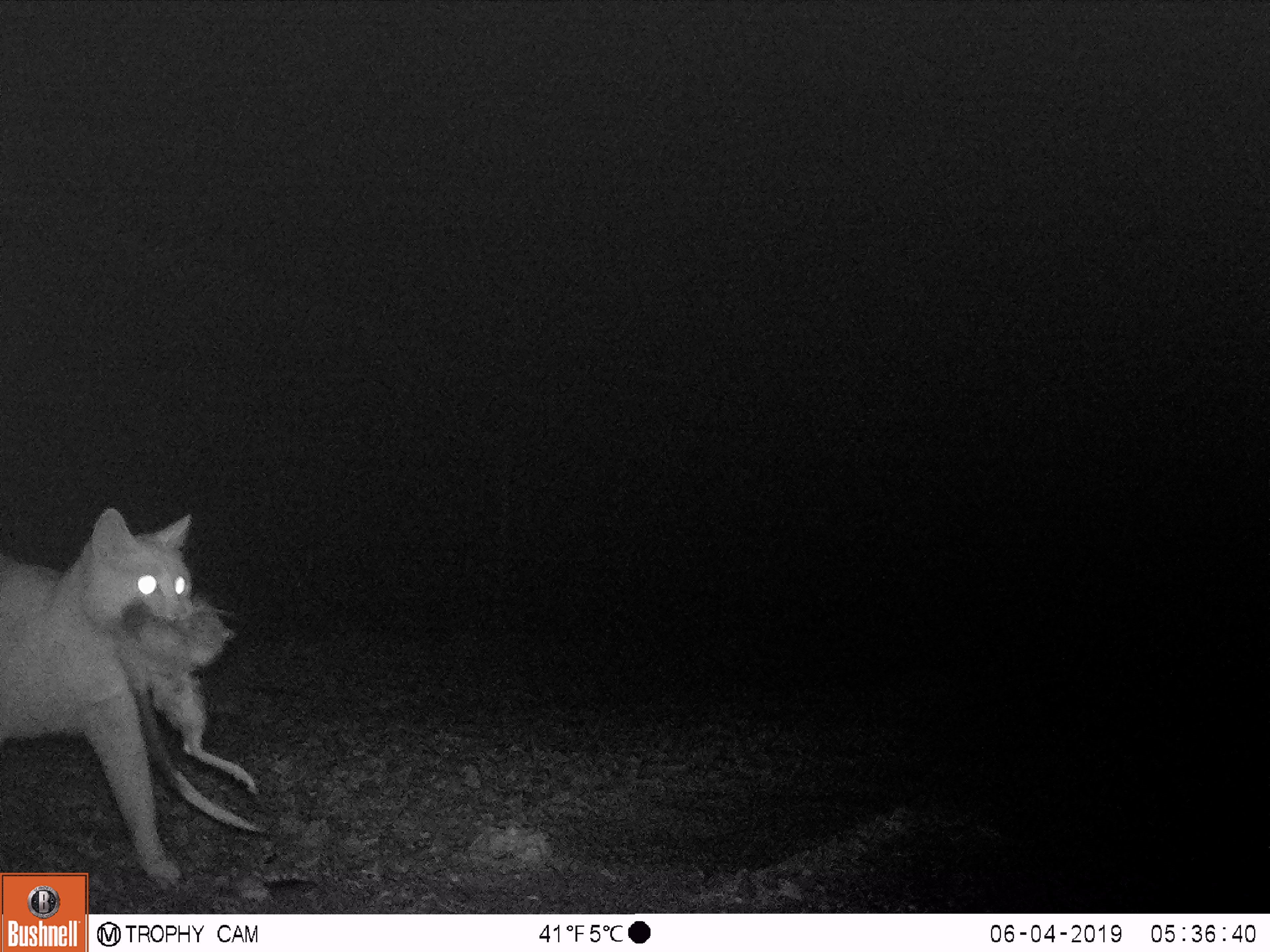 “We have had single cats wipe out an entire reintroduction programme. Just from one cat,” Moseby said, admitting that although the predators are her nemesis, they are “incredible creatures.”

“They learn very quickly. If they see a new animal in that environment and they learn to hunt it, they will just efficiently take it out until there are none left. They can vary their hunting behaviour, and we are up against a formidable predator and as fast as people are developing control methods for them, they are working out how to avoid them.”

Moseby says that animals such as bettongs that live on predator-free islands have become “stupid,” or in more ecological terms, they demonstrate prey naivety. Therefore, they stand little chance against a cat. While fencing cats out allows native mammal species to establish themselves, it is an expensive and unsustainable model for long-term conservation. And again the animals within them evolve to be naive.

Focus has thus turned in recent years toward whether native species can be trained to live with predators and avoid them.

Tactics such as spraying cat urine at them, leaving stuffed cats out, and startling them didn’t appear to make any difference. When the animals were released into the wild, they soon became cat kill. 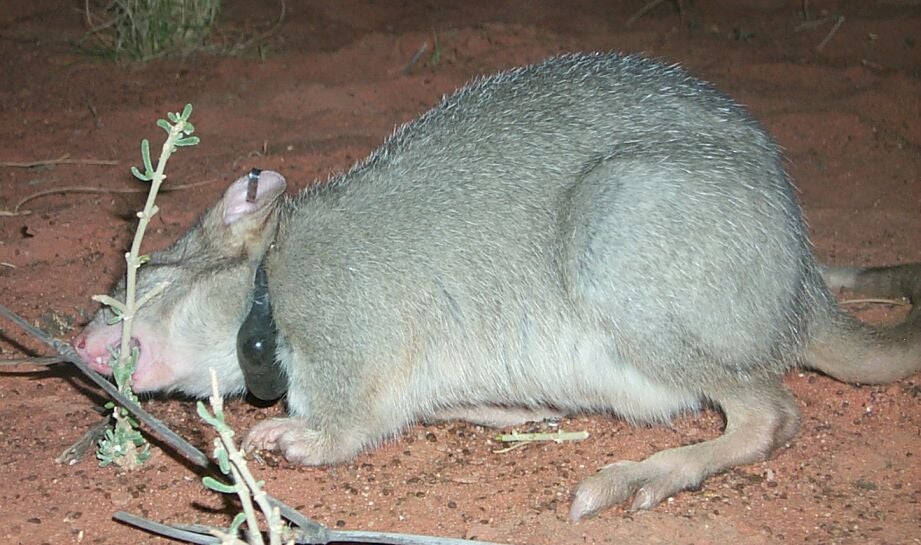 The native mammals were fitted with radio collars to monitor how they fared with feral cats. (Photo: Katherine Moseby/Arid Recovery)

So the decision was made to crank things up a notch by running an experiment over a number years where around 50 bilbies and 350 bettongs were put in a large yet enclosed area at Arid Recovery. Similarly-collared, but neutered, cats were also released, beginning with a solitary male. The researchers also observed a control area where there were no predators.

Alexandra Ross from the University of New South Wales is researching predation and prey naivety for her PhD and helped run the project. She published her findings earlier this year in the Journal of Applied Ecology, and the good news seems to be that you can teach a young bilbie new tricks.

“The problem is that once an animal sees a cat, it is pretty much dead so you need to make the behaviour change happen before they see the predator, which is not something that we can teach,” said Ross.

She equates the introduction of cats to letting the bilbies teach themselves. 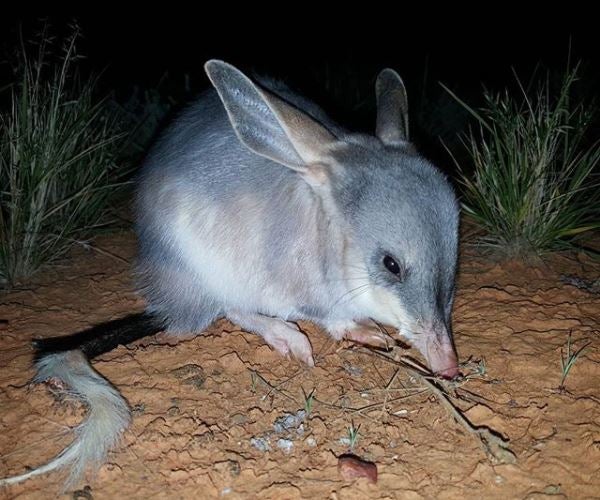 If the experiment sounds like it could have quickly turned into a wildlife version of the Hunger Games, Moseby agrees that there were many debates about the ethics of it within the team.

“I think I have spent most of my career trying to remove cats from areas and trying to reduce cat abundance, so it was very novel and different for me to be adding cats to populations,” she recalls.

Initially, there was no issue as the single cat appeared to be largely leaving the native species be. As the experiment progressed, researchers added in cats in more quickly to apply pressure to the bilbie and bettongs.

“We did want them interacting with cats and cats to be chasing them,” Moseby says. “We wanted them to see their fellow bilbies and bettongs being chased by cats and occasionally killed, because that’s how animals learn.”

Bilbies may only partially resemble rabbits, but they certainly breed like them. On average, they breed four times a year, and the population of the cat-free area ballooned. The population living with cats, however, remained stable.

After two years, 21 animals from each enclosure were removed and put in a third with 10 cats for a 40-day period. Ten of the “untrained” animals were killed compared with only four “trained” ones. 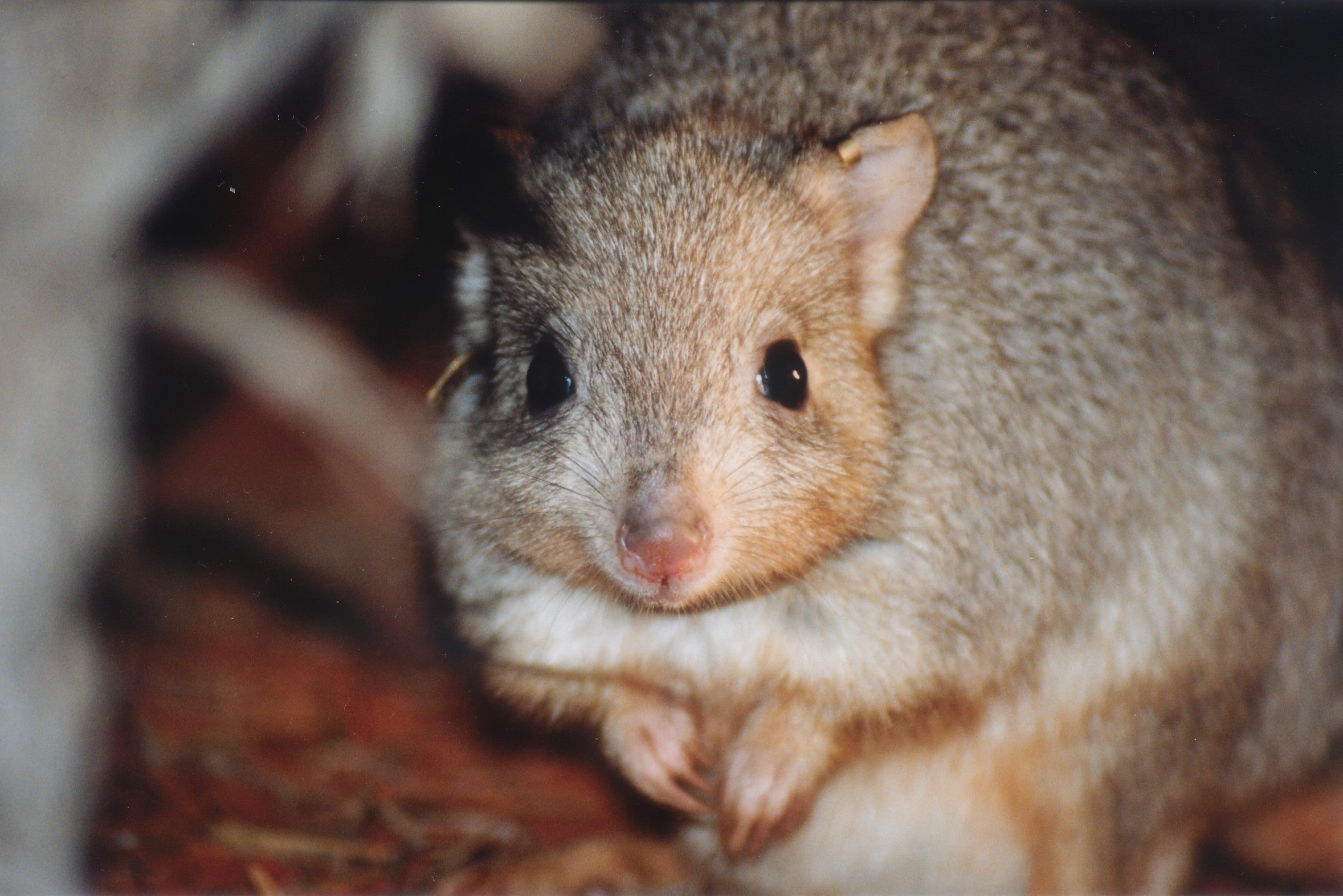 A burrowing bettong. They resemble a small kangaroo and were once the most widely distributed mammal on the Australian mainland. (Photo: Katherine Moseby/Arid Recovery)

Although the project has been conducted over a relatively short time, Moseby said that both marsupial species showed signs they may be adapting. A test where a member of the team approaches an animal to test its flight team showed they were becoming warier.

Measurements also show that the bettongs developed bigger feet – potentially making it easier to escape cats – while the bilbies hid more and spent less time out in the open where they would obviously make easier prey.

The challenge will now be to see if this new awareness and behavioral changes persist for longer. According to Ross, the methodology used is easily applicable on a wider scale both in terms of the time they’re exposed to cats, the numbers and the range.

Meanwhile national-level plans to consign cats to Australia’s natural history bin continue. The government pledged in 2015 to kill 2 million feral animals by next year. And all control options appear on the table. 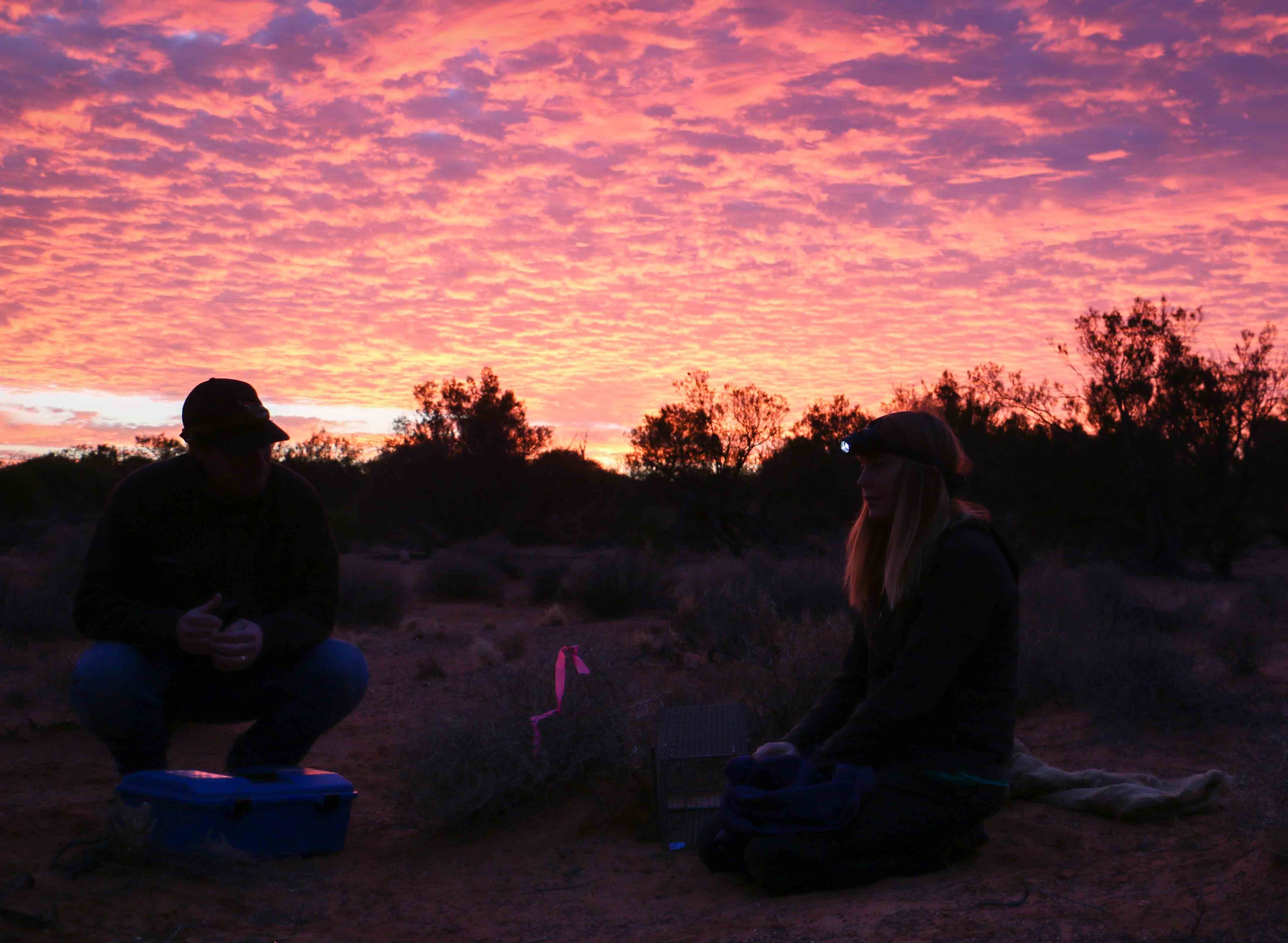 Moseby says she has nothing against cats as pets but that invasive species like the feral cat are a menace to native species. (Photo: Katherine Moseby/Arid Recovery)

Hunters use poisoned sausages to lure and kill the animals while the wildlife conservancy has been working with CSIRO, the country’s science agency, to explore the possible use of gene drive technology that would see genetically modified animals released into the wild that produce only male offspring when they breed.

These efforts are making some progress, but Moseby is among those ecologists that cannot see a time when a huge territory like Australia is predator free. She believes it may be an idea to release neutered cats on some of the islands where bettongs are currently living an easy life. The idea being to smarten them up.

She admits she does not yet know if the training and evolution strategy will prove to be a long-term success but is more than willing to keep trying different options.

“These are really unique animals and they are found nowhere else in the world and we have a responsibility to look after them and I am not prepared to see everything go extinct except cats and cockroaches,” she said. “It really isn’t looking good for our native species and we need to be trying novel and innovative ways, and if it doesn’t work and in 10 years time well this isn’t really going anywhere, then we’ll try something different.”