Despite designs that often make them look like they’re part of the US military’s advanced arsenal, Nerf’s dart-blasters are just toys, and as a result their performance often disappoints compared to other mock weapons like paintball guns or Airsoft rifles. That’s not the case with Dart Zone’s new PRO MK-1 blaster. At $180 (£144; UK pricing and availability TBA) it’s targeted at the most devoted dart blaster enthusiasts and offers enough power and accuracy to make you wonder if you should actually call it a toy.

What is it?: The most powerful and accurate toy dart blaster available today.

Last summer we went hands on with Prime Time Toys’ Dart Zone Adventure Force Commandfire and Quantum blasters and despite being a company much smaller than Hasbro, we were surprised to find it producing toys that outperformed Nerf’s dart blasters while introducing innovative new features – and doing it at a much cheaper price point. But Prime Time Toys’ new Dart Zone PRO MK-1 takes an entirely different approach.

At $180 it’s even more expensive than the giant £98 Nerf Elite Titan CS-50 which automatically fires up to 50 darts using a pair of high-speed motors. But the PRO MK-1 doesn’t have any motors and doesn’t have a thirst for batteries. It’s a one-shot-at-a-time manually primed dart blaster targeted at enthusiasts who love gathering with friends and their toy arsenals and spending an afternoon bombarding each other with foam ammunition. The PRO MK-1 promises to elevate these make-believe skirmishes to something a little more intense, almost bordering on a paintball-like experience. The PRO MK-1 will absolutely give you an advantage on the pretend battlefield, but at the same time you’ll never want to end up on its receiving end.

Using a pair of pull out connector pins and thumbscrews, the PRO MK-1 can be easily split in half for more convenient transport.

It takes less than a minute to disassemble the PRO MK-1.

While mostly a plastic housing, many of the PRO MK-1's internal structural components are made from durable metal which undoubtedly contributes to its price.

Even the adjustable stock on the back of the blaster can be completely removed to make it smaller for transport.

At 32 inches in length with its adjustable stock fully extended, the PRO MK-1 is long, particularly when compared to other single-shot manually-primed blasters. But it’s been designed to be semi-modular and by simply removing a pair of connector pins and a set of thumbscrews, it breaks down in half in less than a minute making it much easier to carry around in a backpack. It’s not especially heavy, though, as the PRO MK-1 is mostly made from plastic, including the housing, magazines, and many of the components inside. But some of the more critical and structural internal components – including the barrel – are made from metal which helps the blaster feel more solid and premium than anything in Nerf’s current lineup.

The PRO MK-1 is compatible with Nerf’s magazines and darts if you’ve already got a mountain of accessories.

It includes both standard length foam darts, and half-length darts which are more susceptible to breezy days.

Priming each shot requires the PRO MK-1's front handle to be pulled back until the firing mechanism locks in place, but the blaster’s strong spring means you’ll need to use more force than most kids can muster.

Despite being a one-shot affair, the PRO MK-1 allows you to quickly load 15 darts using a plastic magazine that’s compatible with the magazines used in Nerf’s products. If you’ve already got a big collection of Nerf toys, the PRO MK-1 will work with those accessories, including Nerf’s darts. However, the PRO MK-1 includes customised darts of its own (including a half-length option) with raised foam ridges that create a tighter seal in the blaster’s barrel to increase their velocity.

So how does it perform? Priming the blaster, which simply involves pulling back its front handle until the spring-loaded firing mechanism inside is locked in position, takes a surprising amount of force. It’s something I think an 8-year-old would struggle with, and it’s your first real indicator of what the PRO MK-1 is capable of. However, on several occasions I found this mechanism jammed, and would only start working again after randomly shaking the blaster and re-inserting the dart magazine. It was never a permanent problem, but I haven’t been able to figure out exactly what’s going wrong when it does.

But when properly primed, pulling the trigger delivers another pleasant surprise. I’ve been playing with Nerf toys for some 35 years now, and was not expecting the PRO MK-1 to have as much kick as it did. Prime Time Toys boasts a dart speed of 150 feet per second, which is just over 100 miles per hour. This was tested by one of YouTube’s most popular blaster enthusiasts, LordDraconical, using an actual chronograph, and he actually found the average speeds to be even higher, over 160 feet per second.

I tested the Dart Zone PRO MK-1 against two of Nerf’s manually primed blasters: the £29 N-Strike Elite Accustrike Alphahawk which uses redesigned darts for better speed and accuracy, and the £20 Nerf Rival Apollo XV-700, which fires tiny foam balls at speeds of up to 70 miles per hour. My targets were a collection of empty Diet Coke cans at a distance of exactly 10 feet from the tip of each blaster.

Several cans were harmed and injured during this review.

At a distance of 10 feet the PRO MK-1 left a sizeable dent in each can. But more impressive was its accuracy, hitting the target every time during our testing.

The N-Strike Elite Accustrike Alphahawk failed to even put a dent in the cans, which is not surprising as you need to upgrade to Nerf’s motor-driven dart blasters to get any real power. The Rival Apollo XV-700 left the cans with a sizeable dent, but accuracy was a big issue there. For every can I successfully hit with it, there were at least ten misses, which was disappointing given I was just 10 feet away from my targets. The PRO MK-1 delivered the most damage, leaving the cans with a deep indentation that gives a good idea of what it would feel like to get hit. (Not pleasant.) 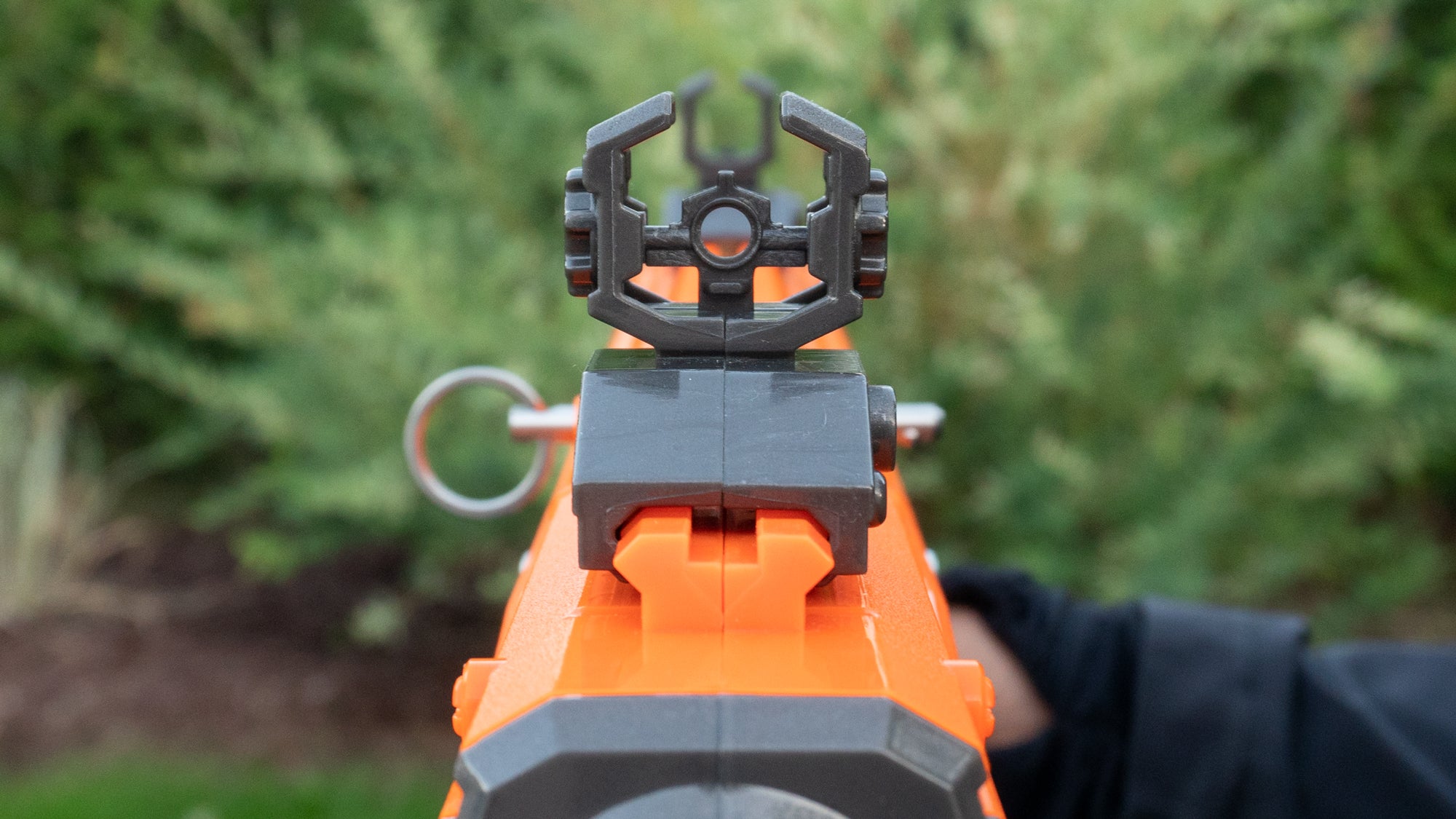 The PRO MK-1 includes a Picatinny rail on top so you can attach either the included sights, or a professional grade scope of your choosing.

But more satisfying than the PRO MK-1's ability to crush cans is that all that power makes it an extremely accurate blaster as well. During my Coke can tests every single shot from the blaster hit the target, and the included sights, which attach to an actual Picatinny rail on top, work surprisingly well. Prime Time Toys claims the blaster can hurl darts as far as 150 feet, with accuracy diminishing the farther away you are. But accurately hitting targets 50 to 60 feet away was no problem, as the darts leave the blaster with a satisfyingly straight trajectory. The impressive accuracy is the real reason the PRO MK-1 is worth considering.

As a small company, Prime Time Toys undoubtedly has to constantly deal with people referring to its Dart Zone products as Nerf knock-offs. But with the Dart Zone PRO MK-1, the company has finally distinguished itself as being a genuine competitor to Hasbro in this space. Nothing in the Nerf line even comes close to the PRO MK-1's power and accuracy, but at $180 it’s admittedly a hard sell to anyone but the most die-hard dart blaster fans.