Scientists in France have discovered hundreds of fossilised footprints belonging to a single group of Neanderthals. At 80,000 years old, the prints chronicle a single, precious moment in the lives of these extinct hominins.

Meticulous excavations at the Le Rozel Site in Normandy, France, from 2012 to 2017 have revealed 257 fossilised Neanderthal footprints, an analysis of which is published this week in Proceedings of the National Academy of Sciences. As many as 14 Neanderthal individuals were identified from the impressions, the vast majority of them adolescents and children. The prints, dated to 80,000 years ago, were initially laid down in muddy soil, and then quickly covered in sand, resulting in the excellent preservation, according to the researchers.

The lead author of the new paper, doctoral student Jérémy Duveau from the National Museum of Natural History in Paris, and his colleagues say it’s the largest single collection of archaic hominin footprints found at a single site. A mere nine Neanderthal footprints from four sites were known prior to this discovery.

The prints, because they were preserved quickly after being laid down, capture “a single life moment of a prehistoric group,” the authors wrote in the new study. Indeed, the trace fossils are an exceptionally rare snapshot into Neanderthal social organisation, offering evidence not derived from traditional sources such as bones, tools, or DNA.

The 257 footprints were found below the Normandy shore in a former coastal creek bed. A total of five trackways, in which two to three successive prints were laid down by the same individual, were identified. Over 40 per cent of the prints yielded robust scientific data, including full feet lengths, clear impressions of toes, rounded heel marks, and so on. Importantly, the 92-square-metre (990-square-foot) site was a former Neanderthal settlement, and not a trail or some other passageway. 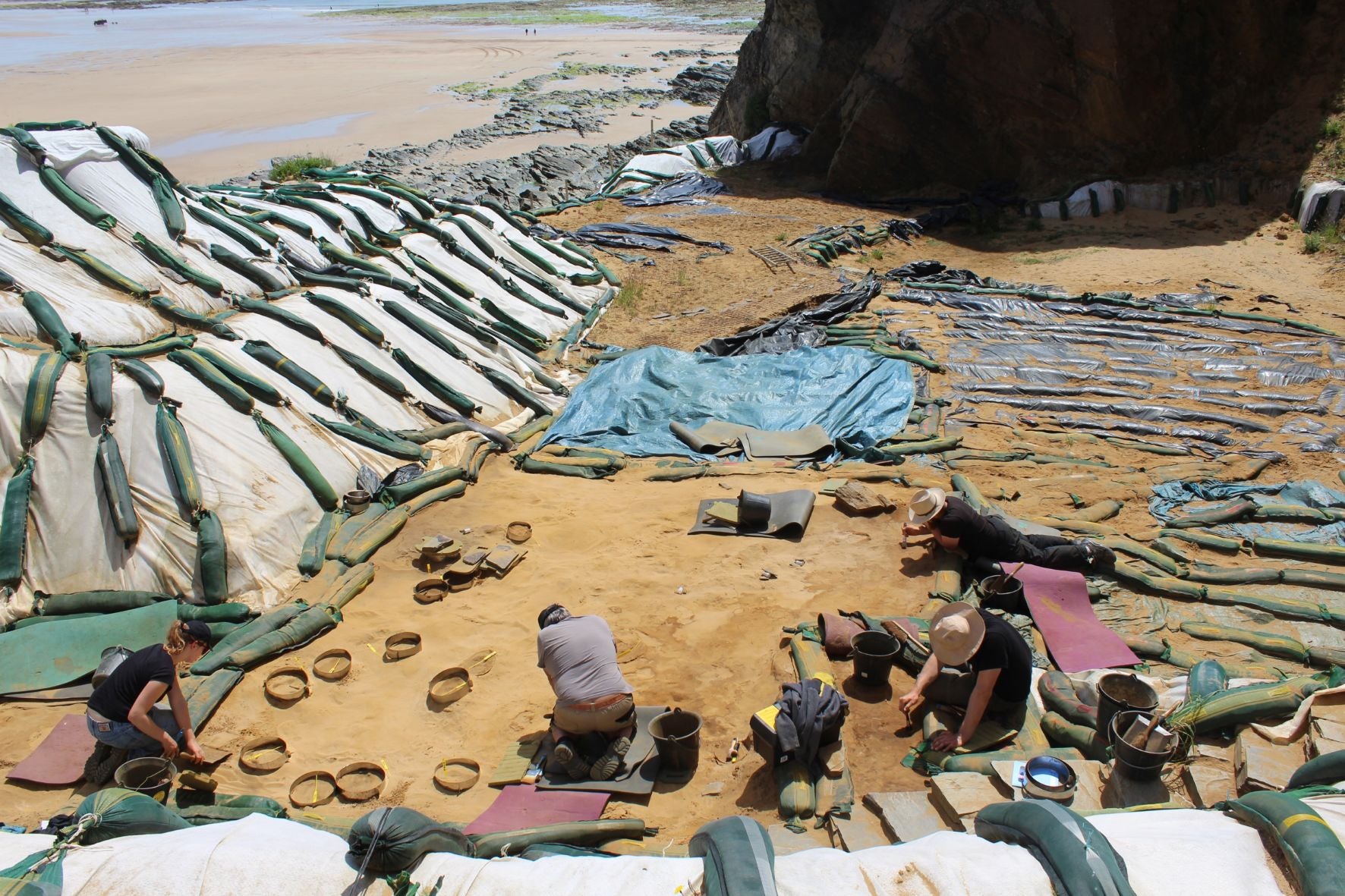 No Neanderthal bones were unearthed at the site, but the prints were associated with “abundant archaeological material,” according to the paper, including stone tools, evidence of animal butchery, fire pits, and areas used for flintknapping.

By analysing the impressions and comparing them to Neanderthal fossils found elsewhere, Duveau and his team were able to confirm the footprints as belonging to the extinct hominins. It’s important to point out that anatomically modern humans hadn’t yet arrived to Western Europe and wouldn’t for another 35,000 years. Also, the Denisovans – a early human group related to the Neanderthals – were nowhere near Western Europe at the time (as far as we know), living primarily in Asia. Neanderthals, based on the pre-existing archaeological evidence, were the only hominins in Western Europe at the time these prints were made.

Analysis of the shape of the feet also revealed insights into their respective owners. By measuring the length, width, and other features of the prints, the researchers were able to pick out individuals and also infer their approximate age and height. Approximately 10 to 14 individuals were identified in the new paper, most of them (90 per cent) adolescents and children, including one estimated at 2 years old. Previous research suggests Neanderthals lived in groups of between 10 to 30 individuals. The new finding strengthens this estimate.

That said, the high proportion of children in the group was unexpected.

“Indeed it is a surprise,” said Duveau in an email to Gizmodo. “It is difficult to understand the cause, especially since very little data is available on the size and composition of Neanderthal groups. We can only make hypotheses: perhaps the adults had gone off-site, although this is unlikely since the individuals occupied the site seasonally – it is unlikely that adults were away for that long,” he said. “The high proportion of children and adolescents can also be explained by higher adult mortality. It is currently impossible to know the exact reason for such a composition.”

At the same time, it’s important not to read too much into this single scene. Untold factors and circumstances could have led to the unexpected observation. Perhaps, for example, the children were attracted to the muddy soil, while the adults wanted nothing to do with it, a possibility not entertained in the new paper.

Another surprising aspect of the study is that Neanderthals may have been taller than we thought. Conventional estimates place the average height of Neanderthals at around 166 centimetres (5 feet, 5 inches) for males and 154 cm (5 feet) for females, but measurements of the Le Rozel footprints suggests some Neanderthals were quite tall. Specifically, the researchers discovered relatively long footprints, possibly belonging to a male Neanderthal, that correspond to an individual between 175 cm (5 feet, 9 inches) to 190 cm (6 feet, 2.8 inches), with confidence leaning toward the shorter figure. Still, that would be “relatively large for a Neanderthal,” said Duveau.

Measurements of actual Neanderthal bones, rather than footprints – which are subject to geological distortions over time – are a more reliable indicator of height in the fossil record, however.

Taking all this into account, we can imagine the scene as it was 80,000 years ago: This site, now a beach, was once “surrounded by herbaceous plains and some wooded areas,” Duveau told Gizmodo, while the sea, which now borders the site, “was further away.” The site was (and still is) surrounded by a cliff, which protected the small community from bad weather. And in terms of the daily activities, the Neanderthals worked to build stone tools and cut up animal carcasses.

“Currently, we do not know the role of children in these activities,” said Duveau. “The distribution of activities according to the age of individuals will be the subject of our future research.”

The image of teens and children running around – making footprints in the mud while their parents toil away at their daily chores – is consistent with what we’re learning about Neanderthals and a far cry from the outdated image of them as unintelligent, violent brutes. These hominins were socially complex, fully capable of providing aid to members in need.

As to why the Neanderthals disappeared some 40,000 years ago remains a mystery, but we’re getting closer to the answer – even if it is one fossilised step at a time.