India hopes to become just the fourth nation to successfully land a probe on the Moon and the first to land a probe near the lunar south pole. India’s Press Information Bureau is providing live coverage of the historic landing attempt beginning today at 8:30 pm UK time, which you can stream below.

Launched nearly 50 days ago, the $150 million (£122 million) Chandrayaan-2 lunar mission is entering into a critical phase. The Indian Space Research Organisation (ISRO) will attempt to land the Vikram probe on the Moon’s near side in the unexplored south polar region.

The landing is expected to happen today between 9:00 pm and 10:00 pm UK time. In India, the landing will happen early Saturday morning, between 1:30 a.m. to 2:30 a.m. local time. You can follow the landing right here by watching the video below.

Should the soft landing be successful, India will become just the fourth nation to accomplish the difficult feat, the others being the United States, the Soviet Union, and China. A failed Israeli lunar mission from earlier this year resulted in the Beresheet Probe crashing onto the Moon’s surface. So take nothing for granted – this will be a perilous operation. The moments leading up to the soft landing were described as “15 minutes of terror” by ISRO chairperson Kailasavadivoo Sivan, reports the BBC.

The Vikram lander, named in honour of Vikram Sarabhai (a pioneering figure in the Indian space programme), will use its onboard rocket engines to perform a “powered descent,” hopefully approaching the lunar surface at speeds of 2 metres per second (6.5 feet per second). The probe is expected to land between the Manzinus C and Simpelius N craters, according to ISRO.

To say this mission is a big deal for India would be a massive understatement, as the New York Times reports:

“There is a huge symbolic value attached to this mission,” said Pallava Bagla, co-author of a book about Indian space exploration and science editor of NDTV, one of India’s TV news channels. “This is all about national pride.”

Space has become a bit of a craze in India. In some Indian cities, Chandrayaan-2 posters have been plastered on giant billboards. Schoolchildren in space classes are launching rockets made from empty plastic bottles.

The landing at the Moon’s south polar region will be a first. A primary goal of the mission is to search for traces of water ice—an important resource for future colonists or explorers.

“We know that there’s water there, but we don’t know very much about it – how much there is, how it got there,” Timothy Swindle, director of the Lunar and Planetary Laboratory at the University of Arizona in Tucson, told NBC News MACH. “The more we can learn, the better, in part because if we want to explore the moon that would be a really great resource for human exploration.” 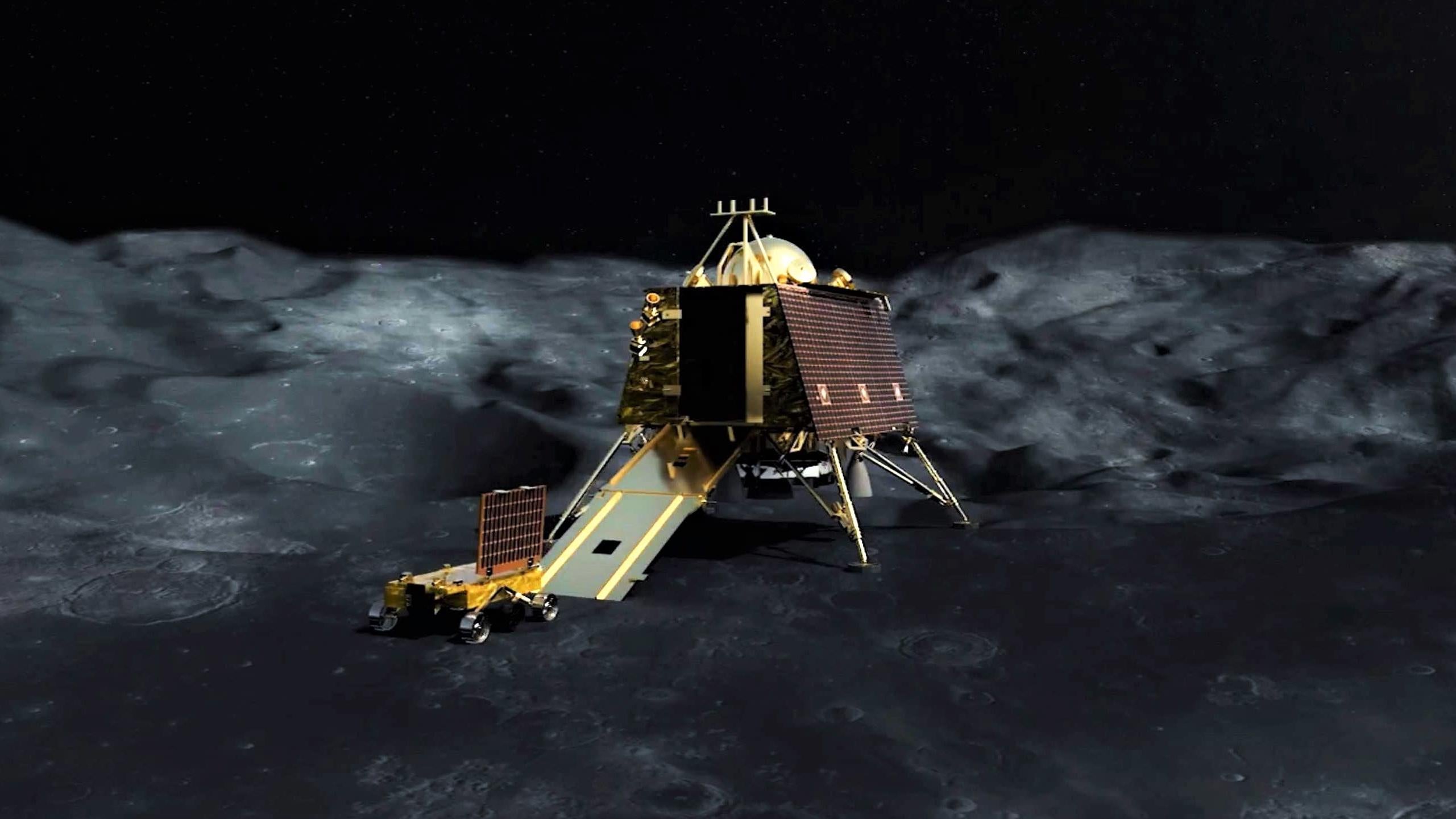 Artist’s depiction of the Vikram lander and the Pragyan rover. (Image: ISRO)

The Chandrayaan-2 mission will be a short one, lasting for a single lunar day, which is roughly equal to 14 Earth days. During this short timeframe, Vikram will use its onboard instruments to detect possible moonquakes and measure thermal conductivity (the extent to which the Moon can conduct electricity at the surface). Vikram will also study the lunar ionosphere, a zone ionised by solar and cosmic radiation.

But Vikram is not alone. The 1,450-kilogram (3,200-pound) lander will dispatch its companion, a six-wheeled rover called Pragyan, using a ramp. The tiny rover is expected to travel as far as a half kilometre (1,640 feet) from the landing site, using its onboard instruments to study the chemical composition of the surface.

Once the lunar night sets in about two weeks from now, however, both Vikram and Pragyan will likely freeze to death as temperatures plummet to as low as -170 degrees Celsius. Enjoy this mission while you can.