As reported from New York, 4 million of people in 150 countries turned out for a gigantic global climate strike, a resounding demand to world leaders to act on climate change. Not so much in Russia.

While Berlin, London, and Melbourne reported drawing around 100,000 participants each, Greenpeace Russia tweeted photos of only sparse gatherings in cities across Russia. In Moscow, a small group of activists took turns holding signs one at a time, due to Russia’s restrictive laws on public protest.

A line of protesters waiting for their turn to participate in single person protest in the center of Moscow https://t.co/d9BWNshidM

Friday’s global strike was the latest in a series of youth-led actions, galvanised in no small part by a 16-year-old Nobel Prize nominee Greta Thunberg. A lesser-know activist, 25-year-old Muscovite Arshak Makichyan, inspired by Thunberg, has been picketing in Moscow alone every Friday for 28 weeks.

“For me, it was very important to do something, and [doing it alone] was the only way,” he said. 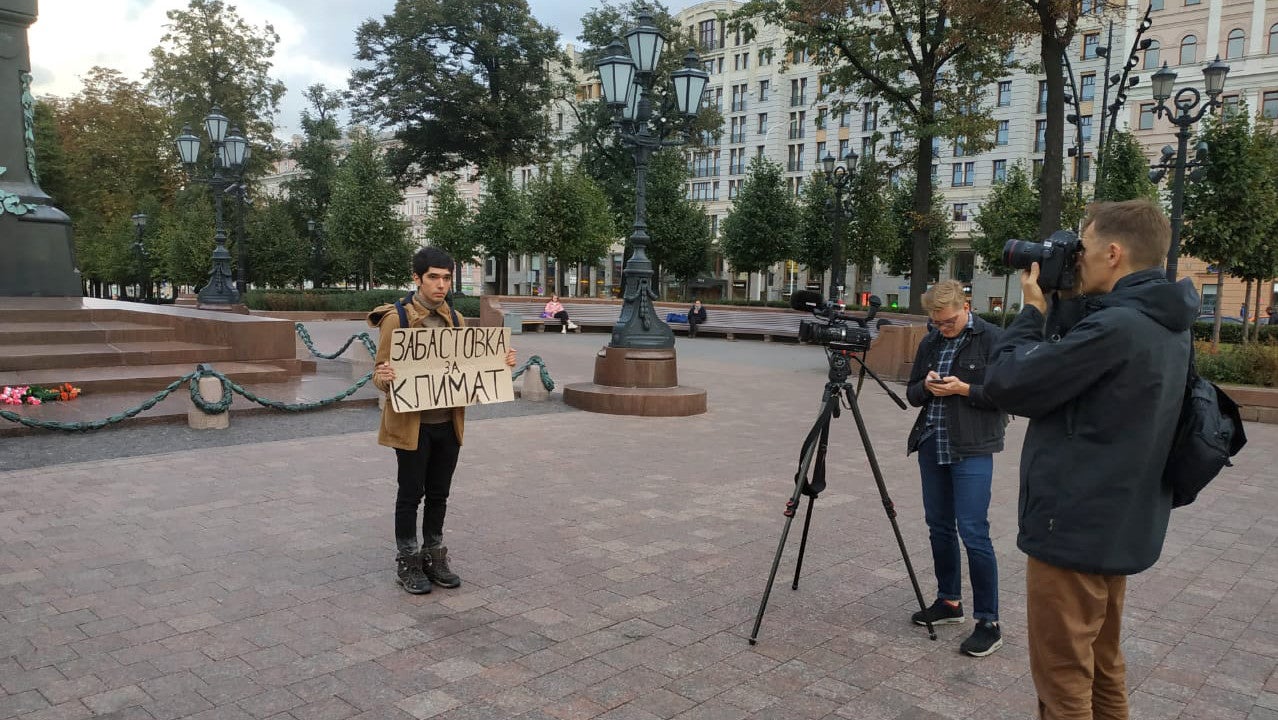 Over the years, the Russian government has craftily thought up numerous methods of banning protests, but there’s a workaround: silent picketers are allowed to protest solo without a permit (though authorities, too, have found workarounds). Makichyan said he applied for a Climate Strike permit but was refused. He said that around 30 or 40 people arrived to join him for the Climate Strike picket on Friday, each waiting their turn to hold a sign.

Friday’s action comes weeks after a recent series of unsanctioned and sanctioned opposition protests in which at least 2,000 protesters and their leaders were detained.

In March, Makichyan estimated that around 50 people joined him for a sanctioned climate strike in Sokolniki Park, which he described as “so quiet... you might as well protest in a forest.” Globally, more than 1.5 million young adults turned out. He claims that authorities cancelled their May climate strike due to a permit “technicality.” Young adults turned out at roughly 1,600 protests in 125 countries.

Photographer Konstanin Fomin said that a protest of waste management practices was scheduled to take place at the park on Saturday.

Speaking to the Moscow Times in April while holding a sign reading “the media is silent about global warming, and we are the ones that will suffer,” Makichyan said that “most of the population [in Russia] doesn’t really understand what global warming is.” In 2018, the European Commission and Netherlands Environmental Assessment Agency found that Russia was the world’s fourth top carbon dioxide emitter.

“So quiet... you might as well protest in a forest.”

“Authorities very often reject [protest] applications on spurious grounds,” said Natalia Prilutskaya, Amnesty International’s Regional researcher on Russia. “They say there is another protest on the same day at the same time, which could be legitimate. But very often, it’s suspected that these protests are fake or by pro-government groups. And then often the allocated places for protests are very far from the city or in a park at 7 pm where people can’t really see what the protest is about.”

Climate groups organising protests can also be suppressed by various mechanisms, Prilutskaya noted. Any NGO which accepts funding as low as a single dollar from outside of Russia must label itself a “foreign agent,” the negative connotation of which makes lawmakers reluctant to work with them.

One such “foreign agent,” the co-founder of the Russian environmental activist group Ecodefense, Alexandra Korolewa, has recently fled to Germany where she has applied for political asylum. Refusing to pay fines for not labelling the organisation “correctly,” she reportedly faces a potential two-year prison sentence. (At this writing, we have not yet heard back for request for comment.) Human Rights Watch has called 2019 a “bleak year” for human rights in Russia, with crackdowns on social media and “fake news” legislation censoring online criticism of authority.

“On the plus side,” Prilutskaya said, “I think it’s really encouraging to see that there’s more and more laypeople who, until probably a year ago, didn’t even want to get into the details of what’s going on with the local rubbish dump or coal mine,” in the Arkhangelsk and Kemerovo regions, respectively. “When pressure inside Russia grows, with mass activism, then some changes are possible. They may be minute and slow, but they’re possible.”