By Eleanor Fye on at

Halloween offers so many opportunities for our favourite genre shows to play with the spooky, strange, and supernatural…but it’s also an opportunity for all these interesting storytelling elements to crash and burn.

Instead of talking about the best examples of shows that made amazing choices with costumes and candy, we’re counting down some of the worst Halloween episodes we’ve seen on TV. This list isn’t an end-all be-all of horrible specials – The Simpsons has so many good and bad “Treehouse of Horror” episodes that its spooky offerings could be its own list – but it’s a collection of some particular standouts. And they would have gotten away with it too, if it weren’t for this meddling post. (Image: Warner Bros.)

You’d think Scooby-Doo would have Halloween specials on lock after 50 years on air. Sadly, 2013’s Scooby-Doo and the Spooky Scarecrow feels more like a ghost of what made the Scooby gang fun in the first place.

The plot of this direct-to-DVD special is the same as most Scooby-Doo episodes: a business is haunted by some guy dressed up as a ghoul...and he would have gotten away with it, if not for those meddling kids! But this interpretation is a bummer, bringing nothing new to the table except filming monsters on iPhones, ultimately turning a nostalgic, stoner-comedy property into a joyless slog. Ruh-roh. The scariest thing is how dated it is. (Image: Comedy Central)

South Park has a history of well-written Halloween specials, which is maybe why “Goth Kids 3: Dawn of the Posers” is such a letdown.

The basic premise is that the goths of South Park are being body-snatched and replaced by emos, and gothdom worldwide is under attack. You could see yourself laughing at the premise in the MySpace and LiveJournal days, right? When goth and industrial bands were replaced seemingly overnight by pop-punk acts like Hawthorne Heights, and teenagers started sprouting nautical star tattoos and ill-advised anime-protagonist bangs?

Only thing is: This episode aired in 2013. By then, the premise was stale and the writers didn’t do much more with it, wasting some of the funniest characters in South Park, Colorado. Camp ‘90s classic Hercules was not known for its historical accuracy or its storytelling finesse. Still, Halloween-themed episode “Mummy Dearest” manages to fail on almost every level.

Essentially, there’s an Egyptian princess who is looking for an evil mummy. She asks Hercules to help her find the mummy, but Hercules is hesitant because she’s extremely into him...and also, she owns slaves. Meanwhile, merchant huckster Salmoneous – basically an antisemitic caricature come to life – has purchased said mummy for his House of Horrors, but the mummy escapes and threatens to, I dunno, eat people?

The episode relied on bad stereotypes of Jewish and Egyptian people, and wrapped up with Hercules ending slavery in Egypt. White saviour, ahoy! 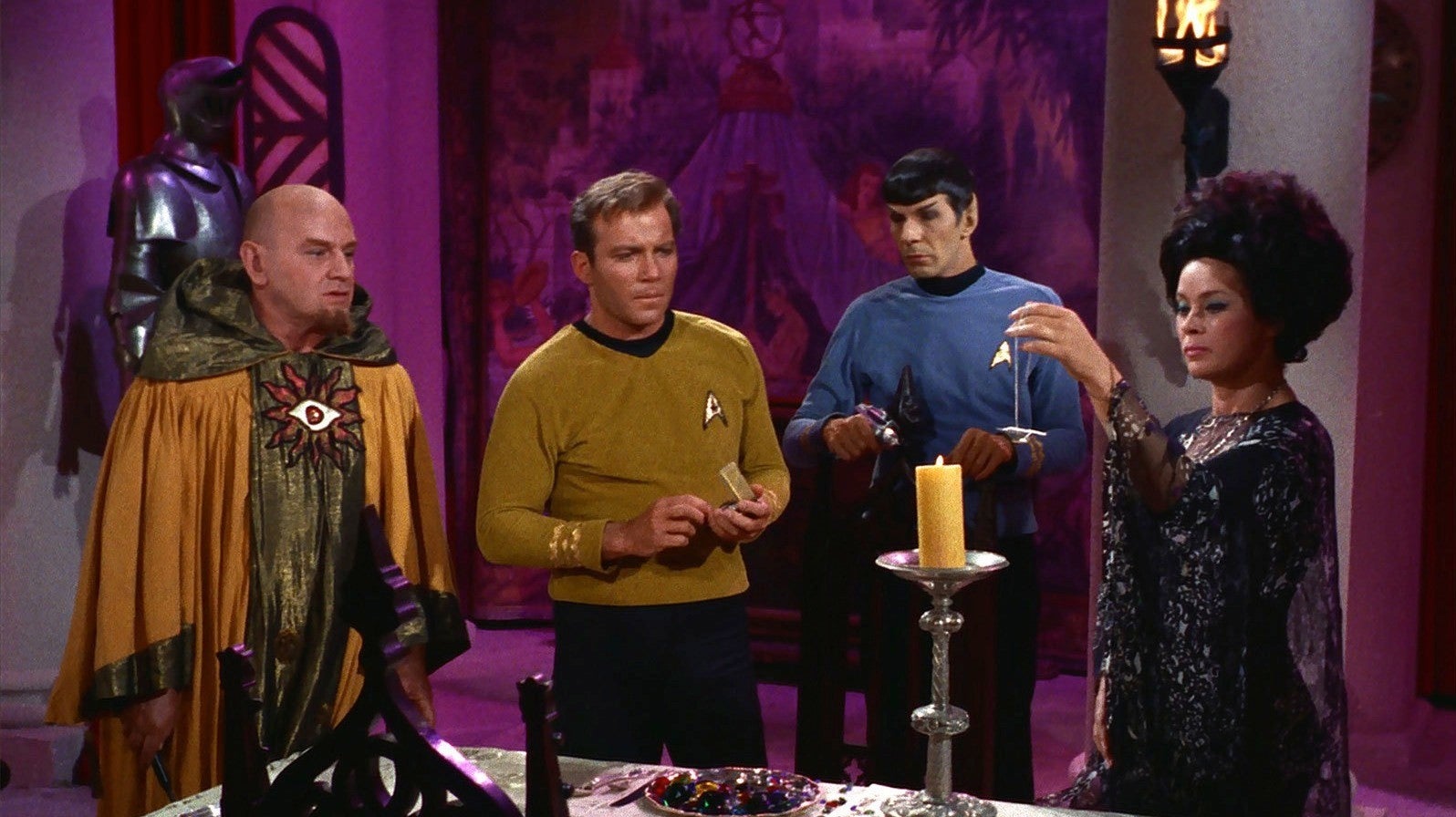 The Federation’s utopia has seemingly evolved beyond Halloween and celebrations like it, so this episode of Star Trek feels random at best.

The crew is stuck on a haunted castle planet where a wizard and a cat-witch-lady threaten Captain Kirk with a magical USS Enterprise keychain. In a twist you could probably see from miles away, they’re actually aliens disguised as sci-fi magicians. Space communists don’t mesh with spooky terribly well, so Star Trek wisely never attempted a holiday special again.

Incredibly, this script was written by Hugo- and Bram Stoker-award winner Robert Bloch, a well-regarded sci-fi, mystery, and horror writer who had a successful career spanning half a century; he started writing under the guidance of H.P. Lovecraft, and his 1959 novel Psycho was adapted by Alfred Hitchcock into perhaps the most important horror film of all time. Even the greats occasionally stumble. 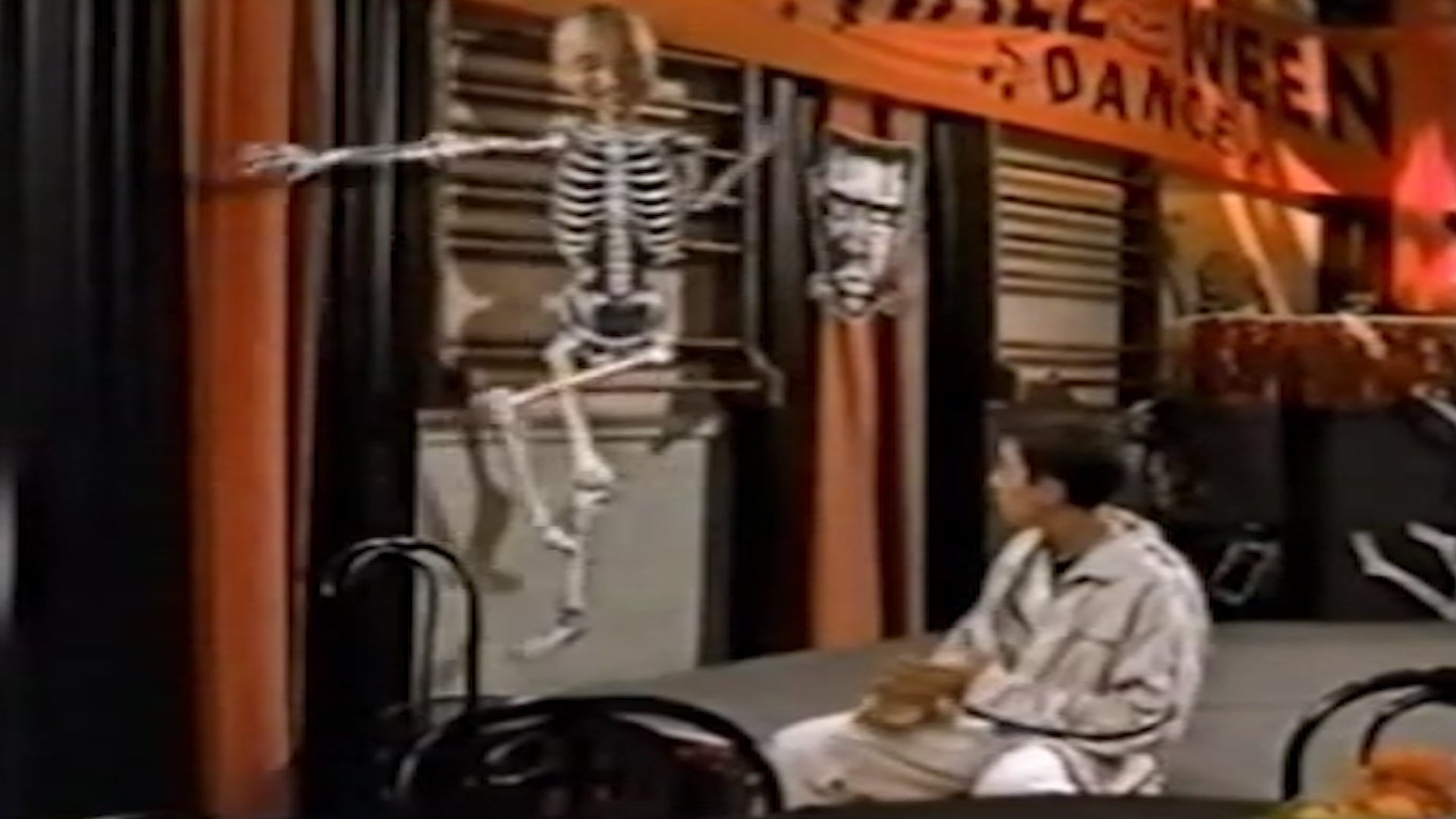 Hey skeleton, you’ve got a little something on your face. (Image: ABC)

Our number one spot goes to a series long forgotten. After the success of Sabrina, the Teenage Witch, family-friendly supernatural comedies were all the rage…for about three months in 1997. One of the worst attempts at copying the supernatural-family-sitcom Sabrina had mastered was the ABC series Teen Angel, in which high schooler Marty eats a six-month-old hamburger as a dare, then dies and comes back as a guardian angel for his best friend Steve.

In a series of comedic mishaps in “I Love Nitzke,” Marty fires a bunch of Cupid’s arrows (nothing more Halloween than Cupid?) at Steve’s mum, aunt...and his kid sister, who are now all infatuated with Steve’s ultra-conservative driver’s ed teacher, Mr Nitzke. The jokes from Mr Nitske, a Breitbart article come to life, were bad even then: “Before you, there was only one woman in my life: America. And I had to share her with immigrants!”, Mr. Nitzke told Steve’s mum as they slow-danced. How romantic!

The Halloween dance is eventually saved – and I am not making this up – by God’s cousin Rod, played by Ron Glass of Firefly fame, who appears as a dancing paper skeleton, which is certainly a choice. The concept of the show was weirdly morbid, so like its protagonist, Teen Angel was killed in its youth after only one season...thankfully not before blessing us with one of the worst Halloween specials of all time.

Be sure to leave a comment with your least-favourite Halloween TV episodes... as well as the ones that still scare you to this day.