9 of the Best Worst Horror Movies Ever Made

If your horror-movie enjoyment requires high production values, plots delivered without yawning holes, and dialogue that always makes sense, well, best move along. If, however, you delight in horror that’s so “bad” it’s gone all the way back to good – and is genuinely entertaining – have we got a fun list for you.

In the early 1960s, exploitation filmmaker Herschell Gordon Lewis surveyed the drive-in landscape and decided it needed to get a lot bloodier. History would go on to call Lewis, who was a marketing genius first and foremost, the “Godfather of Gore,” and it all started with Blood Feast, the tale of a mysterious caterer named Fuad Ramses (played with appropriate wild-eyed energy by Lewis go-to Mal Arnold) who becomes obsessed with collecting body parts to bring an Egyptian goddess back to life. Blood Feast’s most infamous gag – literally – still holds up over 50 years later; you’d be hard-pressed to find a more disgusting tongue-ripping scene. The rest of the movie, made on the cheap, hasn’t held up as well, but its kookier elements (including what’s clearly a spray-painted mannequin standing in for a statue of the goddess, and the mention of a book titled Ancient Weird Religious Rites) only add to its charm.

Before there’s even a line of dialogue, there’s a fart joke; before the opening credits come to an end, there’s full-frontal male and female nudity. This cheerfully lurid 1987 cult classic (or clas-sick, if you will) follows the mayhem that infects Brooklyn’s homeless community after a disgruntled convenience store owner starts selling bottles of “Viper” – a strange, ageing booze he discovers rotting away in his basement. Anyone who drinks it melts down into a rainbow of colors, which translates to several spectacularly gross on-screen deaths; there’s also a memorable decapitation and a game of keep-away involving a certain severed male body part. Director Jim Muro went on to become an in-demand Stedicam operator – he worked on on Terminator 2: Judgment Day, The Abyss, Point Break, Casino, and many others – and has directed a lot of TV, but Street Trash remains his sole feature directorial credit. Somehow, that makes it even more triumphant.

This is basically the low-budget, exploitation version of Isle of Dogs, crossed with the “Lawnmower Dog” episode of Rick and Morty. Not to be confused with a recent Australian horror film with the same title and similar themes, the 1977 Pack is set on an island off the coast of Canada that’s popular with vacationers but has few year-round residents. Thanks to asshole visitors who make a habit of cruelly leaving their dogs behind when the summer ends – who does that? – the wilderness has a growing population of feral canines who form a gang and (understandably) start aggressively defending their turf. The Pack is obviously part of a huge wave of animal-attack films that were designed to cash in on the blockbuster success of Jaws, but most of those films zeroed in on predators we’re already taught to fear – like great white sharks, or the massive star of 1976's Grizzly. The Pack proposes that there’s the thinnest of lines between obedient pet and feral beast, with the trained canines (no offense meant to human star Joe Don Baker) turning in some surprisingly effective performances. 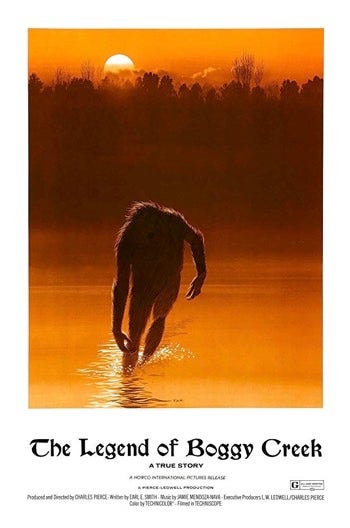 4) The Legend of Boggy Creek

“I doubt if you could find a lonelier, spookier place in this country than down around Boggy Creek,” muses the placid narrator of this 1972 docudrama, Charles B. Pierce’s earnest investigation into sightings of a Bigfoot-like creature said to frequent the swamps around Fouke, Arkansas. Though it’s filled with on-location re-enactments, The Legend of Boggy Creek is low on actual monsters and is absolutely not scary. That said, it no doubt sent a chill down the backs of some in Hollywood, since Pierce made it for a shade over $100,000 with the help of local college kids – and it turned a huge profit, spawning multiple less-successful sequels (although part two did get the Mystery Science Theater 3000 treatment), an iconic poster, and earning indisputable cult-oddity status.

B-movie maestro Larry Cohen (whose filmography includes It’s Alive, God Told Me To, and Q: The Winged Serpent) dreamed up this pitch-black horror comedy about a frothy white substance that bubbles up from the Earth and tastes so delicious it becomes a dessert sensation poised for world domination. Everyone who tries it “can’t get enough of the Stuff,” as the ubiquitous jingle goes, so naturally Big Ice Cream is thrown into a panic. A former FBI agent (Cohen favourite Michael Moriarty) and a junk food kingpin (Garrett Morris) dig into the conspiracy and the military gets involved. Before long it becomes very apparent that the Stuff is turning its addicts into hollowed-out zombies, in addition to being a gloppy, sentient creature, kind of like a really yummy, body-snatching cousin to the Blob (with a side of They Live). The fake commercials and relentless branding that pop up throughout the film make it very clear that The Stuff is meant to be satirical, and if the “monster” is never exactly scary, it’s definitely very sinister – in addition to being totally gross.

“You don’t have to go to Texas for a chainsaw massacre” enthuses the trailer for this sleazy 1982 slasher, which came out at the height of the genre’s popularity but is distinguished from other entries by a couple of important factors. One is that it’s really, really gory, being that it’s about a maniac who’s stalking a college campus in search of fresh body parts. Another is that even though Pieces is set in America, it was made in Spain, which means that a movie already filled with oddities (like a plot device that sees a famous tennis player go “undercover” to help catch the killer) is rendered even stranger by dubbing even the English-speaking actors. And, for a movie filled with horrific gore, the scariest scene in Pieces is actually this one, in which star Lynda Day elevates overacting to an art form.

The O.G. C.H.U.D. introduced the world to a new, fun-to-say acronym that referred to its sewer-dwelling, zombielike monsters (it stands for Cannibalistic Humanoid Underground Dweller). But the 1989 sequel is included here because it pushes the gory envelope deeper into cornball territory, aspiring to be a black comedy way more than anything that’ll give you nightmares. As we begin, there’s one C.H.U.D. remaining in a shady, top-secret government project to create supersoldiers – a project that has, unsurprisingly, just been defunded, to the chagrin of an obsessed military bigwig played by Robert Vaughn. Prized specimen “Bud” is flash-frozen and taken to a nearby disease control centre, where he’s promptly stolen by ne’er-do-well high school doofuses who suddenly need a corpse for science class. Imagine if the stiff in Weekend at Bernie’s woke up ravenously hungry. Before long, Bud – who is kind of a doofus himself, to be honest – is creating a posse of suburban mutants, who blend in perfectly because it’s Halloween and everyone assumes the C.H.U.D.s are in costume. Even the C.H.U.D. dog gets a free pass.

8) I Still Know What You Did Last Summer

Because once around with the hook-handed killer wasn’t enough, Hollywood had to cook up a way to strand the first film’s final girl (Jennifer Love Hewitt) on an island paradise that comes equipped with a dangerously faulty tanning bed, a rapidly-approaching hurricane, a dreadlocked stoner dude played by Jack Black, an oily desk clerk played by Jeffrey “Re-Animator” Combs, and a maniac who’s still pissed about that thing that happened not last summer, but the summer before. HE STILL KNOWS. It’s amazing, in the era of Scream, that a movie so un-self-aware made its way into cinemas – and it’s equally amazing how much dumb fun it is to watch and mock: A major plot point hinges on the fact that kids who’ve made it all the way to college somehow don’t know the capital of Brazil.

Well, obviously no list of the best worst horror movies would be complete without Troll 2, the 1990 cult juggernaut so infamous it spawned a documentary 19 years after its release, literally titled Best Worst Movie. The doc is directed by Michael Stephenson, who was just a tween when he starred in the in-name-only sequel, which is actually about goblins rather than trolls, was directed by an Italian crew with a limited ability to communicate with the film’s American cast, and contains some of the horror genre’s most majestically nonsensical (and therefore highly quotable) lines. Watch Troll 2, watch Best Worst Movie, eat a giant bologna sandwich, and repeat.