A Gigantic Iceberg Has Broken Off Antarctica

A huge iceberg weighing upwards of 350 billion tonnes has broken off the Amery Ice Shelf in Antarctica.

AFP reports the calving event happened at some point between 24 and 25 September, as evidenced by US and European satellite images. Dubbed D28, the gigantic chunk of ice measures 1,636 square kilometres (632 square miles) in total area, according to Scripps Institution of Oceanography. The iceberg measures around 210 meters thick and weighs around 350 billion tonnes.

The iceberg calved from Antarctica’s Amery Ice Shelf, the third largest floating platform of ice on the frozen continent. This particular ice shelf hasn’t produced a ‘berg like this since the 1960s, when it calved an absolutely gigantic iceberg measuring 9,000 square kilometres (3,475 square miles) in size, according to the BBC.

D28 is now slowly drifting westwards as it’s pushed by ocean currents and winds. It could take years for the iceberg to completely break apart and dissolve into the ocean. Accordingly, D28 is being closely watched by satellite as it poses a potential threat to ships passing by the area. 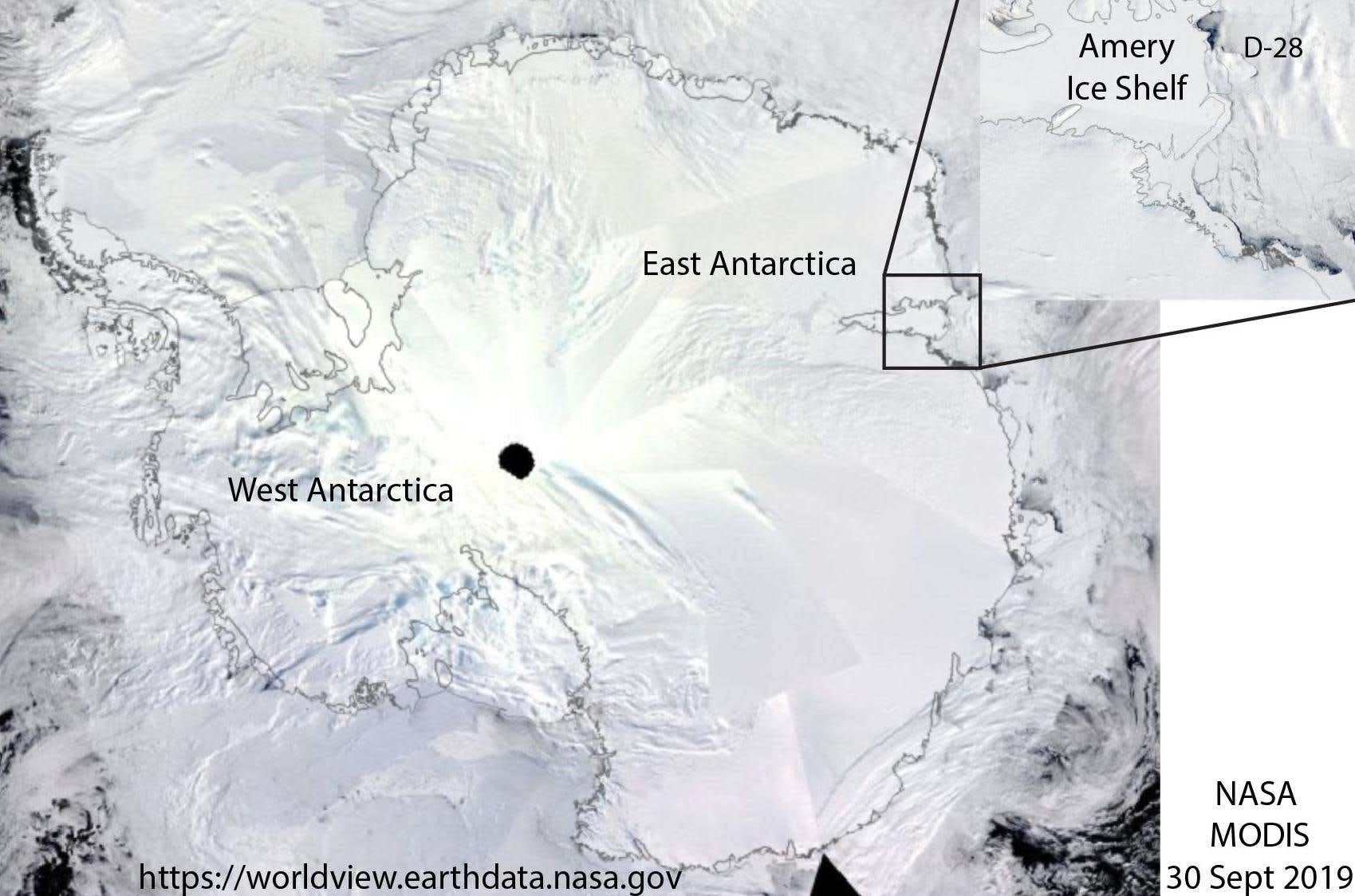 Map of Antarctica showing the location of the Amery Ice Shelf. (Image: NASA/MODIS)

The melting iceberg won’t affect sea levels because ice shelves already displace water. The Amery Ice Shelf serves as an important drainage channel for the eastern portion of Antarctica. Over time, glaciers flow from the land and into the sea, forming the floating ice shelf. Eventually, the build-up of all this snow and ice causes large chunks to fall into the sea, in what is a completely normal and recurring geological process. The Amery Ice Shelf calves about every 60 to 70 years, according to the Scripps Institute, and this latest event – which was predicted – has not been linked to climate change.

“It’s really important that the public doesn’t get confused and think that this is climate change,” Scripps glaciologist Amanda Fricker told AFP. To which she added in a Scripps tweet: “This event is part of the ice shelf’s normal cycle though and, while there is much to be concerned about in Antarctica, there is no cause for alarm yet for this particular ice shelf.”

Fricker says this calving event underscores the importance of long-term observations in Antarctica to understand the natural cycle of ice sheets, so that scientists may better disentangle climate change-induced events from the natural "background" cycle.

That said, this particular calving event caught Scripps scientists a bit off guard, as they were expecting another portion of the Amery Ice Shelf – a region aptly nicknamed the “loose tooth” – to break off. So while scientists knew a calving event was imminent, they had pinpointed the wrong section.

In addition to watching the progress of D28, scientists will also monitor the Amery Ice Shelf itself to see how the loss of such a gigantic section might affect its stability.

East Antarctica is home to some of the continent’s most stable ice. While research published earlier this year shows it is losing ice and has made measurable contributions to sea level rise, the remoteness of the region means scientists are still learning more about it each year.

As big as D28 is, it’s not the biggest to calve from Antarctica in recent years. In 2017, the Larsen C Ice Shelf shed an iceberg, dubbed A68, that measured 5,800 square kilometres (2,240 square miles) in total area. Famously, A68 produced a smaller iceberg in 2018 that was weirdly geometrical in shape – an eye-grabbing structure known as a tabular iceberg.