For some people, a bicycle provides nothing more than a casual cruise on a lazy Sunday afternoon. For others, it’s a reliable daily commuter, and a bike can even be a great way to stay in shape and shed a few pounds. Cannondale’s new Treadwell EQ makes a strong case that a bike can be all three of those things, and at a price that doesn’t make you feel like you should be competing in the Tour de France to justify what you spent.

What is it?: A bike designed for casual riders who still want to track their performance.

Price: Starting at £600, depending on size and accessories.

Like: An extremely comfortable ride and streamlined stat tracking.

Dislike: A challenge to assemble and the app could use some polish.

After a recent transition to suburbia I sought out a new bike this past summer to help get my bum off the sofa. Wandering through my local cycle shop I’ll admit I was sorely tempted by the streamlined and impossibly lightweight carbon fibre creations of Cannondale, one of the few bike brands I actually recognise. But as a novice cyclist, I couldn’t bring myself to committing thousands of pounds on a bike designed for competitive and dedicated athletes.

But Cannondale doesn’t only make bikes destined for Olympic velodromes any more. The company’s new Treadwell line, which starts at £600, is targeted at those who use bikes for everything but setting course records and winning medals. With retro styling that’s reminiscent of a ‘50s era Schwinn, the Treadwell EQ (the version we tested) looks unintimidating and approachable. It’s designed for casual cyclists, and to that end Cannondale has included a bunch of practical features that make the EQ comfortable to ride and easy to maintain. It also caters to the app addicted generation with built-in sensors for stat tracking that even your parents could easily use to keep tabs on all the calories they burn. 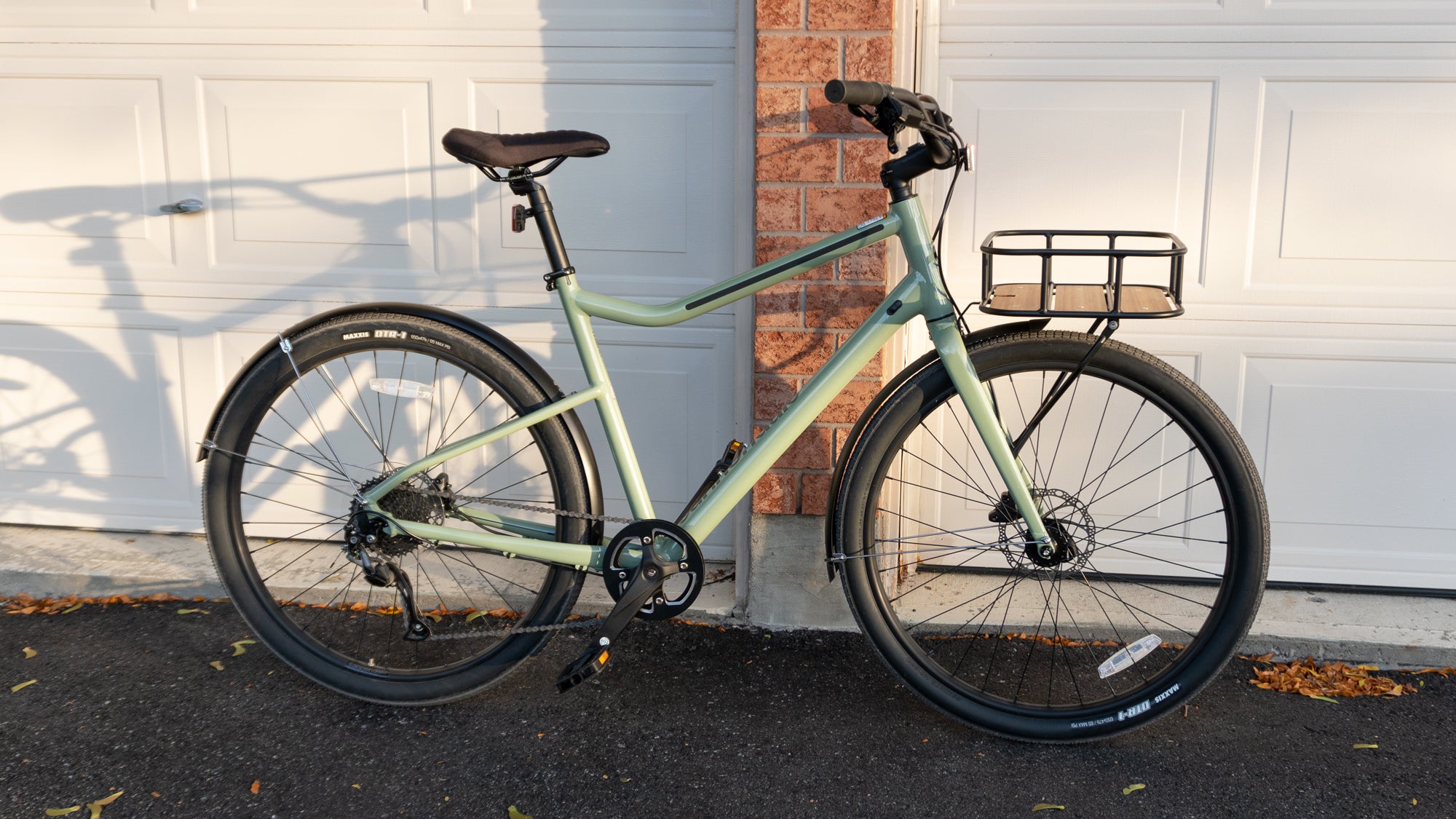 It looks a little like the bike your dad grew up with, but the Treadwell EQ’s design brings a lot of well thought out functionality to your ride. (Photo: Andrew Liszewski/Gizmodo)

I have to admit that at first glance I wasn’t the biggest fan of the Treadwell’s retro design, but after actually riding it for a few weeks, I’ve come to realise the functionality of the design is the real appeal here, and more often than not I’ve found myself choosing the Treadwell EQ over my Trek bike for everything but more demanding off-road rides.

I’ll also admit that I never saw myself as someone who’d ride a bike with a basket on the front (an option included on the higher end EQ model) but a handful of runs to the shops proved it’s an accessory that I’m not sure I can live without now. It definitely beats trying to cram groceries into a backpack, and with enough bungee straps to keep everything secure, the basket essentially becomes your bike’s boot.

I never thought I’d be the type of adult with a basket on their bike, but I’m not sure I can live without one now. (Photo: Andrew Liszewski/Gizmodo)

The cabling for the brakes and shifter is routed through the inside of the bike’s frame so it's always out of the way. (Photo: Andrew Liszewski/Gizmodo)

Oversized tyres not only provide lots of grip, even in wet conditions, they also help to absorb bumps in the road for a surprisingly smooth ride. (Photo: Andrew Liszewski/Gizmodo)

These simple rubber strips help protect the Treadwell EQ’s paint job when you’re leaning it against something, which is especially useful as the bike doesn’t include a kickstand. (Photo: Andrew Liszewski/Gizmodo)

The use of skateboard grip tape instead of clips or serrated edges help keep regular shoes firmly perched on the Treadwell’s pedals without scraping up their soles. (Photo: Andrew Liszewski/Gizmodo)

There are lots of subtle design choices on the Treadwell EQ that only make themselves known as you ride the bike, but soon become appreciated. The bike’s “crooked” cross bar makes it easier to throw your leg over. Cables for the disc brakes and gear shift are routed inside the bike’s frame so they never catch on loose clothing or leave a grease smear. The tyres are thicker than what you’ll find on most road bikes, but provide lots of grip, even in the rain, and do a good job at absorbing bumps. Rubber strips along the crossbar allow you to lean it against a wall without damaging the paint finish. Instead of clips or serrated teeth, the EQ’s pedals feature grip tape so regular shoes won’t slip off. And the wide, padded saddle might be the most comfortable bike seat I’ve ever used.

It’s definitely a bike for the casual rider, but beginners probably won’t be able to assemble it themselves. Unlike the bikes you’ll find in a big box store, or even Ikea, you’ll want to find a cycle shop to put the Treadwell together for you. Mine didn’t include a printed assembly manual, and while I got some parts of the bike together on my own (screwing on the pedals was an easy step) others require special tools, like torque wrenches, so screws and bolts are properly tightened without damaging the frame. It cost me about £50 to have my local bike shop assemble and safety check the Treadwell EQ for me, which is an extra expense I highly recommend.

But given who Cannondale is targeting with the Treadwell line, I was also surprised to find it didn’t include a kickstand (most higher end bikes don’t) and came with just basic reflectors. Tossing in a pair of LED safety lights and a kickstand would probably be very much appreciated by the type of rider who’d be interested in the Treadwells: as I doubt they’d realise ahead of time that neither would be included. 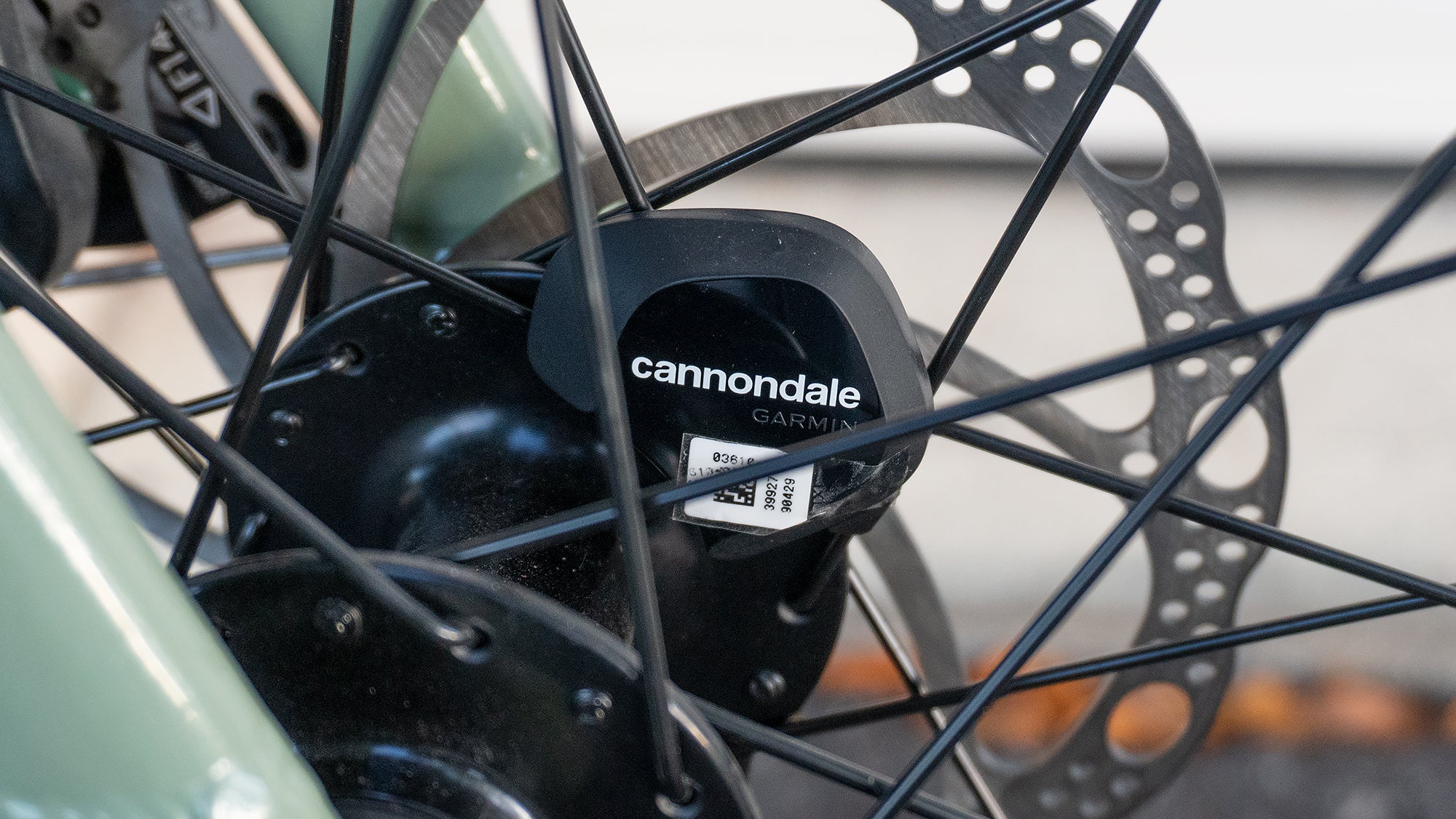 The Treadwell EQ includes a pre-installed sensor for tracking your rides, but you’ll need to supply a mobile device. (Photo: Andrew Liszewski/Gizmodo)

I found the lack of those basic accessories particularly confusing because Cannondale actually includes a wireless performance tracker – created by Garmin – built right into the Treadwell bikes. It’s an accessory you can get for most higher-end bikes, but Cannondale has made the EQ’s very easy to use as there’s no installation or calibration required. But, I will point out that during my initial tests I had a lot of trouble getting the sensor to do anything at all, which was incredibly frustrating. Thankfully, after Cannondale released an update to the iOS version of its app I was using for testing, the stat tracking has been very straightforward and reliable.

The Cannondale app can serve as a dashboard for the Treadwell EQ, providing real time info on your speed, distance, and even how many calories you’ve burned so far. (GIF: Andrew Liszewski/Gizmodo)

The app also keeps track of past rides, letting you see the routes you’ve ridden and your past performances, as well as keeping tabs on when you should be doing regular maintenance, or when it’s time to take it into the cycle shop for a tuneup.

Once the front tyre starts spinning, the Treadwell’s sensor immediately starts recording performance data like your speed, distance ridden, and how long you’ve been riding. Syncing it to the Cannondale app was painless, and after that, the Garmin sensor will automatically record your rides, and then sync it to your phone whenever it’s in range again. It all works seamlessly with no intervention required, unlike other cycling apps that require you to manually start and stop stat-tracking for a ride. You don’t necessarily have to even bring your smartphone with you, although the Cannondale app will take advantage of its GPS capabilities to also document the route you took.

The app isn’t impressively robust; hardcore cyclists won’t find any ways to do a deep dive on past rides compared to the most recent. But it provides more than enough details for casual riders, including how much fuel you’d save over driving in a car. And I like that Cannondale uses the data from the sensor to let riders know when it’s time for regular maintenance, like a tyre or brake check. 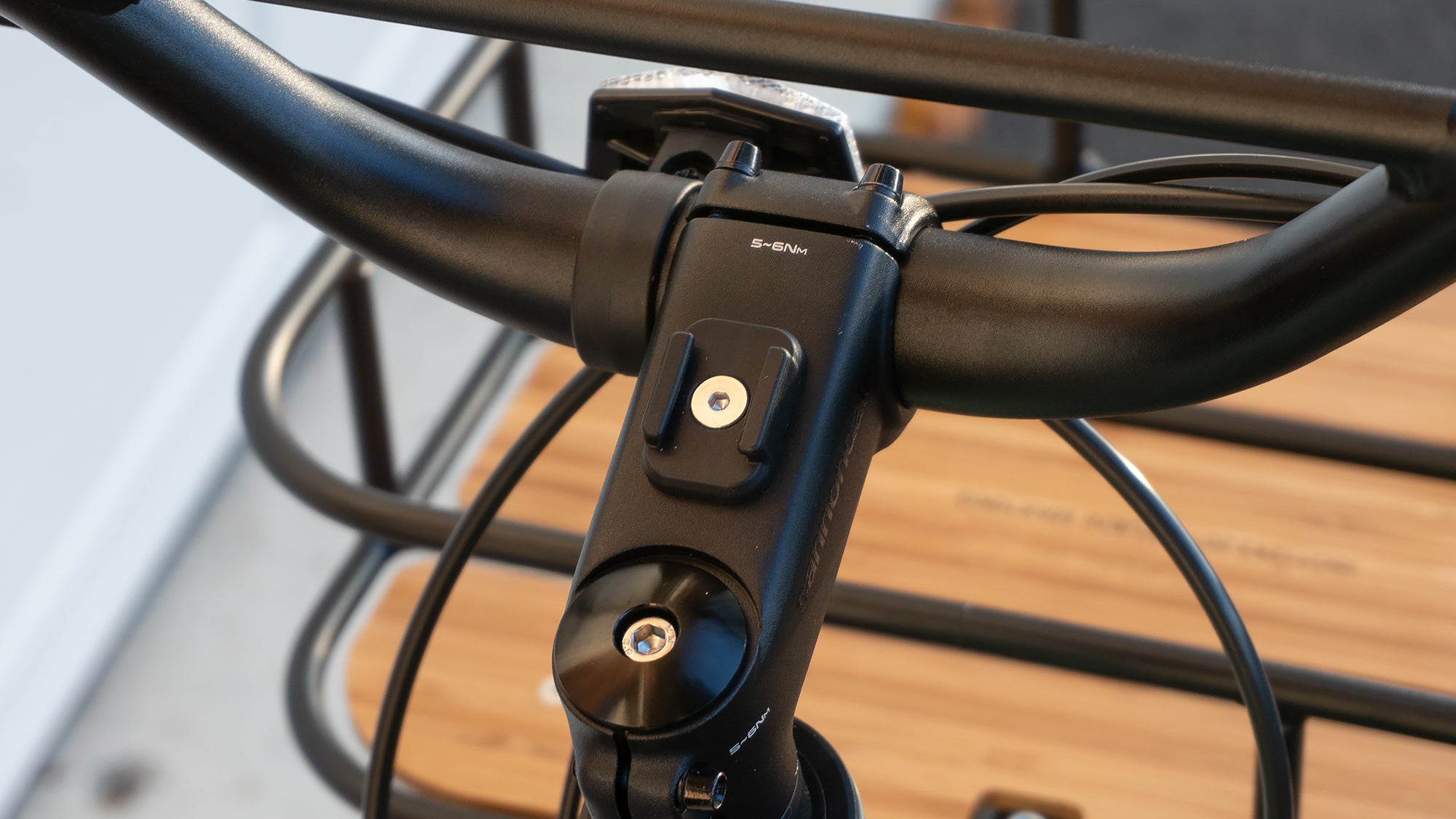 The built-in SP Connect mount allows you to use your smartphone as the bike’s digital dashboard, assuming you can get a compatible case for your device. (Photo: Andrew Liszewski/Gizmodo)

Cannondale has even included an SP Connect mount on the Treadwell EQ’s handlebar stem so you can use your smartphone as a dashboard that displays real-time info about your speed and distance while riding. However, you’ll have to cough up an extra £25 for a special SP connect smartphone case (it isn’t included) and while one was available for my iPhone 8, my Google Pixel 2 XL wasn’t supported. If it’s a feature you think you’d enjoy, there are lots of other smartphone bike mounting solutions out there.

You can get a perfectly functional bike from Argos for less than £150, so by comparison, Cannondale’s Treadwell line, which costs up to £800 for the EQ version we tested, is quite a bit more of an investment. But the company has taken its expertise in designing bikes for competition and created a ride that’s both accessible to any skill level, and functional for anything other than setting Olympic records – although the easy performance tracking makes me hopeful my Olympic dreams aren’t dashed yet. (They are.)