The City Enduring, the titanic Dyson swarm at the centre of writer N.K. Jemisin and artist Jamal Campbell’s upcoming series Far Sector, is more than just a makeshift planet that nearly 20 billion people call home. It’s an experiment trying to figure out how to successfully bring three races of warring aliens together in a peaceful, harmonious way following the devastation of each group’s respective societies.

When I spoke with Campbell recently about how he went about translating Jemisin’s ideas into visual information, he explained that it all really begins with his own deep understanding of the world the comic’s story takes place in. Because more than anything else, historical context is what really defines Far Sector’s characters.

It’s always been kind of odd that there are so many human Lanterns from Earth even though the galaxy’s an awfully large place, but obviously Jo’s distinct amongst her peers as Far Sector opens. In your mind, who is Jo in relation to the larger Lantern Corps?

Jamal Campbell: Jo...she’s assigned to this far sector of the universe where the Guardians simply don’t have jurisdiction and she’s sort of on her own patrolling the area. And that’s very different from the typical Green Lantern Corps where you have two people for each sector and they’re in constant contact with the Guardians and other Lanterns who they can call on when a job gets too big for one pair to handle. But Jo is very much on her own with this ring that she knows a little something about, but not much beyond the fact that it’s not really like other Lantern rings.

How much of the established Green Lantern history is Jo familiar with? She’s new to the job, but is she new in the sense that like she’s just stumbled into receiving her ring without knowing what it is? Or is she someone who has a general awareness of who and what the Green Lantern Corps is?

Campbell:  More of the latter. She’s kind of like the everyday person in the DC universe, where she’s seen Green Lanterns flying around and she knows at least one personally. But the way she’s inducted into the organisation...she doesn’t really get the proper orientation, let’s say. So she’s in this strange land with a strange power and she’s still getting together her ideas of what a Green Lantern should be. 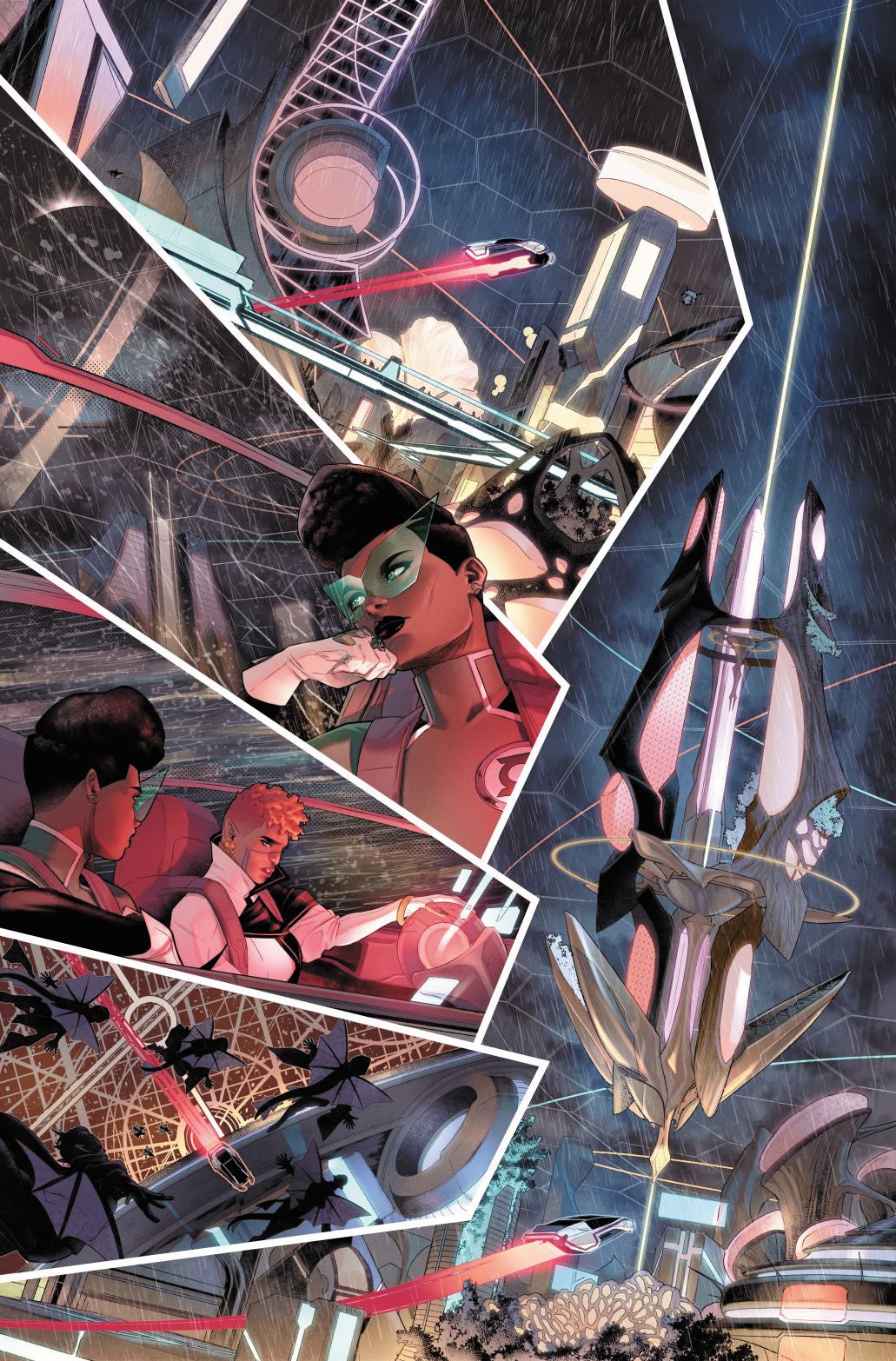 Jo making her way to an important meeting on the City Enduring. (Image: Jamal Campbell/DC Comics)

One of the major things that really jumps out from the first issue is how the aesthetic details of the City Enduring and its citizens speak to its larger history and the cultures the various races have developed living together. I’m curious about how you went about realising such a huge and complicated world, visually.

Campbell: I based a lot of what I came up with on Nora’s worldbuilding notes. When I came on, she had these huge documents about the different races that inhabit the City Enduring, their environments, their histories – everything. My job was to figure out how to convey all of that information visually and physically without, you know, a huge paragraph of descriptive text to get the important ideas across. So for example, one of the first places you’re introduced to is called Platform Ever Forward and it’s this cyberpunk megalopolis where all three races – the Nah, the @AT, and the keh-Topli – cohabitate. So I had to think to myself “what would a Nah building look like versus a building designed by the keh-Topli, and because this is all a densely-populated city, how do these spaces and structures interlock to form the larger environment where everyone lives?”

Talk to me about the interplay between the Nah, the @AT, and the keh-Topli. They’ve all lived and evolved together on this city, but there’s this clear imbalance of power, societally, that’s led to a really fascinating kind of stratification.

Campbell: It was really cool to spend time thinking about this – visually how do some of these people present themselves and what does their presentation say about the way they see themselves and others? Because there are some of the keh-Topli who choose not to conform as an act of protest. Because the Nah are the most powerful, I designed them to have the most humanoid silhouettes, but they’ve got wings, and tails, and seven digits on each finger. They’re almost human, but they’re not quite there. The keh-Topli are more plant-based, but they’re still carnivorous. In their natural states, they actually resemble pitcher plants, but because of social norms, they’ve learned to conform their bodies to resemble the Nah so that people are less inclined to see them as predators.

The @AT are essentially AI that have taken on lives of their own. Because they’re digital lifeforms, they don’t actually exist in the real world. They present themselves through holograms and hard light constructs which gave me a lot of space to play around. You have some @AT who are more grounded and resemble organic beings more or less, but you also have these outlandish, imaginative @ATs who’ll have floating, disconnect limbs or like eyes in places you wouldn’t expect. But at the same time, they’re at the lowest rung of society really and have the least power.

But we see a bit of how people, I guess, physically codeswitch in order to move through the City Enduring in different ways?

Campbell: Exactly. Because the Nah exist at the top of society, there are those out there who aspire to be like them. There’s a value in expressing your desire to conform and be accepted into that culture. But at the same time, you also have people who are fed up with that system and they embrace their natural, non-Nah-like appearance. When you see a keh-Topli that looks like a pitcher plant, you automatically know that they’re a person who’s bucking the system and not willing to conform to society’s expectations.

What was most creatively challenging for you, working on a book that’s so high concept and at times unmoored from our own reality?

Campbell: It sounds simple to say, but it really was designing the different species that populate this book because as an artist, there’s this pull to making everything “aesthetically pleasing” which normally means making things look like other things we, as humans, have a frame of reference for. But the things that always catch your eye are things that look out of the ordinary. Not just things that look like things we know, but truly wild, alien things.

The Nah are humanoid, but each of their hands has seven digits and there was always something in the back of my mind telling me “no, that looks completely wrong” because as an artist, I’ve just spent years learning how to draw hands specifically not like this. I felt that pull to “fix” the extra fingers, but whenever I felt it I knew that I was doing something right because it meant I was outside of my comfort zone and focusing on something so specifically alien that it made me uncomfortable. I realised that fighting that urge to draw what I knew is what was going to make this book special, because that feeling as if everything is strange and alien – that’s how Jo sees the world.