When New Horizons zipped past Pluto on 14 July 2015, the NASA spacecraft was only able to observe one side of the dwarf planet. Scientists have now reviewed data collected by New Horizons during its approach and as it travelled away, resulting in the most detailed analysis yet of Pluto’s elusive far side.

Using its two onboard cameras – the Long Range Reconnaissance Imager (LORRI) and the Multispectral Visible Imaging Camera (MVIC) – New Horizons was able to capture spectacular images of Pluto’s so-called “near side,” or encounter hemisphere, revealing features such as mountain ranges, impact craters, and expansive plains filled with frozen nitrogen.

As for close-up images of Pluto’s “far side,” or non-contact hemisphere, those never came, as New Horizons zoomed off into deep space at speeds reaching 50,700 kilometres per hour (31,500 miles per hour). It takes Pluto a little more than six Earth days to complete a full rotation, so New Horizons was long gone before the far side made itself visible to the probe. 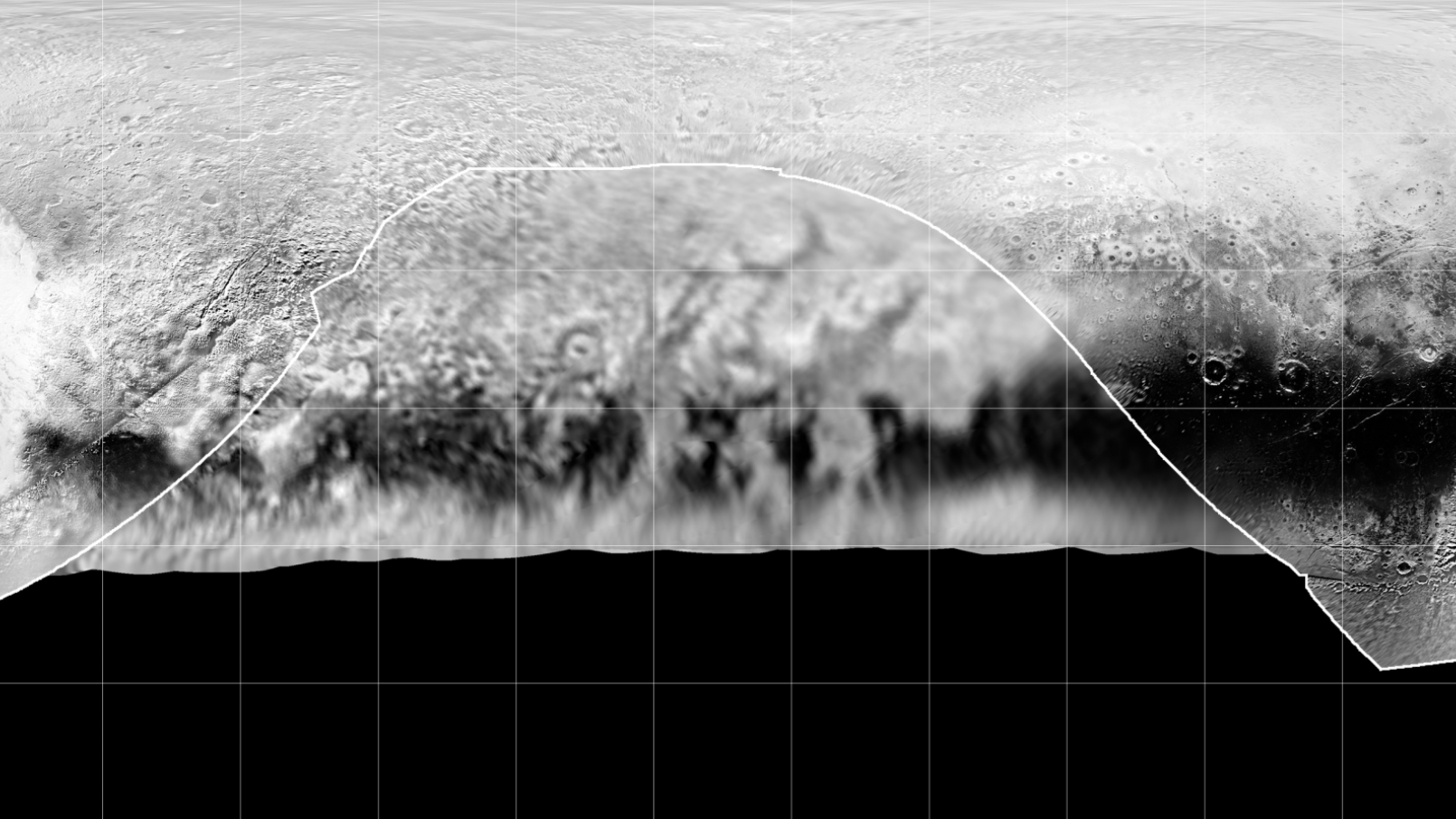 Updated map of Pluto showing the far side (the region below the white line). Areas in black could not be imaged by New Horizons. (Image: NASA/New Horizons/S. A. Stern et al., 2019)

That said, the spacecraft was able to capture images and take measurements as it approached Pluto, when it was still several million kilometres away from the dwarf planet.

“It was of course frustrating,” Paul Schenk, an astronomer with the Lunar and Planetary Institute and a co-author of the new research, wrote in an email to Gizmodo. “We could not get a good look at the other side of Pluto when we flew by so quickly in 2015, but we did get images on approach.”

The new study, posted to the arXiv this past weekend, presents the first compilation of that lower-resolution New Horizons data, while also offering the first geological analysis of that data set. In a phone interview with Gizmodo, Alan Stern, a planetary scientist from the Southwest Research Institute and first author of the new paper, said his team was motivated to review this “lower priority data” to “put together the best possible maps of Pluto’s far side.” The team plans to submit its new paper to the science journal Icarus for peer review.

Importantly, New Horizons also managed to snap images of Pluto as it eclipsed the Sun, revealing the dwarf planet’s limb, or edge, as seen from that particular angle.

“It has been fascinating to put together some of the pieces of that puzzle using all the different data sets that New Horizons acquired,” said Schenk. “For example, the haze layer surrounding Pluto allows us to see the edge of the planet in these areas in profile. This has been key to determining where the smoother and more rugged areas are in the poorly resolved areas of Pluto, and we can extend our understanding into these zones.”

Oliver White, a co-author of the study and a planetary scientist at the SETI Institute, said the scale of the images taken of the far side “ranges from kilometres per pixel to tens of kilometres per pixel,” and that at this scale, “variations in surface brightness are the best indicator of variations in surface geology, so in this sense the mosaic can be said to be ‘higher quality’ than what we had before,” he told Gizmodo, adding that it was essential for the geological mapping shown in the paper.

The new analysis revealed a distinctive hemispheric dichotomy on Pluto, in which its two sides feature contrasting geological and topographical features. The same can be said for our Moon, in which the near side’s lunar mares – large, dark basaltic plains formed by ancient volcanoes – are largely absent on the far side.

In terms of Pluto’s hemispheric dichotomy, the dwarf planet’s near side (referring to the side that was facing New Horizons when it passed) is dominated by a large heart-shaped feature known as Sputnik Planitia – a bright, ice-covered basin composed primarily of frozen nitrogen. Pluto’s “opposite side doesn’t have the equivalent phenomena,” said Stern.

New Horizons also revealed a bizarre and previously unseen feature along the near side’s easternmost regions: skyscraper-sized shards of ice. Called “bladed terrains,” these structures are composed mainly of methane ice, and they can reach heights of 300 metres (1,000 feet) or more. Scientists have never seen anything like this before, but these bladed terrains appear to be widespread on Pluto’s far side.

“As it turns out, these bladed terrains are very common across half the planet,” said Stern.

Stern and his colleagues also documented a region on the far side characterised by dark blotches and intersecting lines. It just so happens that Sputnik Planitia is in antipodal position to this region, meaning it’s located directly on the opposite side. Sputnik Planitia is very possibly an impact basin that formed from a massive collision with a large object – a collision that could have sent shockwaves through Pluto to the other side. Accordingly, Sputnik Planitia and the dark, linear features on the far side may be connected by this impact event. Astronomers have observed this phenomenon elsewhere, such as on Mercury.

Stern said these new results have left him wanting more.

“The data we interpreted was 100 times better than the imagery of Pluto we had before the flyby, but they’re also 20 times worse than the data we have for the near side,” Stern told Gizmodo, adding that the images are quite blurry. “This makes us yearn to see that far side, and we wish we could see it better to learn what these places are all about.”

Stern said the new paper is making a strong case for a new mission to Pluto, specifically an orbiter to study the far side. To that end, the Southwest Research Institute recently spent “half a million dollars” to investigate this possibility, and there’s now “plenty of talk in the scientific community” to further study Pluto with NASA funds, according to Stern.

“This paper is kind of intended to be THE paper on Pluto’s far side using New Horizons data,” White said. “I think we’ve squeezed pretty much everything out of the data that’s available to us, so only data from a future mission to Pluto that resolves the far side – indeed, all of Pluto’s surface – to a better degree will really allow us to meaningfully refine our ideas.”

A return mission to Pluto would definitely be amazing. This ex-planet is turning out to be far more fascinating than we could have ever imagined.