Spooky times are back, and you know what that means: ‘Tis the season for bad Halloween costumes! Cosplay and nerd culture have become more mainstream and while that means some awesome costumes, so too do we see an increase in badly made knockoffs. Some of them are supposed to be “sexy,” others funny, but they usually end up just being plain bad. We’re looking at the worst of the worst of 2019.

I said this last year, but it bears repeating: This is not about defining what constitutes a good or bad “sexy” costume. Halloween is a great time to celebrate your sexuality and have fun with fashion – as is any time of year, for that matter. Rather, we’re here to look at the ridiculous, the laughable, and the offensive. In other words, the best of the worst borderline copyright infringement that the folks at Yandy, ForPlay, and beyond have bestowed on us for this year’s All Hallow’s Eve. 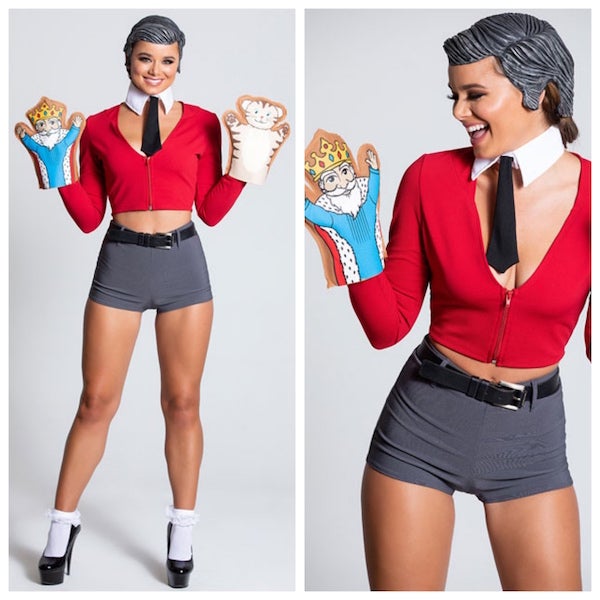 Much in the vein of that Bob Ross aka “Happy Tree Painter” costume, Yandy has decided to sexify Mister Rogers’ Neighborhood with “Nicest Neighbour” (Yandy), complete with a red belly sweater, shorts, and a stiff necktie that isn’t even attached to a shirt (puppets not included). Excuse me, but Fred Rogers was already sexy enough on his own. 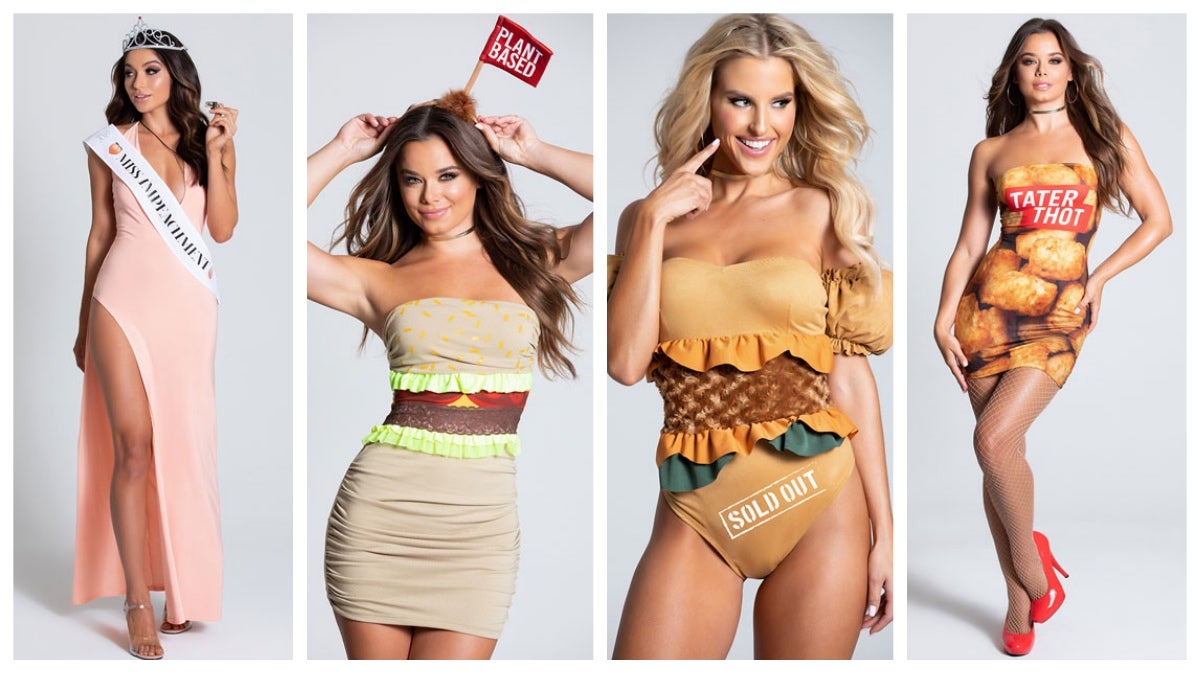 That’s right, we’re back with another round of oh-so-topical Halloween costumes! After all, “Sexy Op-Ed Anonymous” is soooo 2018. This year, it was mostly food-related costumes – I’m guessing because we all stuffed our faces to try and survive this horrible year. We’ve got “Beyond Burger” (Yandy) and “Sold Out Chicken Sandwich” (Yandy), along with a delightful pun stuck on a disappointing costume with “Tater Thot” (Yandy). But if you still want to get political, we’ve got “Miss Impeachment” (Yandy) a tribute to...nice bums and systemic justice? 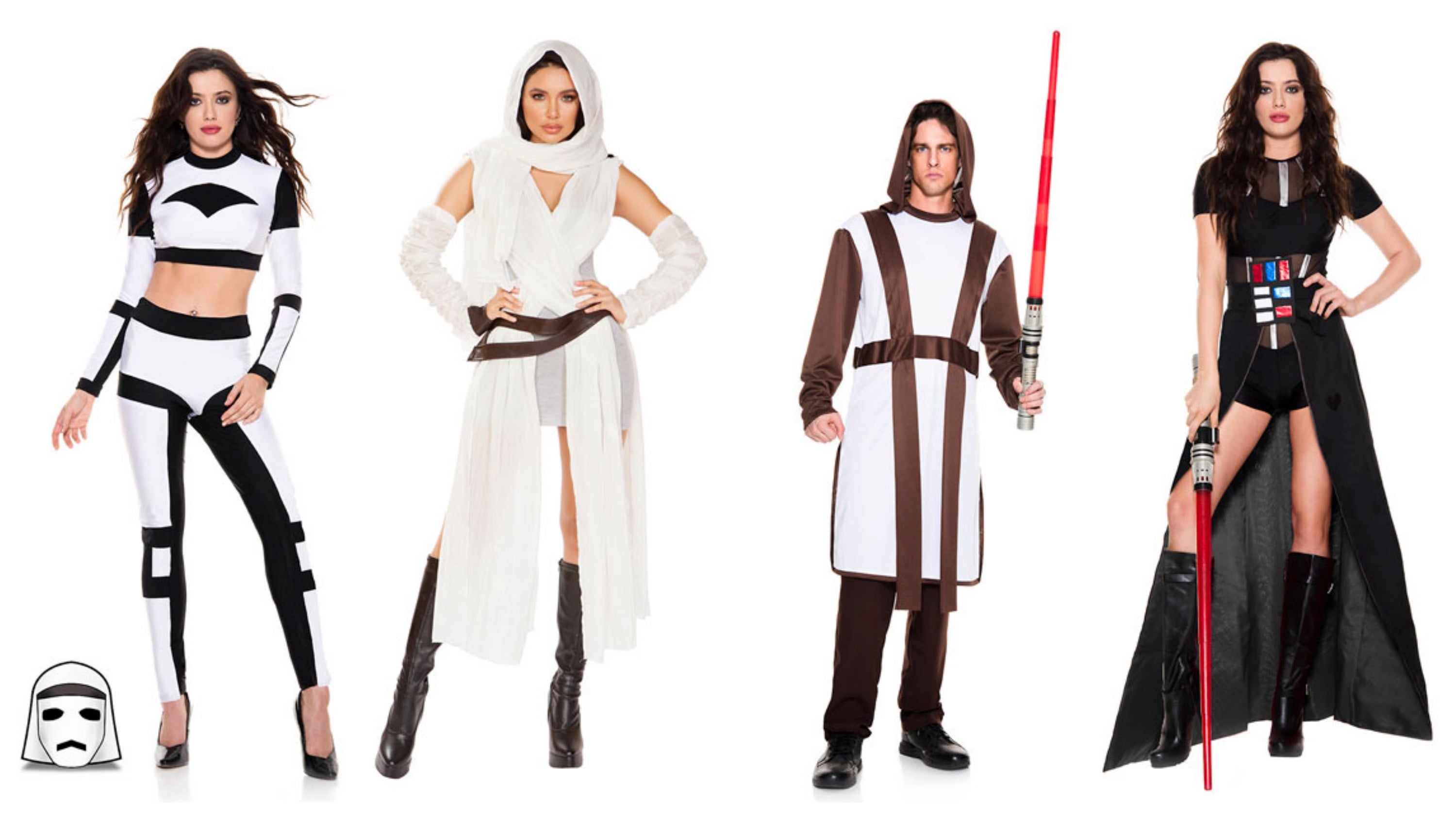 The Skywalker saga is finally coming to an end this year with Star Wars: The Rise of Skywalker. Why not celebrate with the finest pieces of borderline copyright infringement with these totally-not-Star Wars Halloween costumes? The “Galaxy Trooper” (Yandy) outfit looks all right enough, were it not for it having the solar system’s worst fake helmet. Then there’s “Human Space Scavenger” (Yandy) – not to be confused with all those non-human ones – as well as the absolutely ridiculous “Universe Warrior” (Yandy).

All of that said, I’m kind of digging the fake Darth Vader costume... except for the fact that it looks cheap as hell and it’s called “Dark Star Lady” (Yandy). Like, come on, that’s just silly. 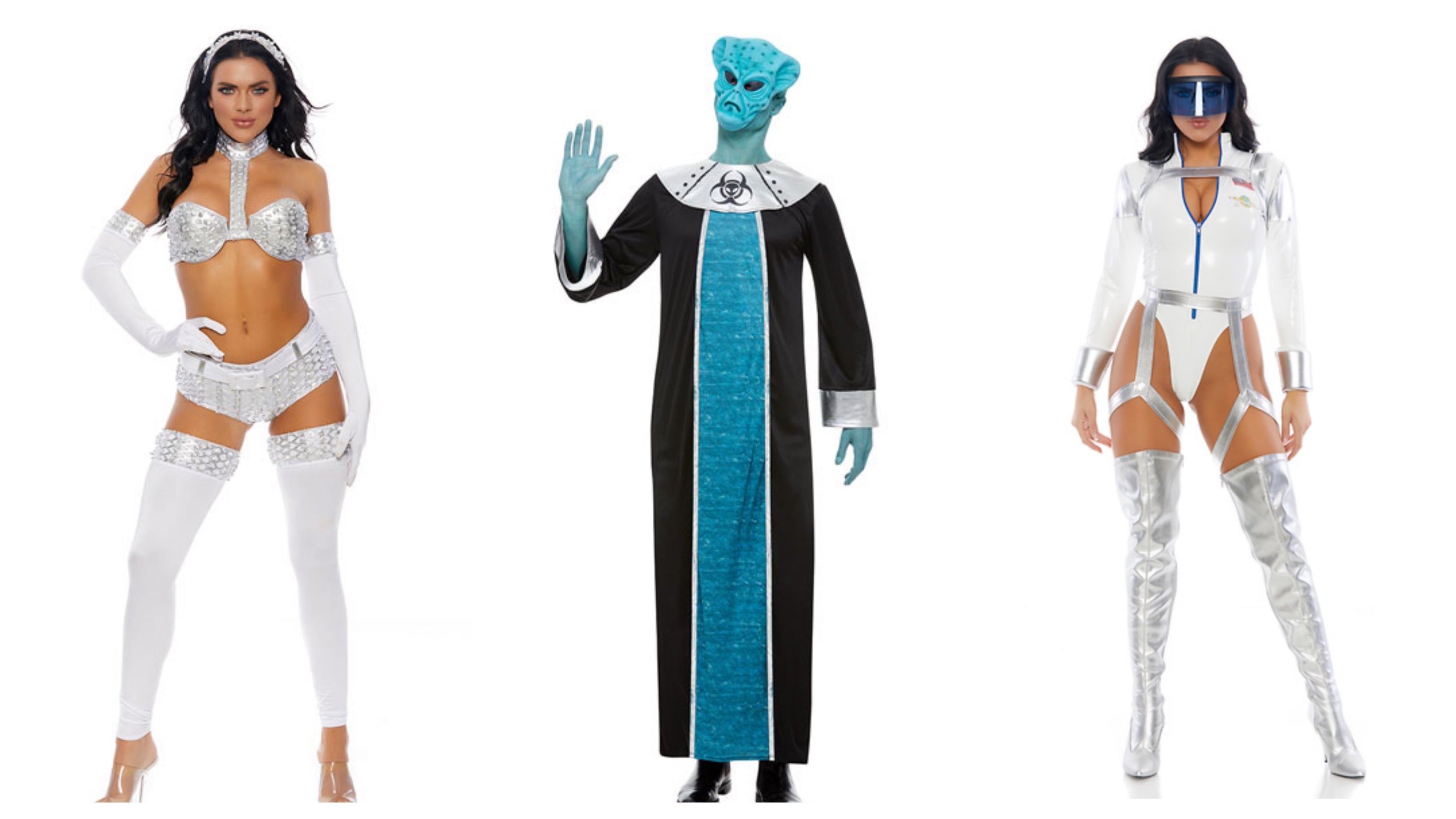 There were enough fake Star Wars costumes to warrant their own category, but I still had a few extra spacey outfits that simply had to be mentioned. You can be a possibly radioactive weirdo with “I’m Blue Alien” (Yandy). Then there’s “Blast Off” (ForPlay), an astronaut costume that says it’s based on a “movie character” but for the life in me I can’t figure out which one. The one on the left is called “Future Is Female” (Yandy) and it made me want to die. 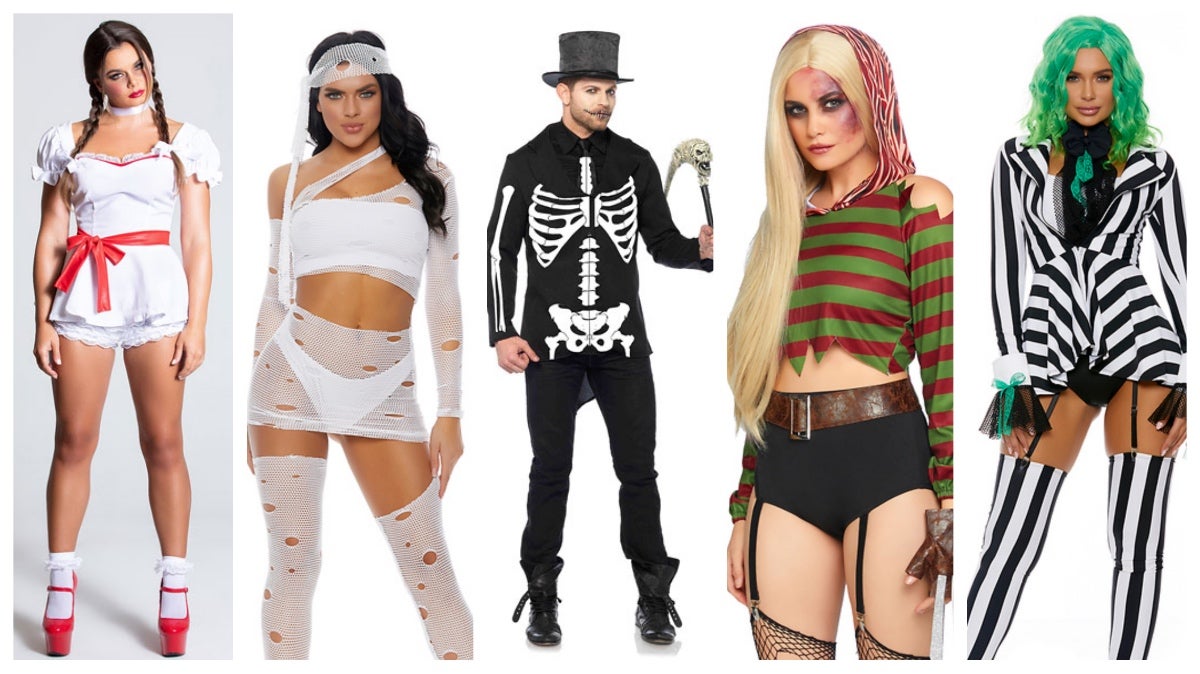 Scary (But Not Really)

It’s time to get spoooooooky! Except no, not really. “It’s a Wrap” (ForPlay) handled the mummy game while “Got the Juice” (ForPlay) channelled not-Beetlejuice...except both of them are wearing these weird half-trousers that can’t look or feel good after walking around all night. “Dream Killer” (ForPlay) is overall bad but gets a pass for having a creepy meat skin hoodie. Then, for those wanting to be creepy in completely uncomfortable ways, there’s the sexified Annabelle of “Defiant Doll” (Yandy).

Finally, there’s the bone guy. A big trend in costumes this year is folks dressing up like skeletons. No surprise, it’s a universally flattering look and really brings out the inner self (get it?). That doesn’t mean all the costumes are good, though. There are plenty of bad skeleton looks. But I have to be honest: The main reason I picked this one is because it’s called “Bone Daddy” (Leg Avenue) and I just couldn’t help myself. 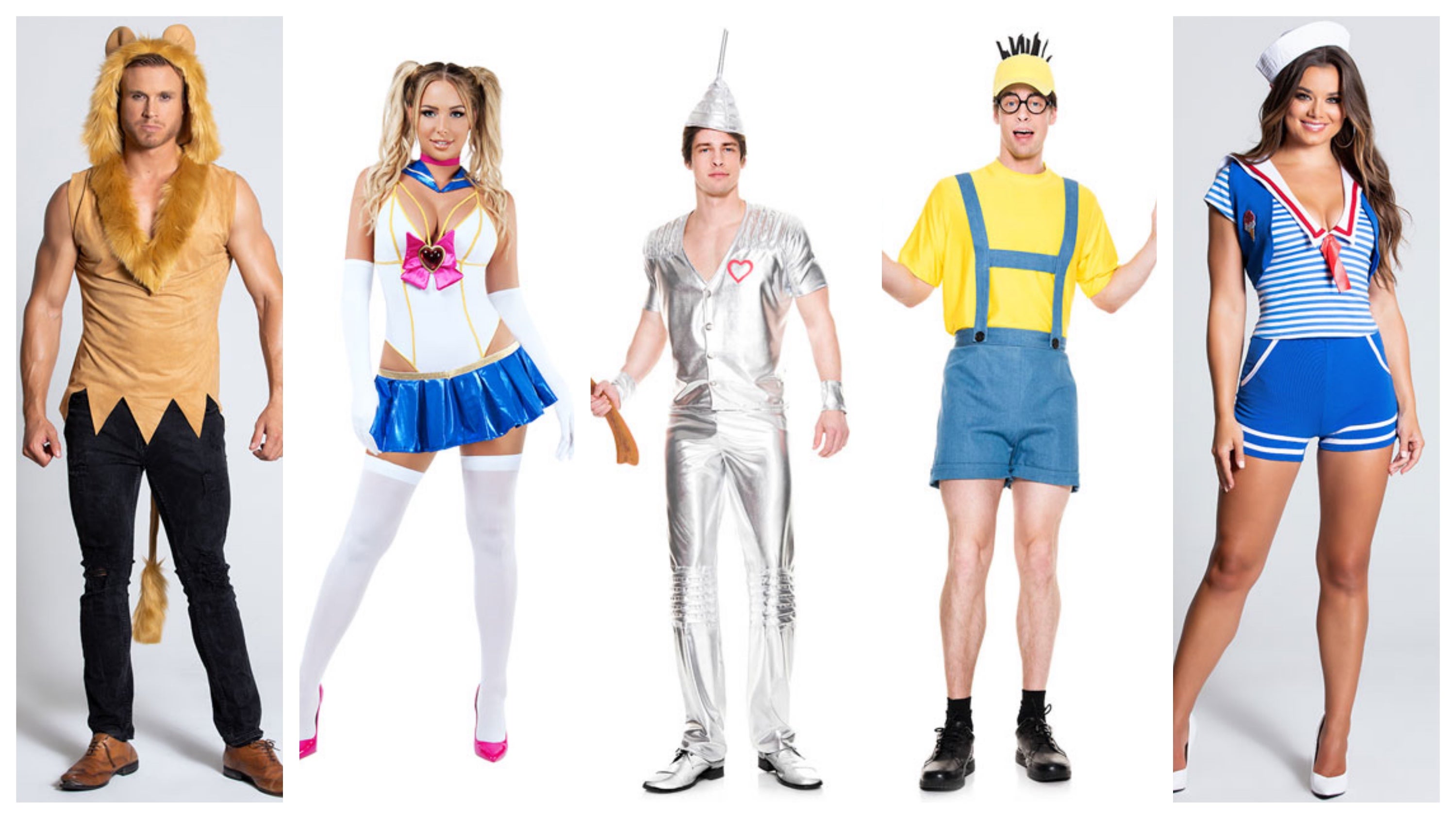 Cute (But Not Really)

This one is a bit of a hodge-podge, but it’s mostly things that are normally designed to look cute but in this case, are anything but. The Wizard of Oz hath returned (following ForPlay’s 2018 costume set) with “Hear Me Roar” (Yandy) and “Heartless Tin” (Yandy) – although I couldn’t find a sexy male Dorothy anywhere! Otherwise, there’s the childhood-ruining “Despicable Human” (Yandy) or “Anime School Girl” (Starline) which is making choices with the Sailor Moon-inspired getup. Finally, the cosplay of the year with Stranger Things’ sailor suit, this time going by “Scary Scoops” (Yandy). After all, nothing is scarier than minimum wage. 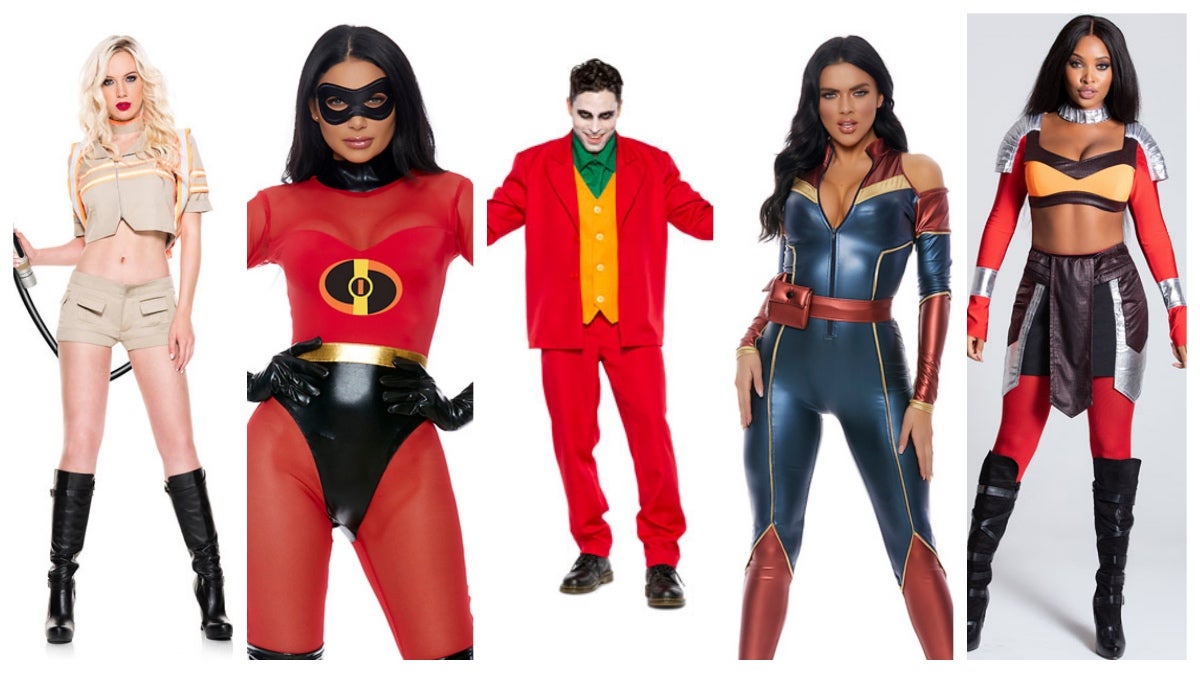 Most of these costumes are to be expected. The Ghostbusters “Ghost Hunter” (Yandy), the Captain Marvel “Space Soldier” (ForPlay), and Black Panther’s “Femme Fatal Warrior” (Yandy)... complete with a truly terrible name. Even the weird mesh “Super Suit” (Yandy) that turns The Incredibles into some seriously kinky shit. But I just wanted to point out one thing: “Vile Villain” (Yandy), the newest incarnation of the Joker ensemble, costs $72 (£56). How? And why? Just go to the charity shop, folks. You can find all the ill-fitting suit components you want there. 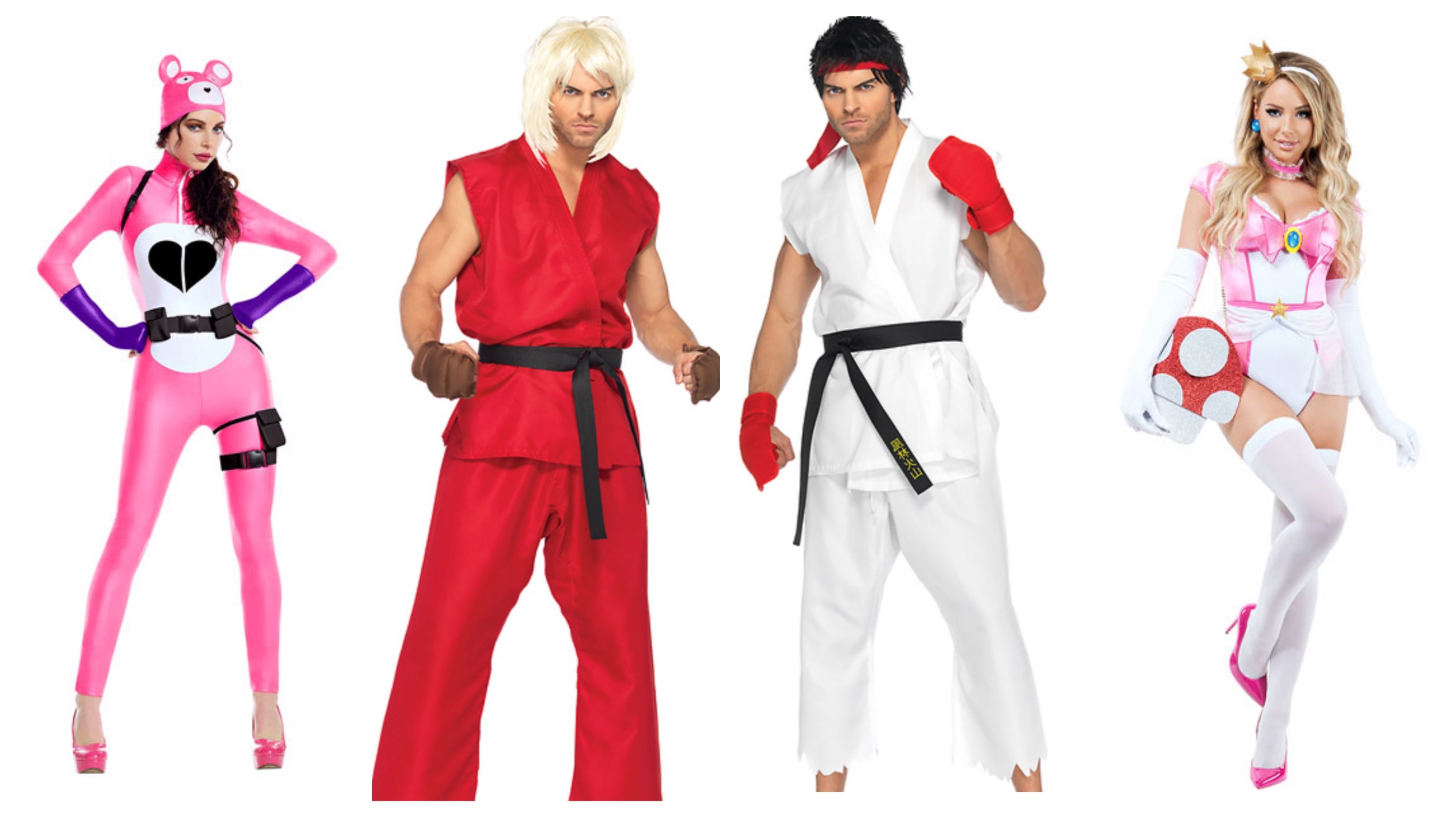 Shout-out to my gamer squad!!! We’ve got the “Cuddle Dream Gamer” (Starline) and our favorite “Mushroom Damsel” (Starline). And then, the Street Fighter duo themselves, Ryu (ForPlay) and Ken (ForPlay). Hint hint: Best couples costume ever, maybe? 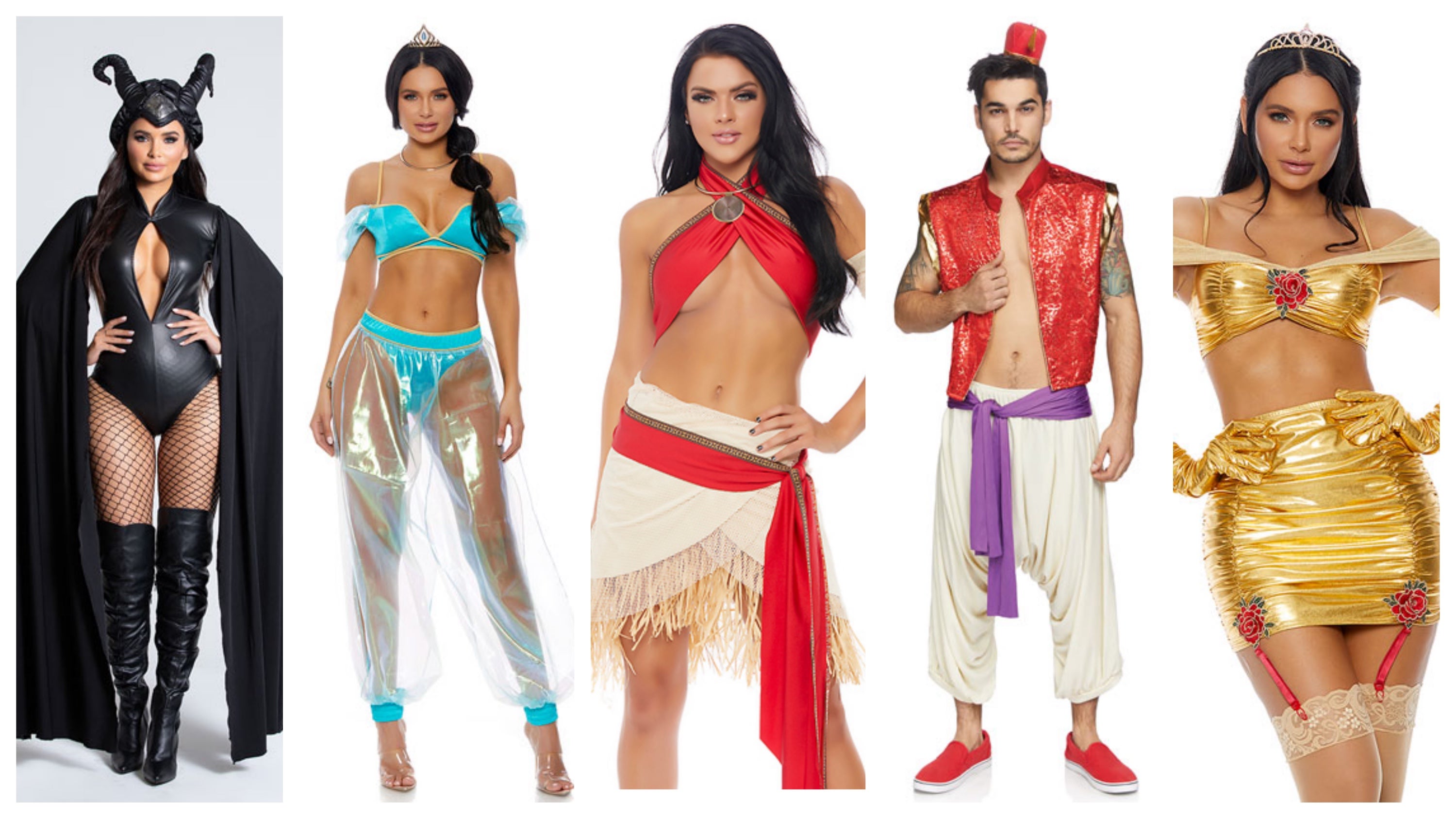 Why is it that fake Disney costumes are always the worst? “Vengeful Creature” (Yandy) looks like she has a bag of poo on her head, while “Desert Prince” (Leg Avenue) might as well be carrying a load around in those pants. You’ve got “A Whole New World” (Yandy) donning a shower curtain on her legs and “Beautiful Belle” (Yandy) in a weird crimp skirt that I can’t imagine looks good on anyone. But I’m especially weirded out by “Island Princess” (ForPlay) Moana was, like, definitively underage. I don’t want to see Moana’s underboobs. 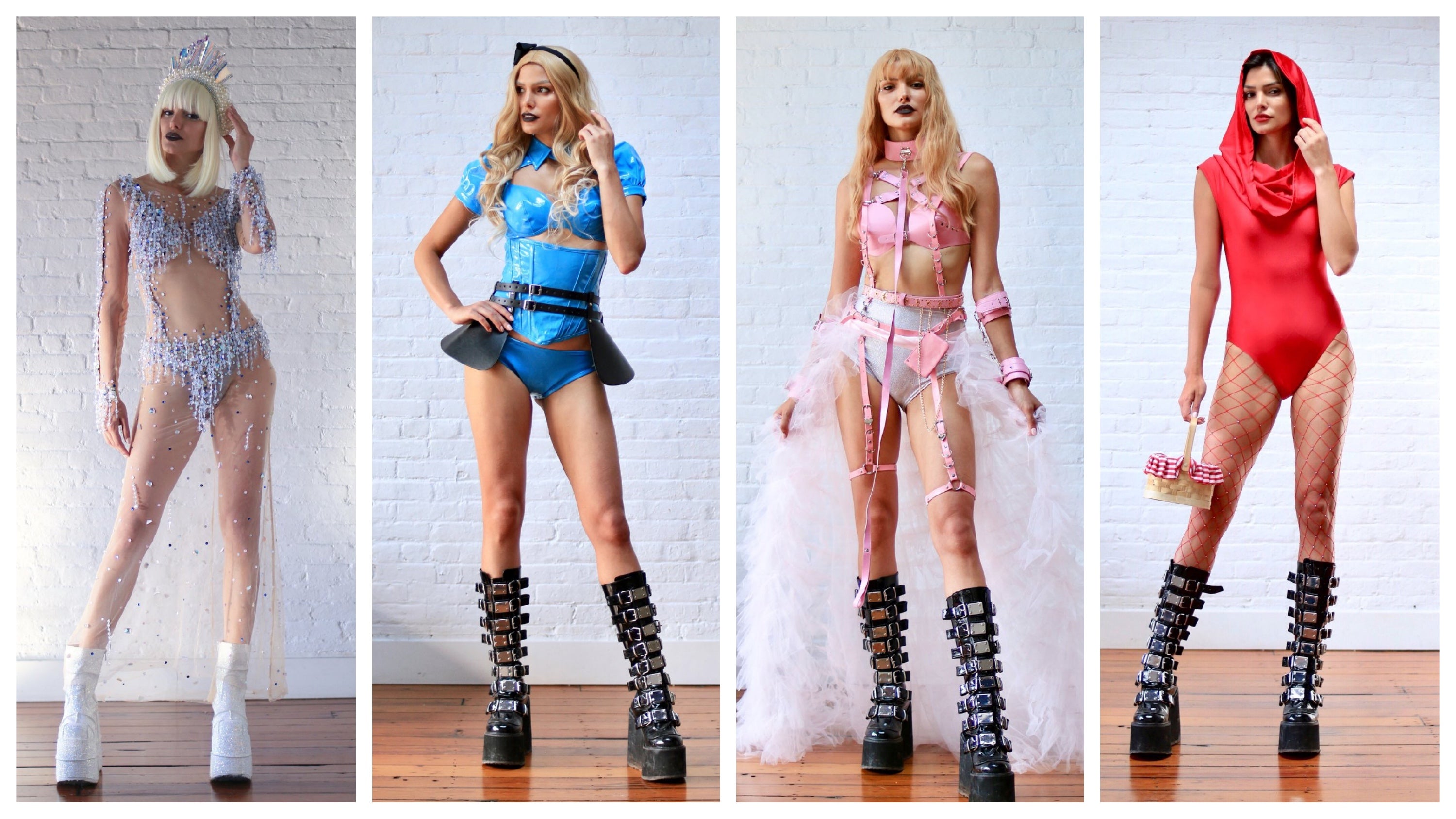 These costumes come from Harmonia, a site that normally specialises in outfits to wear to Burning Man or Coachella. So it’s no surprise that these costumes, which tend to go for hundreds of dollars, feel like they’d be more at home in a fancy rave than at your friend’s Halloween party. On one hand, they’re clearly well made. On the other, they’re making some weird choices. 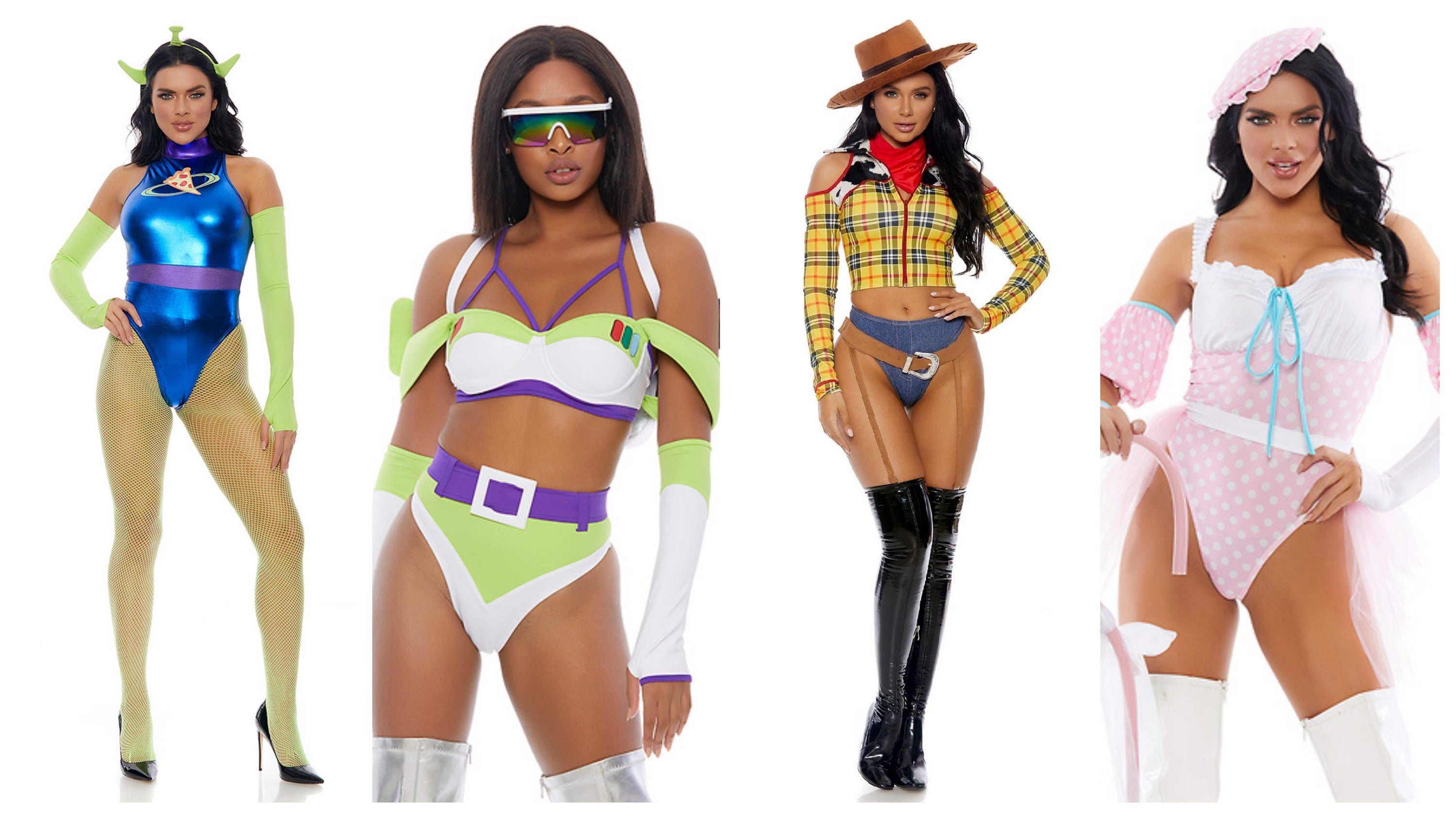 Totally Not Disney Trust Us You Guys (Also WTF)

So, these exist now. All ForPlay.