Here's the Internet's 'Birth Certificate' From 50 Years Ago

Fifty years ago Tuesday, on 29 October 1969, the internet was born. It was a humble beginning – a single login from a computer terminal at UCLA in Los Angeles to the Stanford Research Institute (SRI) in the US state of California's Bay Area. But it was a tiny baby step that would eventually catapult the world into the information age.

Amazingly, we actually have a piece of paper that documents that important moment for the internet, first called the Arpanet because it was a project funded by ARPA. Today you probably know ARPA better by the name DARPA, the government agency that’s working on bleeding edge tech like warfighting robots and brain implants.

The computer terminal operators who were working at UCLA in 1969 kept a detailed logbook of everything that was happening as they set up their network. And in a notebook entry for "29 Oct 69" we can see a particularly important notation at 22:30 (10:30 pm): “Talked to SRI, Host to Host.”

That sheet of paper, which currently sits at the archives of UCLA, is more or less the internet’s birth certificate – a written record of that moment when the two host computers at UCLA and SRI started communicating. 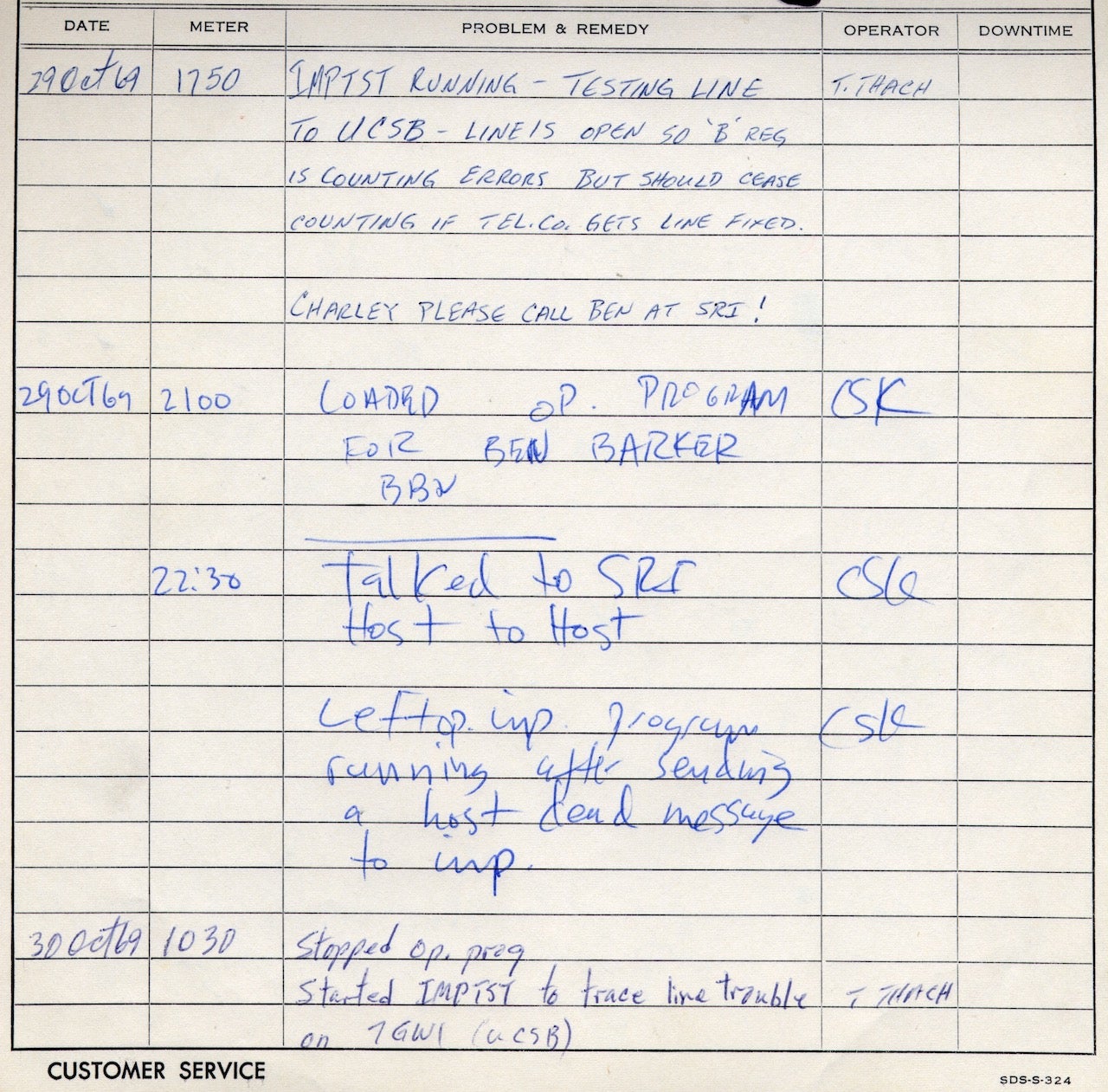 I chatted over the text with Bradley Fidler, a historian of computing at the Stevens Institute in the US state of New Jersey, where he works on contemporary issues relating to the technical management of the internet. Dr Fidler told me about why the document is important and how it fits into the grand scheme of better understanding networking history.

I should probably note that I only realised halfway through our text conversation that Dr Fidler was on a plane to Los Angeles, a city that was experiencing a terrifying fire near UCLA’s campus in Westwood. The last question only makes sense with that context.

Gizmodo: What makes this document so special?

Dr Fidler: If you tell people what it actually is, they won’t think it’s special. It documents, precisely, the first remote login (not message) between two computers (they’d tested the line with terminals beforehand) over the first deployed (not first designed; that was at least a tie with the UK), general-purpose computer network (not the first computer network; there were many by this point, and shortly thereafter) which was largely (not entirely) packet-switched. The network software that gave the dissimilar machines a way to speak with each other over the packet switches wasn’t finished, so they weren’t using a completed network by any stretch.

But the document is special, as far as documents go, because it documents the first successful test of the main purpose of the Arpanet: remote access for any reason (e.g. the user could run any application) between different kinds of computers, utilising a highly experimental technology called packet switching, which permitted more distributed forms of networks. This matters because it sets in motion a small piece of the global history of networks, one which grew and extinguished a lot of alternate paths. It set in motion traditions, designs, institutions which were not replaced but morphed into what we live under today. So technical details, like how the Internet uses names, addresses, and applications, and institutional details, like how the Internet is managed. DARPA-funded researchers then tested internetworking technologies – that would allow the interconnection of networks – over the Arpanet, and a decade after the first connection, in 1979, the Arpanet was the Internet’s first and only backbone, a role it maintained until 1986. Even though the underlying structure of the Internet is supposed to be invisible, its design sets the conditions and limits on how we can connect, how we can be monitored, how it can be secured, etc. So for the same reason that some remaining segments of society would want to explain the causal forces behind historical phenomena that shape our world today, those segments would care about this too.

Gizmodo: How did you learn about this document?

Dr Fidler: I was a doctoral student with UCLA History, procrastinating on some Western Civ grading I believe, and got talking with Len Kleinrock about Internet history; he removed this document from his filing cabinet to show me. As a professionally trained historian, I was like, sweet, this rules. Later on, I suggested that he let me archive it with the UCLA Special Collections, along with other materials from him and from that period.

Gizmodo: Are there any documents in the history of tech that are other “birth certificates” worth studying?

Dr Fidler: The Arpanet has a bunch. There’s ARPA getting its Command and Control Research Portfolio from the White House, ARPA’s Request For Quotations that set out some basic designs and asked for bids; the response by Bolt Beranek and Newman Inc.; their first full specification after they were awarded the contract in 1968; the first Request For Comments document that began to design the network software run in the hosts; the logbook, in particular, also documents how staff sent simple teletype (e.g. terminal) messages between UCLA and SRI before connecting the hosts. Those are just a few off the top of this red-eye flight. And you can keep going forward toward the Internet.

The point is if you really want to piece together a history from documents, get enough of them. Ask what had to have been accomplished for that particular document to have been made possible. Ask about the obvious stars and the hidden labour. Ask why the authors make a really big deal about [a] thing that might seem obvious to you but [doesn’t] even mention things you think to be exciting. Try to figure out what they saw themselves doing – it was [certainly different] from how you see it. Do that enough times with enough documents and you’ll start to construct a reasonable history.

That said it’s also easy to get antiquarian about things and forget that the Internet of today is different: its underlying design is very similar (we’ve just been adding pieces and haven’t changed it fundamentally in a long time), but its purpose is radically different. That’s because of the context in which it operates, and the purposes for which it is put to use. The old Internet and Arpanet that we celebrate was a US Defense Department project that tested its use scenarios in a place it didn’t really matter to military operational readiness: unclassified research settings, grad students, etc. And we should celebrate that, with a clear-eyed recognition of the place of military funding and its contributions to American society. Today, the Internet is a commercial entity and its new founding texts originate with Facebook, Google, Tencent, and the like.

Gizmodo: Are you currently on fire?

Dr Fidler: Before I get into a discussion as to whether or not I am currently on fire, I want to clarify that I’m going to give it a good hustle, that the fire is a metaphor for some kind of divine punishment, meted out by the gods we know we serve or don’t, and that I’m going to stay positive and keep my head in the game.