How the 10-Year Wait for Zombieland: Double Tap Changed Everything

By A Kennedy on at

If a Zombieland sequel had come out less than 10 years after the original film, it would have been a very different movie, in terms of story but also quality. Over time people get older, Hollywood’s sensibilities change, and maybe some of your once up-and-coming actors win Oscars. A lot can happen in 10 years, and all of it worked to make Zombieland: Double Tap the film it is today.

The sequel to the 2009 Ruben Fleischer film is set roughly in real-time since the first one and once again follows the unlikely “family” of Tallahassee (Woody Harrelson), Columbus (Jesse Eisenberg), Wichita (Emma Stone), and Little Rock (Abigail Breslin) as they fight zombies and survive in post-apocalyptic America. However, while things look harmonious on the surface, Little Rock is now a young woman and she has a strong desire to go out on her own. When she does, the rest of the gang sets off after her.

That’s the super basic set up for Double Tap. And it’s completely different from what writers Rhett Reese and Paul Wernick originally planned.

“Originally we wrote Zombieland 2 to happen the day after Zombieland 1,” Reese told us last week in Los Angeles. “Abigail Breslin was [still] a 12-year-old girl. So, over time, we had to literally abandon that entire concept and make it about her fleeing the nest because she grew up.”

However, during that time Wernick and Reese got kind of busy. They wrote two movies about a character named Deadpool. Anyone heard of him? As a result, several other writers were brought in to clean things up. 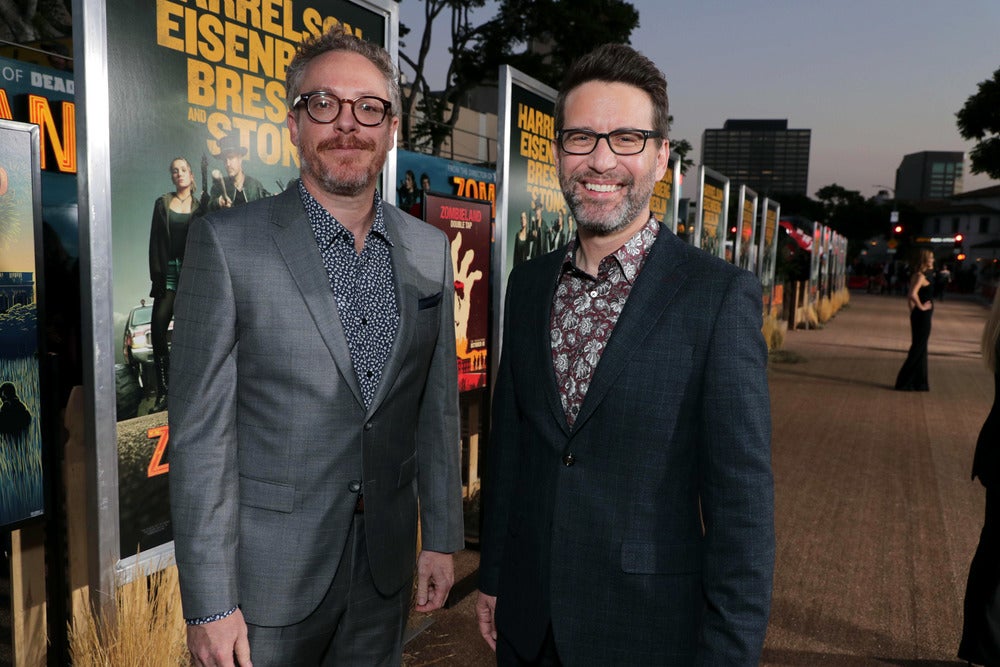 Paul Wernick and Rhett Reese, writers of the Zombieland and Deadpool movies, at the Double Tap premiere. (Photo: Sony Pictures)

“Dave Callaham and Oren Uziel came in and did a wonderful job kind of updating the story bringing it to a more of an empty nest story about a young woman who used to be a girl, and used to love to look up to her father figure, but now really wants to get out in the world,” Reese said. “Then the three of them having to chase her down and it really clicked into place for us. We thought ‘Okay, now you really can justify the passage of time. You let her grow up and then you let her want to rebel.’”

If you ask Ruben Fleischer, who made his directorial debut with Zombieland and is now back for Zombieland: Double Tap, it was Reese and Wernick who were kind of responsible for the movie taking so long to make.

“They were unavailable when we first started working on it,” Fleischer said. “We worked with a really amazing writer, Dave Callaham, and then some other people did different drafts of the script. But the cast was very precious about the original and I shared their belief. If we were going to do it, we had to go in with full confidence that we could make it as good as the first one. And so that all comes down to the script.”

Fleischer says it was Wernick and Reese’s return to the film after Deadpooling around that really set the movie in motion. “I think it was really only when Rhett and Paul did a draft, and then they had to do more than one draft, but when we all read that draft and we all collectively felt [it] was going to give us the best chance for success, that’s when it all became very real.” 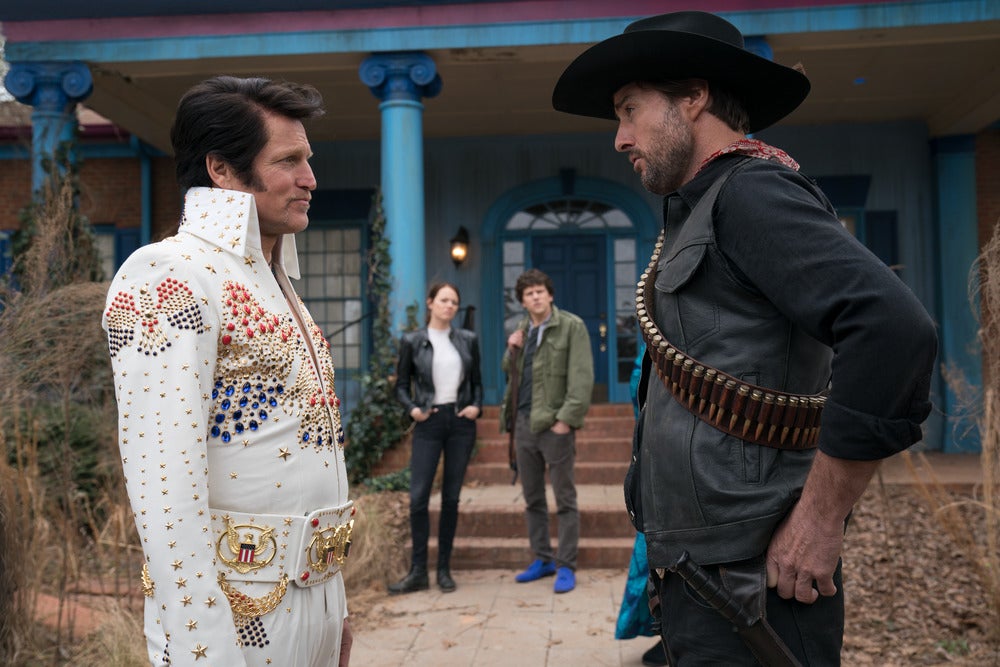 Woody Harrelson may have met his match in a new character played by Luke Wilson. (Photo: Sony Pictures)

Reese and Wernick, though, tell that story from a different perspective.

“Well, it was Woody,” Reese said when asked what ultimately jumpstarted Zombieland: Double Tap after almost a decade. “[The writing] was sort of a long process but a lot of it was bouncing back and forth with Woody. He was a little, I wouldn’t say reluctant, he was just nervous, as we all were, that this was gonna be something that could live up [to the original].”

“He really was sort of difficult to convince, in a good way,” Reese continued. “He just didn’t want to make something that he felt was either, not half-assed, but just not as good as the first.” “Nor did we,” added Wernick.

So while on the set of Deadpool 2, Wernick and Reese got an enthusiastic e-mail from Harrelson that changed everything. “We got the e-mail and all of a sudden I was like ‘We’re making this,’” Reese said. “And then, of course, we got the confirmation from Emma and Jesse and they felt the same way and suddenly that just unlocked it. It felt like he was sort of the last person to really just put that stamp of approval on it.”

The way the writers tell it, even for Stone and Eisenberg – who each got Oscar nominations since the first Zombieland (with Stone winning one) – Double Tap was always about Harrelson.

“Woody’s a little bit of the elder statesman on this one. He’s the reason this got made the first time,” Reese said. “So I still felt like even 10 years later...look at Emma Stone, Oscar-winner, but she was still very respectful of Woody, and the idea was if Woody’s not entirely happy it doesn’t happen. Nor should it happen.” 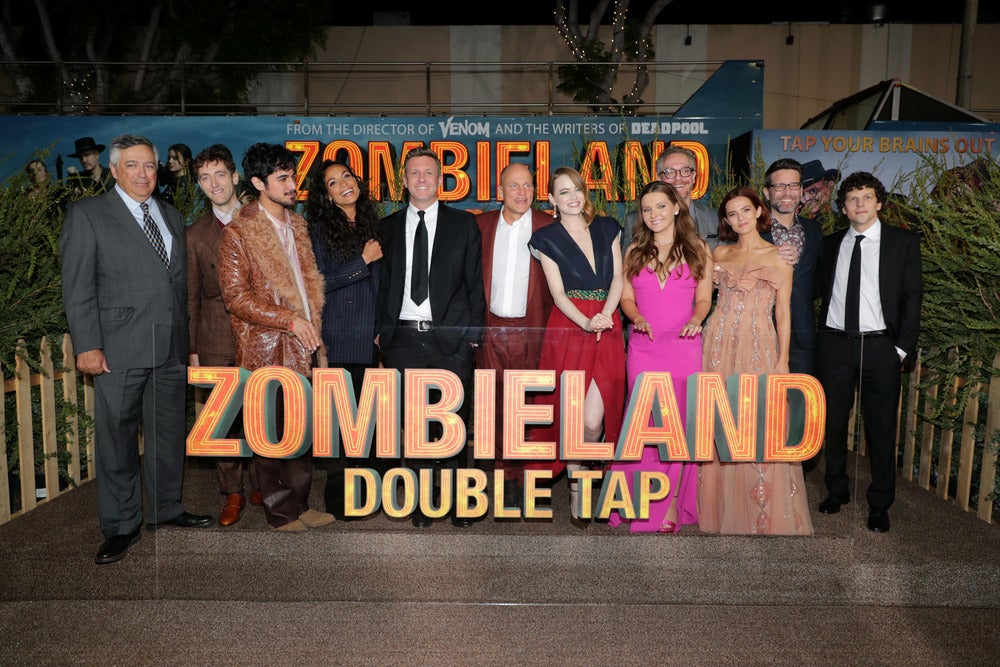 The cast and crew of Double Tap at the premiere. (Photo: Sony Pictures)

So what was it about that draft of the script that got Harrelson and everyone else so excited? “It was just capturing the spirit of the first one in the most authentic way,” Fleischer said. “Like not trying too hard, not pandering, really just feeling like it had the same creativity and originality and distinctive voice that the first one had.”

That’s the other thing many of us forget about Zombieland. When it was released in 2009, zombies were cool, but they weren’t fully mainstream. It wasn’t until The Walking Dead debuted a year later that zombies had their big moment and, it turns out, Zombieland kind of paved the way for that.

“[Creator of The Walking Dead] Robert Kirkman really does credit Walking Dead and its success to Zombieland,” Wernick said, “Because Zombieland, at the time it was 2009... zombies weren’t commercially successful. And I think what he was saying was it opened [Hollywood’s] eyes to the idea that zombies can be commercial and I think that led to AMC moving forward on Walking Dead and it [becoming] the massive success that it is. Not that we’re claiming any responsibility for its success. But I think for its forward momentum early on, [Zombieland proved] it can work and can make money. And so here we are.”

Yes, here we are: days away from the opening of Zombieland: Double Tap, a movie fans have been asking for for years. The question now becomes, was everyone involved right? Will this film live up to its predecessor and still feel fresh and fun despite a decade of zombie madness? It’s time to nut up, or shut up, as the film might say.