You should go to your optometrist more than once every twelve years. That’s called being an adult and having good common sense. I, however, am bad at adulting and somehow found myself in my early thirties, wearing a severely outdated prescription. How bad was it? I was at the point where after getting off the train, I needed to take out my iPhone and use the camera to zoom in on the next street to see what direction I should walk in.

What is it?: An at-home test to check your prescription

Like Checking my prescription in my pyjamas. Can order glasses online via app.

Dislike: I still had to go to the optometrist. Their prescription was more accurate.

That’s why I jumped at the chance to check out EyeQue VisionCheck. For $70 (£54), plus international shipping fees from the US, you can ostensibly check your vision via an “optical smartphone attachment” and then actually order glasses online. As someone with phone anxiety and a deep existential hatred of doctors’ offices – it’s a dream come true. Initially, I was wary that something like this could work to any degree. When I saw EyeQue had won the CES 2019 Innovation Award, I felt somewhat reassured that the worst that could happen was I got a bunk pair of glasses. While some CES Innovation Awards border on wacky (This Umay Rest Thermal Meditation band?), it’s also awarded to legitimate products like the Lenovo Yoga Book C930 or the Sony WH-100xM3 headphones.

The idea behind the EyeQue is it’s essentially a miniature, phone-based version of that large contraption at your optometrist’s office – an autorefractor. You know, that hulking machine you sit at to stare at a fuzzy image until it gradually comes into focus. (It’s used to estimate your prescription, before further refining it with a phoropter while you look at a “Big E” chart.) How it works is you first download the EyeQue VisionCheck app for iOS or Android, and strap the mini refractometer to your phone screen. Then you stick it to your eye, and what you end up seeing are two discrete lines – one green, one red. Your job is essentially to merge the green and red lines together into one yellow one, with the help of some touch sensors on the side of the device. You do this about eight times per eye, which altogether make up one test. This somehow measures how light is refracted into your eye and voilá, the app spits out a prescription.

The second half of the test involves a pair of plastic glasses to measure your pupillary distance – or, the distance between your pupils. You basically stick the glasses on, take a selfie with the app, and then mark the centre of your pupils and the glasses’ bridge with some little green x’s. This is to give you the best possible fit. 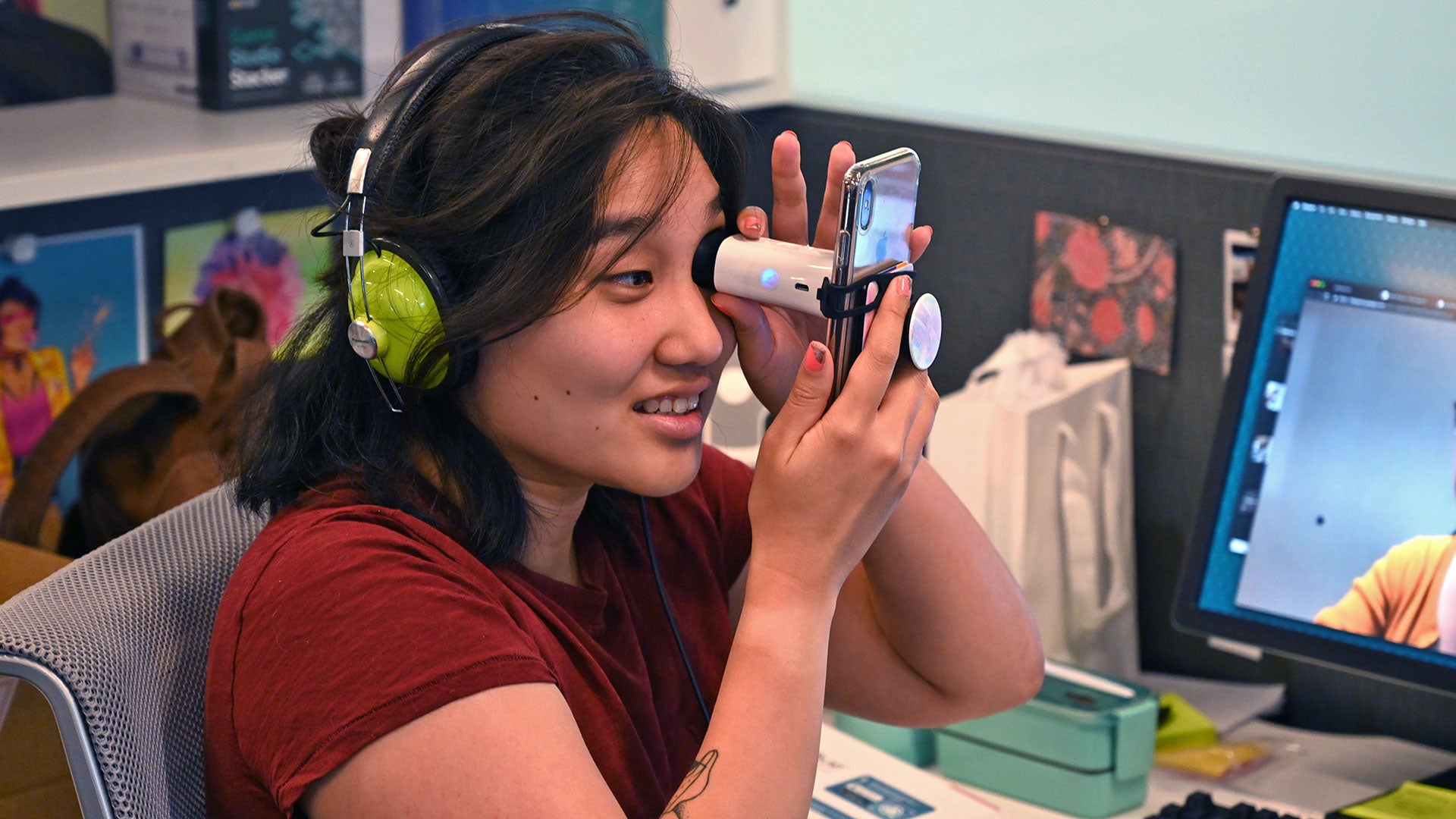 If this sounds wacky, it kind of is. You will look stupid. I most definitely did. To learn how to properly take the test, I had a Skype demo with the EyeQue folks. In the process, I got a fair number of looks from bewildered coworkers. It also takes about 15 minutes to really get a feel for what you’re supposed to do, thought there are tutorials within the app to help. I also found the sensors to be a bit difficult to press, meaning they’re probably not the best for the elderly or people with limited mobility in their hands. EyeQue recommended you take at least three tests for accuracy, but since it’d been so long since my last eye test, they advised I take the test an additional three times just to be safe. All in all, it took about an hour for me to finish 6 tests. Once that was done, I put in an order for a new pair of glasses, which arrived about two weeks later.

As I expected, years of sitting hunched over my computer screen meant my eyesight had deteriorated. My old prescription jumped from -7 in each eye to -7.75. The cylindrical measurement for my right eye went from -1.25 to -2.25. My axis measurement in the right eye stayed about the same, going from 170 to 164. My left eye, however, worsened from 10 to 29. (Note: These were taken in the US so correspond with US-format prescriptions; as per EyeQue's website, however, test results are given in the same format as your prescription.)

But how accurate were these readings really? Sure, when I put on the pair I’d ordered through EyeQue, my initial thought was “Oh, so that’s how faraway things are supposed to look.” That said, small print or distant signs were still blurry. If I closed my left eye, things got way fuzzier. Many moons ago, a doctor told me my eyes were “tragically bad” thanks to severe astigmatism. That made me wonder if the reason my vision was still blurry was because EyeQue couldn’t handle eyes as bad as mine. To find out I had to suck it up and go to an actual optometrist. 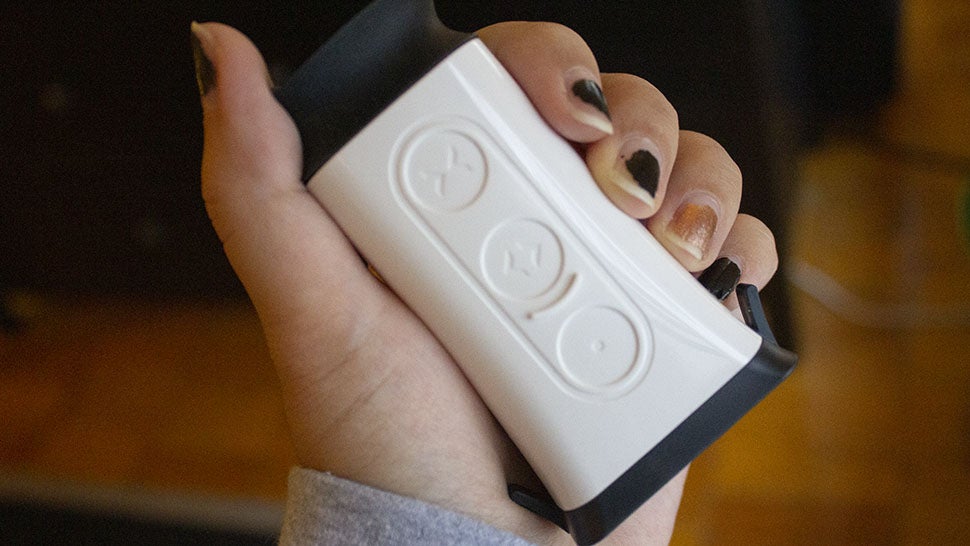 You use these three toggles to align a red and green line. That somehow measures the refraction of light in your eyeball. (Photo: Victoria Song/Gizmodo)

So off I went. In addition to finding out I had many, many things wrong with my eyes (don’t sleep with contact lenses in), the optometrist also told me to throw the EyeQue in the garbage. After a vision test, she determined my prescription was in fact, -9 in the right eye and -8 in the left. Other than that the cylindrical and axis measurements were relatively similar. I was still -2.25 and 165 in the right, and -1.25 and 15 in the left. That didn’t seem all that different to me, but my optometrist thought otherwise. Looking at the EyeQue readings, she noted that it failed to catch my right eye was much worse than my left – a fact I vaguely remembered my childhood doctor telling me as well. To drive the point home, she had me try and read letters off a chart with the prescription she wrote for me, and then with the one EyeQue had given. Things were undeniably much clearer with my optometrist’s prescription. (That said, my right eye is so bad my doctor said it’s unlikely I’ll ever get 20/20 vision, even with glasses.)

In my doctor’s opinion, something like EyeQue would probably be fine for someone with a low prescription, without more complex issues like astigmatism. She was also quick to point out that it would not be a good idea for contacts, and strongly emphasised that devices are unable to diagnose serious conditions like macular degeneration, cataracts, or glaucoma. Not that EyeQue claims it can do any of those things – it doesn’t. But I can see how it might be easy to conflate vision tracking with overall eye health. Similarly, people sometimes hail the Apple Watch as a device that might save your life simply because it can now monitor for irregular heart rate or arrhythmia. However, just because an Apple Watch doesn’t sound an alarm, doesn’t mean you’re free and clear. In the same vein, if EyeQue doesn’t detect worsening vision, that doesn’t mean your eyes are in perfect health. 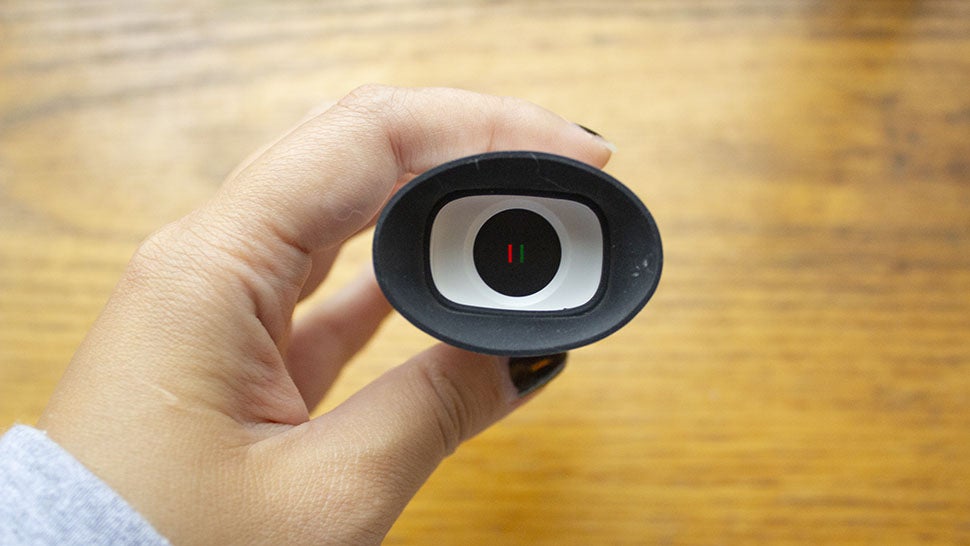 If you look into the refractometer, you’ll see a red and green line. During the tests you have to align them into a single yellow one. (Photo: Victoria Song/Gizmodo)

Finally, while EyeQue did win a CES Innovation Award, that’s not a substitute for something like official government clearance. Sure, it sounds impressive but winning an award isn’t the same thing as earning a certification from a government agency.

I went back to EyeQue with my optometrist’s concerns, and my different results. An EyeQue spokesperson emailed me back, writing, “There’s actually no magic number. Eye doctors generally consider variance up to 0.5 diopters as acceptable – meaning if you visited a different ophthalmologist on the same day, you would likely get a slightly different prescription.”

EyeQue also said that the results I got from its test was comparable to the one my optometrist gave me. That struck me as odd, given my eye doctor’s reaction. They also told me that 90 per cent of their customers surveyed said glasses they ordered via EyeQue performed the same (33 per cent) or better (53 per cent) than previous pairs. It’s true the EyeQue glasses I ordered were better than my old ones. It’s also true the glasses I got with my optometrist’s prescription were even better. Vision is important, and it stands within good reason that I’d want the best possible prescription for my eyes. 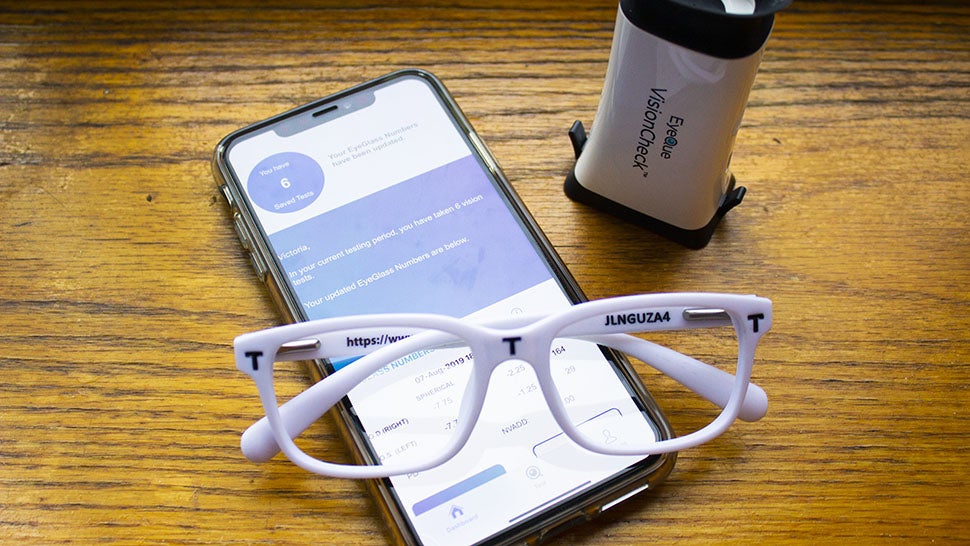 These white frames are used to measure your pupillary distance – a measurement you need to determine how your glasses will fit you. (Photo: Victoria Song/Gizmodo)

“EyeQue is designed to be used between doctor’s visits to get more people engaged with their eye health. The convenience of having these devices at home means you can take a quick test any time you feel your vision, or your family’s vision has changed,” the spokesperson added.

That last bit sounds fair. Except, if I still have to go to my optometrist, who will likely check my vision each time I go, then what is the point again? Savings? That's what Specsavers is for. If the actual cost of frames and lenses is the issue, well EyeQue isn’t really going to solve that. I’m not convinced it’s a good means of further engaging with your health either. After all, it took 12 years to feel my vision had changed and that maybe I needed a checkup. Plus, it might just be my optometrist, but she didn’t find my EyeQue results that compelling or helpful. 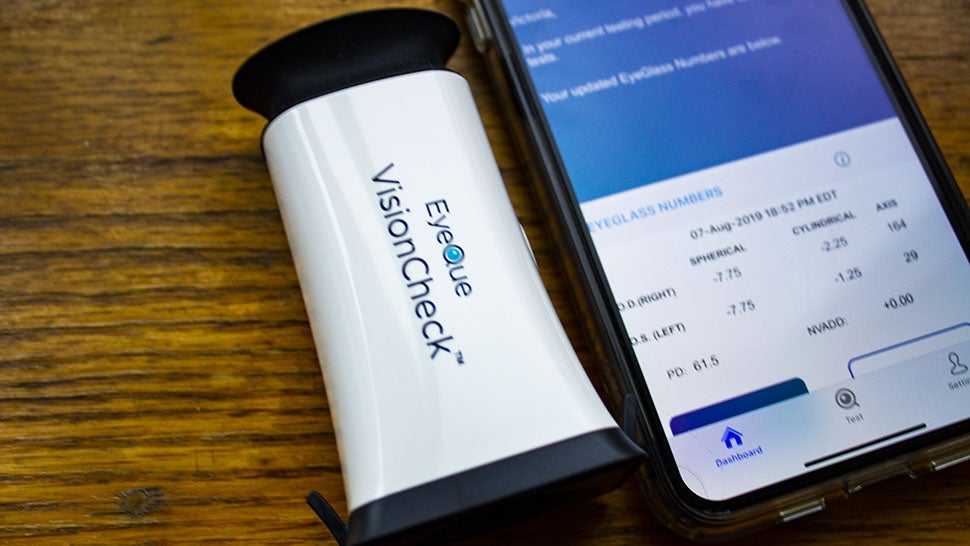 The prescription I got here didn’t account for my right eye being much worse than my left—though the cylindrical and axis measurements were close. (Photo: Victoria Song/Gizmodo)

So if not savings, is it convenience? While I found EyeQue easier to use the more tests I did, I wouldn’t call it easier than telling my optometrist whether or not something was clearer or blurrier. Sure, it was cool that I could spend an hour at home in my jammies, staring into a tube attached to my phone. But that hour roughly added up to the amount of time I spent filling out forms, waiting, and finally being examined at the doctor’s. Start to finish, ordering a pair of glasses through EyeQue and ordering them on my own took about the same amount of time.

The most valuable thing I got from this experience was it forced me to go to the optometrist. EyeQue would probably say that was the goal all along. I could see this as being useful for anyone who lives in a remote area, where it’s not at all easy to get to an eye doctor. It might also come in handy for the disabled. Or if your only pair of glasses broke and you just needed a new pair of glasses quickly without finding an optometrist.

That said, if the main reason you haven’t been to the optometrist is laziness – you really don’t need to shell out £54 plus international shipping for the privilege of taking eye exams at home. Especially not when there are cheaper options available. Don’t be like me. Suck it up. Go get your eyes checked out.