I Wore Hasbro's Ridiculous New Star Wars Replica Helmet for a Day, and All I Got Was Some Neck Ache

No wonder those pilots spend most of their time outside of the cockpit with these things off. They’re heavy.

One of the more expensive offerings Hasbro had for this year’s Triple Force Friday extravaganza was the latest helmet in its Star Wars: The Black Series line of “roleplay” items. Joining a line that already had everything from Darth Vader’s helmet to more Stormtrooper variants than you can shake an Incinerator Trooper at, the Luke Skywalker X-Wing Battle Simulation Helmet is a 1:1 replica of the same helmet worn by everyone’s favourite Rebel-turned-Jedi-turned-Milk-Swigging-Curmudgeon in both A New Hope and The Empire Strikes Back.

Packed with lights and sounds to replicate Luke’s experiences at the battles of Yavin and Hoth, the main draw is it’s...well, a Star Wars helmet you can put on your head.

It’s definitely a lavish thing – it should be, for a suggested £100 retail price. But anyone can put a stupid collectible on their head for 10 minutes, flip some switches and press some buttons, and then call it a day while they wonder where the hell they have the space to put a helmet that is way bigger than you’d ever thought it was despite seeing it in movies you’ve watched zillions of times over.

Here, we are thorough. We are incredibly stupid. We do not have better things to do. 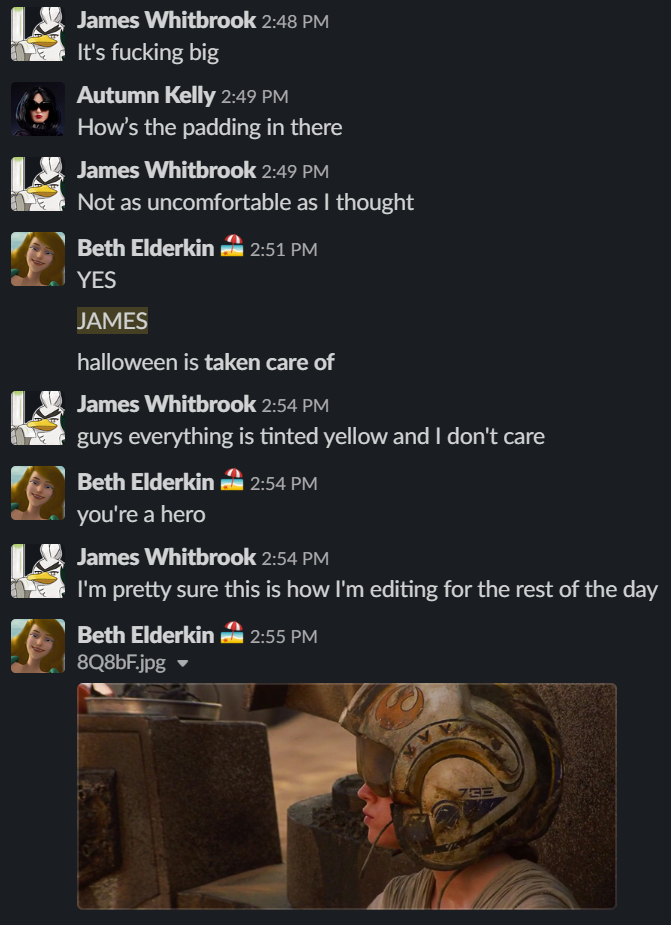 A bad decision is made. (Screenshot: James Whitbrook/Gizmodo)

So when Hasbro sent along one of the helmets for review, I decided to really put the new helmet through its paces. Was it meant to just be something you’d put on once for a couple of minutes and then let gather dust on display? Could it really withstand the intense and vigorous lifestyle of a work-from-home writer? I sent a slack message to my colleagues, saying it would be real dumb if I spent the day wearing it after I’d taken the mandatory social media selfie.

Then I wore it for my entire work day. Below are my scattered notes of the experience.

3:00PM: Helmet on. Sitting at my desk scanning news feeds. This’ll be easy. It’s bulky, but it’s not even that heavy.

3:15PM: I’ve just realised that I really should’ve put my earbuds in before deciding to not take this giant, rather tightly-fitted helmet off all day. I crank up the Sayonara Wild Hearts soundtrack on Spotify as loud as it can go and can just about hear it. 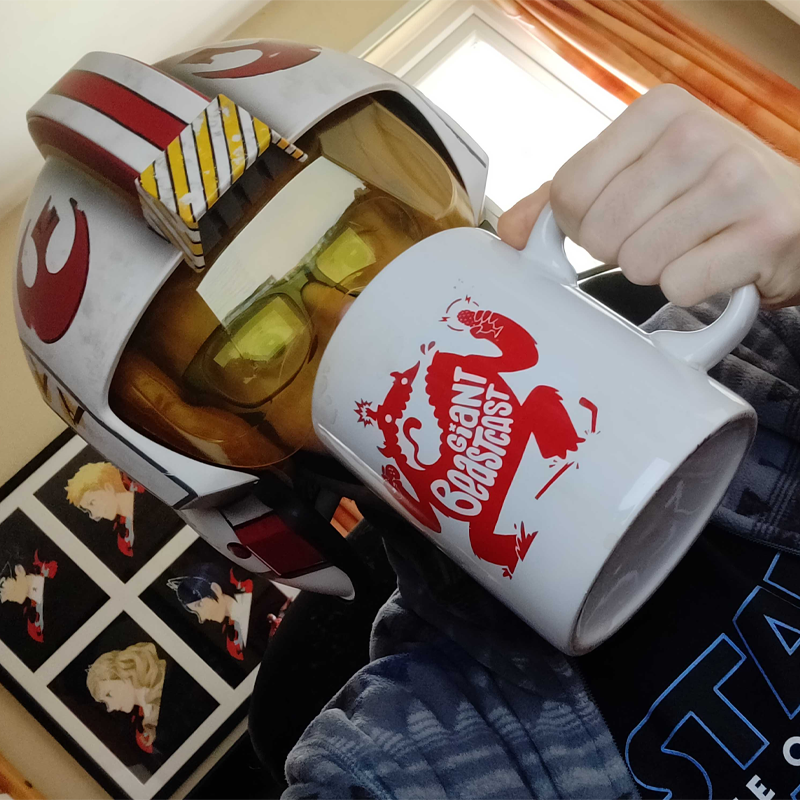 3:35PM: The first time I clanked my mug of tea against the helmet’s (nonfunctioning) microphone was amusing. What feels like the 75th time already starts to become an annoyance.

4:00PM: I remember that the helmet makes sounds if you press a button. I dab at the right hand side of the helmet and R2-D2 beeps and whistles. It’s fun!

4:15PM: I also remember I have not done my daily planks (yes I’m that sort of tiresome individual), and suddenly begin to regret the thought of doing them with what feels like a pound of plastic on my head.

5:00PM: As I have absolutely zero intention of walking around in public with this helmet on, I let my dog Holly have a run around in the back garden instead of our usual walk. She does not like the sight of me in this helmet.

5:15PM: It is thankfully only “miserable” levels of grey outside instead of “British Summer” levels of grey, so I feel comfortable actually standing outside wearing this thing instead of hanging out by the door hoping to not get rained on. 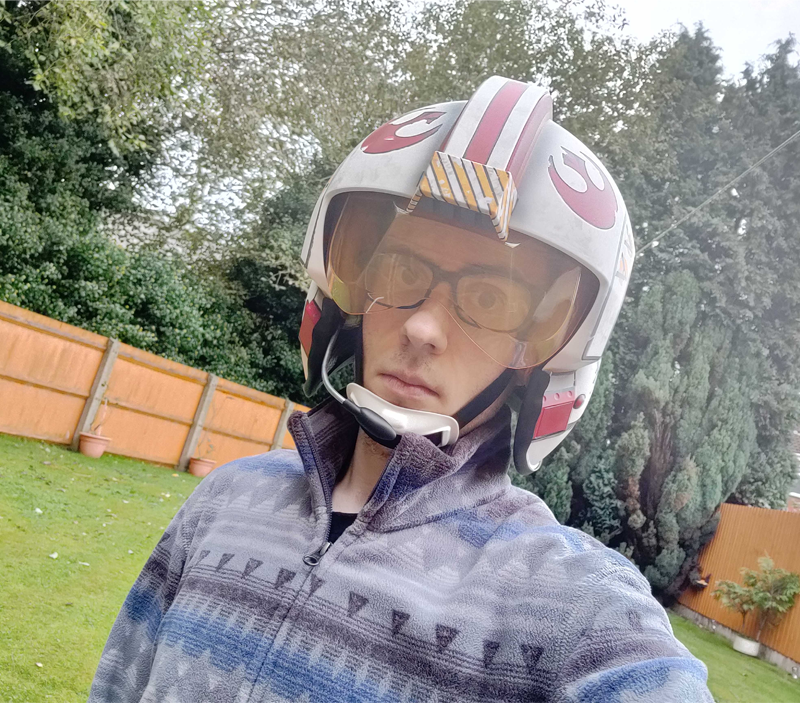 Happy October, everything is grey. Like basically every other month here. (Photo: James Whitbrook/Gizmodo)

6:00PM: It’s starting to get dark, so I decided to test out the helmet’s other functions. This is more than just a replica of Luke’s helmet, but a “Battle Simulation” Helmet, after all – which means if I hold down the button that previously made R2-D2 beep and boop, depending on whether the switch at the base of the helmet’s inside is switched to either Yavin (X-Wing) or Hoth (Snowspeeder), the visor plate lights up and enters the “simulation” mode.

I hold down the button. The visor lights up with red and green LEDS for about three seconds, and then the built-in speakers start repeating a droning loop of X-Wing engine noises occasionally interrupted by Gold Leader from A New Hope announcing his attack run on the Death Star trench. It does not last all that long, and I am unimpressed.

6:3oPM: Starting to think this might have been a dumb idea.

7:00PM: Sir Patrick Stewart is announced as a surprise guest for Destination Star Trek, a convention taking place near me in Birmingham later this month. I make a note of the irony of me excitedly booking tickets to his talk about the upcoming Star Trek: Picard series while wearing a stupid Star Wars helmet.

7:10PM: Dinner! A stir fry I can eat with chopsticks seems like the least ungainly thing I can consume at my desk while editing posts and wearing this helmet, until my first attempt at opening my mouth makes me realise I, in my infinite wisdom, had tightened the chinguard strap way tighter than I thought. I move it off of my chin and begin an awkward dance of reading, eating, and trying not to get rice over the chinstrap of a £100 helmet.

7:45PM: Getting a bit bored of this whole “wear a Star Wars helmet all day” lark. Especially since, as a remote worker, all my interactions with colleagues are text based. They’ve all mostly forgot that I’m in the process of being an idiot at this point.

To amuse myself, I try switching the simulation mode from Yavin to Hoth. Trying to do this with the helmet already on is much more awkward than it has any right to be, but hey, a normal person would just take it off, I guess.

7:50PM: Fumbling over, I hold the button down. The same three-second light sequence as before plays, except the drone of Snowspeeder is way louder and annoying than an X-Wing. This time, I’m thankful the simulation mode seems perplexingly short.

8:30PM: Now extremely bored and having knocked my mug against the helmet’s (nonfunctioning) microphone for what feels like the millionth time, some idle futzing about leads to me discovering that pressing the sound and light button again while simulation mode is active actually plays new sequences of sound and light, with extra voice clips.

Beats listening to a Snowspeeder drone in my ears for 30 seconds again!

8:35PM: I pressed the button again and Dak Ralter, Luke’s snowspeeder co-pilot, cries out in sudden agony as his cockpit console explodes, killing him.

I do not press the button again.

9:30PM: The weight of the helmet hasn’t really bothered me yet, but the fact that the padding and general size of it have started to overheat my head even on a cool autumnal night has. It gets to the point I take off my fleece jacket, and I’m contemplating even opening my office window.

9:45PM: I close the window. It’s fucking freezing. But my head is still significantly warmer than the rest of my body, so that’s weird.

10:15PM: I’m trying to write about Powers of X #6 and suddenly this helmet feels five times as heavy as it did even an hour ago. I think can sense that I’m nearly done for the day. All I have to do is write some bullshit about Charles Xavier and I can be free.

At least that's distracting from the dull ache in the base of my neck.

10:45PM: My US colleagues have started to sign off for their weekends. I’m here, writing about mutant evolution and post-humanity. Wearing a helmet. I’m so close to freedom.

11:00PM: Post filed. I immediately stand up and unclip the helmet strap. I am free. I put the helmet on my desk and sincerely hope I never wear it again. Then I remember they’re making a Boba Fett version and really hope Hasbro don’t send that along for review any time soon. 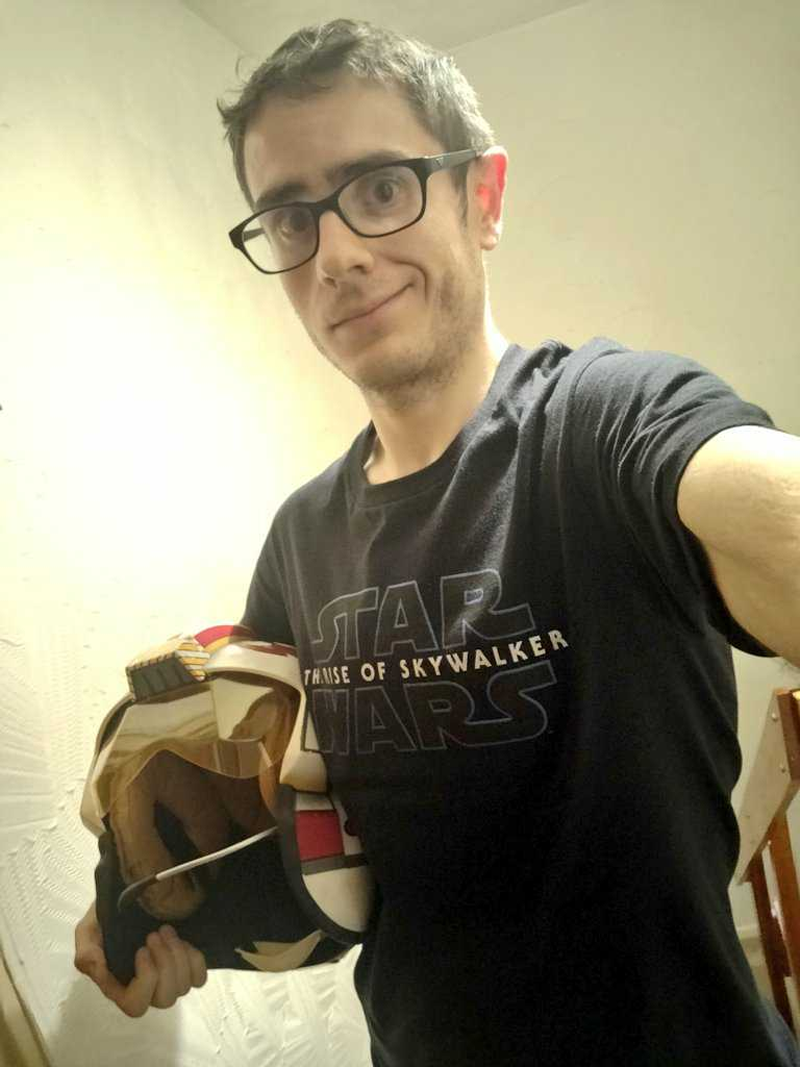 Turns out the way to avoid severe helmet hair is to have a short, bad haircut already, so no one can tell the difference. (Photo: James Whitbrook/Gizmodo)

The Luke Skywalker X-Wing Battle Simulation Helmet is available now. Should you buy it? Maybe. Should you wear it as you go about your business all day? Probably not. Does my neck still hurt after a couple of days recuperation? Sort of.