In the She-Ra and the Princesses of Power Season 4 Trailer, Heroes and Villains Rise Up

By Beth Elderkin and Charles Pulliam-Moore on at

She-Ra is back and heading our way surprisingly soon. The cast revealed the first teaser for She-Ra and the Princesses of Power’s fourth season at New York Comic Con – which will consist of 13 episodes – along with the release date for the return of Adora, Catra, and the newly crowned Queen Glimmer... with a new look and outlook on life.

Netflix has unveiled the first look at She-Ra and the Princesses of Power season four, which returns 5 November with 13 episodes, meaning this one isn’t truncated like the past two seasons. In an interview with us, showrunner Noelle Stevenson shared that she was happy to see the series return to 13 episodes this season, noting how this story is one long thread that works best when watched together.

Stevenson confirmed there will be a time jump between seasons, but said it’s not a major one. Following Queen Angella’s “disappearance” (Stevenson pointedly didn’t call it a death), Glimmer is now queen of the rebellion, a role which comes with its own challenges, and Catra has seized power from Hordak to become co-leader of the Horde. This leaves everyone else struggling to find their place and see where their relationships lie, as the threat of Horde Prime continues to grow.

The trailer also gives a peek at a new character, Double Trouble, the green Elven-looking figure who Stevenson described as a nonbinary shapeshifting mercenary, who Catra has brought on as protection and counsel. She was tight-lipped about who is voicing the new character but said they’ll be revealing that soon. Here’s the synopsis for season four:

Season 4 begins with the respective rises of Queen Glimmer as leader of the Rebellion and Catra as co-leader of the Horde. As the Horde makes advances on the Rebellion under the looming threat of Horde Prime’s arrival, the Princess Alliance makes heroic strides but begins to disagree on the best way to defend Etheria. Ultimately, a shocking discovery about Etheria itself causes Adora to reconsider everything she thought she knew.

We’ve also got a couple of new posters, which includes a peek at Catra and Glimmer’s awesome new outfits – with Glimmer paying homage to her mother’s queenly garments – and a better look at Double Trouble. 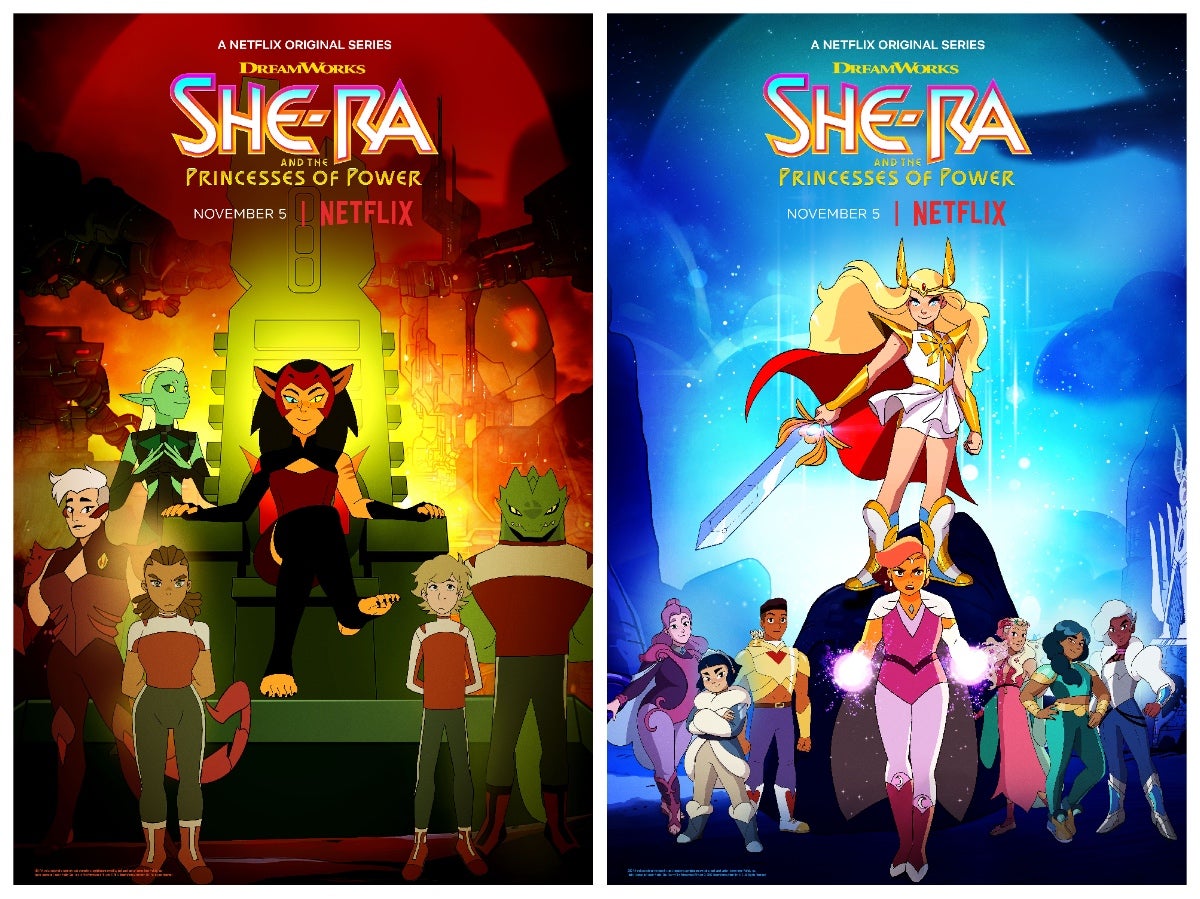 Posters for the good and bad sides of She-Ra and the Princesses of Power. (Image: Netflix)

At this year’s New York Comic Con panel, Stevenson and the She-Ra cast went into a bit of detail about how the show’s fourth season will spend a fair amount of time focusing on the ways in which a number of core characters will embark upon important personal journeys that culminate in drastic transformations. Glimmer’s becoming queen entails her developing a deeper, more powerful connection to her kingdom’s moonstone which makes her significantly more powerful, but she also has to take on a number of new duties as Bright Moon’s queen that she’s got to balance with her adventuring.

Catra asserting her dominance over Hordak will lead to interesting developments in the Fright Zone as the power dynamic between the villains shifts and they prepare for Hordak Prime’s forces to invade Etheria. But as much as the series is getting into bigger picture storylines exploring She-Ra’s larger mythos, season four will still take its time to centre more grounded stories, like Scorpia’s gradual realisation that her relationship with Catra is toxic and that she deserves better.

She-Ra and the Princesses of Power returns with season four on 5 November.