Images from NASA’s Jet Propulsion Laboratory show its next-gen rover standing on all six wheels for the first time.

As NASA counts down the months and days until the launch of its next robotic mission to the Red Planet, the space agency’s engineers are busy constructing and testing the Mars 2020 rover. A new NASA timelapse showcases the latest major milestone, as the rover can now support itself on its six legs and wheels. The images were taken on 8 October 2019 inside the Simulator Building located at NASA’s Jet Propulsion Laboratory in Pasadena, in the US state of California.

“After years of design, analysis and testing, it is fantastic to see the rover on her wheels for the first time,” said Mars 2020 engineer Ben Riggs in a NASA press release. “The whole team looks forward to seeing her in the same configuration on Mars in the not too distant future.”

That “not too distant” future is definitely creeping nearer and nearer. Launch is slated for July 2020, at which time the yet-to-be named Mars 2020 rover will head into space atop a United Launch Alliance Atlas V rocket.

For the Mars landing, which should happen on 18 February 2021, NASA will be employing a new technique that’s never been attempted before.

With its parachute deployed, the entry module will scan the surface by taking photos and perform a trajectory analysis. NASA has targeted Jezero Crater on Mars, but should the module stray off course or head toward a dangerous spot, the descent vehicle will make the required adjustments by firing its retrorockets. All this will be done autonomously, as it takes over 20 minutes for signals to go to and from Mars – NASA engineers won’t be able to guide the landing themselves. Should all go well, “it will be the first spacecraft in the history of planetary exploration...to accurately retarget its point of touchdown during the landing sequence,” according to NASA.

Once on the surface, the Mars 2020 rover will explore the 49-kilometre-wide (30.4-mile) Jezero Crater in search of ancient life. NASA chose this particular spot because the crater was once filled with water. To scoot around this dried-up lake bed, the 2020 rover will lean heavily upon its six aluminium wheels, both literally and figuratively. 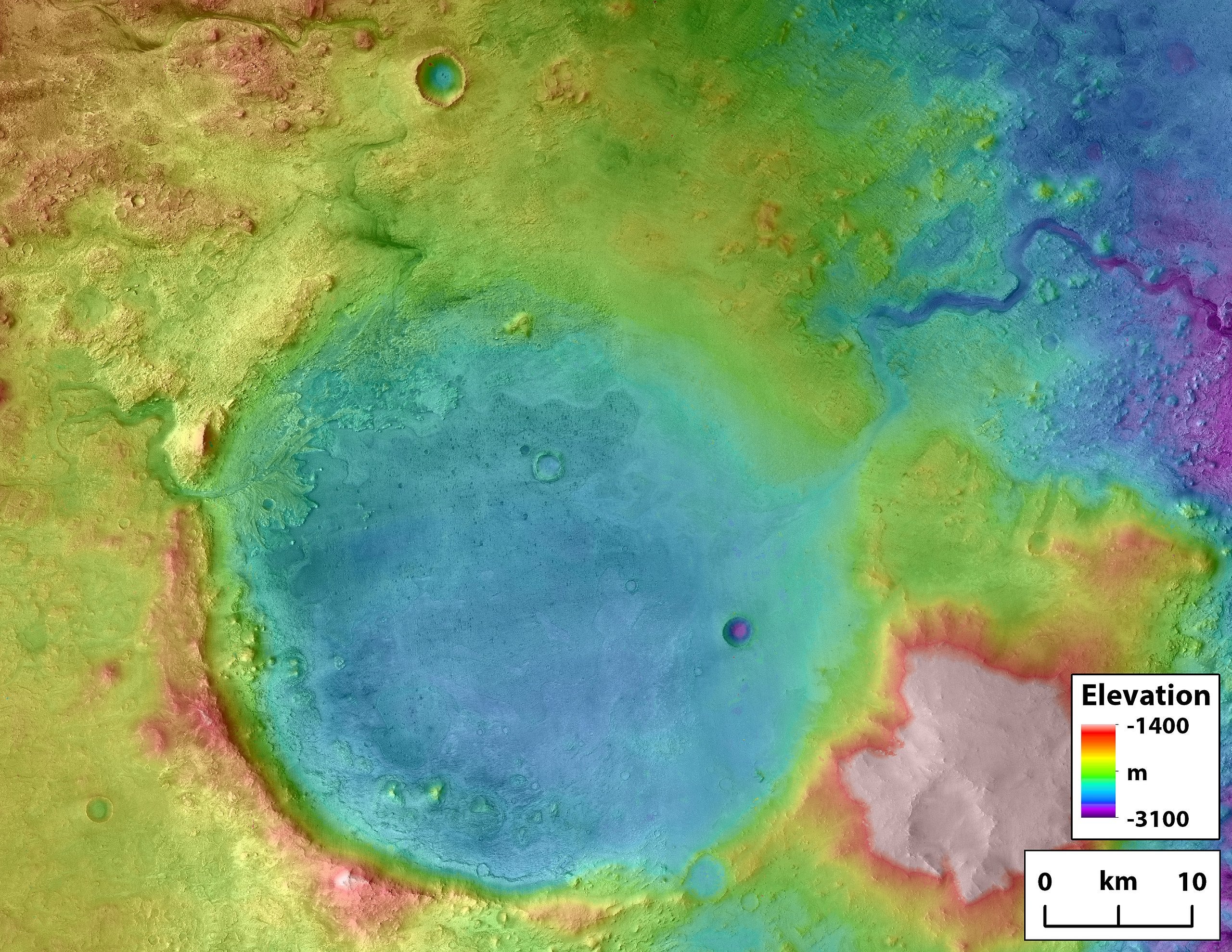 The wheels measure 52.5 centimetres (20.7 inches) in diameter, and their rolling surface is covered in cleats, called grouses, that will enable the rover to grip firmly upon the Martian surface. Each wheel has its own motor, so should one or two wheels suddenly fail, the rover should still be able to keep rolling along. The front and rear wheels also have steering motors, which will allow the vehicle to spin 360 degrees. As an aside, the six wheels currently on the Mars 2020 rover are placeholders, as the actual wheels for the mission won’t be installed until next year.

The Mars 2020 rover can also traverse steep angles using its “rocker-boogie” suspension system. Multiple pivot points and struts will allow the vehicle to maintain steady weight on each wheel to ensure stability. During the mission, the Mars 2020 team will want to avoid angles steeper than 30 degrees, but if necessary, the rover can endure 45-degree terrains in any direction without falling over. The rover should also be able to traverse uneven terrain, including rocks and pits equal to the height of its wheels.

A contest for US schoolchildren to name the rover closes on 1 November 2019.