Star Wars loves – loves – itself a single-trait environment. Whether that’s planetary biomes or species, if you’re a thing in Star Wars, you’re likely defined by a singular concept. This week’s new Rise of Skywalker prequel comic combines that love with another frustrating franchise love – cyclical storytelling – to pretty bummer effect.

This week saw the release of the second issue of Star Wars: Allegiance – by Ethan Sacks, Luke Ross, Lee Loughridge, and Clayton Cowles. It’s a new Marvel Star Wars comic that’s part of the wider Lucasfilm publishing initiative dubbed “The Road to The Rise of Skywalker,” a series of media tie-ins that tell key stories setting up the path from the end of The Last Jedi into the ninth and final entry of the Skywalker Saga.

When The Last Jedi left the Resistance all but broken by the relentless First Order invasion of the galaxy, Allegiance and stories like it have seen what’s left of the rebellious group reach out to old allies of both the Resistance itself and the organisation that inspired it, the Rebel Alliance, in an attempt to reunite the galaxy against a renewed tyrannical threat. Allegiance has seen Leia – with a little help from Chewie, Rose, and Rey – head to Mon Cala, the aquatic abode of the Quarren (the aforementioned squid people) and the Mon Calamari, hoping that once again she can convince a tired people, all too familiar with the costs she asks of them, to take up arms alongside her as they have done befor

Things do not go well – as they didn’t before. From the minute Leia and her friends land in Dac City, they’re treated with suspicion by the Mon Calamari, but especially so by the Quarren representative (General Nossor) that plays a part in the planet’s dual-species governing body. Even initially presenting her arrival as a way to honour the death of Admiral Ackbar with his son, Aftab, Leia, her allies, and the Resistance are made to be felt distinctly unwelcome.

When she petitions the Mon Calamari king, Ech-Char, things become clearer: the Mon Calamari are tired. They’ve fought in wars for decades at this point, multiple wars at the behest of Leia Organa. She asks a lot to trust that they’d do so again, to the consistent heavy cost to Mon Calamari and the Quarren alike – more than just leaders like Admiral Raddus and Admiral Ackbar, but their ships, literally built out of their cities, their peoples to staff them, and the spirits those people hold. Because, as we’ve said before, all of this has happened before.

But it’s not the only thing familiar to this story. Leia faces an uphill battle to convince Mon Cala to enter the fight again, but what she doesn’t yet realise is that she’s entered a trap (if only someone were still around to warn her!). The climax of the issue reveals that General Nossor is making plans to make the Resistance look even more unwelcomed on Mon Cala, sending his goons to goad Rey, Rose, and Chewbacca into a public brawl. Because it turns out that Nossor is up to no good... 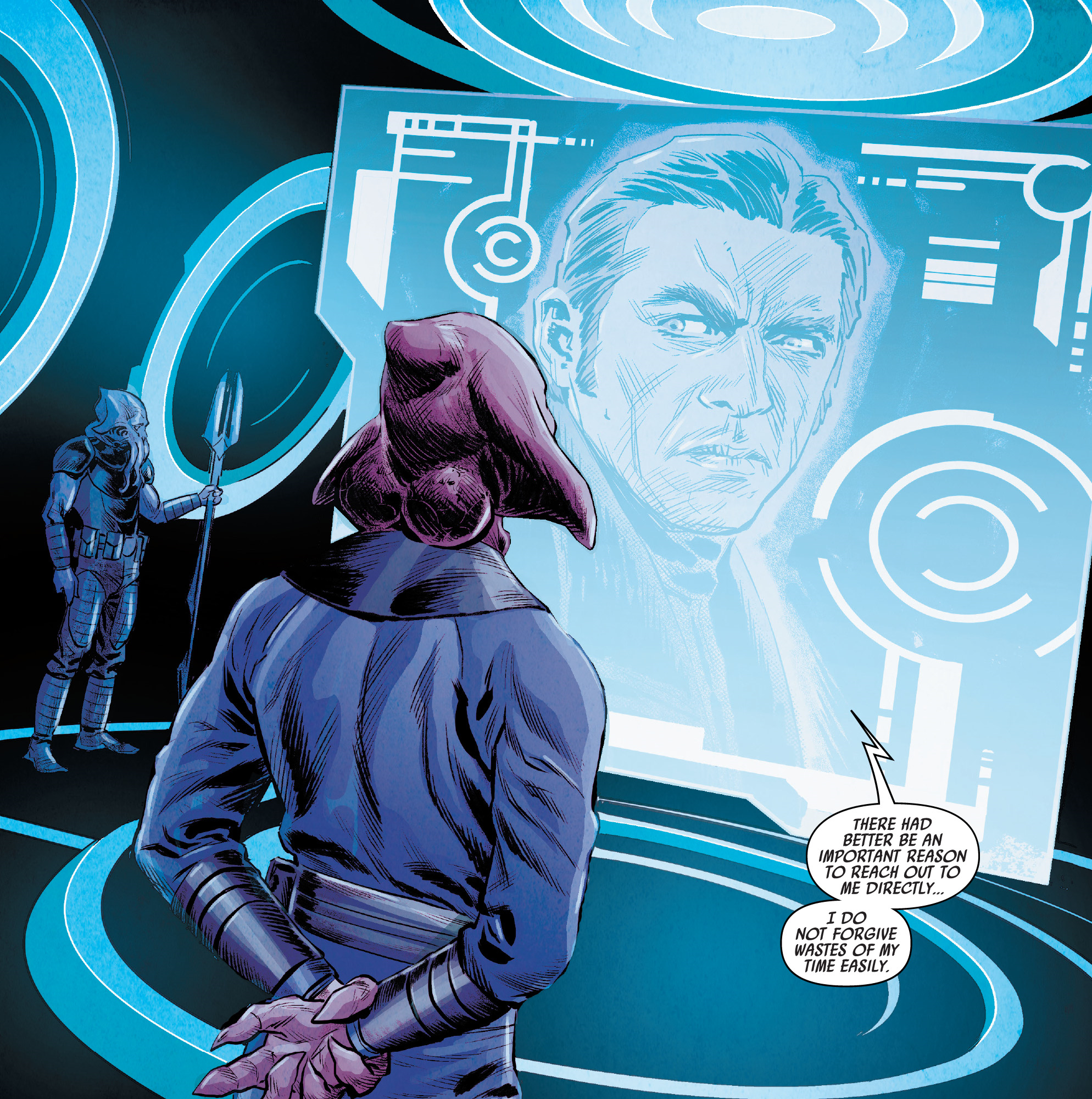 ...and is working with the First Order to rat out the Resistance. Surprise!

Except, it isn’t. Because Nossor’s predecessor-in-government did the exact same thing to Leia, Han, Luke, Chewie, and Ackbar when this exact same story played out in the pages of Kieron Gillen, Salvador Larroca, Guru-eFX, and Clayton Cowles’s run on the main Star Wars series. At least that time, it was a Mon Calamari, the Regent Urtaya – and the Quarren and Mon Calamari themselves were simply following along in being Imperial subordinates after the planet’s first attempt at rebellion had been cruelly crushed by Darth Vader in his own comic series, set years prior.

And it’s also not the first time the Quarren specifically have been turncoats to the good guys. Beyond that, when this same story was told in the Clone Wars animated series, the Quarren secretly worked with the Separatists against the Mon Calamari King Lee-Char (backed by the Republic) in an attempt to gain Quarren rule over the planet at large. Hell, the betrayer in question? Chieftan Nossor Ri. Literally the same Quarren, doing the same plot! 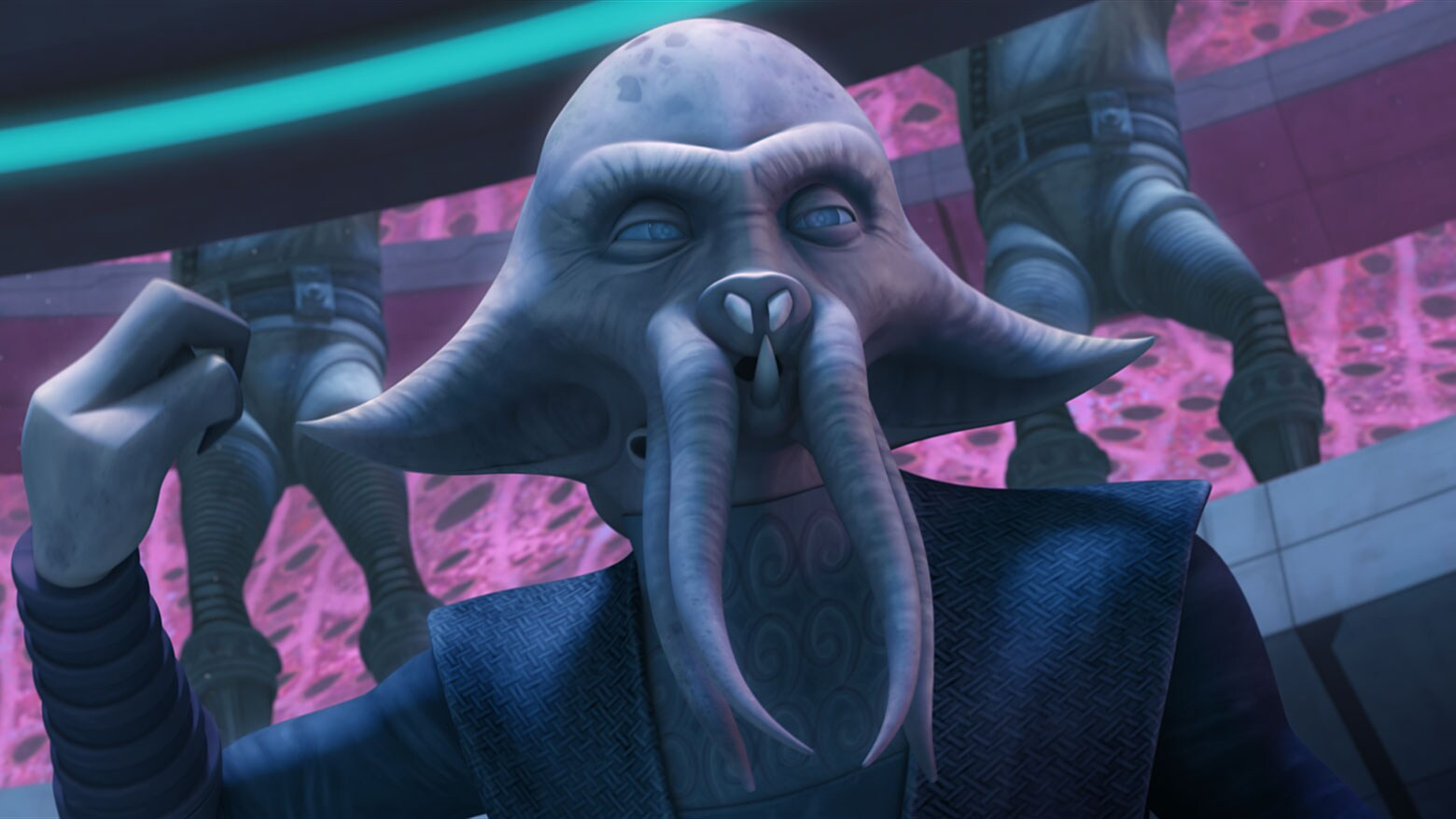 It means that, essentially, over the course of roughly 50-60 years in the Star Wars timeline, the Quarren have either actively committed subterfuge or indirectly played along with the forces Star Wars presents as “the bad guys” – be they a coalition of secessionists, an actual fascist Empire, or the hateful descendants of that Empire – three different times. And, because it’s Star Wars and you can’t swing a glowing laser sword around without severing the limb of at least one Skywalker, they’ve done so by attempting to betray a member of the galaxy’s most prominent bloodline each time too, whether it was Anakin in the Clone Wars, Luke and Leia in the Galactic Civil War, or now Leia again in this Age of Resistance.

You know, like how all Bothans are spies because a bunch of said spies got killed delivering the plans to the second Death Star, or how all Toydarians are weirdly uncomfortable anti-Semitic stereotypes (because Watto), or how all Trandoshans are asshole mercenaries (because Bossk). Inversely, it’s why we get the Mon Calamari as noble tacticians like Lee-Char, Raddus, Ackbar, and potentially Aftab himself. Or Wookiees all being incredibly dedicated warriors, because that’s what Chewbacca is.

And even though over the years Star Wars has used both of those tropes to a positive benefit, here, it just kinda sucks? It’s this heady mix of Star Wars telling the same exact tale over and over and the way the franchise typically stereotypes its alien species to create an effect that is both hilarious and yet also oddly dark. Why trust a Quarren whenever they show up in a Star Wars story? Ninety per cent of the time they will be aggressive when faced with change, and with outside influences – and, in the process of acting on that aggression, turn toward the nearest legion of space secessionists they can find to sell you out.

Wouldn’t it be more interesting at this point to inverse the relationship, and have a dismayed sect of Quarren turn to Leia and reveal that, after two long bloody wars, it’s the Mon Calamari who’ve been broken enough to turn to the First Order? Wouldn’t be more interesting for there to be any inkling of a diverse ideology instead of what appears to be generation after generation of Quarren leaders willing to sell their people and planet out to the nearest strongman? Wouldn’t it be interesting if we were not telling this exact same story for the third time?

I guess, at this point, it’s become enough of a Star Wars trait that some might feel that doing such a thing would just simply be un-Star Wars. And we only have to look at the...let’s say varied reaction to Luke Skywalker’s crisis of faith in The Last Jedi to see how fans reacting to things they have deemed “un-Star Wars” can turn out these days. Who knows – there are still two issues of Allegiance left to wrap up this prelude series, so there’s space for twists and turns. Maybe this time Nossor won’t return to the side of the heroes after his betrayal. Maybe, given the First Order’s penchant for betraying even its sympathisers, he won’t live long enough to do so.

But right now it just all feels so tired, for a franchise that can, and needs, to do better. Especially as we get ever closer to a reality where The Rise of Skywalker arrives, actually does what it promises to do and ends this story, and – at least for a little while – Star Wars cannot rely on the same familiar nostalgia to grow.

If not for our sake, but the Quarren. They deserve a break from being spineless stooges for a bit.