Marvel Is Bringing Black Widow, Hawkeye, and Star-Lord to the Podcasting World

Listen up, because Marvel stories are heading to your ears (again). Marvel has announced it’s working on a new series of podcasts about some of its most famous superheroes, which will debut on SiriusXM and Pandora.

As stated in a press release, Marvel has secured a deal with SiriusXM to create a slate of podcasts for the subscription radio platform and Pandora’s streaming service. They include three 10-episode scripted podcasts about Hawkeye, Black Widow, and Star-Lord.

Of course all of these characters are major players in the Marvel Cinematic Universe right now, with Black Widow getting her own prequel movie, Hawkeye having a series on Disney+, and Star-Lord set to return in Guardians of the Galaxy Vol. 3... whenever that happens.

In addition, Marvel announced a podcast centred around Wolverine, with plans for an Avengers-style team-up to bring the characters together. A SiriusXM representative confirmed to us that their Wolverine podcast will be separate from the one Marvel developed with Stitcher, which has had two seasons (The Long Night and The Lost Trail) but hasn’t yet been renewed for a third.

There will also be a couple of unscripted shows that go behind the scenes of Marvel, including one that looks at the history of the company “through a modern-day lens,” talk shows, and an interview series featuring celebrities and special guests. SiriusXM also said in a statement that it will get to debut several “popular Marvel podcasts” before other platforms, but it hasn’t yet said what those podcasts are. 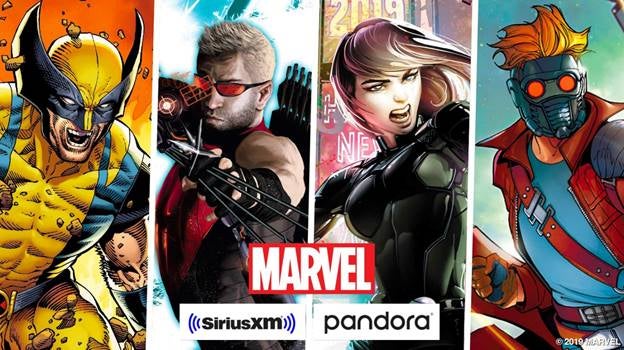 According to The Hollywood Reporter, this is a project Marvel has been working on for a long time and reportedly shopped it to a lot of different podcasting networks before setting on SiriusXM and Pandora.

The podcasts will debut exclusively on those platforms, and after a period of time will be released on other platforms as well. However, a SiriusXM representative couldn't confirm how long the planned exclusivity windows will be.

The Marvel podcasts will roll out weekly, starting sometime in 2020.