Usually, it’s pretty easy to differentiate between two sides of a phone. The front side has a screen, while on the back you find cameras. But on the Nubia Z20, things aren’t quite that simple.

That’s because, in addition to a main 6.4-inch AMOLED display, the Z20 also comes with a secondary 5.1-inch AMOLED on its back, which makes this thing a sort of two-faced wizard. Now a lot of people might think this is overkill (and it kind of is), but having a relatively large display on both sides of the device does have its benefits.

The most important advantage is that by having a screen on the same side as the Z20's camera module (containing a primary, ultra-wide, and 3x optical telephoto lenses), you don’t need an extra camera “in front” just to take selfies. You just flip the phone around and voila. 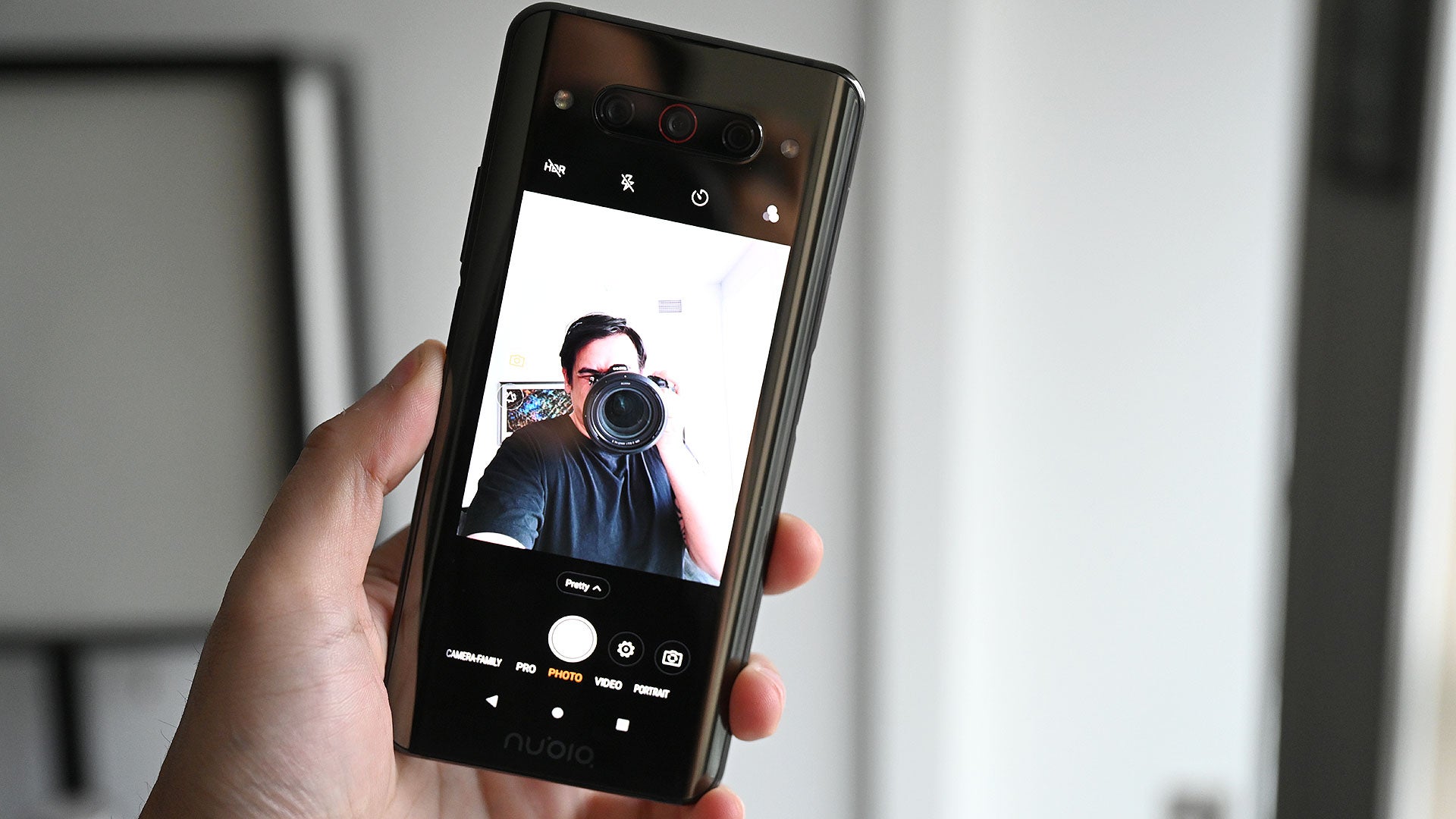 This also means that the main 6.4-inch display can deliver a true full-screen experience because there’s no need for any notches or punch holes or motorised pop-up cams with questionable durability. And when you combine Nubia’s dual-screen setup with a phone featuring sleek gently sloped glass and a rounded metal frame, you get something that’s extremely sleek and rather nice to hold. There practically isn’t a sharp edge on the entire device.

And if you’re really into selfies, being able to use all three of the Z20's cameras is helpful, especially if you’re thinking about taking a large group shot with the phone’s 16-MP ultra-wide-angle lens. 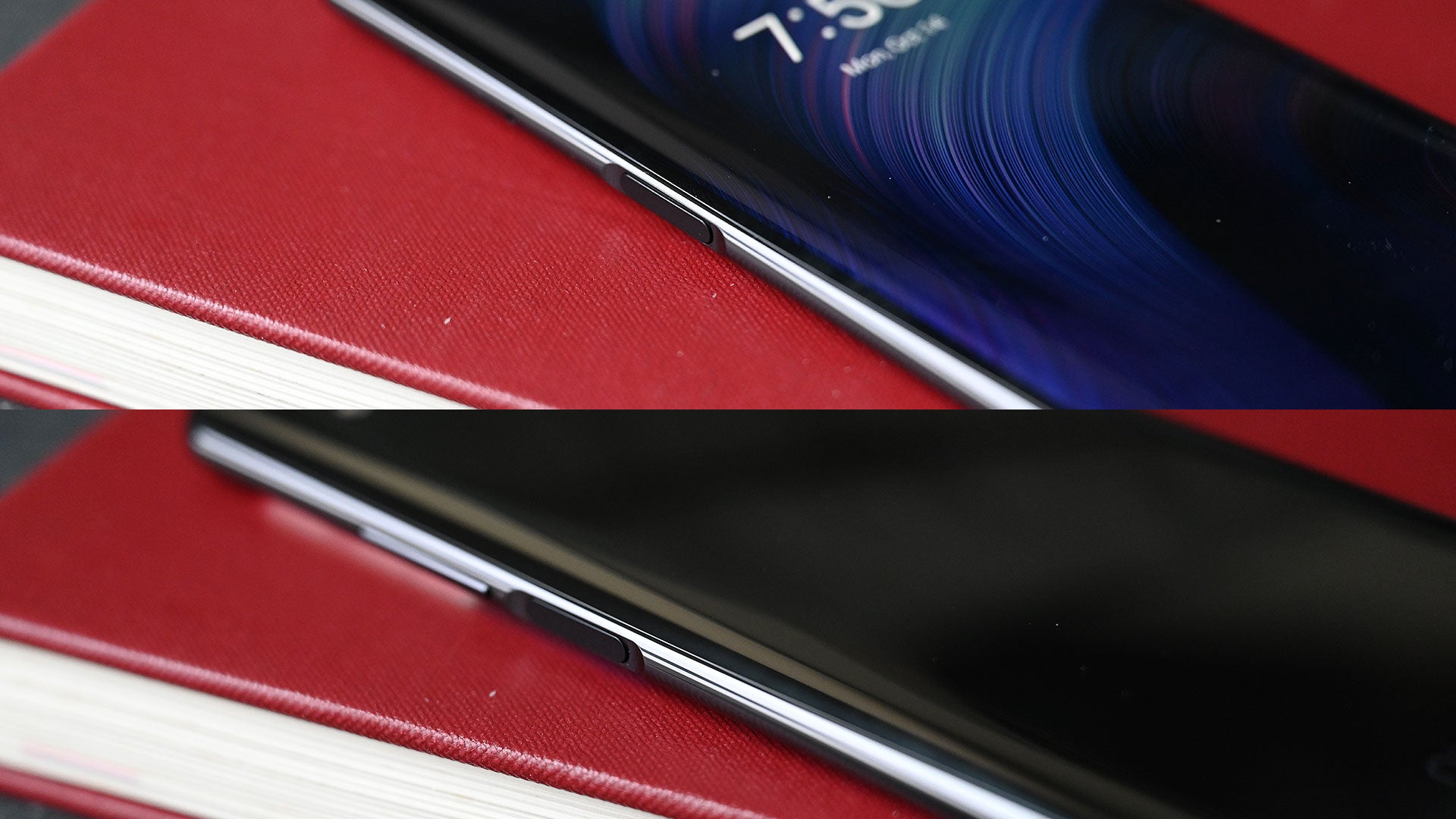 I’ve never really felt the need to have more than one fingerprint sensor. (Photo: Sam Rutherford/Gizmodo)

Screens aren’t the only feature the Z20 has in abundance either, as Nubia has included dual side-mounted fingerprint sensors installed on the left and right edges of the device. This makes the Z20 pretty friendly for more ambidextrous folk, though in my short time with the device, I found that those fingerprint sensors can be overly sensitive, often registering false touches if your hand merely brushes the side of the phone. However, since my preview unit came equipped with pre-production software, that’s something Nubia may be able to adjust for final, consumer-ready devices.

Having two screens to manage can also be somewhat annoying when tweaking settings, as Nubia had to duplicate a lot of options for each screen. That means you get separate controls for things like enabling the phone’s blue light filter on the second screen, and choosing between a mirrored view for front and back, or going with a multitasking option that lets you have different apps open depending on which display you’re using.

The Z20 is pretty good at guessing at which screen you want to use (Photo: Sam Rutherford/Gizmodo)

The Z20's design also comes with a few limitations. By having a screen on either side, there isn’t any space to include coils for wireless charging. And if Nubia continues with this design in the future, adding features like dual in-display fingerprint sensors could become somewhat cost prohibitive. But what might be the most frustrating thing is that there doesn’t seem to be a way to have both displays turned on at the same time, which seems like a weird choice for a dual-screen phone. Even if using both screens simultaneously would crush overall battery life, it’d still be nice to have the option.

Bur for now, a lot of these minor annoyances become pretty forgivable when you take the Z20's price into account. For two screens, two fingerprint sensors, three cameras, a Qualcomm Snapdragon 855 chip, 8GB of RAM, and 128GB of storage, the Z20 only costs £500. That’s £50 less than the OnePlus 7T for similar specs, though admittedly, the OnePlus does have a cleaner and newer build of Android (Android 10 instead of Android 9 on the Z20).

But between the Z20 and phones like the recently announced Xiaomi Mi Mix Alpha, now that we’ve practically perfected the typical smartphone design, it seems dual-screen handsets are going to be the next big thing.