Smartphones are currently plagued by a host of ugly design features that compromise aesthetics for functionality, including holes and notches in their screens, and protrusions on the back to accommodate camera optics. But those bumps might soon go away thanks to a team of researchers at the University of Utah in the US who’ve developed a radically thin camera lens.

For comparison, the lens elements used in today’s smartphone cameras, which gather and focus light onto a tiny sensor, are a few millimetres thick. It might not sound like much, but the best smartphone cameras use multiple elements, which quickly add up, resulting in a thin phone simply not having enough room to house all of them: hence the camera bump trend. But a team of electrical and computer engineering researchers at the University of Utah have succeeded in creating a new type of optical lens that measures just a few microns thick, or about a thousand times thinner and one hundred times lighter than what you’ll find in smartphones today.

How is that possible given the curved shape of a camera lens is crucial to it being able to capture and bend adequate light and an entire scene in one photo? As detailed in a new research paper published in the Proceedings of the National Academy of Sciences, the lens takes an approach similar to the giant solar furnaces in operation around the world. Instead of a giant single reflective element that would be prohibitively expensive and challenging to manufacture, these furnaces use a sprawling array of smaller reflectors each positioned at varying but specific angles to reflect their light onto a central tower. One by itself doesn’t produce much heat, but hundreds of them add up to generate temperatures as hot as 3,500 degrees Celsius. 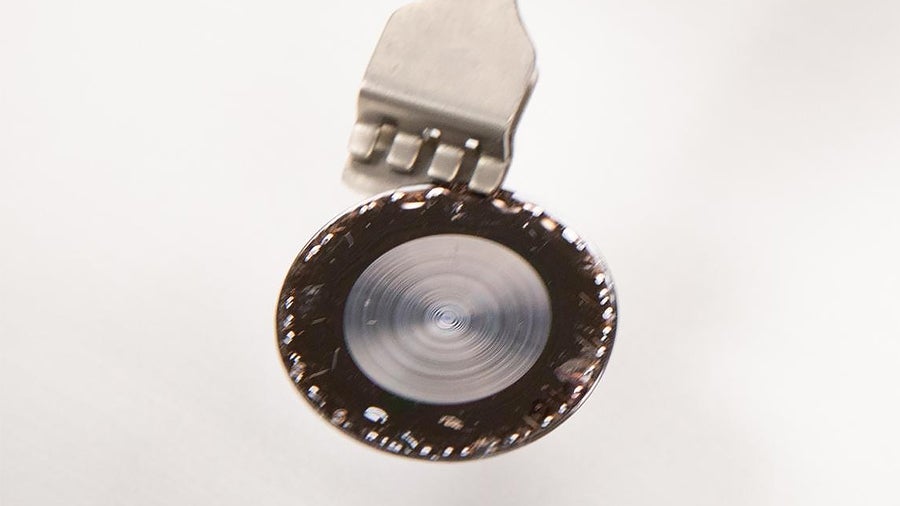 The lens the researchers created is actually made up of innumerable tiny microstructures, imperceptible to the human eye, and strategically positioned so that each one bends and redirects light towards a camera’s sensor. When they’re all working together, they produce the same results as a single curved element does. Manufacturing the lenses also required the team to develop a new fabrication process, a new polymer, and custom algorithms to calculate the shape and position of each microstructure. But the resulting lens can be completely flat, and made of lightweight plastic. If you’ve ever spent a day carrying around a camera with a big lens hanging off the front, you’ll appreciate that benefit alone.

Not only could this new approach to imaging eliminate the camera bump, it could help make entire smartphones thinner and smaller by freeing up even more room inside the housing, for both the device’s front and back cameras. It could also improve the flight time of reconnaissance drones who wouldn’t have to carry heavy wide-angle or telescopic lenses on missions, and professional photographers might no longer have to haul around shooters that look like bazookas.

Now let’s just hope there are researchers out there trying to figure out how to get rid of those hideous screen notches too.