Zombieland: Double Tap Is Exactly the Film You Think It Is

When Zombieland opened in 2009 it felt fresh. The meta, comedy spin on the zombie genre kicked several tried and true formulas in the pants and the film went on to be a huge success. Ten years later, Zombieland: Double Tap does all the same things the original did. And that’s pretty much it. The result is a suitably entertaining follow-up that’s fun but forgettable.

Zombieland: Double Tap brings back most of the core cast and creative team from the first film. Director Ruben Fleischer, fresh off the success of Venom, is once again at the helm. Writers Rhett Reese and Paul Wernick (this time joined by Dave Callaham) are back after two Deadpool movies. And Woody Harrelson, Emma Stone, Jesse Eisenberg, and Abigail Breslin, all of which now have at least one Oscar-nomination to their name, once again play the dysfunctional, unconventional family unit of Tallahassee (Harrelson), Columbus (Eisenberg), Wichita (Stone), and Little Rock (Breslin).

Basically everyone has grown up significantly since the first film which is exactly the plot of this movie. The four characters are living a decent little life when Little Rock, now a young woman, decides she wants to go off on her own. Everyone then goes off to find her.

There’s much more to it than that, obviously. Columbus and Wichita are experiencing a few bumps in their relationship. Several new strands of zombies have evolved over the years. And several new characters – played by Zoey Deutsch, Rosario Dawson, Thomas Middleditch, Luke Wilson and others – find their way into the story, all of whom give the film some welcome new flavour. 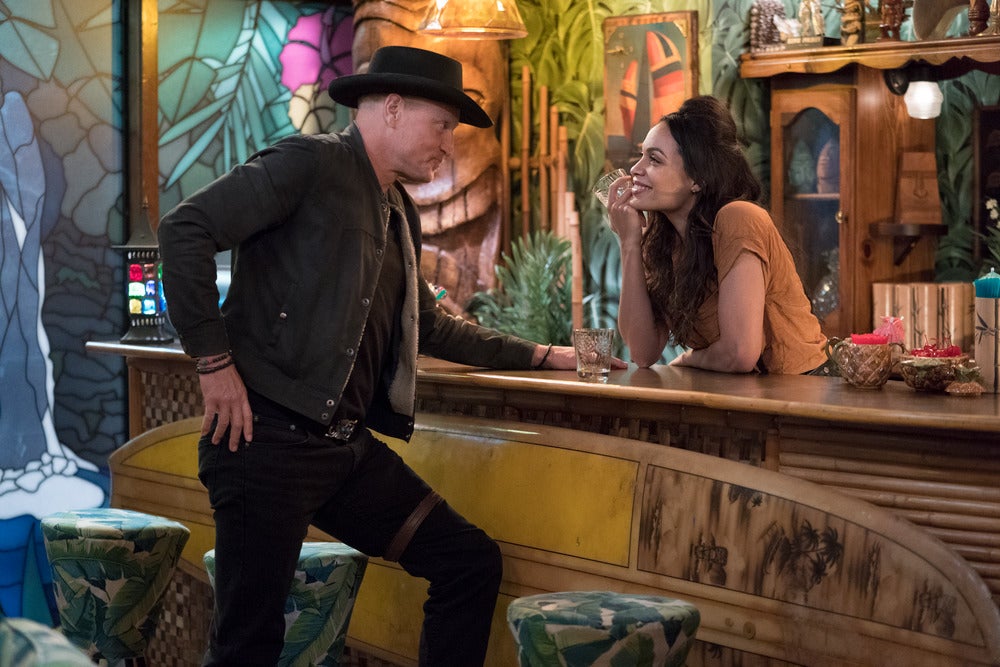 Rosario Dawson is a welcome addition to the cast. (Photo: Sony Pictures)

The first warning that Double Tap isn’t going to be all that great is in that first act. Because it’s been so long since audiences have seen these characters, the movie has to not just reset the table for the universe, but move it ahead too. So things are a little disjointed for a while. One story goes on for so long you forget another. Then that story comes back and it slows the momentum of the first one. It’s not bad, just jarring.

But as act two begins, the film focuses significantly and starts to hit a solid stride. The on-screen text representing Columbus’ Zombieland rules gets used to great effect, the action picks up significantly and gets increasingly gory. And after that rocky start, the effortless chemistry between the leads starts to shine once again. It may have been ten years, but the way Harrelson, Stone, and Eisenberg just bounce off each other is a joy to watch and there’s no doubt they are having a great time in this world.

In fact, the best scene in the movie is in this section, which involves doppelgängers for Tallahassee and Columbus, played by Middleditch and Wilson. Moving from tension to humour, and emotion to bombastic action in a way that only Zombieland can do. The scene is so good, it feels like it could have been the end of the movie.

And while the actual end of the movie amps up the scope significantly, it’s then when you realise when all is said and done, nothing is going to happen in Double Tap. Even when the film goes for a few big “changes” to the characters, the whole film has unfolded so matter-of-factly it doesn’t in any way feel like anyone has evolved or grown. We just so happened to pop back in on their lives for an eventful few days and after the credits roll, things will continue on as they had for the past ten years. That’s it.

The first Zombieland never aspired to be something it wasn’t but, because of its timing and originality, it became that. It became a new standard for zombie comedy. Zombieland: Double Tap, like most sequels, doesn’t reach that standard, but it doesn’t do it a disservice either. The film is simply okay, mixing a few moments of greatness, a few moments of boredom, and a lot of in-between. Fans of the original will probably like the sequel and for anyone else, there are worse ways to spend two hours. But better ways too.