Scientists Invent LED Device to Quickly Treat Carbon Monoxide Poisoning, Though It's Not Ready for Humans Yet

Doctors at Harvard think they’ve found a new way to stop a silent killer by literally shining a light on it. In experiments with rats, their light-based device was able to quickly clear away carbon monoxide stuck to blood cells. The nifty invention may someday help doctors and EMTs treat life-threatening cases of carbon monoxide poisoning in humans.

Carbon monoxide, or CO, is known as the silent killer, since it’s an odourless, tasteless, invisible gas. It can be deadly because of how it interacts with haemoglobin, the protein in our red blood cells that helps them ferry oxygen throughout the body. CO is much better at binding to haemoglobin than the oxygen we take in from air (typically two parts oxygen, or O2). So when we get too much CO in our bloodstream, it crowds out the oxygen and effectively suffocates our body’s organs and tissues.

Currently, the only treatments for CO poisoning involve making people breathe 100 per cent pure oxygen, either through a mask or in special chambers that expose the body to pure oxygen at a greater atmospheric pressure than normal. The trouble is that CO in the environment typically comes from the incomplete burning of carbon. That makes fires or explosions a common source of poisonings. Because the lungs of these victims are often damaged from smoke inhalation, oxygen treatments don’t work as well, since they can’t get rid of CO as easily by exhaling it out.

“A lot of people with CO poisoning end up having brain injury, and that’s what I want to avoid.”

But according to senior study author Warren Zapol, an anaesthesiologist at Harvard Medical School, we’ve known about another way to clear CO from haemoglobin for a long time. As far back as the late 19th century, scientists had shown that exposure to visible light, particularly red light, can break apart CO from haemoglobin without affecting oxygen.

It wasn’t until Zapol and his team came along, though, that anyone really tried to put that discovery to good use. A few years ago, his team showed that exposing the CO-poisoned lungs of mice and rats to light could improve their survival rate. But later efforts with other, bigger animals failed, likely because their larger lungs made it harder for the light to penetrate through to the CO.

In their new study, published Tuesday in Science Translational Medicine, Zapol and his co-authors say they found a workaround to this problem, by combining their method with another emerging treatment that’s being used for severe cases of CO poisoning with lung injury as well as other respiratory and heart problems. 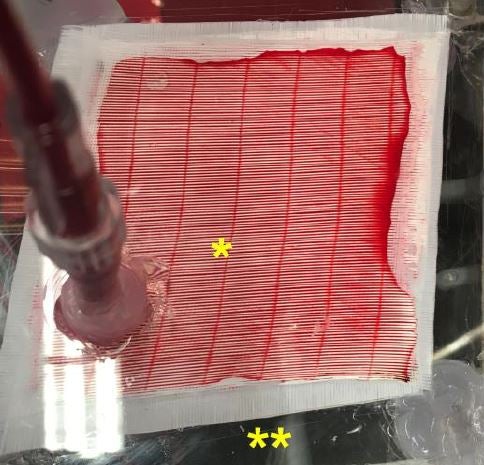 The device used to oxygenate and shine a light on the blood of rats poisoned with carbon monoxide, with different compartments for the blood and gas highlighted. (Photo: Zazzeron, et al/Science Translational Medicine)

The treatment, known as extracorporeal membrane oxygenation (ECMO), draws blood out through a person’s veins and sends it through a porous filter that’s 100 per cent oxygen before returning it back to the body. This external membrane is meant to mimic how our blood capillaries work. For their experiments, the team created a device that encases their own custom-made membrane in plexiglass, allowing it to be exposed to various wavelengths of LED light at the same time.

“We basically built a little artificial lung in a box, where we could shed some light on it and knock the CO off,” Zapol told Gizmodo.

In experiments with both human blood that was laced with CO as well as CO-poisoned rats, the combination therapy worked faster at removing CO than simply using the control treatment of ECMO alone, with red light being the clear winner. In otherwise healthy rats, the red light therapy was about twice as fast at removing CO than ECMO alone, while it was threefold faster for rats that were lethally poisoned and had acute lung damage. These lung-injured rats were also more likely to survive if they had the combination therapy.

The findings are obviously encouraging, Zapol said. And he’s hopeful that his team’s invention could become a routine treatment for CO poisoning, given its simplicity and portability.

“I can imagine an EMT in an ambulance, just putting in a tiny venous catheter and draining a little bit of blood at a time. And within maybe 30 to 40 minutes, we could really clean your blood up, even if your lungs are damaged – and we wouldn’t need a hyperbaric chamber,” he said.

Other research groups have experimented with light therapy for CO poisoning and come up with similarly promising results. But there’s some way to go before ambulances will start routinely stocking boxes filled with LED bulbs. As with Zapol’s earlier research, the concept needs to be upscaled and tested out with larger animals before human trials are a possibility.

Still, there’s definitely an unmet need for better, faster options in treating CO poisoning. In the UK, carbon monoxide poisoning is the cause of more than 4,000 medical visits and around 50 deaths per year, according to the Department of Health and Social Care. And even in cases where CO poisoning is ultimately treated, every second counts in preventing permanent damage.

“A lot of people with CO poisoning end up having brain injury, and that’s what I want to avoid,” Zapol said.

The team has already built their bigger and better device (which can be seen in the photo up top), and they’re next planning to test it out in sheep.