The Complete Guide to Using External Storage on iOS and iPadOS

Apple pushed out a host of new features in iOS 13 and iPadOS 13, and one of the most significant is native support for external storage – it means you can plug in thumb drives, external disk drives, and digital cameras and bring up the contents of those devices in the iOS and iPadOS Files app. Here’s how it works.

Most thumb drives and memory card readers plugged into the USB-C or Lightning port should work fine, with or without an adapter dongle (Apple’s Lightning-to-USB and Lightning-to-USB 3 camera adapters are known to work, for example).

Likewise, external hard drives with their own power supply – ones that hook up to the mains – are probably going to work too, cabled up with an adapter dongle if needed. It seems that the iPad Pro might be able to handle bigger drives than the iPhone, but we can’t give you an exact rundown on what will work and what won’t. 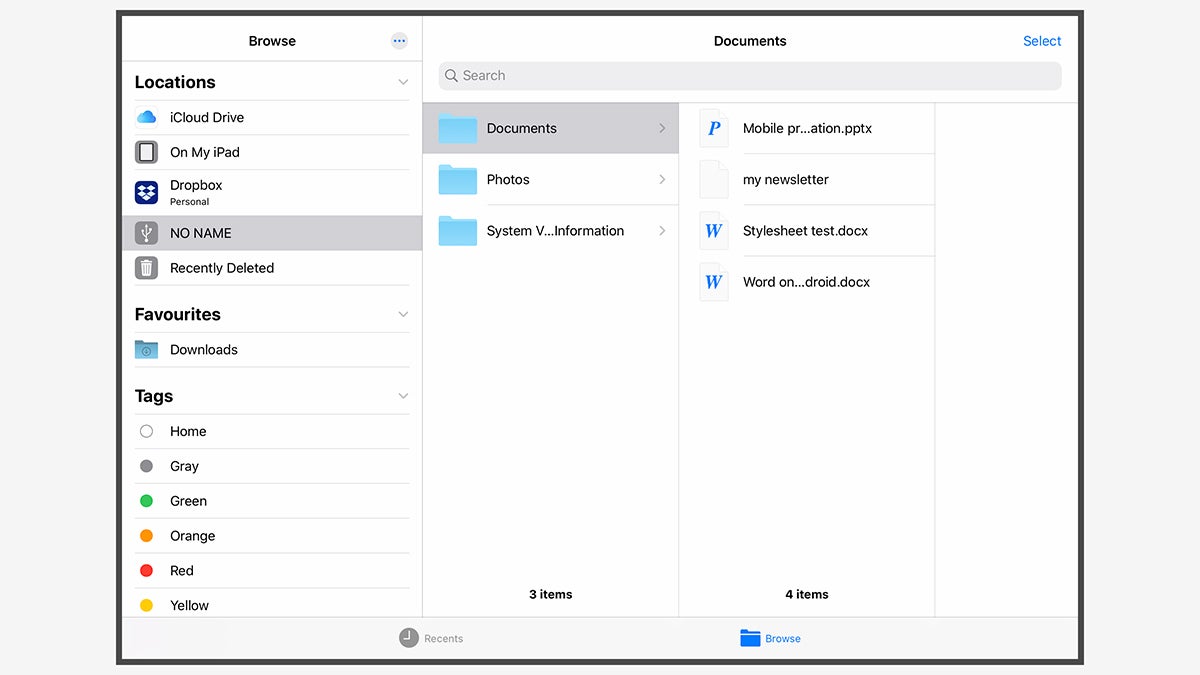 Also unclear, to some extent, is the situation with portable hard drives that draw their power from the connecting data port: It appears as though these won’t work unless you put a powered USB hub in between the drive and the Apple device. Some users report connecting several drives and cards at once using a hub.

As far as formatting goes, Apple has no official documentation but generally, if the drive can be viewed by macOS, then typically it can be viewed by iOS and iPadOS as well. Apple says the Ex-FAT, FAT-32, HSF+, and APFS formats are supported as far as external storage is concerned, so NTFS is left out. This means pulling a hard drive straight out of a Windows device and plugging it into your iPad may not work, but using storage devices that already work with both macOS and Windows will.

If you’re buying storage specifically to use with an iPhone or an iPad, your best bet is to buy a thumb drive with either a Lightning or a USB-C connector, depending on which device you’re connecting it up to – and if you can find some reviews of it from people who have already got the drive working with iOS and iPadOS, so much the better. 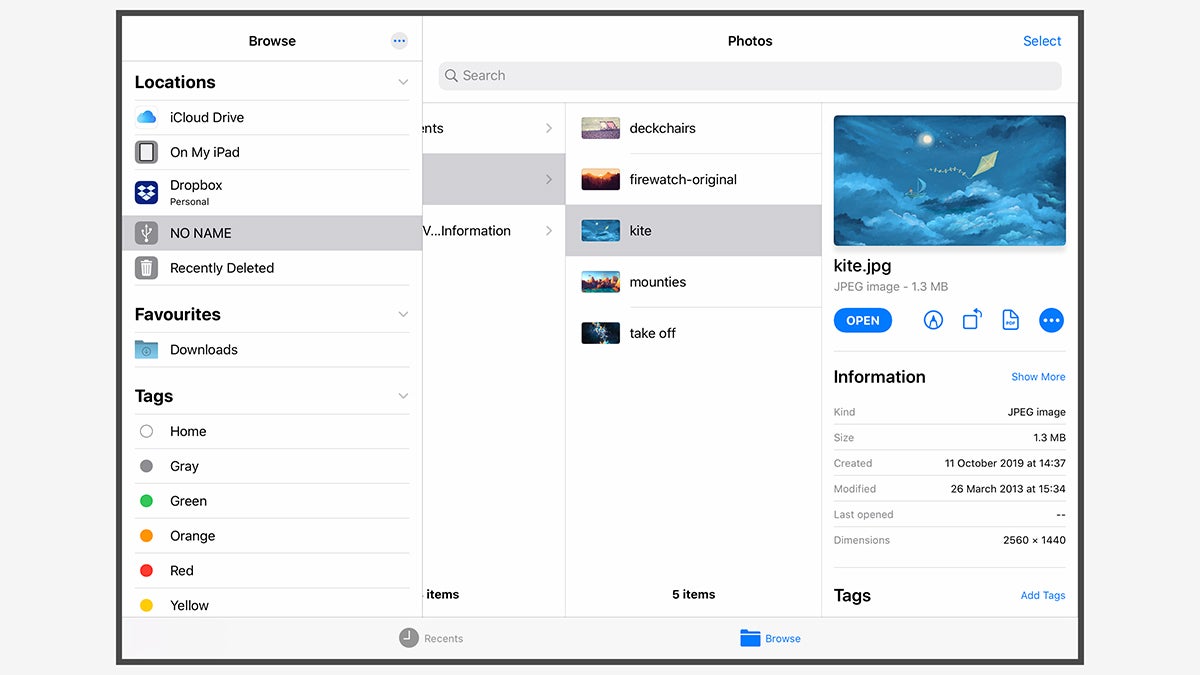 In our case, we plugged a FAT32-formatted USB thumb drive into an iPad Pro running iPadOS 13, via this £75 adapter dongle, which worked fine. We also tried a few SD cards pulled from cameras and inserted via this £11 USB-C card reader. Your mileage may vary, but whatever you connect up and however you’ve done it, what you see in the actual Files app should be the same.

From the Files app on iOS and iPadOS, tap on the Browse tab (if necessary) and the attached drive should appear, alongside links to the storage onboard the iPhone or iPad, and links to your cloud storage services (including iCloud Drive). You can tap through on folders and files, and get previews up just like you can with local files.

The Files app doubles up as a media viewer, so one way you can use the new functionality is to bring along a USB flash drive filled with movies for your next trip and use the Files app to watch them without transferring the files over to your actual Apple device.

The file markup and sharing options appear as normal, and if you tap the menu button (the button with three dots on the right), you can then tag, share, copy, duplicate, delete and rename files, and more besides. It’s also possible to copy the file to your iPhone or iPad, via the Save to Files option.

You can tap and drag files to copy them, if you prefer, as long as the destination folder is on screen. Tap Select, meanwhile, and you can pick out several files at once for your copying, moving, deleting, or whatever else. 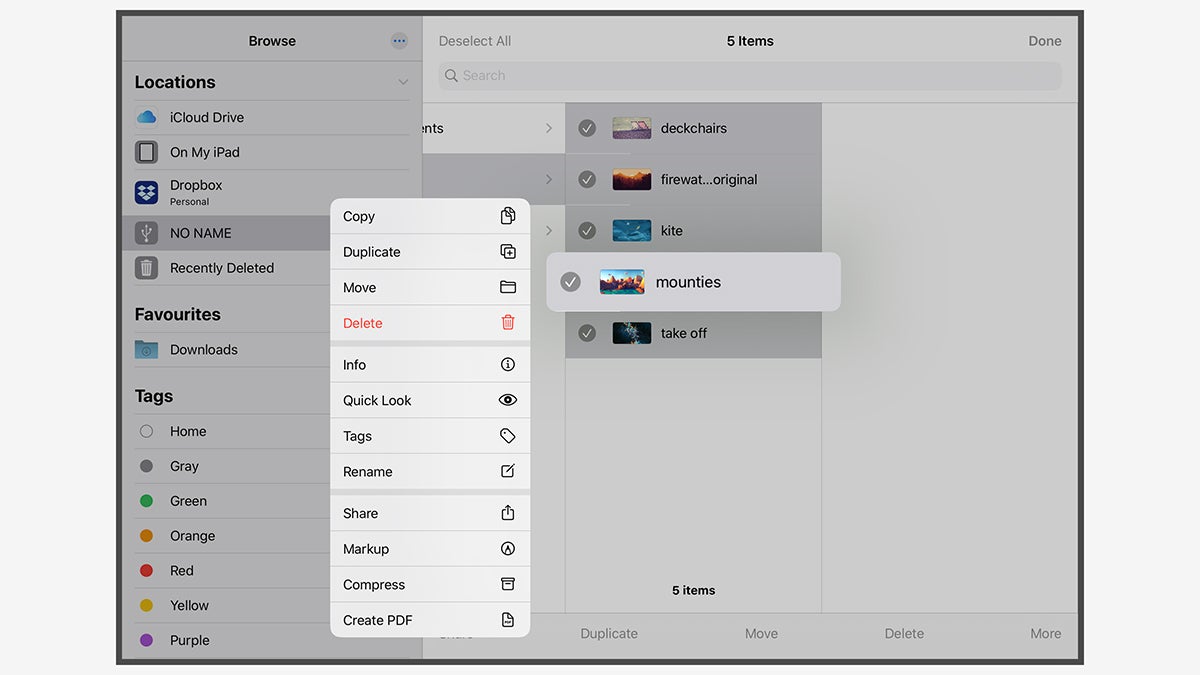 Really, anything you can do in the Files tab with the files on your iPhone or iPad, you can also do with files that show up on external storage devices. Perhaps of most use is the option to transfer files to and from your iPhone or iPad, but we can see plenty of people making use of the ability to quickly preview files too.

You can create new folders on your external drive too. Tap and hold on a blank area of the file browsing area, then choose New Folder. File searches can be restricted to a connected external drive too if needed, of course.

Not every file format is supported in terms of the previewing and opening parts of Files, but even if the file type isn’t recognised, iOS and iPadOS let you see the file listed in its folder (and you can move and copy these files as normal).

Remember that iPadOS now supports having multiple instances of the same app open alongside each other too. Files is one of the apps that works with the feature: Using Split View or Slide Over is another option you’ve got for dragging files between two locations (typically one on your external storage device, and one on your iPhone or iPad). 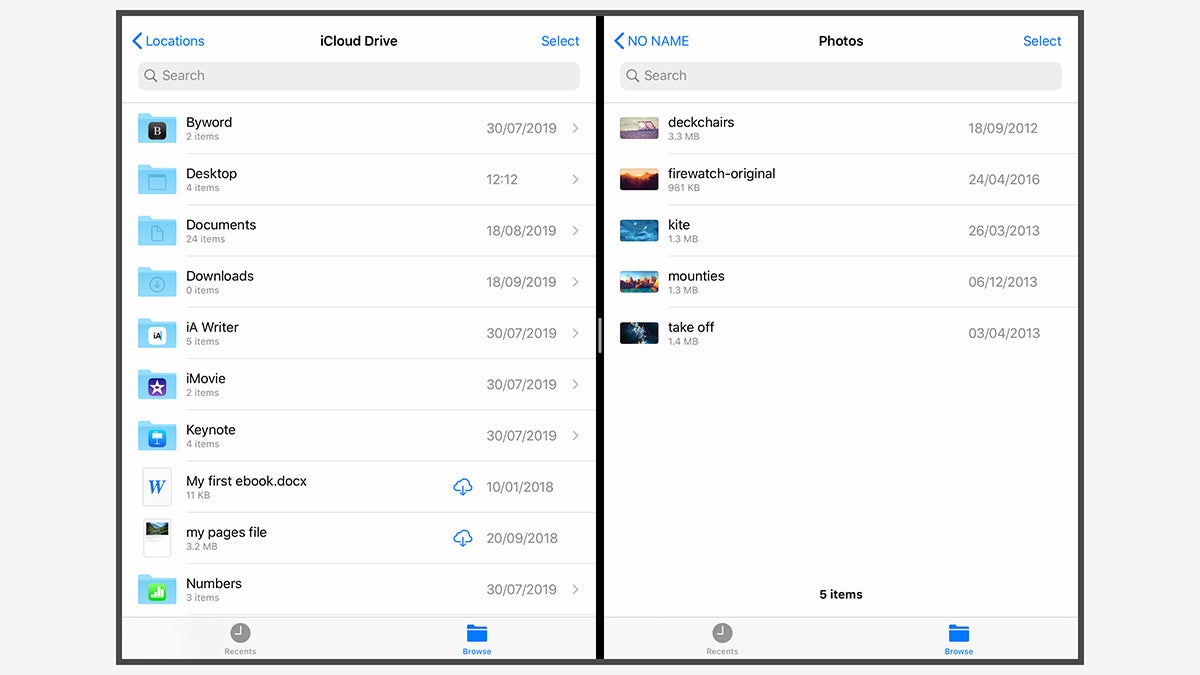 Some third-party apps support accessing external storage devices directly, so you don’t have to go through the Files app each time. Adobe Lightroom can get directly at your photos, for example, while Apple Mail can grab files to be attachments from external as well as internal storage drives.

The same goes for sharing and exporting files: Look for the Save to Files option when you’re exporting a picture from an image editor, for example, and you can pick the external drive as an option as well as the internal iPhone or iPad storage.

For a first step in supporting external storage, this is actually a very solid upgrade from Apple, the issues with adapter dongles and separate power supplies notwithstanding. There’s plenty of potential here in the future too, particularly if future iPhones and iPads join the iPad Pros in supporting USB-C.